In 1985 Hasbro released the flagship playset of the G.I. Joe line: the USS Flagg aircraft carrier. It remains an iconic piece and one that defines the Joe line by itself. One would have though, though, that Hasbro would have wanted to make the captain of this magnificent vessel a figure of magnitude equal to that of the Flagg. Instead, Hasbro offered a mold that is rather mundane and lacks the flair that should be associated with an undertaking like the Flagg. That isn't to say that Keel Haul is a bad figure, it's just that when taken against the backdrop of his release, it is easy to see why he's fallen by the collecting wayside.

On the surface, Keel Haul is a good figure. He featured a detailed sculpt, solid, realistic colors and an overall appearance that shows the thought put into his mold. However, for me, the figure just isn't that great. Perhaps it's the oversized head. Maybe it's the awesome flight jacket that has the zipper pulled down just a bit too far. Maybe it's the slightly cocked hat that always made me think that Keel Haul was drunk. Whatever it was, this mold, to me, just doesn't live up to the standard that is expected of the captain of Joe's most famous vehicle. Instead, he is a background figure at best. I've never really felt that Keel Haul stood on equal footing with other '85 vehicle drivers like Frostbite, Crankcase or Lamprey and those shortcomings were magnified by the nature of the vehicle with which Keel Haul was originally included.

As a kid, I desperately wanted the USS Flagg. It was the only toy released in 1985 that I did not get. I distinctly remember working a deal with my parents where they would buy me one if I could find it for the whopping total of $50. Well, in early '86, the local Toys R Us put their vast overstock of Flaggs on sale for $69.99. I called the manager to see if I could talk him into going down to $50 but he would not budge. Neither would my father and, to this day, I do not own a Flagg.

In my collection, Keel Haul has always played a background role. As a kid, I remember watching Robotech on TV and being interested in the Captain Gloval character. He always reminded my of Keel Haul and I based my characterization of Keel Haul on my perceptions of Gloval's character. As such, my Keel Haul was a more reserved and even mysterious commander. His true loyalties were never certain, though he never faltered in his duty to the Joes. I never really explored his characterization much beyond that, though. And Keel Haul disappeared from collection rather quickly. In more modern days, Keel Haul is mostly used as an adviser to the Joe commander. I use him mostly in a base setting with Hawk, General Flagg and Joe Colton. They are my core leadership group of the Joes. It doesn't get the Keel Haul figure much use, but at least gives him a displayable role in a command center.

Where Keel Haul finally did get use, though, was as a Cobra Naval Commander. I always felt there was a gaping in Cobra's organizational structure as they did not have a Naval Commander. As I began to expand Cobra into my generation of younger generals, I felt a Naval Commander was a must. However, as I formulated how I wanted my Cobra hierarchy to work, I realized that while these younger generals could have attained their positions at their tender ages, it was unlikely that a position of importance to an Island nation like Naval Commander would fall to anyone so young. That forced Halifax (the name I granted the character) into an older age bracket. How, then, would he fit in with the younger crowd who were to become the backbone of my Joe universe? The answer was as a mentor. Ultimately, Halifax was the philosophical bedrock for all of the beliefs of these young generals. Of course, in order to preserve the character, the only option was to kill him off in a noble fashion. Halifax's death cemented the loyalties of my younger Cobra's and remains the driving force behind their unbridled ambition. Keel Haul fits into this two ways: as the Joe counterpart of Naval success, but also as the visual model for Keel Haul. I liked the idea of dark, brooding captain whose face hid more than it revealed. The mental picture of Halifax is always similar to Keel Haul and remains the reason why Halifax is the only one of my created Cobras who has yet to have a figure assigned to him. Keel Haul is too much of a Joe to be transformed into a Cobra. But, no Cobra figure has a look close enough to Keel Haul to properly represent the idea of Halifax I have in my head. Maybe if I were a better customizer this wouldn't be an issue....

Keel Haul did appear again later in my collection. Some time in 1995, I found the '93 Keel Haul at retail. I purchased it and he became the de facto 2nd officer on my Shark 9000. (It really didn't matter that Keel Haul was an Admiral and Cutter a much lower rank. It was Cutter's boat and no other than he would be in charge.) I grew to like this figure just because it was one of the few I had available to me in those days. As such, I still have a soft spot for the '93 version and actually use him more often than I do the '85. I didn't make this character Keel Haul, though. Instead, he was a naval officer well below Admiral who was learning about fast attack boat combat. He was a competent fighter and troop commander, but still acquiesced to Cutter on all matters in regards to actual naval maneuvers.

This original version of Keel Haul was released with the USS Flagg in 1985 and 1986. After that, the figure was released as a mail away offer for many years and in many different premium offers. (It should also be noted that there is a variation between some mail in Keel Hauls and the Flagg version. Some mail aways are missing the white patch on Keel Haul's left arm and do not have the stars on Keel Haul's collar painted.) In 1993, Hasbro repainted the entire mold and released an updated Keel Haul as a carded Battle Corps figure. That figure was not one of the '93's who were repainted in 1994 because Hasbro sent the mold down to Brazil where Estrela released the mold in colors similar to the '93 Keel Haul as Anjo De Guarda. It is not known what happened to Keel Haul's mold from there. None of the figures in Anjo De Guarda's released wave have reappeared since their use in Brazil so it is likely that Keel Haul's mold is lost and not available for re-use. That, though, isn't a terrible thing as the mold has it's limitations and was nicely colored in both of its releases. As such, I'd rather see a repaint of another mold that only has poorly colored releases than I would another take on Keel Haul.

Back in the early days of Joe collecting, Keel Hauls were considered to be somewhat rare. As the collecting world matured, though, it turned out that the figure was actually fairly common. As Keel Haul was a mail in for years and years, many collectors had the chance to acquire one and the figure started appearing with more frequency on the second hand market. However, the mail away Keel Hauls did not include his pistol and many did not include a filecard. While Keel Haul's unique silver gun is not as rare as Heavy Metal's microphone, it plays in the same league and is not an accessory that is easy to find. For a time, the gun had its moment in the spotlight as the accessory du jour and complete Keel Hauls sold in the $50 range. But, that star has faded and you can now get a mint, complete with filecard Keel Haul for 1/2 that price without too much trouble. If you just want the figure, they can be had in nice condition for as low as $5 or $6. That's a fair price to pay for a figure whose use is limited like Keel Haul's is. But, it is also nice as you can spend your money for a nice Flagg and you won't have to stretch yourself even more just to get the ship's admiral. 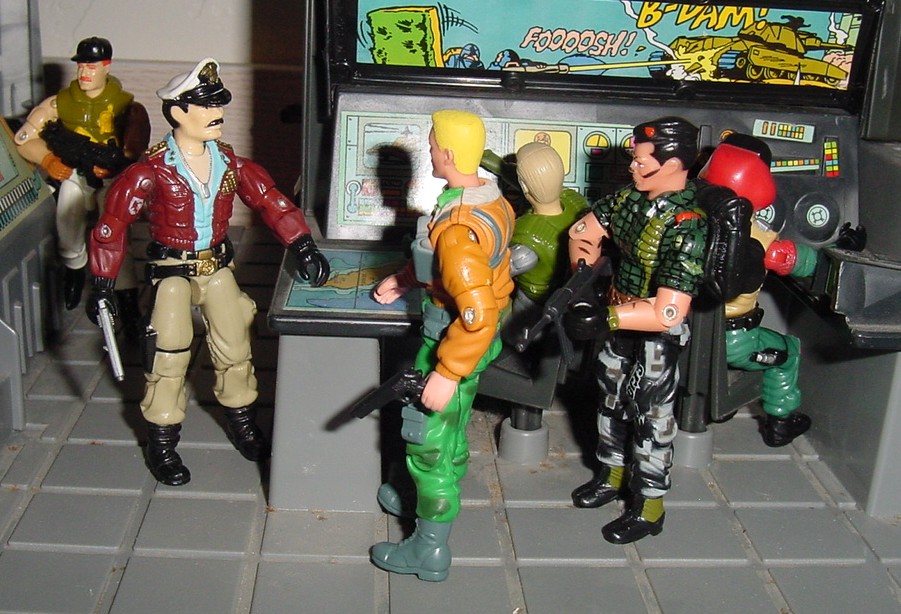 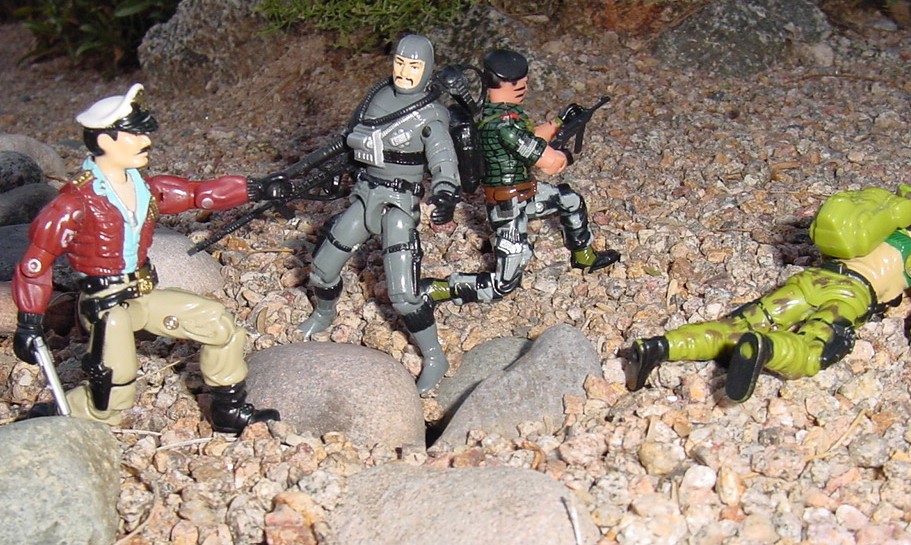 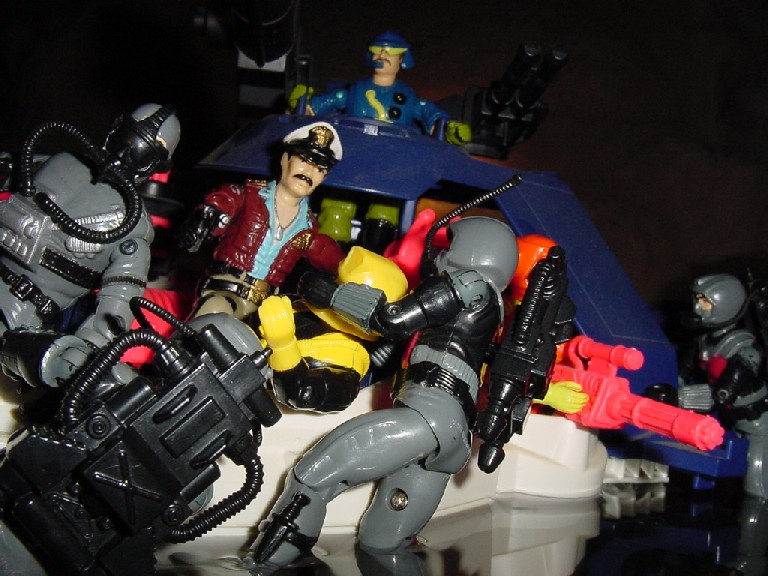 Posted by Robot_Sonic at 10:28 AM
Email ThisBlogThis!Share to TwitterShare to FacebookShare to Pinterest
Labels: 1985, Keel Haul, Vehicle Drivers