In 1998, the inclusion of Heavy Duty in the repaint line was something of a shocker. He was a minor character at best who really didn't have any fan following to warrant inclusion in such a small Joe renaissance. In 2006, it's hard to remember that 8 years ago, this was only the third time we'd seen Heavy Duty at retail. Since then, the character has become something of a joke to collectors as he was so heavily featured over more prominent characters in the modern Joe releases. The likely reason for this, though, has a lot more to do with the designers having fun than it does any Hasbro conspiracy.

While the Heavy Duty is a solid figure when taken on his own, he is somewhat bland and is probably a step back for the original paint job on the mold. Sadly, this 1998 figure was a harbinger of things to come as Hasbro spent 2000 and 2001 largely repainting figures in color schemes that were inferior to their original paint jobs on the molds. In fact, when taken with most of the 2000 and 2001 figures, Heavy Duty really blends into the see of olive and brown that was the hallmark of that period in Joe history. But, if you look at the mold a bit more closely you can see that Hasbro put more effort into this figure than they did most of the post-ARAHC figures. The figure features a full 7 different paint colors. The only problem is that they are sparsely applied and it is easy to miss this amount of detail against the backdrop of the figure which is predominantly brown. The figure's belt buckle, grenades and chest knife are all painted to make them stand out. It is the paint on the little details that often differentiate a great figure from a mediocre one. Simply compare the post '02 convention figures against their retail counterparts. The differences are slight, but the manner in which they are applied is what separates the quality of the figure types.

The Heavy Duty mold was only released by Hasbro. After the 1991 figure disappeared from shelves, he was not seen again until 1998 and then again in 2000. (The mold was, along with most of the other '91 figures, released in China.) While the character of Heavy Duty was to become a mainstay of the modern Joe line, this mold was not. Instead, it has only seen moderate use since 2000 as parts amalgamations of a few high priced Master Collector figures. This isn't a terrible thing as both of these Heavy Duty versions are decent figures. But, I could stand to see a newly frankensteined ARAH style Heavy Duty that used the original head but gave him a newly put together body that would give the character more depth in ARAH form.

In my collection, Heavy Duty is mostly just a minor player. He appears as a gunner from time to time but spends most of his time as a standard infantryman. He looks good with Leatherneck's M-203 and Big Bear's backpack. His militaristic color scheme allows him to blend into the background and provide firepower when his team needs it. I also often use him as the gunner on my various vehicles that feature mounted weapons. As such, he really doesn't have much of a role. Really, I look at the character as largely a Roadblock rip off. There really is no use for Heavy Duty when I have Roadblock figures readily available. As a background player, though, he is nice picture filler.

I guess that's not much to say about a figure. But, one of the hallmarks of the Joe line was the strength of the supporting cast. While everyone had to have the major versions of major characters, it was the line's depth that kept it relevant for more than a decade. Every kid could have a different favorite and if someone else picked your favorite character first, it was likely that that were was another, lesser character that was similar enough to your favorite for you to salvage the play session. While collectors have become largely burned out on the major characters, the reality is that Hasbro has been very good at ensuring there was a steady supply of second and third tier characters available in their modern offerings. While I have enough Duke and Snake Eyes figures to last the rest of my life, I appreciate the fact that I was also able to acquire versions of Steeler, Barricade, Flak Viper, Mirage, Big Ben, and any number of other, more obscure characters that have helped diversify my collection. There is a Joe figure for any situation and that is one of the reasons why the line has been so enduring.

Like many Joe figures, this version of Heavy Duty was modeled after a real Hasbro employee: Lamont Morris. (As an interesting note, Hasbro also modeled the 2006 Endor Rebel Trooper after Lamont, making him, as far as I know, the only real person to appear in both the Star Wars and G.I. Joe 3 3/4 inch lines.) As such, it is likely that Heavy Duty's more prominent role in the modern Joe line is due to the designers at Hasbro having some fun and honoring one of their own. Heavy Duty is just one of many Easter Eggs hidden throughout the Joe line that are homages to the toy creators who made the line possible.

This Heavy Duty figure was released twice, though both times were with the high priced (for the time) and oft despised MOBAT. As such, you don't see this figure available like you would expect. Most collectors acquired their one version and moved on. So, if you're in the market for one, it may take a bit longer than you would otherwise think to find a nice version of the figure out there. When you do, though, he will not be high priced. Dealers will probably sell him in the $7 range while an online auction site might let you get one for half that. At that price, this is a good figure. He is a little dark, but offers something different enough from the first version that he's worth having. Given my preference, though, I'd spend about the same amount and just buy the original figure. He's got better colors and includes some interesting accessories. That way, you get the character in his best colors right away and can move past the other versions. 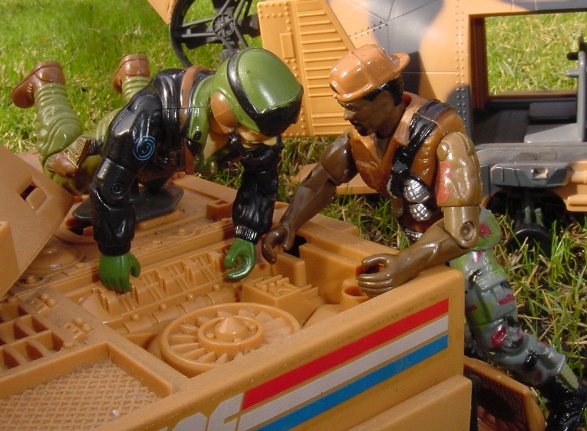 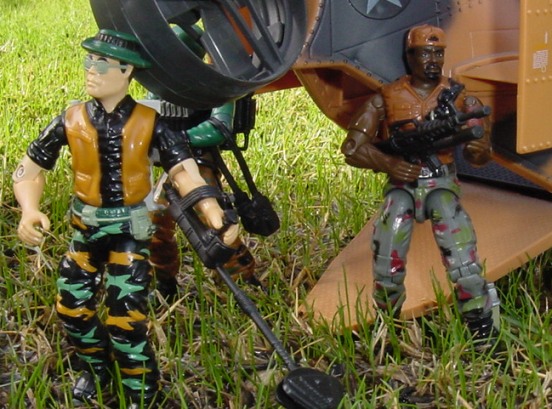 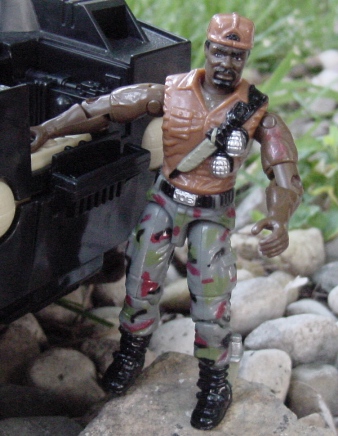 Posted by Robot_Sonic at 11:09 AM
Email ThisBlogThis!Share to TwitterShare to FacebookShare to Pinterest
Labels: 1998, Heavy Duty, Retailer Exclusive