OK. I will admit it. I'm not a fan of the 25th Anniversary Joe figures. I've had no interest in them from the beginning. Not because they were, necissarily, bad toys. But, I am an ARAH Joe purist at heart. I have over 2000 ARAH style Joes in my collection. I do not find either the JvC style figures from 2002-2006 nor the 25th Anniversary style figures to be compatible with those originals. As such, I have no interest in starting what is, to me, an entirely new toy line. I have enough to do with ARAH style Joes.

That being said, I also thought that Hasbro's strategy of redoing the line with a more modern action figure was sound. I still don't think the line will last 18 months, but that has nothing to do with the quality of the toys and everything to do with the state of the marketplace for military toys. Largely, though, I simply avoided most discussions regarding the 25th Anniversary figures. When pictures of them first surfaced, I was underwhelmed. The figures looked OK, but they simply didn't wow me the way something that had 25 years of toy making advances should have. There were neat features to the figures. But, to me, they still looked far too animated and caricaturish for me to be interested. Still, they held some appeal as they took many of the complaints that collectors had about the most recent figures and worked to address them in some way.

As the figures began to appear in stores, I took a look at them. I will admit feeling a bit of nostalgia when I first saw the carded Wave 1 figures hanging on the pegs. Seeing the card art brought back memories. I picked up a Flint figure and thought about buying it as I'm a big fan of the character. But, after I looked at it, I still thought the head looked goofy, the obvious chest joint was too pronounced and that the figure was, overall, too gangly. Plus, I couldn't get past the fact that Hasbro edited out Flint's classic shotgun and replaced it with the inferior "modern" version that matched the toy. When Wave 2 made it out, I saw the Beach Head figure and was impressed by the level of detail in his accessories. But, the figure still did nothing for me. Finally, today, I broke down and purchased the Cobra Legions 5 pack of figures. Now, to be fair, I did this to sell off the army builders. But, the result was the first 25th Anniversary style figures that I've opened.

My first impressions of the figures in hand were dead on with my expectations from photos. Visually, they have their appeal. But, overall, they are still not Joes to me. The Cobra Air Trooper has one benefit that many Joes do not: his chest is covered with web gear that disguise the horrid chest joint. Granted, I know this allows for greater posability. But, to me, the added articulation is not enough to make up for the aesthetic crime that the joint poses. Supposedly, this is something that will be looked at in later waves. Plus, it is really only an issue on certain figure. On some figures, it can be disguised by web gear or simple figure design (like the armor joints on the Super Articulated Clone Trooper that features a similar chest joint) but, it still poses a problem for me on many of the figures I've seen.

As for the figure at hand: the Cobra Air Trooper, he is nicely designed. He features a blue Cobra jet pack and gun that is obviously based on the original JUMP. The pack has painted highlights and features a prominenty Cobra sigil on the back. The back peg has been modified to fit the new style of figures, so the accessory is useless for any vintage figures. The figure also features a removable helmet that is identical to the head used for the Gas Mask Troopers in 2006. It is so well done that I didn't know it was removable until I found the spare Cobra Trooper hat that was hidden in the battle stand packet underneath the packaging. So, this figure can be the Air Trooper or you can change his helmet, hang up the jetpack and you have a full fledged Cobra Trooper that is very similar to the standard Trooper included in the set. So, that's a bonus for army builders. (See the comparison photo at the bottom of the page.)

This figure is nicely accessoried with the web gear, knife, flight helmet, jet pack, hose, jet pack gun, standard battle helmet, standard rifle and figure stand. Frankly, that's a ton of stuff for a $5 figure. Plus, the accessories make sense. That alone was my single greatest gripe regarding the ARAH re-releases of the past few years. The accessories were not only poor, they didn't fit the figures with whom they were released. Not so, with the 25th figures. In fact, every figure in the 5 pack features accessories that fit the figure in both the modern and historical senses. That's huge progress right there and one of the things that shows that Hasbro finally did their homework on a Joe line. These accessories are all new and well done. The rifle is heads and shoulders above much of the new sculpt weapons released between 2002 and 2006. It harkens back to the vintage line in terms of quality.

As for the figure itself, it isn't bad. Aside from the chest joint, I've had issues trying to get the figure to hold his gun in any pose that isn't awkward. The design of the hands and arms just makes it difficult for the figure to be posed in many standard ways. Standing at attention, this guy would look good in multiples. But, for those who like to use their figures in more imaginative ways, the hand/arm setup is somewhat limiting. The huge diaper crotch also prevents the figure from sitting in any natural way. Supposedly, that is an issue that will be corrected in later waves though it is unknown if Hasbro will go back and repair the original molds that were affected. Truth be told, I don't miss the O-ring on the figure. The waist and leg joint is different, but it still works. Once the crotch pieces are fixed to allow the figure to sit, then I think all will be well.

The figure really harkens back to the classic look of the Cobra army. The blue and yellow is closer to the look of the comic pack figures than it is the vintage action figures, but it is still the look that many associate with Cobra. That's a good thing as it makes the figure instantly recognizable to any casual passerby who is within the age demographic to remember Joe. The figure also fits with the Cobra Trooper from the set so you can have some similarity within your army without it all being the same figure over and over again. The other nice thing is that Hasbro deviated a bit from its formula with the Joe line. So far, almost all the 25th figures have been based on their vintage counterparts. This is a great way to get fans back into the concept, but there needs to be something new for the line to last long term. The Air Trooper works because he integrates with the other army builders in terms of color and mold. But, he is still something new that we haven't seen before. It's not risky like a Venomous Maximous, but it keeps the line from becoming nothing more than a stale remake of decades old favorites.

In the end, I am still not a convert to this style of figure. I think they are decent toys. But they are not anything in which I will ever be able to generate interest. My main issue with these figures, though, is that had the level of thought and care been put into the design of the ARAHC back in 2000 and 2001 or even the JvC modern collection in 2002, I think we would be in a much better place overall. I think it's great that Hasbro finally paid some attention to the Joe line and the mythos that surrounds it. Honestly, had these figures been released in 2002, I would have been all over them. But, after the messy way the original new sculpt Joe line turned out, I am too burned on anything other than my classics. Unfortunately, that leaves little for me to collect these days. However, if the few outlets who still cater to ARAH style fans take notes from the 25th Annivesary and make figures like this Air Trooper available in ARAH form, then everyone wins in the end.

This figure is just shipping right now. Hasbro also announced at the convention that this figure would be available on a single card early next year. So, army builders will have plenty of time to stockpile all the Air Troopers they want. We've also seen a couple of trends in the 25th Anniversary line already that tell me collectors aren't going to have issues finding the figures they want. First, Hasbro is repacking figures from earlier waves into new cases. So, even if you miss a figure, you should have a shot at it again. Second, Hasbro is working with retailers to get exclusive army builders out to collectors en masse. Let's face it, we've already gotten the Cobra Officer and Trooper at retail. The Trooper in a 5 pack. The Trooper in another 5 with this figure and a grey officer modeled after the Stinger Driver. Plus, Hasbro showed at the convention that Toys R Us will have an exclusive 5 pack of Trooper and Officers and another store will have an exclusive Hiss with a recolored Trooper. So, in the first 50 figures or so, we'll have seen the Trooper and Officer at least 8 times. That's not too shabby when nearly 20% of the line is dedicated to 2 popular army builders. 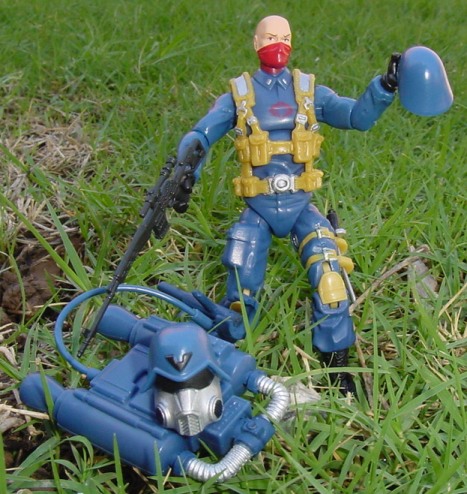 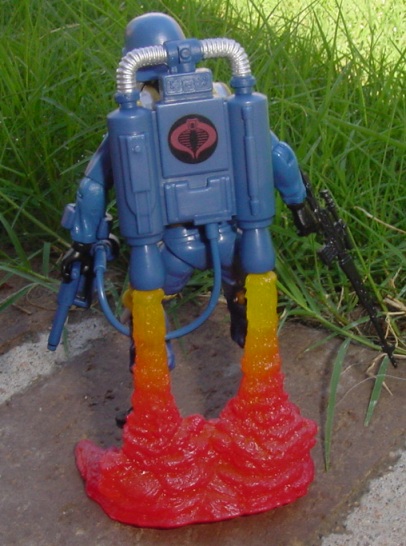 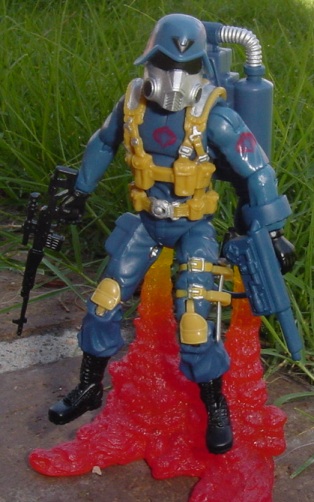 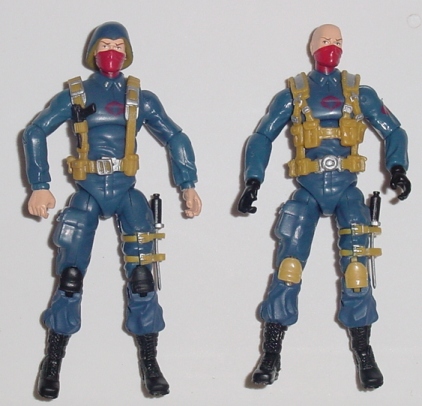 Posted by Robot_Sonic at 9:38 AM
Email ThisBlogThis!Share to TwitterShare to FacebookShare to Pinterest
Labels: 2007, 25th Anniversary, Cobra Air Trooper