Sometimes, the original is simply the best. In the case of the Cobra Trooper, there is an understated excellence to the figure design that simply was unsurpassed in the subsequent history of the line. Sure, other figures had more detail, better accessories or more intricate paint applications. But, none were so simply effective at portraying their purpose than this original Cobra Trooper. It remains the iconic look for the basic Cobra...even if it is not the combat ready outfit that evolved to the Viper. It features the faceless enemy clad in a dominant dark blue color using Soviet weapons during the height of the Cold War. It was the perfect enemy to the group marketed as the Real American Hero. Today, the figure remains among the most popular and well liked molds ever produced. It has remained relevant while most of his contemporaries have faded into obscurity by their later incarnations. The original Cobra Trooper personified the evil of the Cobra organization and conveys the incredible danger this group poses to the free world.

My first encounter with this mold was in the summer of 1983. I was just getting back into Joe. Naturally, my focus was on acquiring the Joe figures who were released that year as well as the Cobra characters. A neighbor of ours, though, had both the Cobra Trooper and Cobra Officer. Being young and not knowing the difference between the 2, I took the Cobra Officer with his AK-47 to be the more standard Cobra soldier and thought the trooper to be the more elite since he had a sniper rifle and a much more intricate mold. I was a bit dismayed to learn the opposite was true but still feel that the trooper should have been outfitted with the AK as that was the more infantry related weapon that the standard troops would have carried. To this day, it doesn't make much sense for an infantry soldier to carry a sniper as his default weapon. However, the look of the Dragunov in the Trooper's hand is one of the indelible images of the line and I simply can not use any other weapon with these Troopers.

This figure, though, was not added to my collection until 1985. One summer day I went to a Kohl's store in a mall and found this figure and a Cobra ASP. These were not toys I normally saw at the local Toys R Us and Children's Palace stores. As such, I bought them both with my lawn mowing money, took them home and quickly made them central to my Joe world. Cobra now had a trooper that was capable of overwhelming the Joes while the ASP made Hiss tanks that much more dangerous. In this role, the figure thrived. By late '85, my original was heavily worn and I had broken his thumb. By '85, it was rare for a figure in my collection to get that type of use, but it showed how central the Trooper was to my collection. Unfortunately, when I went to replace the figure in 1986, he was gone from retail for good. This didn't much matter, though, as the Viper was released that year and it was an adequate replacement for this original figure.

Today, I actually prefer the old blues as my standard Cobra infantry forces. There is something about the simplicity of the blue jumpsuit that seems more Cobra to me. I still see Cobra as that underground organization shown in the early days of the comics rather than the full blown military-industrialist nation with a defense budget that would make the Pentagon jealous. I think that's why I prefer this look for the standard Cobra soldier. It isn't full of expensive, technological gear and perfectly portrays the wearer as a terrorist not be trifled with. Of course, I prefer the 2004 version of this figure just due to the fact that they are more pliable, newer and more readily available. This original figure, though, remains a personal favorite and one that still gets taken out from time to time. I prefer this original mold to the newer incarnations when I'm pairing them with the original versions of Major Bludd, Destro, Firefly or Cobra Commander. The Trooper complements those classics very well and always makes for a great photo when they are used together.

The Cobra Trooper mold is incredibly detailed. Originally conceived in late 1981, the figure was titled Cobra Commando or Trooper and features: a modified Russian Dagunov Sniper Rifle, a bayonet, a grenade launcher on his chest and 2 grenades for that launcher on his left arm. The most interesting item, though, is the piano wire that is sculpted onto the figure's right arm. This is a minor detail and one that many collectors simply overlooked or misinterpreted over the years. However, it is a ruthless reminder of the villain this figure is meant to portray. It also shows just how terrible the original designers wanted this character to be. There was no grey area as to his motives. This was a person of pure evil and the type of villain that would be difficult to integrate into a children's toy line today.

Take this figure, paint him brown and remove the mask and you have a reasonable portrayal of a Nazi. It is likely this was the intention of the designers. The Nazis are the one group whose symbolism marks evil and through the '80's, this was a common representation of evil in many mainstream properties. While Cobra couldn't be Nazis, the early visualization of the Cobra organization was very Nazi-esque. Many troopers were drawn in the early comics with buzzed blonde hair. The Cobra salute was eerily similar to the Nazi salute. The Cobra parade ranks that were shown in the first comic issue conjure up images of Nazi rallies. All of this was done to adequately portray Cobra as evil. It made the Joes that much greater heroes to be battling a terror that was reminiscent of the worst evil the world has ever known. As the line evolved, this imagery was downplayed and slowly went away as Cobra became more diverse in terms of colors, uniforms and characters. However, those early images were what defined Cobra to me. The fanatics who stayed aboard the doomed submarine in issue #8 of the comic showed the type of devotion that a mixture of heavy propaganda, outright brainwashing and intense fear of failure. I viewed Cobra Commander as a charismatic leader who could command this type of loyalty. As Cobra grew, this became harder to maintain in the comics. But, to me, it is the lasting image of Cobra and the basis for how I see the entity today.

In my collection, the Cobra Trooper is the basic backbone of the Cobra army. To me, these guys are simply the "relaxed" uniform for Vipers and I view the Troopers and Vipers as interchangeable. Recently, I've been on a heavy kick for Joe figures made prior to 1986 and, as such, this Cobra Trooper has become more central to my collection. Mostly, though, I still use the 2004 version of the Trooper as my basic grunt. But, that's mainly because I have three dozen of them and they aren't as brittle as this figure is. However, as I set permanent displays, I find that the original Cobra Trooper is my preferred version. The added detail on the arms simply makes this figure stand out and places him above his subsequent incarnations. One of the things I now lament is not buying many more of these figures when they cost about $12 each back in the late '90's. Instead, I was spending my money on newer army builders. While those new figures have seen price gains equal to the Cobra Trooper, I find that I don't have as much need for 6 Desert Scorpions as I would for 2 additional troopers. Oh, well.

This mold has a long and distinguished history. So much so, that it is likely that Hasbro actually had more than 1 Cobra Trooper mold in their possession. The straight arm figure was released in the US. But, from there, that mold went to Argentina and then on to Brazil. While those figures were in production, the swivel arm Cobra Trooper was being released in the US (the Trooper was the rare 3 year release as he was produced through 1985, though in lower quantities in the final year) and Europe. In 1989, Hasbro dusted off the swivel mold again and released it in the US as a member of Python Patrol. (It should be noted, though, that this figure was actually named Python Officer.) That mold then surfaced again in Brazil around 1993 when the Python colored Trooper mold was released as Vibora. After that, the arms were never seen again. In 2004, Hasbro actually recast the torso for this figure and released it in the TRU exclusive set. Later in '04, though, the original head and torso were used for the Comic Pack Trooper. This mold was used again for the Night Watch Trooper in 2005. Following this mold around, it seems likely that the entire original swivel mold was lost in Brazil in the early '90's. Hasbro wanted to get the figure out to collectors, though, so they remade it. However, after that, they found at least part of the original mold...likely just the head and torso. This allowed them to reuse those pieces, only now combined with other arms and legs as the original legs were either lost, misplaced or simply deemed insufficient. There is no trace of the original swivel arms which is why I suspect they were lost in Brazil.

At this point, though, I don't think there is much reason for a return of this mold. While I would, personally, like to see a Cobra Trooper painted in grey to match the Stinger Driver or in crimson, I don't think that these are figures whose absence I would lament too greatly. The 2004 Infantry Team put a lot of high quality Cobra Troopers into the market and that was only augmented by the comic pack Trooper (many of which were clearanced for $5 each....) and the Night Watch (which lingered at retail for nearly a year...). There are always collectors who missed out on these figures and I'm sure that many of them would like to see the Trooper return. However, as ARAH releases are sporadic at best these day, each mold that is released takes on greater importance. As such, I don't want to waste a valued mold slot to just get a repainted trooper. There are many other figures I'd rather see done first.

Back in 2001 through 2003, a mint, complete Cobra Trooper was going to run you a minimum of $25. Incomplete and off condition figures would still go as high as $20. After Hasbro released the Cobra Infantry Team in 2004, though, secondary market prices on the Cobra Trooper fell to around the $15 mark. Today, that is about the price you'll pay, though, occasionally, you'll still see one crack the $25 barrier (usually, a perfect mint figure that is complete with filecard will reach this price). At the cheaper price, though, these guys are a no-brainer. Given the choice of two 2004 Troopers or one vintage Trooper for the same price, I'll take the vintage every day. This is a figure that simply must be army built. Of course, every other collector knows this, too. But, as Hasbro has offered many retail alternatives in recent years, many collectors are out of the market for the vintage figures. This keeps prices below where they should be for a figure of this rarity and quality. I just hope they stay that way for a while. 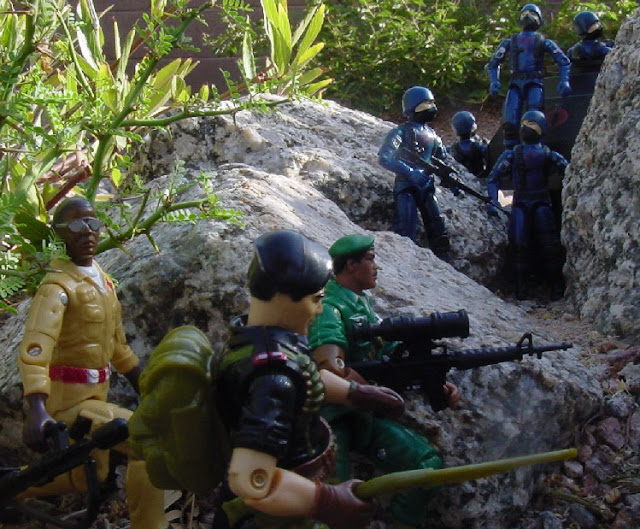 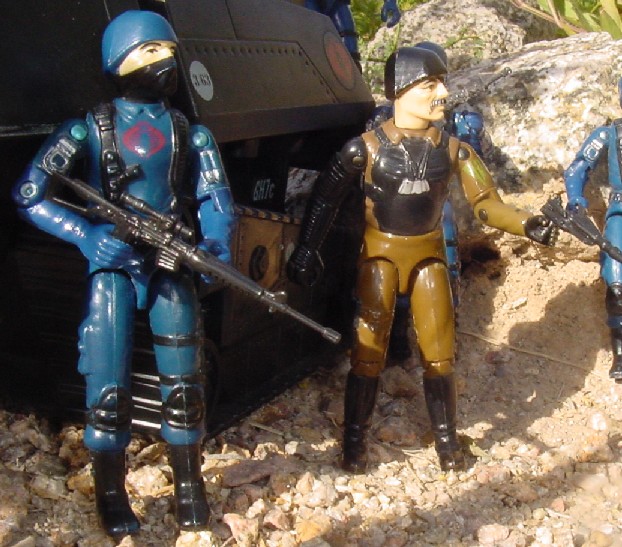 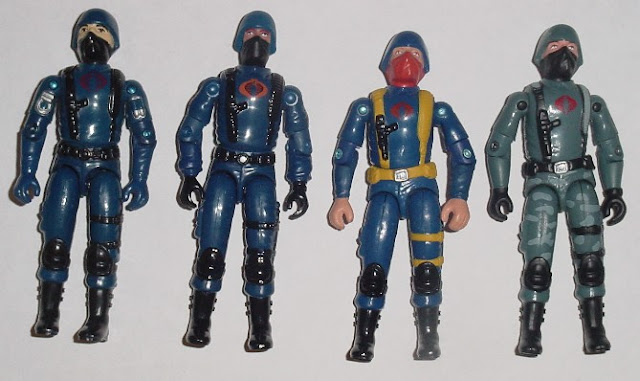 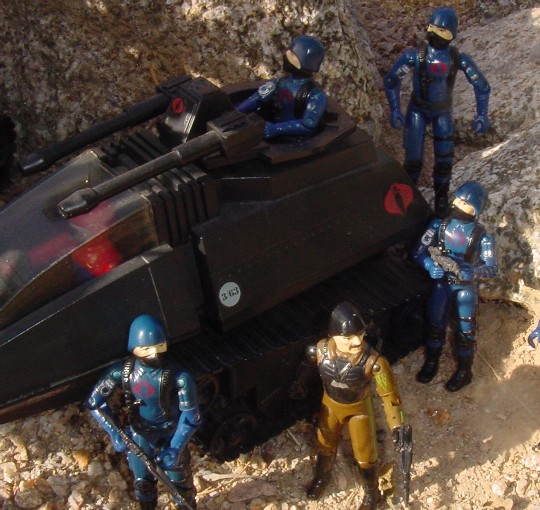 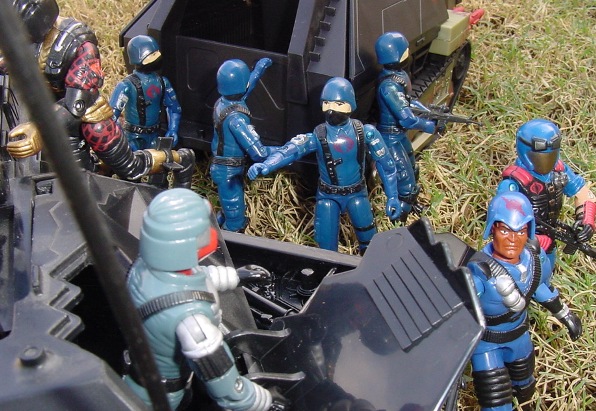 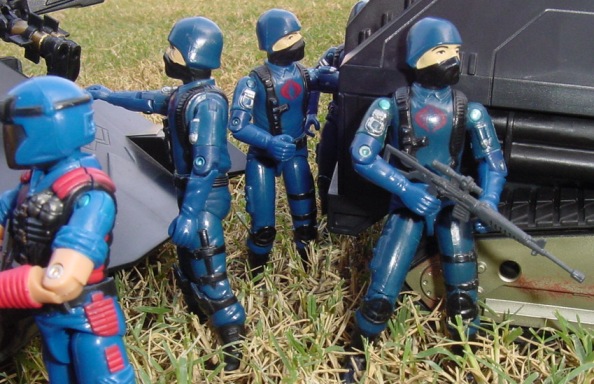 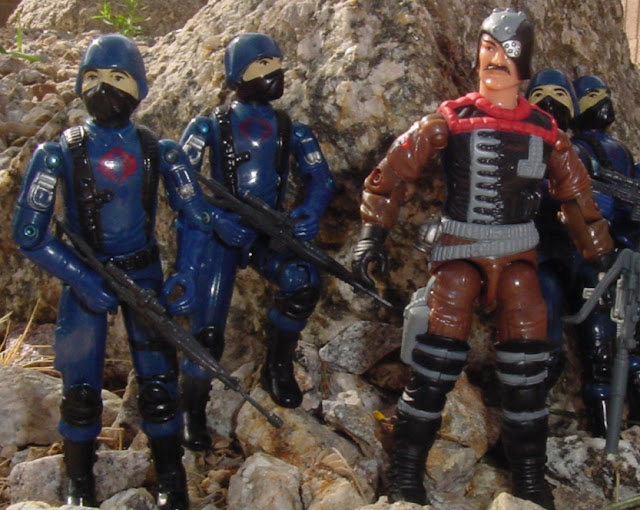 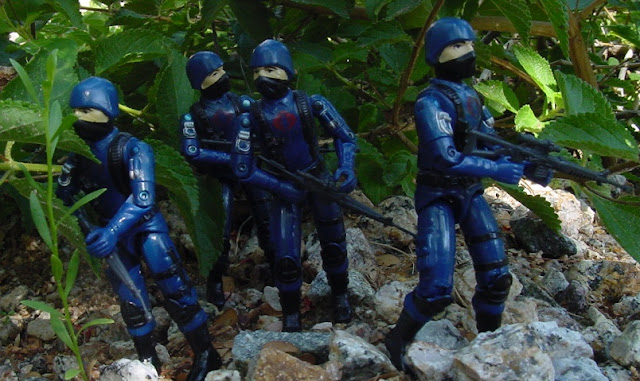 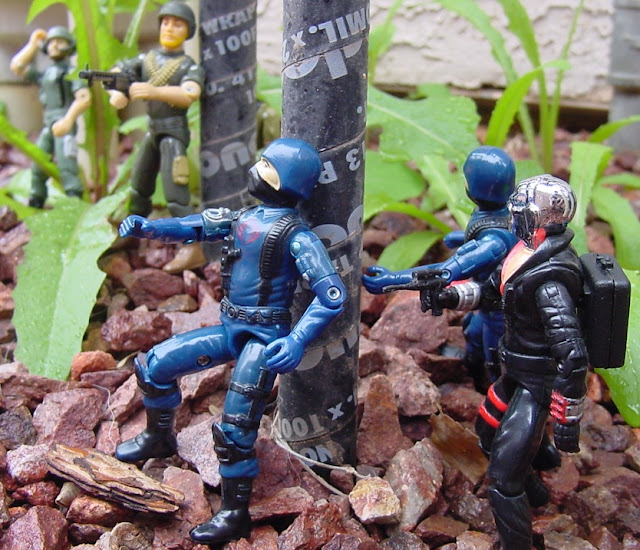 Posted by Robot_Sonic at 10:11 AM
Email ThisBlogThis!Share to TwitterShare to FacebookShare to Pinterest
Labels: 1983, Cobra Trooper