It's hard to imagine a time when collectors were excited over the prospect of a newly repainted release of the SHARC. But, back in 2001, new Joe product was so sporadic that we were keen on pretty much any toy that had a Joe label on it. In time, of course, this excitement abated and collectors were left with a couple of retail dud vehicles. But, unlike the Flint from the Desert Striker or Cutter from the Attack Boat, the Sub Viper was actually a figure that collectors wanted: even if his vehicle was not.

The Sub Viper is just a repainted Sludge Viper mold. Instead of the neon yellow and blue, though, the figure is cast is a more subtle silver and watery blue. It is a nearly perfect match for Lamprey figures whether the original or the 2000 version. This updated color scheme shows the potential of the mold. But, like the Sludge Viper, the Sub Viper is still a bastion of unrealized potential. While the base colors on the Sub Viper are excellent, the details of the mold are still left unpainted. As such, there is a wealth of small details that could easily be painted to bring whole new life to the mold, even if the base colors of the Sub Viper were changed only slightly. While the few paint masks that are on the figure work well, you are left with a sense of incompletion as the figure could have 2 or even 3 more paint masks that would have really brought the mold to life. But, in this case, simple still works considering the figure's purpose.

When the Sub Viper was released, it offered great hope that Hasbro was going to spend a lot of effort recoloring the mass of '90's molds that were poorly colored the first time around. The repaint line offered a great chance to bring back many of those spectacular molds: only colored right this time around. But, that was not to be. While Hasbro did offer us some great new takes on poorly colored molds, they did not do it enough to spark much interest in the repaint line. Master Collector has done a better job of this (especially more recently) but lacks the sheer number of releases that would showcase some of the molds that have so much potential. Now that the line has largely moved on from ARAH style figures, we are still left with a great void in the vintage style line. There is still so much that could be done to create some figures for the ages. Hopefully, the greatly diverse and inspired 2007 Convention set will be a harbinger of things to come with the few ARAH style figures we still do see. But, figures like the Sub Viper are easier to appreciate 7 years after their release date since they were such an anomaly in the modern line.

As a character, the Sub Viper isn't much. The filecards from the '00-'01 era are simply horrible and are not a basis for any of my characterizations. I use the Sub Viper as replacement for the Lampreys. I've always felt that the Lampreys were too cool to only be used as the pilot of a highly specialized vehicle. So, instead, they are the backbone of the Cobra maritime forces: basically the equivalent of Vipers but in maritime settings. As this leaves the Moray without a dedicated pilot, the Sub Viper is able to step in and fill that role. The Sub Viper is a fully trained Lamprey who is on his way to one day becoming and Eel. Learning to command a Moray is just another step to becoming one of the Cobras elite troopers.

Beyond that, the Sub Viper isn't all that useful. He isn't a figure that is easily adapted to other environments (though you could use him a Cobra firefighter or astronaut) or other specialties. But, he fits his assigned role so well that you can forgive him his limitations. The figure is simply a perfect fit for the Moray and the Lampreys. He has the classic colors that hearken back to the vintage line (which was one thing the A Real American Hero Collection figures of '00 and '01 did very well) but a mold that isn't overused. The result is a great way to update a display piece and give it more depth. For years I had several full crews of Lampreys for my Morays. Slowly, the gunner positions were taken over by the '00 Lamprey just to give the scene more depth. Now, the driver and co-pilot are Sub Vipers and the original Lampreys man the back gun stations. It's a great look that keeps uniformity while still offering diversity. In that regard the Sub Viper succeeds marvelously.

The Sludge Viper mold was only used by Hasbro in the US. (A few of the Sludge Vipers were carded by Hasbro for sale in other, Asian countries, though.) After its use for the Sub Viper, the mold has not been used again. Hasbro certainly has access to it and could pull it out at any time. But, at this time, we are left with only the Sub Viper as a sensibly colored alternative to the Sludge Viper mold. Personally, I'd love to see the Sub Viper return in some soft of set with a definitive Lamprey, a new Eel or Undertow and lead by a repainted Decimator. All those molds are available and could be easily used. The fact that Hasbro never used the Toys R Us exclusive 6 pack format to release a Cobra maritime set is one of my great regrets of the modern line.

Time has afforded us much perspective on the Joe line. If you look back at the figures released between 2000 and 2001 in the A Real American Hero Collection, you don't find many duds. But, you don't find many superstars, either. While I look back on that era of figures fondly, I also don't count more than one or two of them who are used in many of my dios. Some of these figures (like Firefly) were eclipsed by later releases. Others simply weren't significant upgrades over their original figures. And, most of the new characters were flat and didn't excite much more than camp value from their personalities. I look at those years largely as filler figures. They are what a collection needs to give it some diversity: but not the foundation upon which you would build something new. At its core, I think that the is the reason the ARAHC ultimately failed. For you to become invested in the toys, you had to have a vintage collection to augment them. For collectors, that worked. For kids, though, it was too difficult for them to get excited about something that required buying old, second hand toys in order for them to fully appreciate what the line had to offer. Hasbro fared better with the new sculpts, but still took long to finally get the core figures to market. With the anniversary figures, they have corrected that problem and the fundamentals of any collection have been largely released in the first year. I often wonder what would have happened if the ARAHC had been done differently and the first Toys R Us exclusives from 1997 had been the molds and colors first conceptualized. I don't know if we'd be in a different place these days, but we'd have certainly gotten some different figures in the early days of the relaunch than we actually did.

A couple of years ago, Sub Vipers were pretty hard to find on the second hand market: despite the fact that the vehicle was pretty much a retail dud was was widely available for well over 6 months. Typically, the figures ran about $10 each. As such, it didn't make much sense to buy the figure alone when you could buy the whole vehicle for the same price. Around 2004, though, a large supply of Sub Vipers appeared in Asia. This allowed many collectors to army build the figure in an economical way. For a time, you could get a Sub Viper for around $6 or so. That sated some demand for the figure, but prices have since risen closer to the $8-$10 mark. If you want the filecard, that's a bit harder to come by and most dealers will charge a premium for it. But, for the purposes of army building, Sub Vipers are slightly cheaper now than they were a few years ago. That's a good thing as the Sub Viper is a great complement to Lamprey armies and makes for a perfect crewmember of the best Cobra aquatic vehicles. He works with Eels and can be used underwater or on the surface. The Sub Viper is just a solid figure that is one of the few examples of how a horridly colored figure from the '90's can be made into something great with just a little effort. 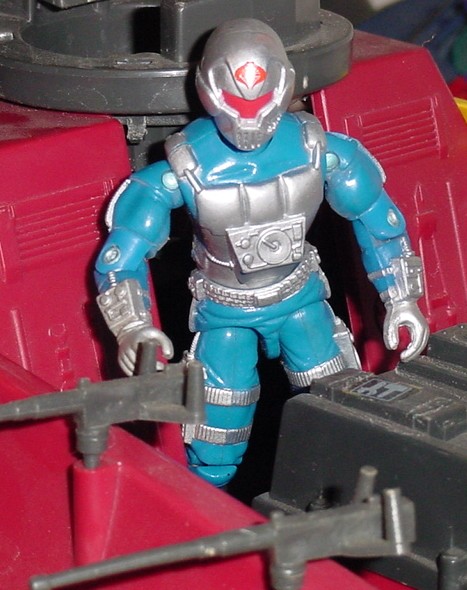 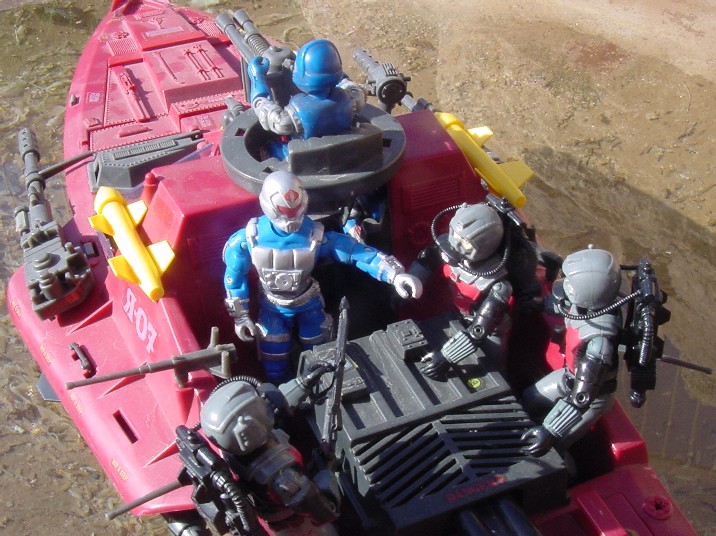 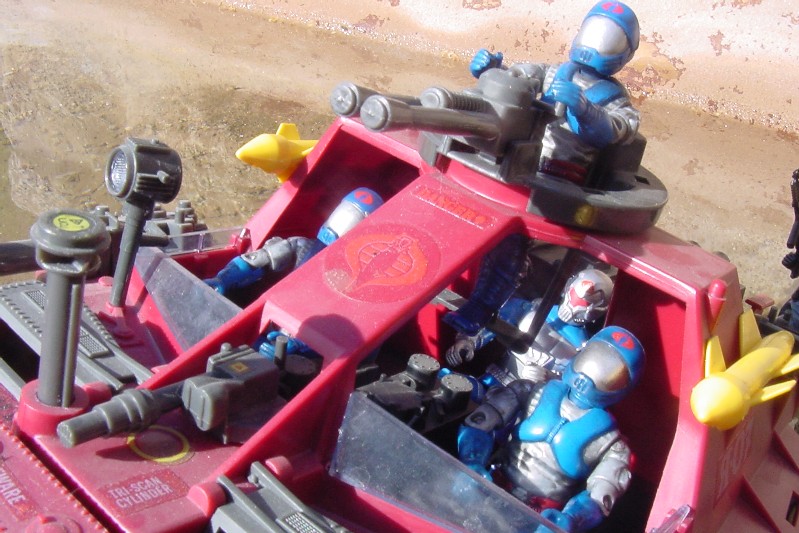 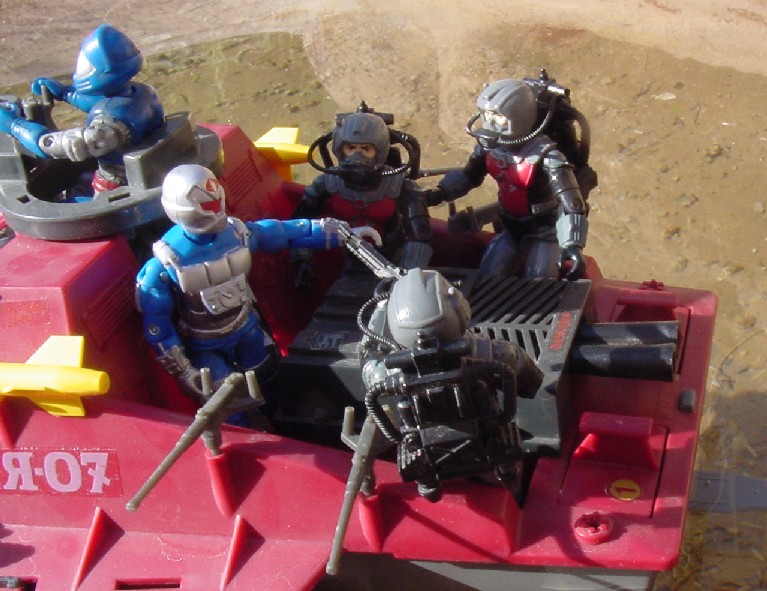 Posted by Robot_Sonic at 10:14 AM
Email ThisBlogThis!Share to TwitterShare to FacebookShare to Pinterest
Labels: 2001, ARAHC, Sub Viper, Vehicle Drivers