If you look back at the years from 2002 through 2005, you see that during those years, Hasbro simply inundated the market with Joe releases. In each of those years, there were at least 90 unique figures that were released to retail. That volume guaranteed a few things: 1. A lot of those figures sucked. 2. Some of those figures were great. and 3. Collectors were sure to overlook some great stuff in the mass of product. Sure enough, all three of those points are true when looking at those years. The focus of this profile is to showcase one of the great overlooked and amazingly high quality figure releases that was dumped on us in the 4th quarter of 2004: the VAMP exclusive Chief Torpedo.

The VAMP set really was a winner. It was modestly priced for the amount of product it offered and the set featured some vehicles that had were welcome additions to most collections. For $20 you got: a new mold VAMP jeep in classic olive green, a Whirlwind in the same colors and three figures. Granted, one of the figures, Pathfinder, was the same paint scheme we saw with the A.W.E. Striker in 2001. But, this time he included his full range of original accessories in new, exclusive colors. Big Brawler is...well...Big Brawler. But, he did feature a new paint scheme. The Torpedo figure was the class of the set, though. A Muskrat body with 1992 Roadblock arms and a 1992 Wet Suit head made for a great figure. On top of the decently amalgamated mold, Torpedo also features incredibly detailed paint masks. The reason for this is because Torpedo features the exact paint masks that were used on the Convention Dreadhead figures. (At the time of his release, though, this was a detriment as the Dreadheads really didn't catch on with the collecting community and many collectors were tired of the Muskrat body after Dreadhead overload.) The result is that Torpedo is really a convention level figure in terms of quality.

As a kid, one of figures I most wanted Hasbro to produce was a Wet Suit and Torpedo in standard cammo and combat gear. After they appeared in these outfits in the Yearbook, it was obvious that they could be great additions to the line. Alas, Hasbro never produced either of these characters in anything other than dive suits in the vintage line. When Muskrat was released in 1988, I thought that he might make for a good representation of either of the divers based on their comic appearances. But, by 1988, I was pretty much out of Joes. As the modern line progressed, it became more and more likely that Hasbro would, eventually, visit one or both of these characters in alternate environmental gear. When Torpedo was finally released, the result was as good as could be expected with the parts available. I would have liked to have seen a boonie hat (maybe Crosshairs') included with the figure, but that might have been a tough call to find a head on which it would have fit. (Plus, by late '04, Hasbro had gotten lazy in their accessory complements with their exclusive figure releases. So, it's hard to condemn a figure released during that time for lack of accessories.)

This release of Torpedo brought new life to the character, though. As all the other Torpedo figures were stuck in underwater gear, it was tough to use them outside of an aquatic setting. For a while, Torpedo did see use as part of my hovercraft crew (inspired by issue #36 of the comic!) but that was short lived. With this new land based version, though, Torpedo could finally be the full SEAL he was meant to be. His greyish-tan base makes for a figure that can be used in the jungle, desert, forest or swamps. He retains a realistic color scheme without blending into the sea of olive drab Joes that were the hallmark of many of the '01 releases. The convention paint masks bring out the detail in the figure as pretty much everything is painted in some highlight color.

The figure has a few drawbacks. The most glaring is the mullet that was molded onto the figure's head back in the early 90's. It's hard to take this figure too seriously once you see that. It is a chilling reminder of the changes in style since the vintage Joe line. But could also be a fun character trait that other Joes could use to torment the fashionably challenged Torpedo. The figure also lacks any decent accessories. While the Pathfinder figure featured his full complement of vintage gear, the other 2 figures in the set were left to share a silver rifle that you see pictured with the figure below. This weapon works well enough for Torpedo. But, a SEAL just feels like he should include a pack, helmet and some other piece of equipment that showcases his level of training. At least it's easy to find surplus accessories lying around these days. But, at least some attempt at a decent accessory set would have been appreciated.

One of the gripes with this figure is that it should have been Wet Suit due to the use of the head. In that regard, I really can't disagree. Personally, when I see this figure, I see the Wet Suit character instead of Torpedo. But, the use of this head for Torpedo is at least consistent with the 1998 Torpedo figure. At this point, the head has been used for Torpedo as many times as it's been used for Wet Suit, so it's hard to really allow this one issue to preclude enjoyment of this figure. It would have been nice if Hasbro at least attempted some skin color variation to match Torpedo's Hawaiian ancestry. But, the overall looks still supports the character since it is unlikely that many collectors use the '92 or '93 Wetsuit sans helmet with any frequency.

The primary mold used for Torpedo is Muskrat. Aside from the Dreadheads and this figure, the Muskrat mold has not been used by Hasbro. While Muskrat appeared in both Brazil and India, those figures are very similar to the American figure in terms of color and paint masks. While this Torpedo figure gives collectors a way to at least have something new with the mold, the reality is that Muskrat himself would have been a great candidate for re-release at some point during the modern Joe line. Perhaps he'll one day return in a Convention set. Or, maybe we'll see Torpedo retain this body mold and appear again somewhere. But, this isn't a mold that's been played out. And, since it's been since 2004 that we've seen it, enough time has passed for the mold to be somewhat fresh and exciting again should it be used properly.

The last quarter of 2004 saw an tidal wave of Joe exclusive products. Aside from the standard retail waves that were shipping, Hasbro also offered 2 exclusive 6 figure packs and 2 exclusive vehicle packs. One of the figure packs was the highly army built Ninja Strike Set while the other vehicle set was the well done Operation Crimson Sabotage. Both of these sets were very desirable in multiples (at that time, there was no confirmation that the Toys R Us exclusive Crimson Guard army builder set would be released and the Sabotage set was the only way to get a quick Crimson Guard army) As such, many collectors simply found that their wallets could not keep up. When faced with the decisions of which toys to cut out during the holidays, most collectors left the Desert Patrol and VAMP sets sitting on the shelves as they bought up multiples of the Cobra army builders. Many collectors figured these two Joe themed items would be plentiful after the holidays and might even reach clearance.

But, a funny thing happened. The VAMP and Desert Patrol sets dried up at retail during the holiday season. As such, as we headed into 2005, there were many collectors who had missed out on these 2 items at retail. But, just when some chatter about how these Joe items had disappeared was starting to show up in collecting circles, the whole Oktober Guard availability issue hit and the 2004 Joe sets were forgotten as collectors scrambled to pick up the Russians. The result, for a time, was a pricey set. Many boxed VAMP sets were selling for nearly $40 plus shipping. Now, though, much of the wind has come out of Joe prices and you can get a boxed VAMP set and all three figures for under original retail price. When you can find a loose Torpedo by himself, he'll sell for under $6. For a figure of this quality, that's a steal. It's likely that there were only ~15,000 of these figures produced and this remains the only version of Torpedo that isn't in a dive suit. As such, it's a figure that belongs in every collection. And, at the current pricing, there really is no reason he shouldn't be. 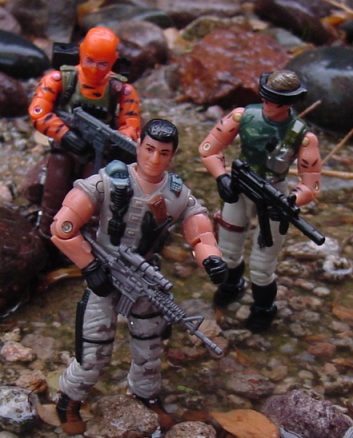 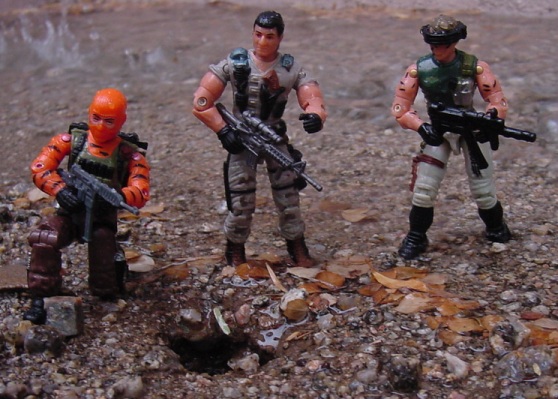 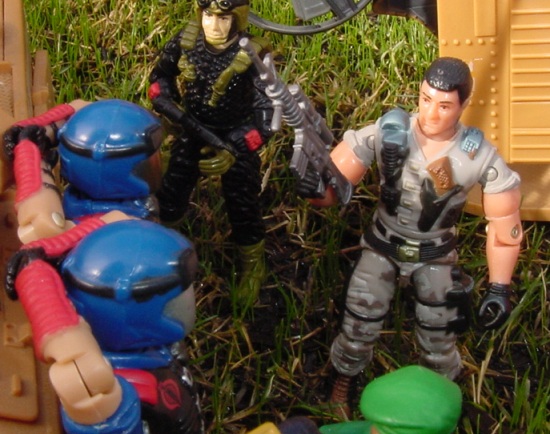 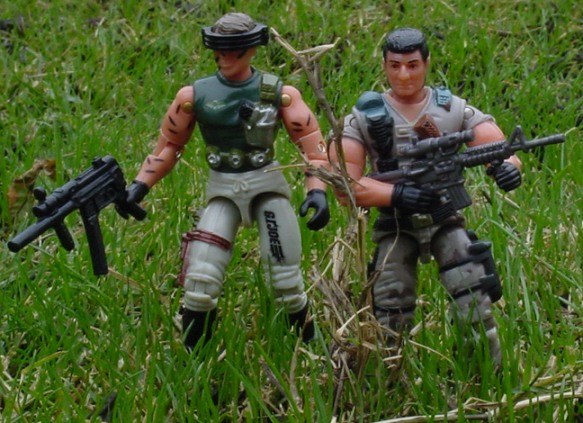 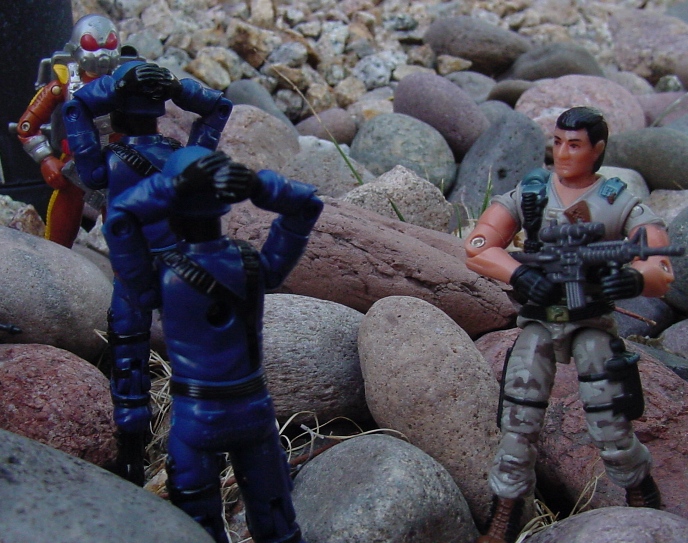 Posted by Robot_Sonic at 10:14 AM
Email ThisBlogThis!Share to TwitterShare to FacebookShare to Pinterest
Labels: 2004, Retailer Exclusive, Torpedo, Vehicle Drivers