To me, the character of Cobra Commander is the catalyst for the entire Joe line. Without him, G.I. Joe was just another bunch of green army guys. Once Cobra was introduced, there was a dichotomy in the line. There were clear cut lines between good and evil and the Joes now had a foil against which they could develop their characters. The Commander himself was always fascinating to me. He was a self made man who, by all accounts, was able to make incredible sums of money. Yet, this greed was motivated more by a need for power rather than a desire to be rich. Money bought power: not satisfaction. Yet, the character was deeply flawed. For a man who seemed to hate the U.S. and all its capitalist society represented, the Commander was quick to use that system to make himself fabulously wealthy. As such, you still have a contradiction in the Commander's character. It is small, but still there and a part of the character that was not fully explored. Over the years, we've seen many Cobra Commander versions. Most are variations on the similar theme of his standard look. This exclusive suited Cobra Commander is no different. It is the same hooded villain only this time, in a suit. Nothing really earth-shattering. But, there is something about the image that this figure evokes that makes this figure stand out in the sea of sameness that is the Commander. Thus, it is worthy of another look.

The early days of Cobra were heavily influenced by Nazi-esque imagery. In the first issue of the comic, the troopers were heavily blonde haired and saluted the Commander in a style similar to the Nazis. The army carried large golden banners in front of it. It was a way to evoke the true level of Cobra's evil. This figure plays right into that image. First, the exclusive podium follows the pattern of a persuasive dictator. Secondly, the suit the figure is wearing was actually designed for the Toht figure in the Indiana Jones line. As such, it was designed after a Nazi character. The combination is a look that hearkens Cobra back to its roots. This isn't the Cobra commander who wore an armored suit and used giant robots to kill his resurrected from the dead and brainwashed enemies. This is the Cobra Commander who went town to town, speaking at rallies, selling vitamins and built a loyal following of disillusioned youth and working class who needed someone to believe in. It is the charismatic leader who took over a town under the noses of the government and was able to build a military that was able to stand toe to toe with the elite units of the American (and other nations') army.

Love them or hate them, exclusives are part of the modern toy collecting experience. However, their handling is always open to scrutiny. In this case of this figure (and, the gold headed Pimp Daddy Destro from 2007) the handling of the exclusive is nothing more than a slap in the face to long term Joe fans who largely supported this hobby during the slow years. Just a few weeks prior to this figure's release, Joe fans were asked to attend the G.I. Joe convention in Texas. At that time, they had no opportunity to acquire this figure. It was saved for the San Diego Comic Convention. So, this means that hard core Joe fans were basically told by Hasbro that they either had to attend both conventions, skip the Joe con for the SDCC or miss the SDCC and pay ~$150 for 2 exclusive figures. As such, hard core Joe fans are punished by Hasbro for being unable or unwilling to attend two conventions that are in close date proximity to one another. Now, I'm not saying that the SDCC shouldn't have its own Joe exclusive. But, I do think that at least those who attended the Joe convention should have had the opportunity to pre-order these figures from Hasbro at the Joe con so their loyalty to the brand was rewarded and they wouldn't have to buy from the aftermarket speculators who make up so much of the SDCC crowd.

This figure is not actually a Joe figure in terms of construction. The figure uses the body from Toht from the Indiana Jones line of toys. This means that the figure has totally different construction from any other Joe figure. It features the standard ball joints on the limbs but is missing the horrid chest joint that ruins the aesthetics of most anniversary style figures. Due to the body construction, the figure is also more in scale with ARAH style or JvC style Joes and not the taller anniversary figures. As such, this is a figure with more versatility than if it was made in any of the other, distinctive styles of Joe construction. Plus, as this figure is pretty much meant to stand behind a podium, the lack of articulation isn't that big of an issue. As such, for an exclusive, this figure is acceptable. As a retail item, though, this figure would have been horrible. It's not really classifiable as any of the existing styles of Joe figures so it really is somewhat of a bastard step-child in the Joe world. But, the look is distinctive enough that most collectors could find a home for the figure in their collections.

There are two versions of this figure: this black suit and a blue suit with khaki pants version. The blue version was produced in much lower quantities and will be the more desirable figure down the road. Historically, the "variant" figure runs about 3 to 4 times more in terms of pricing than the "common" version. That trend will likely continue with this figure and you can expect to pay a substantial sum to acquire the blue suit version of this figure. The upside is that it's unlikely these figures will ever be re-released. The downside, though, is that Hasbro could, at some point, reuse the exclusive podium accessory and package it with a real anniversary style figure that features Cobra Commander in a similar outfit. At that point, this figure's exclusivity will no longer be relevant. But, that's the chance you take when you buy expensive modern figures in a line that is still active at retail.

The real highlight of this figure is the card art. The exclusive view of the Commander at his podium invokes the imagery of Cobra from the earliest days of the organization. To me, this is the most significant Cobra...before it was bogged down in superfluous characters, sci-fi plots and ninja overload. It is the Cobra of the Commander and his blueshirts. The cardback plays up the Commander's origins and is a nice addition to the figure's overall presentation. Personally, I found the value of this figure to be tied heavily to his complete packaging. Once removed, the figure's significance is somewhat diminished. But, it would still be nice to have CC standing at this podium in front of my loose Cobra army.

This figure's availability comes in two parts. Prior to the movie, the figure will be highly sought after and will likely top out in the $50 range once Hasbro filters out all the remaining overstock. Long term, though, I think this figure's appeal will diminish. Exclusives are always hottest right after their release. In time, they are forgotten as interest in a property wanes. As such, I think that in two or three years, you will be able to get these figures in the $20 range with relative ease. If you look at the history of exclusives, though, they can go both ways. Some have remained popular and expensive even though their toy lines have been long dead at retail. Others (most notably, Star Wars) have largely become clearance fodder and many of the exclusives are now available for below their original asking price. As for this figure, the reality is that since he's a hybrid of 2 lines, he isn't really an Anniversary style figure and he will be hard to place into collections as anything other than the display piece he was meant to be. That will limit his long term appeal. However, the distinctive card art and the display nature of the figure will also keep some interest in the design. (Though, Hasbro isn't known for making exclusive accessories for a limited run item so I'd say it's inevitable that we will see the podium packaged with another Cobra Commander figure at some point in the future.) Long term, this figure will probably settle into the $20 range. But, it will be a few years before it declines to that point. If you're willing to wait, I would do so as this is a figure that will likely be somewhat expensive in the short term. 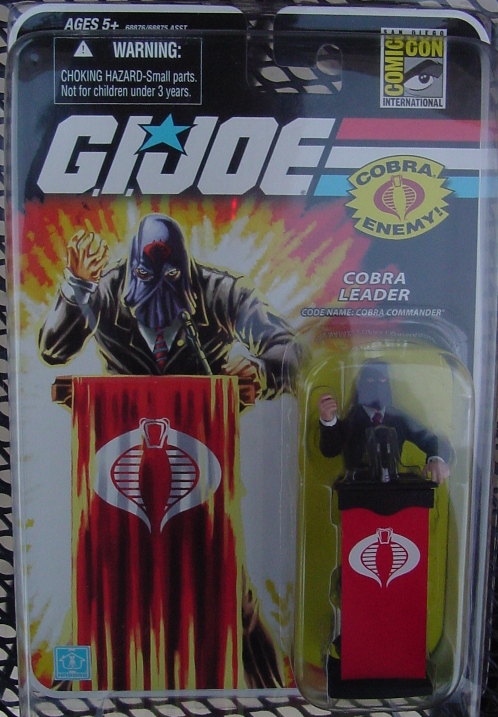 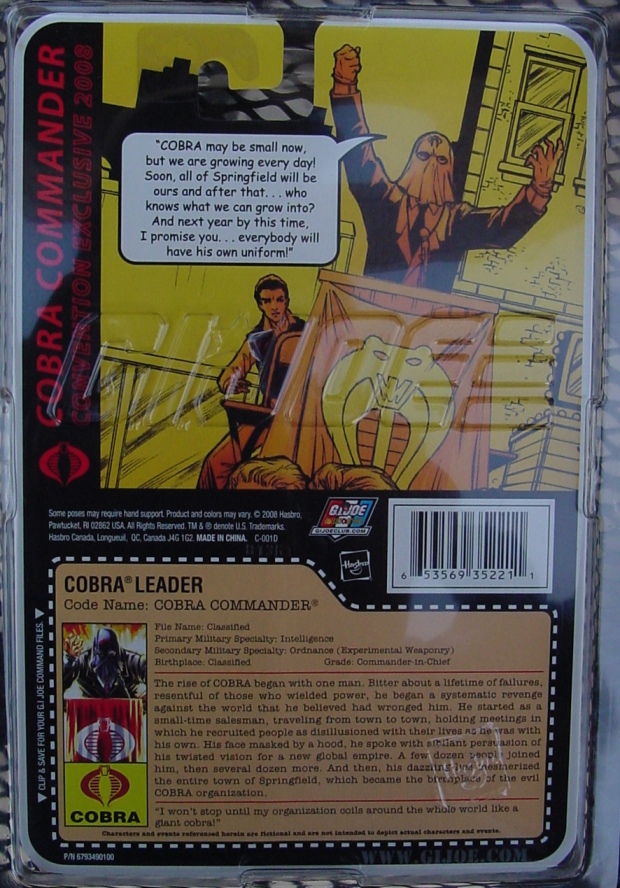 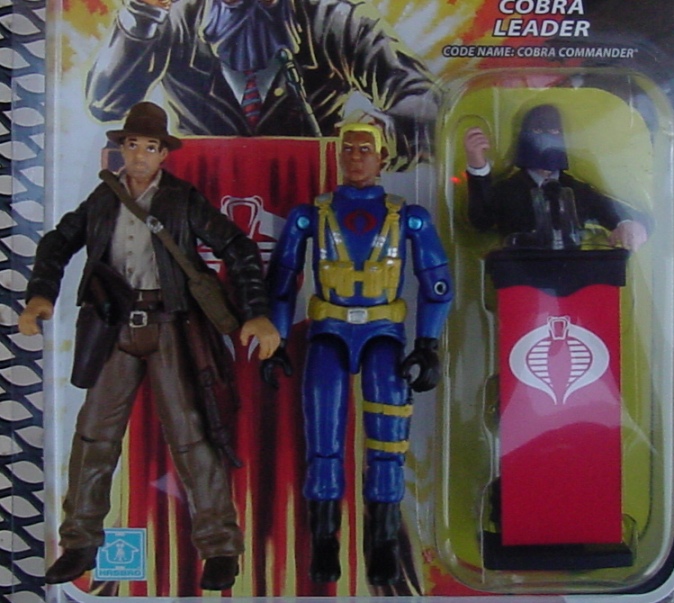 Posted by Robot_Sonic at 10:15 AM
Email ThisBlogThis!Share to TwitterShare to FacebookShare to Pinterest
Labels: 2008, 25th Anniversary, Cobra Commander, Convention Exclusive