I don't know why this figure has my attention these days. It's been in my collection now for almost 6 years and almost all of that time has been in a bag with the figure's filecard and accessories, safely packed away in a drawer or a box. The 2002 Gift Set Fast Blast Viper really shouldn't be the type of figure in which I have any interest. Yet, in recent months, I've taken a new interest in the figure and found it an asset to my collection...all the way to the point where I've actually gone out and acquired multiples. On the surface, this should be an inferior version of this figure. But, there is something about the look of the Crimson Fast Blast Viper that attracts collectors.

Beginning in 2002, Hasbro became fascinated with crimson. For some reason, it became the color du jour for Cobra repaints. While crimson has long been a staple of the Cobra army and the popularity of the Crimson Guard over his equally high quality contemporaries like the Eel and Snow Serpent shows that collectors hold it in high regard. But, Hasbro went a little overboard with some of their Crimson choices. Figures like Firefly, Undertow and this Fast Blast Viper really had no purpose in the crimson color. Collectors were quick to adopt the figures, though, as either ceremonial outfits or as the colors the unit leaders. It was an innovative approach and one that allowed collectors to be satisfied with fewer of these crimson army builders in their collections. But, at the end of the day, how useful, really, is a Crimson Undertow or Fast Blast Viper? Up until late 2004, the answer was not much.

In late '04, though, Hasbro released the Operation Crimson Sabotage set. This highly popular exclusive included 3 Crimson Guards in different racial and hair colors, a crimson Hiss Tank and a Crimson ASP. Most collectors really don't use Crimson Guards as standard Cobra infantry. Yet, the set was so well done and the demand for Crimson Guards so strong that the sets were largely gobbled up prior to Christmas. It is the vehicles, though, that were the real gem of the set. The Crimson Guard figure mold has now been released no less than 4 times, with 3 of them in easily acquirable crimson color. Collectors largely liquidated their extra vehicles from this set, though, as they tried to recoup some cost but also wanted to gain some storage space. At first glance, crimson Hiss Tanks and Asps don't have all that much practical use. But, coupled with a figure like this Fast Blast Viper, they can take on more significant roles within a Cobra organization.

In my collection, the crimson equipment serves a dual purpose. It is the ceremonial display that Cobra puts on for the tourists of Cobra Island. It is also, though, the equipment that dots Cobra Island. Since satellite imaging and surveillance techniques are so advanced, Cobra chooses to hide much of its weaponry in plain site. These Crimson tanks drag Crimson Asps all over Cobra Island and they are full service weapon emplacements. By doing this, Cobra lets the outside world know they are protected by standard weapons. But, it also suggests that if they are so overt about it, that they must have other, nastier weapons hidden. The casual invader isn't likely to be a world power. As such, they will probably not look below the surface and will underestimate the Cobra defenses. At the same time, those who know that Cobra must have other, hidden weapons, can't find them as the electronics zero in on the stuff in plain site. The tanks leave tracks and the Asps leave trenches that, at night, are used by Cobra's secret safeguards. But, since the tanks are overtly running day and night, no one is ever able to discern what types of weapons might be hidden beneath the island's surface.

This all leads to the Fast Blast Vipers. For me, the Fast Blast/Heat Vipers serve dual purposes. The HEAT Vipers and the black Fast Blast Vipers are the mobile armored weapons specialists for which the figure was designed. The crimson Fast Blast Viper, though, is the gunner of the Cobra world. The crimson attracts less heat than the black when stationed in the sun and it looks stunning as these Vipers man the turrets and gun seats of the Hisses and Asps that are their specialty. It's not much of a use, but it is an important one as it gives me a figure that is perfectly suited for these vehicles without sacrificing one a figure who is also well suited for other, more glamorous duties. The Joe line is filled with niche and role figures. Frankly, they are what makes the line so enduring since there is something for everyone. This crimson Fast Blast Viper is such a figure and one of the rarer examples of the role player on the Cobra side.

The Heat Viper/Fast Blast Viper mold has a bit of a history. After it was first released in 1989, the mold made its way down to Brazil where Estrela released it as Estihaco in colors very similar to the American figure. From there, the mold was returned to the US and dusted off by Hasbro in 2001 and released, with a new head, as the Fast Blast Viper. This Fast Blast Viper was released in 2002 and the full HEAT Viper mold returned in 2003 as a member of Python Patrol. It has not been released since. But, this isn't a bad thing. While the mold is good, it isn't a classic. With the first Fast Blast Viper, collectors had the mold in a coloring that was pretty much as good as we needed. The Crimson figure offered some diversity and the Python figure served the dual purpose of giving us a niche version of the HEAT Viper but also offering a fully black head that was the perfect way to turn the first Fast Blast Viper into a fully helmeted HEAT Viper.

The Gift Set in which the Fast Blast Viper was offered was the epitome of a marketing and distribution mess. To this day, the full set can be purchased for less than 2/3 retail price at many online dealers. Individually, some of the figures in the set can be acquired for under $2 each. Overall, the set was a disaster full of overused figure molds done in obscure and relatively useless colors that included no sensible accessories. But, time has shown that we actually got a couple of decent figures in the set. In fact, this is the third figure (along with Dial Tone and Wet Suit) that I have profiled from the set. But, it is also likely the last as these three figures are the highlights of the set and the other, remaining figures are less useful.

The thing was, in 2002, we had high hopes for what the Joe line would become. Largely, at least in the ARAH-style arena, these hopes went unfulfilled. Sure, we got some great figures in the 6 years of the ARAHC and its successors. But, most of the releases were flawed in some way. With several hundred figures released now, we have the opportunity to reflect and look back at the line as a whole and find the figures that really stood out, but were forgotten for whatever reason. They are out there and have become somewhat of a focus of my collection in recent months. During this time period, Hasbro released Joes as fast as they could. (In fact, they released more unique figures between 2001-2006 than they did between 1982 and 1994.) As such, the frantic pace caused more than one collector to acquire something and not get the time to integrate it into their collection and gain the appreciation of the figure's design because there were new items with short shelf lives that had to be acquired. This has given me a great chance to take this time when there really isn't much new to collect to look back and find figures like this Fast Blast Viper and give him his due.

When the gift set first appeared, the Fast Blast Viper quickly became the most popular figure in the set. At the time, collectors were starved for army builders and even obscure figures in useless colors got a lot of attention. As such, this has always been the most expensive figure from the Gift Set and continues to hold that distinction. However, a large quantity of these figures appeared over in Asia. That supply has helped keep the figure below the price it might otherwise have achieved. Still, this figure, complete with filecard, will typically cost you $7. That's not cheap for an army builder that most collectors agree is only needed in quantities of 1. As such, the price is a testament to the figure's overall quality. In time, I don't see the figure appreciating too much in value, though. It seems that the current price is fairly good for what the figure is and I would expect that in another 5 years you'll be able to still acquire Fast Blast Vipers for about this same price. Regardless, if you like this figure, you might as well get them now. They are a useful addition to most collections and can fill a valuable role in some of the Crimson vehicles that Hasbro has released since 2002. 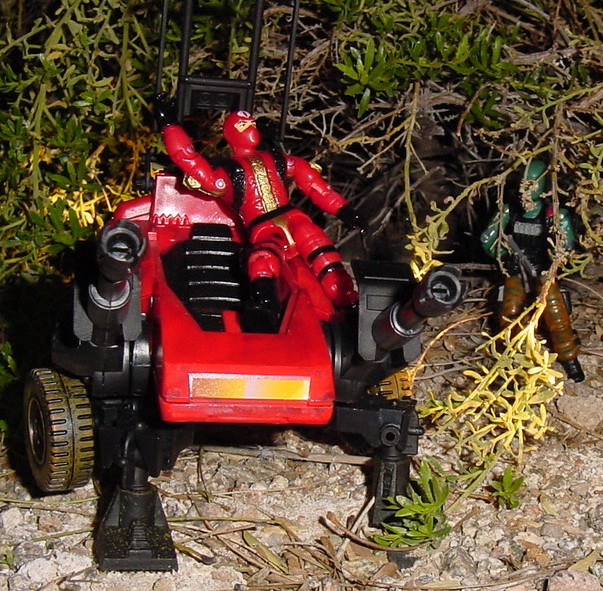 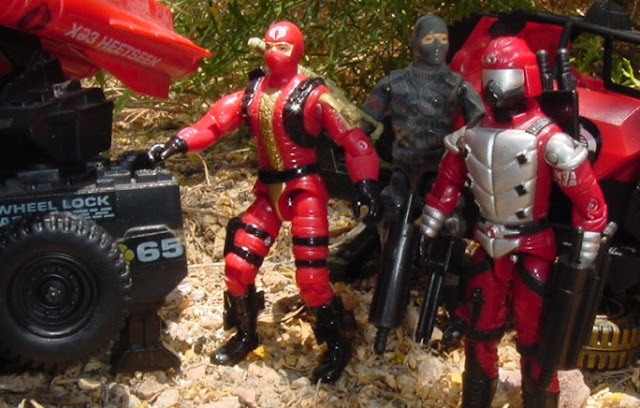 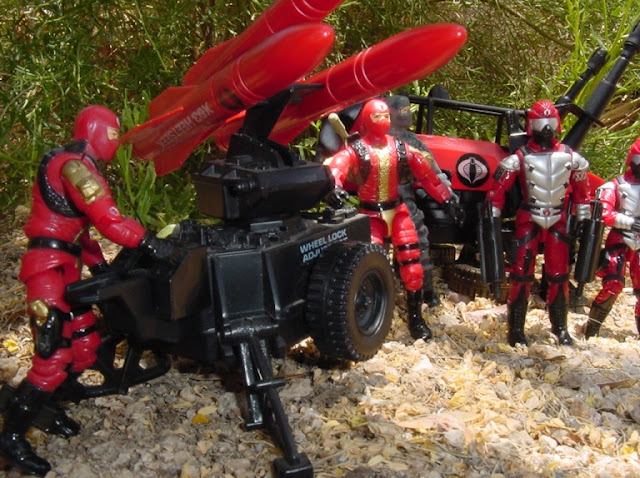 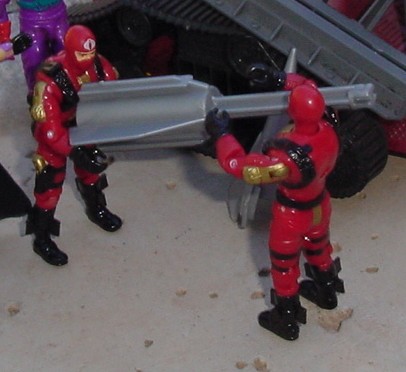 Posted by Robot_Sonic at 9:50 AM
Email ThisBlogThis!Share to TwitterShare to FacebookShare to Pinterest
Labels: 2002, BJ's Exclusive, Fast Blast Viper