Simply put, the Havoc is goofy. From a practical standpoint, it is one of the more ridiculous concepts in the Joe line and is about as useless in a real combat situation as you can imagine. But, none of that takes away from the fact that the Havoc is a fun toy. It features great play features and has tremendous value since it's so interesting to play with. It has long been one of my featured vehicles and is one of the few vehicles that has made the cut in my modern collection. It is certainly not without shortcomings. But, the vehicle works well as a toy which is how I was first exposed to it.

1986 was probably my most prolific Joe year. I was 12 years old, had plenty of spending money and was old enough to spend my cash and time wisely. 1986 has started slowly for me in terms of Joe and it took me a while before I felt I had caught up with some of the other kids in my class. By May, though, I had managed to acquire most of the '86 figure lineup and had even tracked down a few of the early release vehicles. The one big item I wanted, though, was the Havoc. To me, this looked like the Joe vehicle that I had been waiting for. You see, by '86, I had long since trashed my VAMP and VAMP Mark II. The Whale was still around, but not suitable for every situation. I had a Mauler, but found it heavily lacking in play value. Basically, I wanted a Joe vehicle on which I could use several figures and that had something unique that made it easy to play with. The Havoc fit the bill perfectly.

As the month of May wound down, I was certain I'd find the Havoc. But, it simply wasn't happening. I distinctly remember the weekend I finally acquired my Havoc, though. It was the weekend of the Indianapolis 500 in 1986. (Back then, the race was still relevant and was an event...very unlike today.) My father had managed to get 2 tickets to the race, but decided to take my younger brother. I stayed home and had to go grocery shopping with my mother. Back then, we did our grocery shopping right next to a Toys R Us store on Indianapolis' north east side. Since I had to go that way anyways, I managed to convince my mother to stop at TRU for me. But, as an added precaution, I called the TRU that Saturday and asked the employees if they had the Havoc in stock. Sure enough, they did. (Remember when calling a store meant you'd get actual help?) The clerk was even kind enough to hold one for me at the service desk. When we arrived at TRU, I went right to the desk, asked for my Havoc and went home a happy kid. I distinctly remember one other detail of that day, 1986 was a rainout at the Indianapolis 500. As the day wore on, I played with my new Havoc in the living room as I heard a torrential downpour fall outside the picture window in my parents' living room. I always felt I got the better end of that day as my brother shivered in the rainy cold at a track on the other side of town while I got to play with my long awaited Havoc from the warm dryness of our childhood home.

From there, the Havoc quickly took over as my de facto Joe vehicle. It was the one transport that was always called into duty. Cross Country drove with Sci-Fi or Dial Tone as the co-pilot. Sgt. Slaughter was always the gunner and Lifeline always manned the fancar. Leatherneck, Beachhead and Hawk were always on the side rails, ready to jump off and take out Cobra Infantry that tried to sneak up on the Havoc's sides. It battled against the Cobra armor of the day and was easily the equivalent of the STUN and the Thunder Machine. It was the mainstay of my Joe armor and was always the first choice for a vehicle whenever my Joes needed armor, transport or transportable air cover.

As a toy, the Havoc has some decent play features. While the cockpit is oddly designed, it also is greatly detailed and will hold two figures with ease. You have to fit them into their positions with bent knees, but it works. The gun tower moves up and down and can be used as long range artillery, close quarters weaponry or anti-aircraft weapons. It also locks behind the cockpit and covers the main engine cover. The real hallmark of the vehicle, though, is the fan car that is disguised in the back. The back doors open up to reveal a flying fan car that has guns on the side. It isn't the most practical thing, but it is a fun way to expand the play value of the Havoc. The nice part, though, is that if you don't want to use the fan car, you can leave the doors closed and the seat of the car works as a rear gunner station for the small guns on the back of the Havoc.

Aside from the absurdity of the overall design, the Havoc does suffer from poor color choices and lack of details. The guns and missiles on the Havoc are bright orange. While this can work, it does leave the vehicle somewhat bright and obvious. Fortunately, the parts are small and removable so a slight bit of paint will solve the brightness problem. The weapons on the Havoc also lack great detailing. While the rear guns are a nice feature, they are somewhat bland and lack the realism that collectors had come to expect from a Joe vehicle in 1986. It is these detriments that are most remembered by modern collectors, though. Which probably isn't fair. But, when taken against the line as a whole, the Havoc is easy to pass by in favor of other vehicles.

As a driver, Cross Country was a disappointment. The 1985 vehicle drivers had been nothing short of amazing. They had great sculpts, realistic colors and incredible accessories. But, all that changed in 1986 and Hasbro largely sucked the greatness out of their vehicle driver pack ins. Sure, Cross Country was still a unique mold that was only available with the Havoc. But, he suffered from an odd color combination and a head that was overly large for his body. Plus, he included no weapons. In short, he was nothing more than something to put into the window of the box to show the Havoc included a driver. In time, I removed Cross Country from my Havoc and replaced him with Heavy Metal. Heavy Metal had the look of someone who would operate large machinery like the Havoc and was a much cooler figure to have around. Hasbro attempted another Cross Country years later, but even its design fell flat. As such, I rarely associate Cross Country with the Havoc. To me, the vehicle stands on it's own much moreso than the figure who was intended to drive it.

The Havoc was released in the US as well as Europe and Brazil. The Brazilian version is a slightly different shade of green and is visually distinctive from the American Havoc. If you can track one of these down, it is an interesting companion piece to the American Havoc. The Havoc was also covered in chrome and released as part of the Sky Patrol subset in 1990. After that, the mold disappeared and this vehicle has been MIA since then. But, as modern collectors are quick to point out the vehicle's shortcomings, it probably wouldn't make much sense for anyone to attempt a reissue. No enhancement in color is going to make up for the wacky design of the vehicle overall. Plus, Havocs are so cheap these days that it is more prudent to buy a spare and paint it any way to you want rather than hoping to some day see a re-release.

Havoc's are not expensive nor are they hard to find. Even mint and complete, they cost nothing when compared to Cobra vehicles of the era or other Joe armor like the Mauler. The vehicle is somewhat large, though, so it will cost a bit to ship. But, by and large, collectors are indifferent to the Havoc. Most people who have been in the hobby a while likely have at least one Havoc in some state of repair. And, most of them have no desire for another version. To me, the Havoc's value is solely sentimental. It was the last vehicle that really made an impression on my childhood and remained a relevant part of my collection long after its design shortcomings became all too apparent. But, it's the innocence of childhood that has kept me a collector in the two decades plus since the vehicle was released. So, in some way, the Havoc is very much a great success. 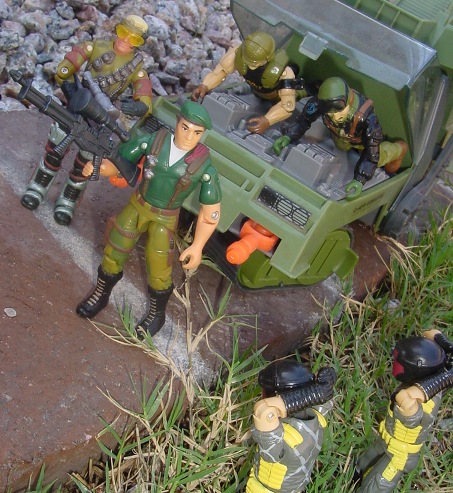 Posted by Robot_Sonic at 11:59 AM
Email ThisBlogThis!Share to TwitterShare to FacebookShare to Pinterest
Labels: 1986, HAVOC, Vehicles