During the modern Joe redux between 2001 and 2006, collectors had many requests for certain figures to return to retail. In time, we learned what Hasbro could and could not do. Despite this, though, collectors largely clamoured for the same figures over and over again. In time, Hasbro came through with fan favorites like original Cobra Troopers, Vipers and Crimson Guardsmen. The one faction that was not revisited, though, was the Headhunters. These figure molds were very popular with collectors and lended themselves to nice repaints. The obvious answer to Hasbro's inability to sate collector demand for these figures was that the molds were lost in Brazil. As the figures had been released in Brazil around 1995, this seemed plausible enough. But, in 2004, Hasbro offered a glimmer of hope when parts from Mace appeared on the comic pack Clutch. This indicated that some of the later released Brazilian figures might be available to Hasbro. Finally, in 2008, Master Collector came through and released a boxed convention set featuring the Headhunter characters and original figure molds. However, these figures were not met with the fanfare that might have been expected just a few years earlier. The result is a decent set of figures that have largely failed to endear themselves to the modern collecting community. Of the figures released, the Headhunter Driver has the most interesting story, even if he the most similar to his vintage counterpart.

Originally, the Headhunter Driver was going to be part of a vehicle/driver combo set. Thus, his name would make a lot more sense. The figure was intended to be the driver for a repainted Cobra Rage that would have been the Headhunters signature urban assault vehicle. However, production costs and other factors kept this vehicle from coming to light. (And, with the fiasco of the Maulers from 2007 still fresh on their minds, the decision to err on the side of caution can only be viewed as a wise one.) However, as the figure had been made, there was no reason why it couldn't be used for another promotion. So, the figure became the attendee bonus figure for those who purchased boxed sets. As just that, a bonus, the figure works nicely. It is decently colored though not overly complex and has a specialty that allows for compulsive collectors to scale back their desires for multiples. But, as a bonus figure, the Driver also suffered from decreased availability. Collectors could not just buy up multiples of them unless they found other attendees who purchased full sets who wanted to part with the Driver. The result was an increased demand for a figure that was nearly never to be the first place.

Much was made of the coloring of these Headhunter figures. Initial fan reactions were adverse as the figures appeared to be a light blue color. This was quickly explained away, though, as the photos not showing the "true" color which was revealed as "arsenic". In name, this is a cool color. And, in form, it would be good, too. However, this profile uses the hex code for arsenic as the background color. You can compare that background color to the color on the various Headhunter figures and make your own determination as to how true to the color of arsenic the figures actually are. The bigger issue for me, though, is that this Driver is just so close to the original Headhunter figure. At least the more common Headhunter Guards were done in all arsenic bodies that differentiate them from the original figures. This Driver does not. As such, if a collector is forced to choose between a high priced, low production run figure or the more available and cheaper vintage figure, there is no compelling reason to take the more modern rendition. It is so similar that there isn't a great reason to spend copious amounts of time and money tracking down additional Headhunter Driver figures.

The Driver figure is the opposite in coloring from the Guard figure, though. As such, any collector who tracks down a few of the Guard figures can now use the Driver as a commander or lead figure for those Guards. Much like the 2007 Rip It being a near inverse of the Wal Mart Hiss Driver, the Driver figure takes on an additional potential use by being the opposite of the more common, unnamed figures. The fact that both figures also feature the distinctive Headhunter logo helps pair them together. This logo incorporates Cobra into the Headhunter theme and helps to merge the two factions. It is distinctive from any vintage appearance of the Headhunter faction and is a nice addition to these figures. Though, it is brittle and will rub off easily if the figures are used too much.

One of the nice things about seeing figures like this revisited is that it brings a new opportunity to appreciate the mold. As it was released in 1992, the Headhunter is a figure that most modern collectors found affinity for long after their childhood. So, there aren't as many collectors to whom this figure was a vital part of their formative Joe years. These new figures, though, help these molds get some of their due. When you look at the Headhunter figure, the mold is full of possibilities for other uses. One of the most influential customs I recall from my earliest online days was a Cobra Commander by the immortal Evilface. This figure creatively used the Headhunter head as a new take on the Commander. It showed an ingenuity that, if properly applied, could be used as inspiration for many new Joe figures to be created from the molds we know to be available. While people are quick to point out that the number of ARAH Joe molds is "dwindling", the reality is that there are enough parts that an entirely new line of new figures and characters could be created only out of newly colored amalgamations. It's probably too late to see this pipe dream fulfilled. But, it does show that there is potential out there for molds like the Headhunter to be used in different ways that could more greatly expand the collecting experience.

The Headhunter Driver's accessories are interesting in that they are the only appearance of the bomb pack that is included. This orange explosive was originally intended for release with a Sigma 6 figure that was cancelled and never saw production. As such, the only way to get this accessory is with this Headhunter Driver. The bomb pack is cool enough for this reason, but really extraneous...especially when you consider this figure was intended for use a vehicle driver. He also includes 2 shotgun pistols. These are not the shotgun from the vintage figure and are, instead, from the new sculpt Joe line. The give the homage to the original accessories, but are inferior and don't really fit well with the figure. But, for what they are, at least they make sense. But, if you can find them, extra vintage Headhunter accessories make all the difference in the world for these figures. (Especially if you augment them with an Alley Viper gun, too.)

The Headhunter mold has been used for 5 unique figures now: the 1992 and 1993 Headhunters, Brutus from Brazil and these convention Headhunter Guards and Headhunter Drivers. All of these figures, though, feature the same basic paint masks (though, the Guard and Driver figures do have some additional gold paint that is missing on the vintage and foreign figures) and colors. Only the Guard is not done with a black body and he features black highlights. As such, though there are 4 unique uses of this mold, there are really only 2 versions that are greatly different and even those are still similar in appearance. As such, this mold still has some great potential. Headhunters in Cobra blue, dark grey or even crimson might be a nice way to make the mold more diverse. At this point, that's probably unlikely to happen any time soon. But, the existence of the mold does at least offer the possibility that the figure might, one day, be revisited in more distinct coloring.

The Headhunter Driver figure was the attendee bonus figure at the 2008 convention. As such, the only way to get one was to buy a boxed convention set and then attend the convention. As such, this figure is rather hard to find. Within a week of the convention ending, mint and complete with filecard Headhunter Driver figures were selling in the $125 range. (If you could find them at all!) In the months since, the figure has seen a slight decrease in popularity, but still routinely sells for ~$80. Really, that's WAY too much for this figure. Sure, he probably has low production numbers and is somewhat hard to find. But, this figure really offers nothing that you can't get from the original Headhunter figure. And, most collectors would much rather buy 6 or 7 vintage Headhunters than one of these figures. I know I would. Still, for what it is, the figure is rather well done, if uninspired. 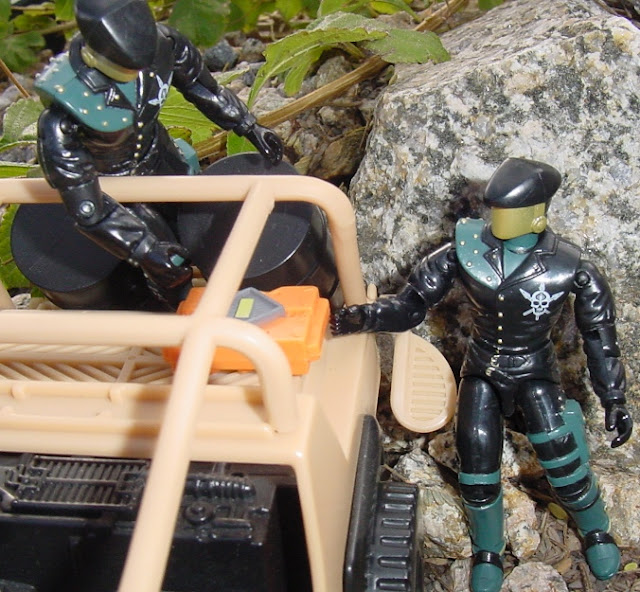 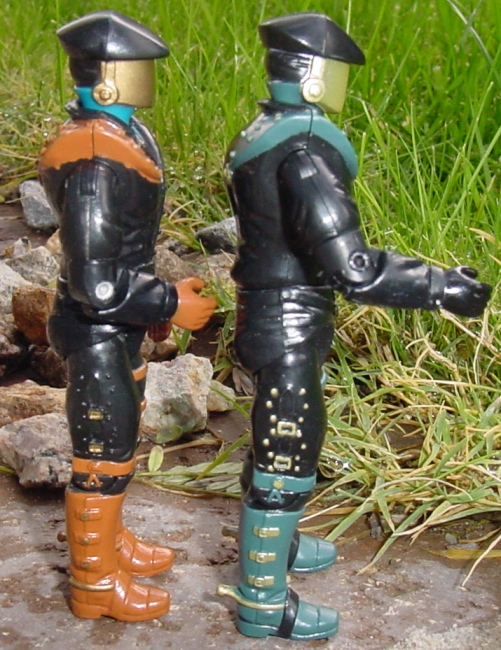 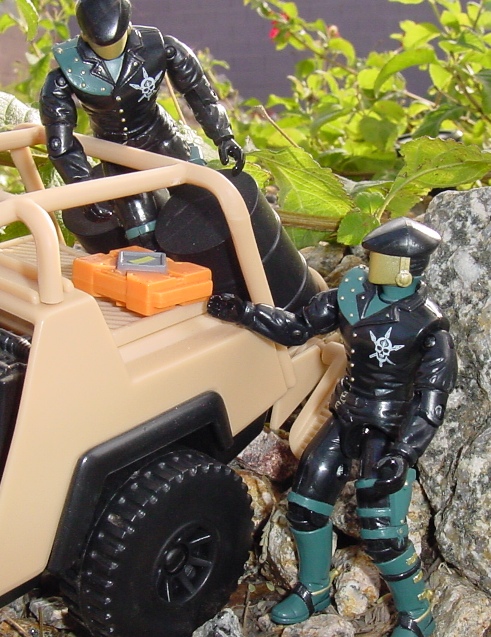 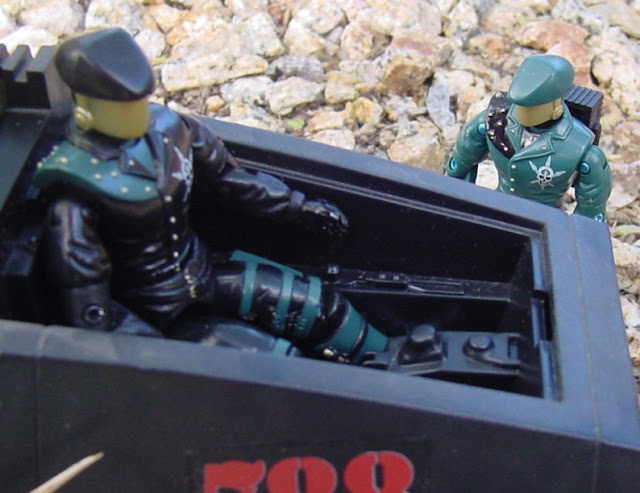 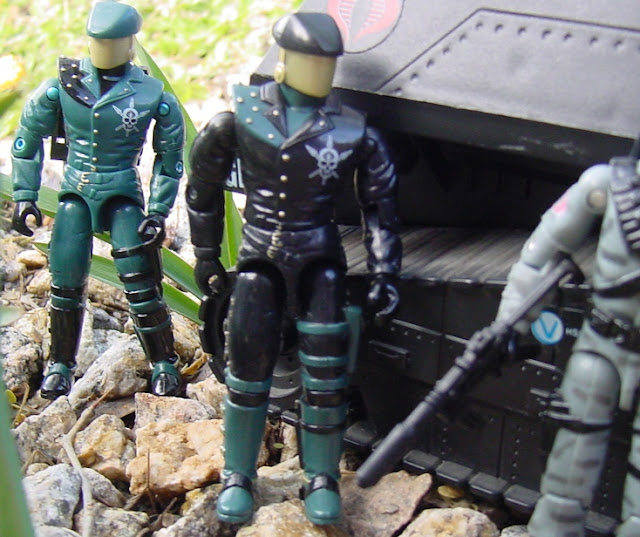 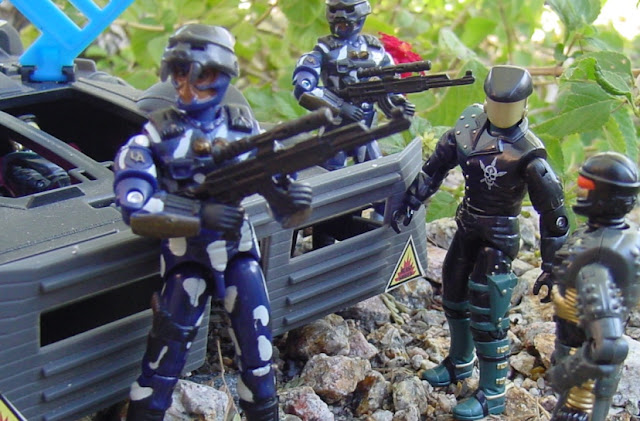 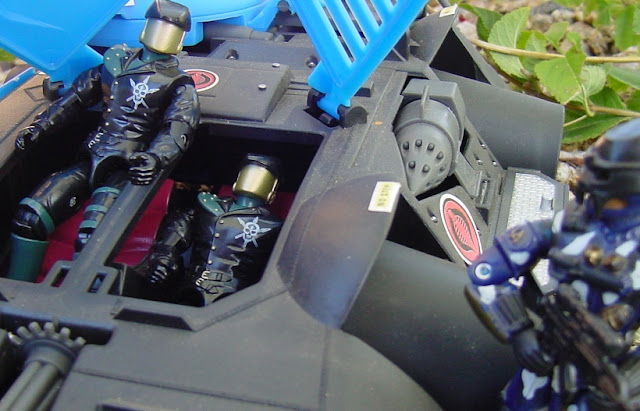