In February of 1985, the rumor hit my 5th grade class that the local KB Toys had received a shipment of the new G.I. Joe figures.  One Friday afternoon, I finally convinced my mother that my mid term grades were such that I deserved a present and wanted to go to KB to find it.  When we arrived, sitting on the shelves were multitudes of new G.I. Joe figures.  Not all were there, of course,  (An employee saw us looking through them and commented how the Commando figure had sold out instantly.) but there was a larger assortment than I had hoped would be there.  The first figure that caught my eye was Flint.  I went to pick him up, but saw that the figure's head was drooping the package.  Not knowing that the '85 Joes featured new hear articulation, I thought the figure was broken.  As it was the only one, I passed him by and purchased Airtight and Footloose instead.  As soon as I got to the car and opened my new figures and realized that the head droop was a byproduct of the new head construction, I immediately regretted not buying Flint.  Over the next few months, I searched for Flint in vain.  I found nearly every other figure in the line, but not Flint.  On Easter Sunday, my younger brother found a carded Bazooka in his Easter basket.  I assumed Flint would be in mine.  But, I was incorrect and got no Joes that holiday.  Finally, in the late spring, I found a Flint and added him to my collection.  He immediately became one of my favorite figures and retains that distinction to this day.

As a figure, Flint is very well done.  The figure has gold, silver, red, green, black and brown paint applications.  He is intricately detailed down to the shotgun shells molded onto his chest.  The head could probably be a little better.  But, Hasbro's attempt to update in the mid 2000's showed that is easier said than achieved.  Overall, Flint has a military look and solid coloring.  But, he still maintains that uniqueness that makes him a memorable character.  Many of the early Joes succeeded in this.  You knew they were "army men" for lack of a better generic term.  But, they were allowed the individuality that really let the fact that they were characters stand at the forefront.  At its core, this is what made Joe the line that it is.  Other military toy lines had a base formula and stuck to it...trying often to have something that looked like a generic soldier.  (And, often based on the archetype World War II G.I. as the inspiration.  Something that even the 1982 Joes are somewhat guilty of.)  G.I. Joe was more and Flint is a perfect example.  You know he's a soldier and good guy.  But, he looked different than the rest of the figures so you knew he was an individual, too.

As a whole, the accessories included with the 1985 Joe figures were not as sophisticated as those that had been included with their predecessors from 1984.  Many figures simply had packs, guns and, maybe, one other piece of equipment.  There were a few figures (Alpine, Airtight, Eel, etc.) who had elaborate accessory configurations.  But, many of the staple figures from '85 (Flint, Crimson Guard, Lady Jaye, Footloose, Bazooka, etc.) featured accessories that were more in line with the '83 Joes.  This may have been a function of the new head articulation eating up development dollars that would have otherwise gone to accessories.  Or, it could just have been that the designers thought the figures didn't need as much gear.  But, this does not, though, reduce the quality or the importance these accessories hold to each figure.  The '85 figure accessories are iconic to the characters.  Flint isn't Flint without a shotgun.  Lady Jaye needs her spear gun, regardless of how ill conceived it may be.  A Crimson Guard with any other weapon just seems out of sorts.

In my collection, Flint was always one of the most important characters and figures.  I wore out multiple Flint figures in my youth.  I lost the shotgun for my final figure and struggled for years to find an appropriate replacement weapon.  (I ultimately settled on a Snow Serpent AK-47 or the sub machine gun from the Night Landing.  Flint was so badass, he could use enemy weapons that he confiscated in battle.)  Even though most figures whose accessories disappeared often took on a diminished role in my collection, Flint did not.  He was one of the three main Joe characters for most of my youth.

My Flint was not only the great soldier as showcased in G.I. Joe #54.  He was also a respected leader and was the go to field commander for any Joe mission.  Flint was Hawk's second hand man, not Duke.  This kept him going in my collection long after I was done playing with toys.  In 1988, I was too old for Joes.  But, I had a small squad that was in a box under my bed.  Flint was one of these chosen few Joes.  To this day, I have more Flint figures in my collection than any other non army builder.  He's just a figure that works in so many environments that I have to have a few extras around.

The Flint mold was used around the world.  After his use in the US in 1985 and 1986, the mold made it's way down to Brazil where it was released in colors similar to the American figure as Muralha.  (Hasbro made Flint figures were also carded by Takara for sale in Japan.)  It seems the mold was intended for Argentina, too, as Flint appears on late Argentine cardbacks.  But, that figure was never actually released in Argentina by Plastirama.  The mold resurfaced in India in the mid to late '90's and was released there by Funskool in a variety of construction variations, though in colors similar to the American figure through 2003.  At that time, Hasbro regained possession of the figure mold (but not the accessories as those have yet to reappear.) and released a Flint figure in the 2004 Night Force set, a comic pack in 2005 and used the head in the 2010 convention set.  It's a lot of uses for a great mold.  Unfortunately, though, most of these figures are similar.  We never got to see this mold in arctic, desert or Action Force colors.  And, that has left me wanting more.  If a vintage style Flint would ever appear with drastically different paint applications, I would be among the first in line to purchase it.

As Flint remains one of the most popular characters from one of the most popular years of vintage figures, he is surprisingly pricey.  A few years ago, when the Funskool Flint was widely available for $4, American Flint figures were cheap.  With the Indian figures largely consumed by the collecting market, prices for high quality American figures have risen.  Truly mint specimens (with all the gold paint) can go as high as $22-$25 each.  Even figures with paint wear but that are complete with filecard will hit as high as $18 or so.  But, if you don't have a Flint, it's a price well worth paying to bring the original into your collection. 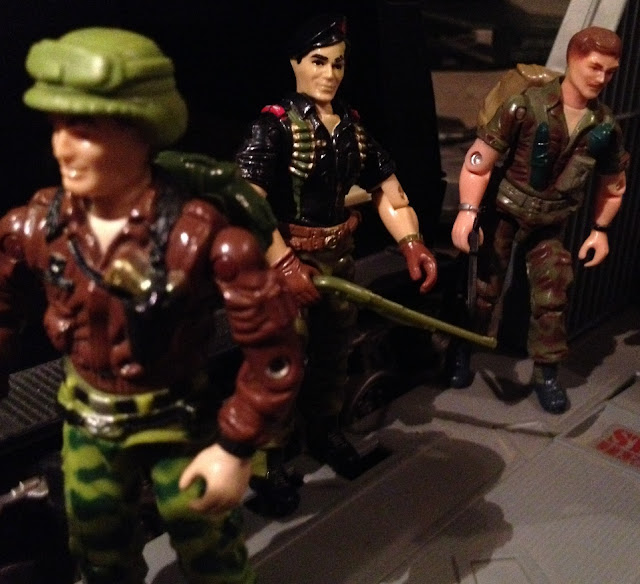 Posted by Robot_Sonic at 10:56 AM
Email ThisBlogThis!Share to TwitterShare to FacebookShare to Pinterest
Labels: 1985, Flint