1986 was a turning point for my childhood Joe collection.  In 1985, I had still spent a good amount of time playing very rough with my toys.  As such, most of the figures I acquired in early 1985 had considerable wear and lost accessories.  As '85 progressed, though, I began to take better and better care of my toys.  By 1986, I was very aware of play and paint wear.  I spent that year not only acquiring the newly released figures, but also upgrading my damaged '85's.  Fortunately, I was able to afford this through a lucrative grass cutting business that kept cash coming in from March through November.  This allowed me to not only upgrade my collection, but also buy up duplicates of figures that belonged to my younger brothers.  Usually, I left the figures I least wanted to them so that when they destroyed the figure, it was no real loss to me.  But, occasionally, a figure I originally dismissed would capture my attention and I would end up buying another version of the figure for me that I could keep nice.  Such was the case with Sci Fi.  Originally, his neon color was off-putting.  But, after we had him for a while, the figure grew on me and had to be added to my personal collection.

Let's face it, Sci Fi looks like Robo Cop colored in a horrendous neon green.  There isn't much to like about this figure, especially when you consider how out of place he looked in 1986.  At the time, I wanted to like Sci Fi, but couldn't warm to him.  It's not that he was bad.  It was just that the other 1986 figures were better.  However, as 1986 progressed, my Joe world took a turn to more science fiction as I integrated my remaining Star Wars vehicles into my Joe world.  With that Sci Fi became more interesting to my collection.  His color worked in the science fiction realm.  His specialty did as well.

While it made no sense for Sci Fi's weapon to behave like a Star Wars blaster, that's how I approached him.  Otherwise, the figure was of no use.  So, Sci Fi could bring tanks to a halt by melting their wheels, shoot down helicopters by chopping off the blades or burn through solid steel doors to break into a Cobra compound.  But, like many figures from this era in my collection, Sci Fi quickly wore out his welcome.  The laser was a fun thing to incorporate for a time.  But, got old and was too far removed from my core play pattern to remain a vital aspect of my Joeverse for very long.  So, slowly, Sci Fi found himself relegated to the chair of the G.I. Joe HQ or as a co-pilot of a Joe aircraft.  But, in this capacity, he found long life.  To this day, I often display Sci Fi in those same ways.  He is a staple of my Joe HQ.  For some reason, he just seems to fit into that role quite well.

For the first time in my years of reviewing Joe figures, I have a slightly different perspective: that of a father.  I now have sons of my own.  Reflecting upon my youthful experiences and the role that G.I. Joe toys played in them, though, has made me wonder about the childhood that my boys will experience over the next decade or so.  The days of walking into a toy store (for that matter, having more than one toy store to choose from!) and seeing a wall of your favorite toys all hanging there, begging to be purchased are long gone.  In my youth, every one of my classmates save for 1 played with G.I. Joe figures in some capacity.  It was a unifying presence.  When one boy brought the 1984 catalog into my third grade classroom, it was passed around to every male in the two separate classrooms for nearly a week.

These days, though, toys don't have that affect.  They are still a part of the childhood experience, but not nearly to the extent that they were in the '80's.  As such, it is unlikely that any toyline will ever again capture the imagination of a generation of kids like Joe did.  It has nothing to do with whether the line is innovative, realistic military, sci fi or fantasy inspired.  It has everything to do with changing habits of children.  A generation ago, kids playing with toys until they were 11 or 12 was common.  Now, those kids are glued to cell phones, tablets or other electronic devices.  A generation from now, they will be hooked on something else.  Toys will always have a place in the childhood experience.  But, action figure lines like Joe and Star Wars will always mean more to those who experienced them in their vintage days than they will to anyone who plays with them now.  The problem for a company like Hasbro is how do they keep a toy line going knowing that kids and collectors both are vital to any nostalgic line's success?  Collectors demand accessories, articulation and innovative design.  Parents demand a price point that is worth the fleeting moments of interest an action figure will bring to their child.

Those who followed the Marvel comic in the '80's were given a treat in 1985 when Marvel Age 33 previewed the 1986 G.I. Joe characters.  All of the favorites were there, even if the colors were a little off.  There are a few collector gems in there, though, such as the first appearance of Starduster when he was still named Hedge-Hopper.  Sci-Fi had a similar situation.  The character that appeared in that preview was not neon green, but blue and yellow.  And, in lieu of Sci Fi, sported the name Hot Spot.  Honestly, I don't know if Hot Spot is a better or worse name than Sci Fi.  But, it's a nice glimpse into the creative process that lead to finalized product.  The blue and yellow color was interesting, but I actually prefer the lime green.  For some reason, it seems more fitting for a laser trooper.

The Sci Fi mold was used for the American figure in 1986 and 1987.  From there, it was sent down to Brazil where Estrela released the figure in colors nearly identical to the American version.  Various parts, including the head, were then used for an exclusive character in the Brazilian Forca Eco subset.  There also exists, though, a mocked up version of Sci Fi that was referred to as "Translucent Joe".  This figure was sold as an unproduced concept by a dealer with close ties to the final days of the Joe line at Hasbro.  The Translucent figure used Sci Fi's mold.  But, it is unclear if this figure was intended to be Sci Fi, was an all new character, or was just a mock up using Sci Fi to prove a concept.  Regardless, it is an interesting footnote to Joe history and one of the rarer pieces of collectordom.

Sci Fi figures are neither difficult to find nor expensive.  While most collectors have a version, he is not a highly desired member of most collections.  As such, you can get them for under $7 most of the time.  You do have to be wary as the silver paint on the figure is very prone to wear.  The neon green plastic also tends to discolor quite a bit.  So, getting a fully mint sample may take more time than you would think.  But, it's still not hard to do.  For me, Sci Fi's value lies in the fact that he was part of my childhood collection.  For that reason, I appreciate the mold.  But, he is not a figure I conclude to be essential to any collection.  But, for the price, it makes no sense to pass him by. 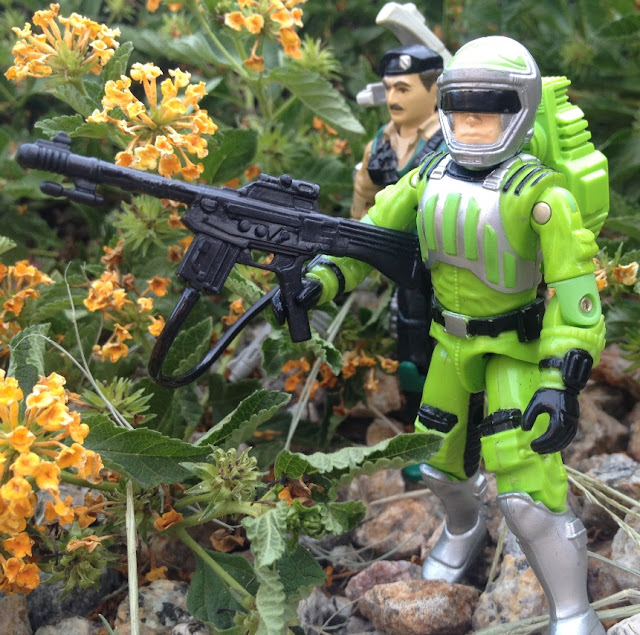 Posted by Robot_Sonic at 7:20 AM
Email ThisBlogThis!Share to TwitterShare to FacebookShare to Pinterest
Labels: 1986, Sci Fi