I have written before about the last Joes of my collection. There were three stragglers from 1988 who managed to be part of my childhood collection before I stopped buying Joes. Two of them were new figures for that year. The third, though, was a repaint of a classic figure from my childhood who had long been broken. When I saw the Tiger Force Roadblock on the shelf, I was excited as I was finally able to get a better version of the figure with his original accessories. It seems odd now, after years and years of Roadblock releases of both the figure and his accessories that something so common would be so appealing. But, in 1988, repaints were rare and it was hard to find figures that had been out of circulation for several years. So, the minute I saw the Tiger Force Roadblock, I had to own him.

The original Roadblock figure was always mysterious to me. The name, "Roadblock", simply conjured up someone capable of stopping Cobra on his own. Seeing the figure with such a powerful weapon only made me want the figure that much more. In early 1984, though, when we found our first three new figures on the shelf of a Value City Department store, I was too enthralled with Firefly to get the Roadblock. Instead, I pawned him on my youngest brother since I knew I would be able to basically call the figure mine after just a few days. Sure enough, that's what happened. My brother grew tired of his new Joe and Roadblock joined my collection as one of the most powerful and dangerous Joe figures around. Unfortunately, though, as the figure was still, technically, my brother's, he would take it and play with it from time to time. Quickly, the peg on the backpack and the machine gun stand were broken. In a matter of months, he snapped Roadblock's gun in two. I tried to glue it back together, but it wasn't the same.

This moved Roadblock into the category of figure who got away. I wanted to do more with the figure, but couldn't since his accessories were destroyed. I tried replacing his weapons with those from the machine gun defense station, but just couldn't make it work since he couldn't actually hold the gun. When the 1986 Roadblock came out, I wanted to love the figure. But, it just didn't do anything for me and the character remained someone I wanted to use more but could not find a way to overcome the accessory issue. This 1988 Tiger Force Roadblock, though, solved that dilemma. He not only included the original Roadblock accessories, but they were even colored better with a charcoal grey gun and stand instead of a green version. It was something I had wanted for a long time and was quickly able to integrate into my collection.

As soon as Roadblock got home, he was immediately involved in an operation where the Joes had to transport old equipment to a junk yard. Cobra, of course, attacked and the old, beat up SLAM in the back of a dollar store plastic military dump truck became the Joe's only salvation. But, being in the dump, it could not rotate to cover the front of the truck. So, Roadblock punched a hole in the truck's roof and mounted his machine gun so he could take out the Cobras. It's an oddly specific memory, but shows how important the figure was to me. I also acquired Hardball on the same day. But, I can not tell you his role in the adventure. Only Roadblock stands out.

As a figure, this is the standard V1 Roadblock mold. the base figure is a mixture of greens and browns with some yellow stripes thrown into the mix. Without those, this figure would be a solid update to the original figure and would have been releaseable outside of the Tiger Force subset. In general, though, Roadblock is among the more muted Tiger Force figures and this release is very useful, even when paired with non Tiger Force figures. The main issue remains the lack of painted details. Roadblocks harness is all green, with the grenades and details hidden in that base color. The result is a figure that, while decent enough, could still be improved upon. A few additional paint details and this figure could be even better.

The Tiger Force figures had the great fortune to include the full complement of accessories from their original figures. As such, this Roadblock includes his Browning .50 caliber machine gun, tripod, pack, ammo pack and helmet. The pack and removable ammo pack are in a light green this time around, though. The real gem is the machine gun. Gone is the green that haunted the weapons of the 1984 figures. It is replaced with a nice, charcoal color that is not black and not grey. It is a great update to Roadblock's weapon and would be much more appreciated if Hasbro had produced the accessory combo ad naseum in black in the 2000's. Roadblock's helmet is the standard 1982 mold, but cast in bright yellow plastic with black tiger stripes painted on. It's a ridiculous topper to the figure, but it works on some levels. Paired with the Tiger Force vehicles, Roadblock's helmet ties him to the genre even more so than his uniform.

The Roadblock mold saw just two uses in the vintage line: the original figure and this Tiger Force repaint. The entire Tiger Force figure was released on Asian packaging around 1994. Roadblock was one of the few 1984 molds that was never released by a company other than Hasbro. And, that continued into the repaint era. The full Roadblock mold made appearances in 2001, 2002 and 2004 with parts appearing at other times. Basically, the mold was rendered useless by Hasbro's incessant repainting of it. As such, many collectors have little use for the V1 Roadblock any more since the multitude of later releases really diminished the importance of the original release.

As a subset, Tiger Force is somewhat odd. They aren't really jungle specialists and they have both arctic and desert troopers on the roster. Really, it's just a way for some classic characters to have a slightly different uniform. The combination of yellow and green, though, can be a bit off-putting. But, within the context of the team, the figures do work. There is something about both the uniformity and the brazenness of wearing splashes of bright colors into the battlefield that has allowed Tiger Force to take hold in the collective collector conscience. As such, it remains a very popular subset among collectors.

That being said, though, Roadblock is likely among the least popular Tiger Force members. The figure is fairly ubiquitous and is relatively easy to acquire. As such, he tends to be the cheapest Tiger Force figure out there. Mint and complete with filecard figures tend to sell in the $6 range. For a figure with relatively brittle accessories who is a major character and part of a popular subset, that's a paltry sum. But, the Roadblock figure and character were overused by Hasbro in the 2000's and that has diminished a lot of interest in figures like this. But, it helps to free up collecting funds that will be needed to acquire a few of the more obscure Tiger Force repaints. 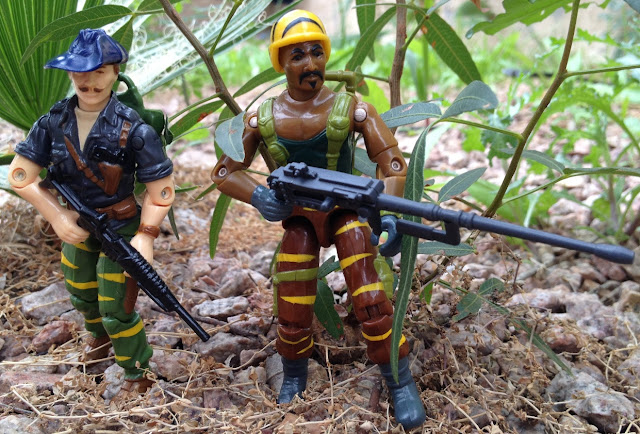 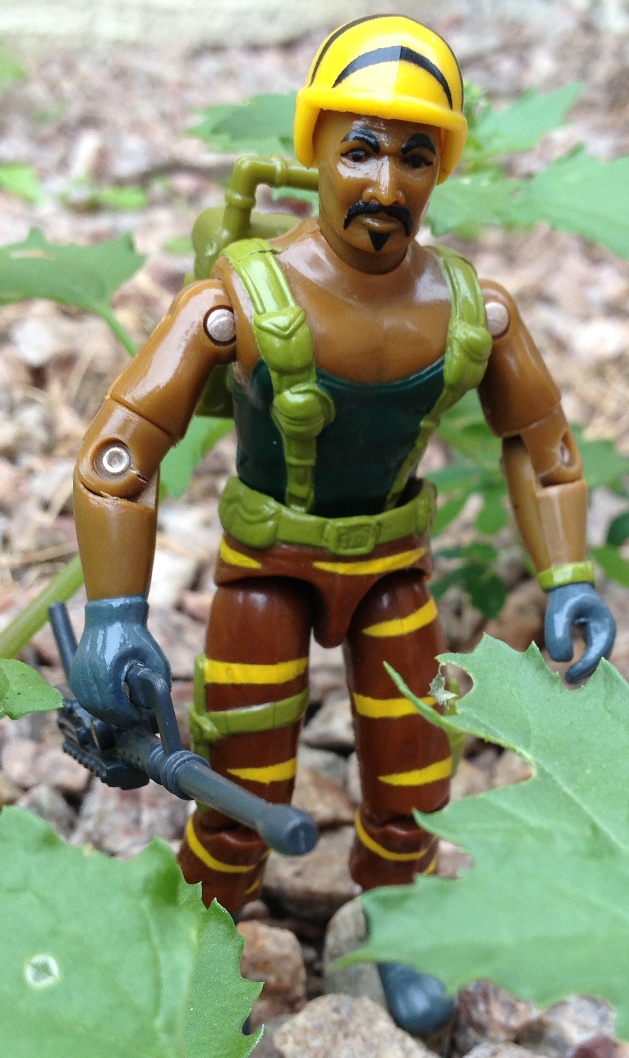 Posted by Robot_Sonic at 10:41 AM
Email ThisBlogThis!Share to TwitterShare to FacebookShare to Pinterest
Labels: 1988, Roadblock, Tiger Force