What do you get when Hasbro takes an obscure mold from 1994, repaints it in a relatively non-descriptive way, removes the accessories and releases it in a retailer exclusive, high price point, undesirable mold HQ remake?  The answer is the 2001 Rock and Roll figure.  But, the answer is also the 2002 Flint figure.  Confused?  You should be.  In one of the more bizarre moves in the history of the Joe line, Hasbro released the exact same figure in subsequent years in the same exclusive but with different names for the figure.  In 2001, the figure was Rock and Roll.  In 2002, he was renamed to Flint on the box of the HQ, but the figure's filecard still referred to him as Rock and Roll.  The fact that the mold is a repainted 1994 Flint just makes this one of the biggest messes in the history of the line.  But, the story of how it came to be actually is somewhat interesting.  And, the figure isn't terrible.  So, that's at least something to offset the confusing releases.

In the late 90's, Funskool released a version of the Sonic Fighters Rock and Roll figure.  It is nearly identical to the American figure, but is actually incredibly hard to find.  The reason is that Hasbro recalled the mold from Funskool early in the figure's production run as they intended to use it in their TRU or ARAHC re-releases.  Funskool complied and returned the mold.  Hasbro intended for this TRU HQ to have a repaint of that 1989 Rock and Roll figure.  But, when the time came, they could not find the mold.  So, the dug out the 1994 Flint, repainted him and released him as part of the HQ, keeping the Rock and Roll name.  Shortly thereafter, Hasbro actually found the Rock and Roll mold.  But, since they no longer had any plans for it since the ARAHC had been replaced with the new sculpt Joe Vs. Cobra line, they actually sent the mold back to Funskool.  Funskool then planned to release a new version of Rock and Roll at some point in either 2003 or 2004.  But, the Funskool line was cancelled before they got around to it.  So, the great 1989 Rock and Roll mold should have had 2 modern releases, but ended up with none.  But, that is how a Flint mold came to be named Rock and Roll.  In 2002, Hasbro tried to rectify the situation by calling the figure Flint on the package.  But, the reality is that since the 2002 HQ's were just overstock 2001 versions with new packaging, they didn't bother to print up any new filecards for the figure.  So, the box called him Flint, but the filecard says Rock and Roll.

I'm actually a fan of the 1994 Flint figure.  The mold, while it has some limitations, is rather strong.  The desert theme and odd helmet may limit him for some collectors.  But, I find that the look works and the helmet brings something unique to the design.  So, seeing it repainted was actually enjoyable for me.  The figure is fairly well done with brown, accent grey and the decent green pants.  The figure's torso is detailed well enough, but the legs are left basically unpainted.  So, the figure looks unfinished.  (This is likely a cost cutting move left over 1994 when some of the leg paint applications were left off Flint figures.)  The figure also includes no accessories.  While the head is nicely sculpted, the reality is that it needs a helmet.  With no head gear, the figure is too plain.  Even a weapon would have raised up in my eyes.  In the end, the figure is better than much of the ARAH style repaints Hasbro sold in 2002 and 2003.  But, he isn't nearly as well done as the 1997 and 1998 figures.

In my collection, the figure can only be Flint.  The mold makes no sense as Rock and Roll.  So, this is a version of Flint.  But, in the decade and more that I have owned this figure, I have never used him.  For whatever reason, I just can't find a place for the figure.  Without accessories, he is somewhat lost.  But, the solid coloring should at least get him an appearance in a photo or two.  It just hasn't happened.  I suppose this the very definition of "forgotten" when you can't use a decently colored mold of one of your favorite characters.

The timing of this figure's release was not great.  The ARAHC re-releases from 2000 had been hugely successful, though in a limited run.  2001 started strong, but Wave II was oversold and backed up in markets around the country.  This lead to huge quantities of pegwarmers.  Wave III was underproduced and only sold for a short time.  Wave IV was mostly sold to clearance outlets and the retail line was cancelled and Wave V went Internet only in early 2002.  In the midst of this was the 2001 HQ with this figure.  On Black Friday in 2001, I waited outside a TRU store to get one of these.  But, the line was long, the air was cold and I decided he simply wasn't worth the wait.  As the HQ's lingered into 2002, it proved to be a good thing as I ultimately traded for the figure at a much lower rate than had I bought the HQ.  In 2002, the Joe Vs. Cobra line was launched and Joe experienced a resurgence that lasted through 2004.  But, by the time the 2002 version of this HQ was released, it was old news and most collectors were awaiting the Spy Troops line that had started to filter out early.

This figure should be impossible to find.  He was only released with an HQ that was very expensive and undesirable for collectors to acquire.  It was released in 2001 and 2002 when Joe collecting was at it's highest, so few made their way into clearance bins.  Yet, this figure is ridiculously cheap.  Part of that is driven by the fact that a large quantity of overstock Rock and Roll figures was sold directly from Asia.  Many of these were sold straight to collectors for less than $5 each.  This sated most demand for the figure.  But, beyond that, the figure isn't that popular.  The mold is good, the colors solid and it's a major character.  But, no one really cares.  So, the result is a figure that's somewhat hard to find, but disproportionately cheap.  Today, you can get the figure without his filecard for $4 rather easily.  The filecard, though, is the tough find.  But, still, no one cares about it.  For me, this is a interesting figure that, had he a helmet, would have been a great update to an under-appreciated mold.  Instead, it is an oddity from a slow time in the Joe collecting world. 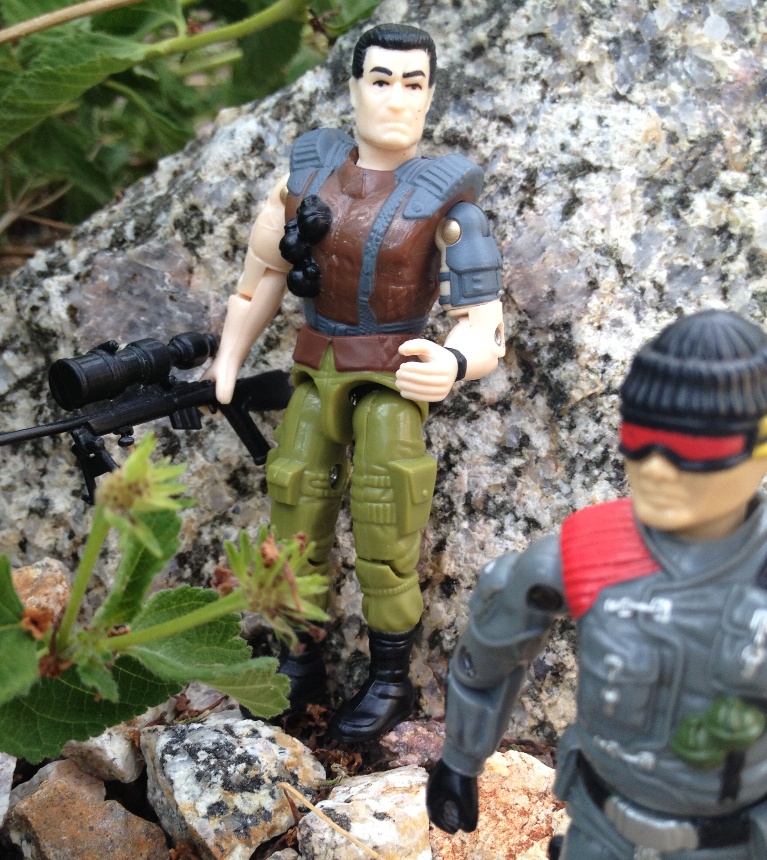 Posted by Robot_Sonic at 7:19 AM
Email ThisBlogThis!Share to TwitterShare to FacebookShare to Pinterest
Labels: 2001, Flint, Retailer Exclusive, Rock and Roll, Vehicle Drivers