Simply put, Cobra Commander is the single most important Cobra character in the entire Joe line.  Sure, Storm Shadow or Destro might be the favorites for some collectors.  But, no one can deny that, without the Commander, Cobra would have been a pale villain for Joe that would like have flamed out in a short timeframe.  With the Commander at the helm, though, Cobra had the dynamic, villianous leader that any good evil organization needs if they wish to stand the test of time.  Like most of the early figures, Cobra Commander's initial release was very worthy of his character.  His battle helmet denoted a dangerous enemy.  But, the baby blue coloring was less intimidating.  In 1984, though, Hasbro remedied this with the mail away Hooded Cobra Commander figure.  Featuring a bold Cobra blue offset with gold trim, the figure featured one mold difference from the first version: a new hooded head.  The result is a more laid back and strategic commander who better fits with his troops of the time.

In the mid 1990's, many dealers and comic shops thought this figure was rare.  He was a mail away only, so he had to be rare.  As such, many places sold loose versions of the figure for $35-$50.  Considering that, at the time, you could get carded '82 Joes for under that price, it was a ludicrous amount.  The reality is that this figure was produced from 1984 through, at least, 1993 and was likely available well into 1994 as overstock.  So, while he was never available at a store, he likely saw a larger production run that any figure who was released at retail.  In time, the collecting market figured this out and those early prices have dropped dramatically.  Early collecting had many of the ideas of rarity correct, but often got the details wrong.  This mail away figure is relatively common while others are among the rarest figures of the line.  It just took a while to figure who was who.

As a kid, I never used this figure as Cobra Commander.  My brothers and I got 3 of them at the same time.  So, this figure immediately became an army builder in lieu of the Commander himself.  The Cobra blue coloring made him a perfect fit as the gunner for a HISS Tank or ASP.  So, these figures became my Cobra Gunners.  They retained that title for many years, so much so that when I found my childhood toys in my parents' attic, a version was still strapped into the ASP.  It allowed me to expand my Cobra Blue army without having to buy more Cobra Troopers.  It also made sense to me that the Commander would have troopers molded in his image.  Their uniforms homages to his greatness.  It worked for a time.  But, there are better figures for these purposes now.  So, today, this is just the ceremonial Cobra Commander.  He appears in displays of other Cobra troops and that's about it.  He looks perfect next to original Cobra Troopers and Officers.  But, it doesn't make much sense to have him appear anywhere else.

As a mold, this version really fits Cobra Commander.  While the Commander's personality was large with an oversized ego, I always envisioned the man as rather small.  Not Napoleon short.  But, a slight build whose personality rather than his physical build carried the power of his military force.  In that regard, this mold is very successful.  Cobra Commander is neither overly slight, but he is not large, either.  He appears to be just an ordinary man whose personality drove him to power.  If you look at the mold, it is resplendent in detail.  The tunic buttons, golden bracings and the subtle undershirt give the Commander a regal appearance.  But, the armor plate on his back that holds his pistol lets you know that this guy still means business, too.  There are intricate details on the belt and the golden knife on his leg is a final, deadly display of excess.  But, it all fits with the character we've come to know as the Commander.

This mold was used for the helmeted Cobra Commander in 1983 and then the body was reused for this Hooded version in 1984.  In 1997, this body mold was planned for released in the Cobra Command three pack.  But, Hasbro could not find the tooling.  Which leads to the question, where is this mold?  Aside from the US releases, the figure was released in Europe and Japan.  But, this Cobra Commander mold never went to South America or India.  The fact that the Hooded Cobra Commander was in production until at least 1993 indicates that Hasbro had it right up until the end.  But, there is even more evidence that the mold should have been available.  In 1994, Hasbro produced a large quantity of figures for release in China.  These include in the infamous exclusive Major Bludd and Flint figures.  But, the helmeted Cobra Commander was also part of that line.  If you look at the Chinese releases, most of the figures saw release in the repaint line or in India.  (Roadblock, Duke, Dial Tone, Destro, Storm Shadow, Lifeline etc.)  So, Hasbro really did have the mold only three years before the repaints began and it should have been available.

Despite that, though, the mold never appeared again.  Hasbro resurrected the 1987 and 1991 Super Sonic Fighters Cobra Commander molds, but never found a way to bring this vintage version back to production.  It's an odd choice for Hasbro to not have resculpted this mold.  They did it for figures like Mutt, Lady Jaye and the Cobra Trooper.  But, never this version of Cobra Commander.  When you consider that they could have repainted this mold at least 3 times (Cobra Blue, Crimson, Black) and released each color as both a hooded and helmeted figure, it would seem that Hasbro could easily have recouped the costs of recasting the parts.  But, for whatever reason, things like that didn't happen in the repaint line.  Collectors are the ones who missed out as they were robbed of the chance of some great figures in lieu of a large number of mediocre releases.

(I have a theory on this, though.  I believe that Joe collectors are their own worst enemies due to their completist tendencies.  Hasbro could put out crap and collectors would buy it up for fear that they would never see anything else.  As such, Hasbro had no incentive to invest in the repaint line since collectors would buy just as many repainted 1991 Cobra Commanders as they would repainted '83's.  I think the 25th Anniversary line proved, though, that there was a large untapped market that Hasbro could have plugged into sooner had they released more classic repaints in better packaging.  But, they didn't know that until it was too late and the window for collectors to see high quality remakes of vintage molds has passed.)

This version of Cobra Commander is very easy to find.  Even bagged, the figures can be had for very reasonable prices.  But, I have found that, in recent years, perfect figures with no wear on the gold paint are getting much more difficult to find.  If you are willing to sacrifice a little perfection on the gold trim, you can have this figure for under $12.  Perfect specimens will climb upwards of $20, but you can get them MIB for just under $30.  So, it's not like the Viper Pilot symbol where a slight uptick in condition leads to a $50 or $60 price gain.  For a figure of this quality and importance to the line as a whole, it is a small price to pay.  The 1993 Cobra Commander follows the same idea for the uniform, but is more bulky.  I see him as the more battle inclined Commander from the later comics.  This version is the man who built Cobra on his back.  As such, I find him an essential figure to any collection. 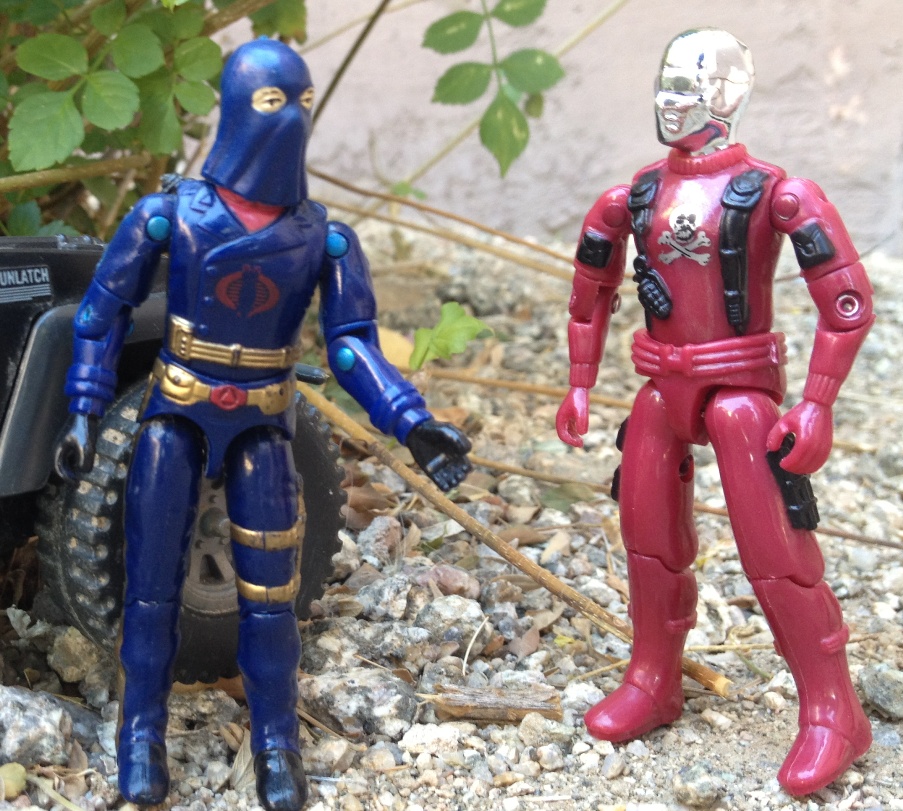 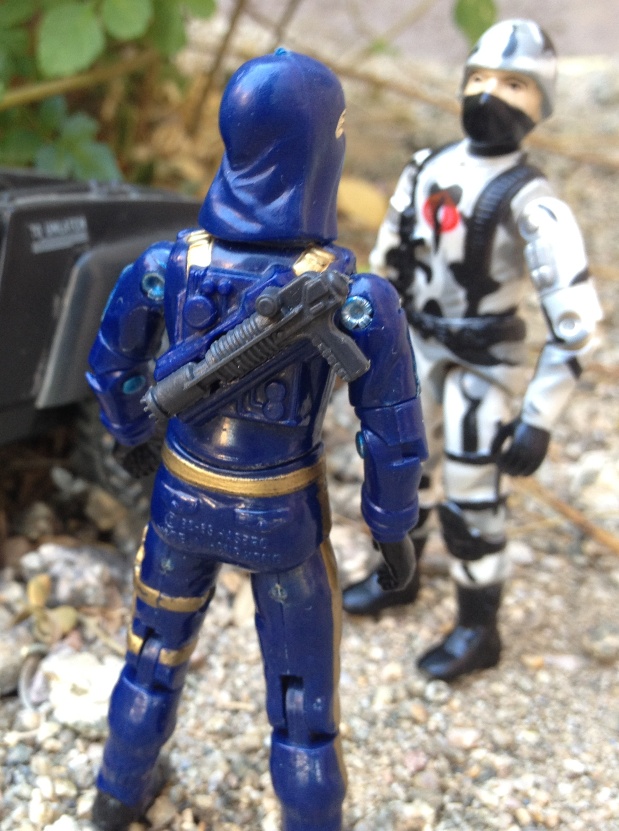 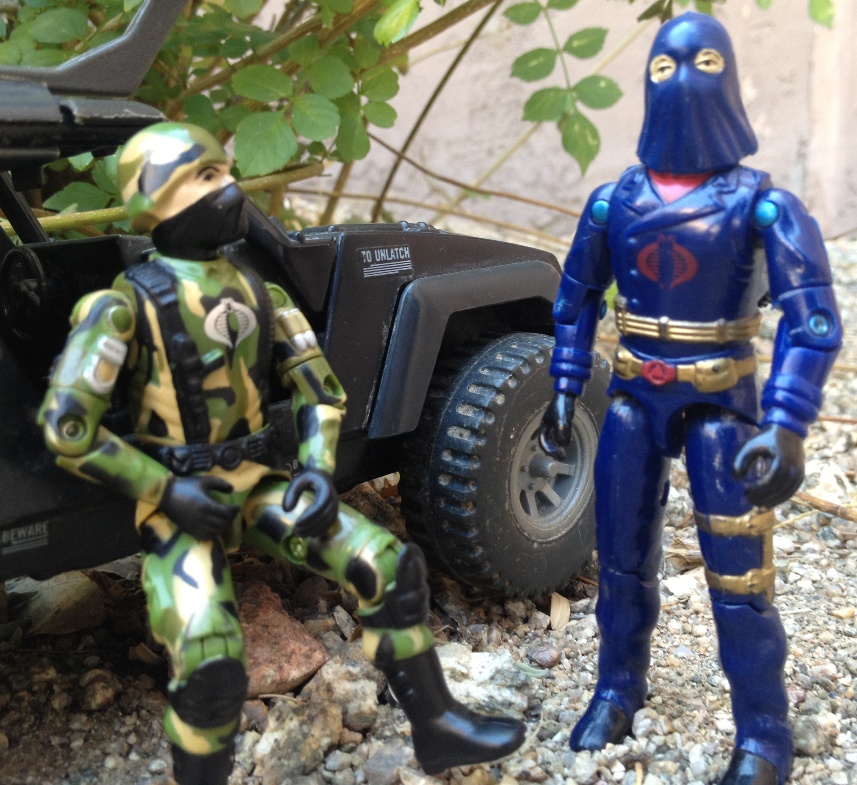 Posted by Robot_Sonic at 7:16 AM
Email ThisBlogThis!Share to TwitterShare to FacebookShare to Pinterest
Labels: 1984, Cobra Commander, Mail Away