There are many great characters in the Joe line's history.  Few, though, resonate with me as much as Major Bludd.  From the moment I first read his filecard in 1983, the character has stayed with me.  The combination of my Australian heritage, the terrible poetry and the fact that he was a mercenary with a ruthless past all added up to a character that made quite an impression on my 9 year old mind.

As such, this had lead Major Bludd to always be a major player in my collection.  The original figure always holds a place of prominence in my Joe world and is often showcased with the other major Cobras from those early years.  The subsequent U.S. released versions of Bludd aren't as iconic, but the Chinese Major Bludd has found itself a great niche in my collection as the more updated look for the Major.  This version of Major Bludd, though, isn't really in that vein.  I don't see it as an updated look for the classic character.  Instead, it is something new that denotes a new role for Major Bludd.

The mold for this figure is an interesting mix of figure parts that actually kind of works.  The head is from the 1994 Major Bludd figure.  It is a solid head that it true to the Major's roots.  Had it not been used in 2003 on the Python Patrol Major Bludd figure, it would likely have more impact on this convention version.  The rest of the figure is made of the mold from the 1989 Long Range figure.  Here, the mold choice could not be more obscure.  Long Range had not been seen for 17 years when it was dredged up for this Major Bludd version.  So, it's appearance is odd enough that the figure isn't stale.  The problem, though, is that the Long Range mold isn't the greatest.  The bizarre leggings really attract attention and often cause more questions as to their purpose than Bludd's right arm.

Of course, though, Master Collector chose to follow the lead of all Major Bludd figures other than the original by giving him 2 normal arms.  But, considering the date at which this figure was designed, that was really the only choice.  The original Bludd's armored arm is a perfect individualizing trait for the vintage figure.  But, it limited play and display options and was rightfully excluded from this incarnation of Bludd.  Overall, the look is definitely new for Bludd.  The overall figure seems somewhat skinny and tall.  (Though, with vintage molds, that's very relative.)  But, it does work for Bludd and isn't as awkward as some of the other figures released in the 2006 Convention set.

The figure's accessories are neither great nor terrible.  Cast in the now standard Convention Grey, Bludd includes 2 weapons and a figure stand.  The weapons are both molds from the JvC era of the Joe line, but are actually OK.  The Uzi is a decent pairing with Bludd and the movable stock gives the gun some character.  The other weapon isn't as great as it was designed earlier than the Uzi, but is still in scale with Bludd and does include a bi-pod that helps provide depth to the displayed figure.  A backpack would have been nice.  But, these accessories are more than adequate for the figure.

The figure is cast in Major Bludd's signature brown color.  It has black and grey highlights with convention level paint details that tie this version to the previous versions of the character that collectors consider to be iconic.  It does add, though, some red highlights.  On the surface, these aren't bad.  One of the traits of Major Bludd is that his color scheme doesn't really integrate with other Cobra factions.  As an independent mercenary, though, this actually works.  But, if you want to make Bludd the leader of a Cobra platoon, you end up with some contrasting colors.  In this case, though, the red coloring closely matches that of the 2005 Convention Iron Grenadiers.  (That is likely a byproduct of the same group producing both figures and having reusing unique paint colors.)  So, this figure can be matched with figures from the 2005 Iron Grenadier set without too much trouble.  The main problem with this is that Destro was hardly a Major Bludd fan.  So, teaming Bludd with Destro's personal troops doesn't really fit into the Joe mythos.

Fortunately, Master Collector included a small subset of troopers for Major Bludd to command in this convention set.  Major Bludd's Skull Squad Troopers are actually a very nice complement to this figure.  Cast in brown and using parts from Avalanche and the Crimson Guard figures, the Skull Squad Troopers appear to be a decent force for Bludd to command.  Bludd even features a new logo emblazoned on his arm to denote this new faction to the Cobra hierarchy.  Personally, I'm not too high on the addition of new subsets to Cobra or Joe as there are already plenty.  But, when the figures are good and make sense, then they can be decent additions to a collection.  And, in this instance of Bludd and his troopers, that is very much the case.

In my collection, this version of Bludd is solely the leader of the Skull Squad Troopers.  He isn't Major Bludd from issue #17 of the comic.  Nor is the Major Bludd who freed the Flying Scorpion in an effort to gain influence in the new Cobra.  This Bludd is the evolution of a mercenary for hire. Now, instead of doing all the dirty work himself, he has a team of like minded individuals at his beck and call.  These troopers allow Bludd to take on more complex missions while retaining a level of trust in his work companions that was rarely found inside the confines of the politically complicated Cobra.  It is a more niche role for Bludd.  But, this is very much a niche figure.  (Convention figures by their nature tend to be.)  It is a nice thing to have around for some diversity.  But this is not an essential figure to the Cobra hierarchy as there are better Bludd figures for that purpose.

There was a time when the named characters from Convention sets commanded premium prices.  But, those days appear to be past.  Now, figures like this Major Bludd can be had for next to nothing.  Often, mint and complete versions don't break $15.  Considering they cost about that to acquire new, it's not a bad time to add one to your collection.  Personally, I don't consider this the best version of Major Bludd.  But, it is something different for the characters that offers a little more color that can be integrated into more Cobra factions.  Taken with his Skull Squad Troopers, this figure is something that really works since the vintage Bludd figures aren't as good of a match.  Considering how cheap this figure and his subordinates are now, they are something that I would recommend to any collector. 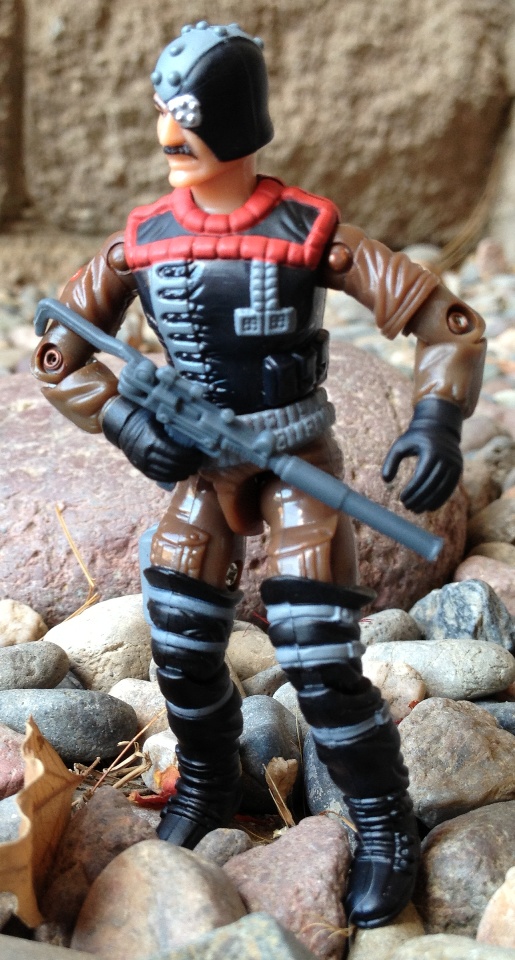 Posted by Robot_Sonic at 11:04 AM
Email ThisBlogThis!Share to TwitterShare to FacebookShare to Pinterest
Labels: 2006, Convention Exclusive, Major Bludd