It seems Sgt. Slaughter really clicked either with Hasbro executives of the time or with buyers of G.I. Joe toys in the late '80's.  For a celebrity endorser, Slaughter had 4 versions of his figure released in 3 years.  Not even Snake Eyes could boast that many releases in so short a period in the vintage line.  In modern times, Slaughter has retained his notoriety.  His appearance at G.I. Joe Conventions and his inclusion in the modern line shows that his popularity among Joe collectors remains very high.  Lost in Sarge's promotion of the property, though, is the fact that his figure also saw release in 3 foreign countries: Brazil, Argentina and India.  That either speaks to the global popularity of the man and his character or to the fact that Hasbro's foreign licensees didn't worry as much about character as they did about molds to release to their native customer bases.  Of these three foreign releases, the Plastirama Sgto. Slaughter is the easiest to find, but a very nice figure in its own right.

As a kid, I didn't have much knowledge of Sgt. Slaughter as a wrestler.  When he first appeared in the G.I. Joe materials at the time, I didn't even know who he was.  But, a few hours with my cousin and his pile of wresting magazines in the spring of 1986 quickly changed that.  By then, though, Sgt. Slaughter had already been part of my collection for so long that I had was ingrained with my own characterization of him rather than his wresting persona.  This helped make Slaughter's figures (first his mail away version and later the Triple T version) more vital parts of my collection than they would have been had I been more aware of the existing character.

My use of Sgt. Slaughter was almost solely based upon his appearance in the Marvel comics.  There, Slaughter was a kick ass combatant with no reference to his real world occupation.  I thought that Larry Hama did an excellent job integrating a character like this (likely at Hasbro's insistence) into his Joe world without sacrificing the quality of the stories.  While the V1 Sgt. Slaughter had been in my collection first, it was the second version (Available in the U.S. only with his TTT vehicle.) that found the greatest use in my childhood Joe world.  Here, armed with Rock and Roll's M-60, Slaughter ruled from the gunner's station of the Havoc.  He lead various convoys and was often in the thick of fighting.  But, like many toys in my childhood collection, Slaughter's relevance soon faded.  As the 1987 figures entered my world, older figures like Slaughter found themselves replaced.  After about a 6 month run, Slaughter became just another piece of cannon fodder who manned my Joe HQ.

Today, though, I really can't see the figure as anything other than a celebrity endorser of the line.  My adult brain simply can't get past the fact that this is a real person (albeit playing a character) who was injected into the mythos.  That does not, though, take away from the quality of the figures.  Really, the likeness of Slaughter captured in 1986 era sculpting technology is very well done.  Beyond that, the tank top is a bit much.  But, the extra muscles sculpted into the arms helps give the figure more realism that was missing from the line just 3 years earlier when Gung Ho was released.  The Slaughter figure seems taller than most of his contemporaries and that helps make the character larger than life.  It helps the figure stand out, even if that extra height also makes him harder to use in vehicles.

This Plastirama Sgto. Slaughter is based on the V2 Slaughter figure from the Hasbro line.  The colors are very similar, though not the same.  The skin tone is much more pink (as is common for many Plastirama figures).  But, the overall figure is nicely painted with different shades of greens, the black shirt, silver sunglasses and a golden Sargent's Insignia on his hat.  (As this is a Plastirama figure, though, there will tend to be some factory paint overspray on the details.  But, it's not as pronounced as that which was seen on figures produced by Funskool in the early 2000's.)  The green cammo is gone from Slaughter's pants and replaced with a solid green.  The wristbands on the Argentine figure are unpainted and it is likely that the paint masks used to create this figure are actually from the Slaughter's Marauders version that had been released by Estrela in Brazil.  But, the result is a figure that is very militaristic in color and feel.  You can actually put this figure into a forest of jungle diorama and he will fit right in with other Joes of that specialty.

The inclusion of Sgt. Slaughter in the Plastirama line doesn't make much sense.  The figures released in Argentina are almost exclusively molds from 1982 through 1985.  The only figures from after that time are this Sgt. Slaughter and Crazylegs.  How these two molds ended up in Argentina is very much speculative.  But, Slaughter and Crazylegs stand out for that reason.  The rest of the Plastirama line is strictly 1982 through 1985.  But, the Argentine vehicles did use many more molds that ranged from 1982 all the way through 1988.  It could be that Slaughter's character and the WWF were popular enough in Argentina at the time to make his inclusion worthwhile.  But, we'll likely never know the full reasoning behind what was and what was not released in Argentina.

The Sgt. Slaughter mold was the quite the world traveler.  After the 2 initial releases in the U.S., the mold was sent to South America.  It is likely that it went first to Estrela who produced Slaughter in his Slaughter's Marauders colors.  Estrela also produced the same figure for release in the U.S. for the Slaughter's Marauders subteam in 1989.  It is likely that Plastirama acquired the mold after Estrela and produced this Sgt. Slaughter.  But, it is possible that the timeline was reversed.  Regardless, the mold left South America and ultimately ended up in India where Funskool produced a figure named Sgt. Smasher that was very similar to the Plastirama and V2 Hasbro figure.  Also, during the mold's time in India, Funskool used the head for the remarkable Supercop figure.  After this, the mold went MIA.  Based on the timeline of the figure's release in India, it is plausible that Hasbro re-acquired the mold in the late 1990's.  But, it was either damaged beyond use upon arrival or was subsequently lost.  In total, the mold produced 6 figures, but they were basically in 3 similar color schemes.  But, since this look is solid for Slaughter and there's not much else to do with the mold, that is enough for most collectors.

Time was, this Sgto. Slaughter figure was the most common and least expensive foreign Joe available.  For years, carded versions of Slaughter would sit unsold for $3 each.  Slowly, though, the supply has dried up.  While hardly expensive today, the Slaughter figure is a bit harder to find a bit more expensive.  You can acquire a carded version of the figure for $15-$20, but may be able to get one for $10 from time to time.  If you can find a loose version, though, those typically run 1/2 the carded price.  If you are a Slaughter fan, this is a price well worth paying to get an exclusive version of the character.  If you aren't a Slaughter fan, it's still a pretty good price at which to acquire a foreign exclusive.  So, either way is a win.  I do enjoy this figure for the novelty of having an American "celebrity" released in a foreign land.  It's a fun, and inexpensive way, to enjoy something a little different in the Joe world. 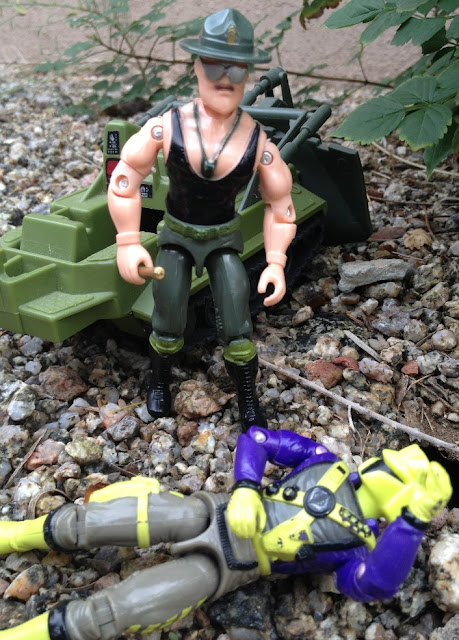 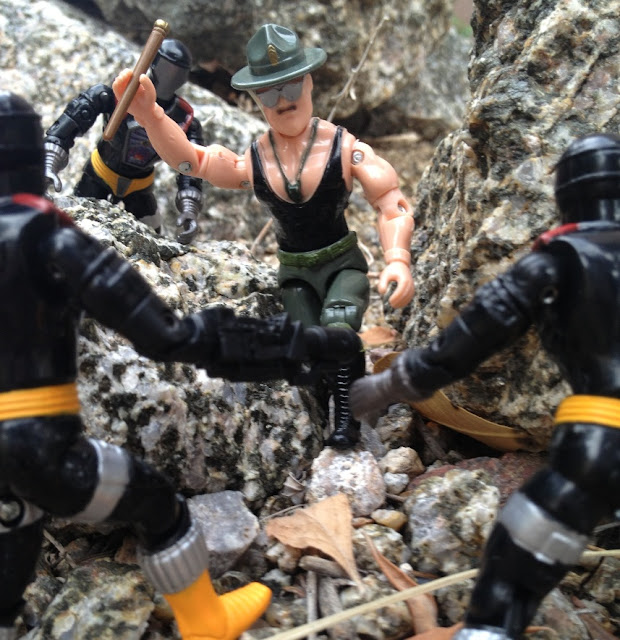