In the history of the vintage Joe line, there are a few glaring holes.  Some of these (like Kwinn) were plugged in the repaint era.  But, others were conspicuously absent.  While a character like Dr. Venom can be forgiven as he would have required a combination of new parts and frankensteining existing molds, many of the other missing figures are simply baffling.  Most of these fall into the category of obvious, obligatory army builder repaints.  In the late 2000's, collectors were able to pick up where Hasbro failed and bootleg Cobra Troopers started to appear on the market.  At first, they were straight up retreads of the 1983 Trooper.  In time, though, more colors started to appear and many of the gaps were filled in.  Among the first of these new colors to appear was this Crimson Trooper.

Hasbro proved that they had a nice cadre of classic army building molds available to them during the 1997 - 2006 time frame.  But, rather than focusing on what would be new, the spent their energy recreating slightly new takes on figures that were already plentiful.  As such, collectors were treated to the classic Cobra Trooper in two shades of blue and one of gray.  But, we were never treated to an obvious collector friendly repaint such as a Crimson Trooper.  In the late '00's, collectors filled this gap.  A series of bootleg Cobra Trooper molds were created and collectors started pumping out the variety of Cobra Troopers that collectors had been craving.  Among these were the long awaited Crimson Cobra Troopers.

There are now dozens of Cobra Trooper bootleg variants.  The range from the obvious like this Crimson version, to obscure like an off green figure with an Interrogator logo.  All are of around the same quality and all bring something unique and different to a collection.  In time, bootleg Crimson Guards, Snake Eyes (Used for Cobra Mortals and Cobra Invasors.), Grand Slam (Used for Cobra De Aco figures.) and BATS have appeared.  There are actually two types of Crimson Troopers.  One is made by a collector named the Black Major.  The others were created for a small group of collectors.  The figures are slightly different when compared directly.  The most glaring difference the figure's weapon.  The Black Major figures feature a dark black gun while the other release has a weapon that is more charcoal colored.  Both being bootlegs, it is a minor point.  But, something to consider if you are looking for the figures.

It is important to note that these figures are not Hasbro quality.  The plastic is inferior and somewhat brittle.  Crotches can snap easily.  The molds themselves are actually slightly smaller than true production figures.  (This is the easiest way to differentiate the Cobra blue bootlegs that came out first.)  Side by side with a production figure, the differences are hard to spot.  But, these figures can not wear vintage backpacks as their back hole is too small.  Their feet will not fit on vintage vehicle footpegs.  So, that can limit their use.

Crimson Cobra Troopers were such an obvious addition to the Cobra hierarchy, that's it is insane Hasbro never came through.  From 2001 - 2005, they repainted pretty much every Cobra they could into the Crimson theme with varying degrees of success.  This version of the trooper, though, shows that the Crimson theme works perfectly with the classic mold.  These figures are the perfect companion to Crimson Guards.  They can man Crimson Hiss Tanks, ASPs or SMS's.  They fill a void in any Joe collection and are a nice way to enhance vintage figure ranks now that Hasbro is done with them.

When these figures first showed up, some dealers tried to pass them off as vintage prototypes of unproduced Cobra Trooper variants.  This has had a lingering affect and even today, you will find people who believe the differently colored Cobras are legitimate Hasbro releases.  When in the market for any of the flavors of these figures, be aware of this and don't overpay.  While these figures do not exist in huge numbers, there are a lot of them out there and they are all concentrated in the collector market.  So, they are not as scarce as some sellers will want you to believe.

At first, these figures were very rare and nearly impossible to get.  Then, they were very easy and cheap to acquire.  But, slowly, the supply of the Crimson Troopers has dried up.  With that prices have risen.  However, risen is relative.  Originally, the figures cost around $6-$8 depending upon the source.  Today, you might pay upwards of $12 for a version.  For what the figure is, that's not terrible.  But, it may be a bit much to ask to army build when you consider that these figures are well done customs at best and full on bootlegs at worst. 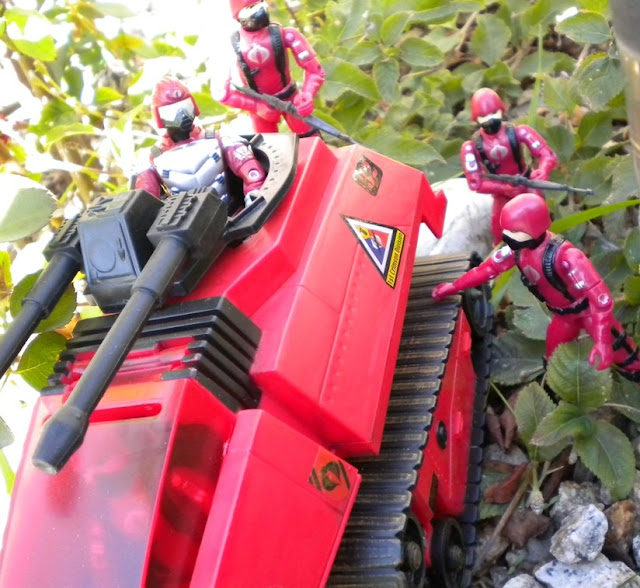 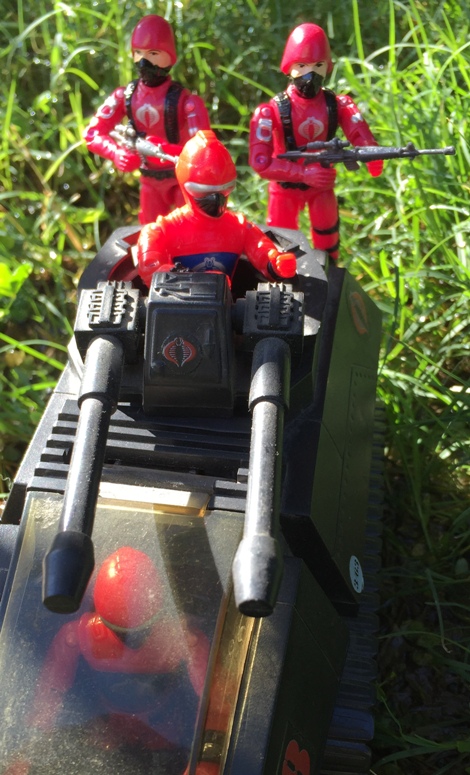 Posted by Robot_Sonic at 10:32 AM
Email ThisBlogThis!Share to TwitterShare to FacebookShare to Pinterest
Labels: 2009, Black Major, Bootleg, Cobra Trooper