In 2002, Master Collector shocked the collecting world with an exclusive set available to convention attendees.  (Sure, you could order it even if you didn't go, but you were, essentially, still paying for a convention ticket in the cost of the set.)  It was an amazing blend of figures that caught the collecting world by storm.  A crimson Baroness and Tomax and Xamot along with a full dozen crimson Cobra Vipers was exactly what pretty much every collector of the time wanted.  The sets sold out, saw great after market appreciation and a phenomena was born.  As such, collector anticipation for the 2003 set was very high.  With nearly a full year of waiting, collectors worked themselves into a tizzy with the possibilities of what the 2003 set would have in store for the collecting world.  When the set debuted, though, it was very different from the 2002 offering.  Instead of one, iconic, Cobra army builder with sensical commanders, the set included 10 army builders and 5 character figures: 3 of whom were Joes.

The army building figures (the aspect of the set that was most appealing to collectors of that era) were not great.  The Viper was a beloved mold that, at the time, could not appear enough times.  2003, though, saw the use of the highly obscure Mega Viper mold along with an amalgamation of the 1988 Ferret and 1988 Star Viper figures.  Collectors were underwhelmed.  The 5 characters were a bit better.  The new Black Dragon Ninja was somewhat forced, but interesting.  Cobra Commander was visually stunning, but the mold had limitations.  Falcon had not been seen since the vintage days, so his inclusion was welcomed, even if his original legs and accessories were gone.  Lady Jaye hadn't been seen in 6 years, so her inclusion was greatly cheered.  The final figure, though, was the most odd.  Sitting in the middle of the set was the ridiculously obscure Major Storm.

Major Storm first appeared in 1990 as the driver of the mighty General vehicle.  In 2003, a large population of the collecting world did not own a General and many were not even familiar with Major Storm.  Master Collector's rationale for his inclusion in the set was that he was a "rare" figure and this would give collectors a chance to get one.  It isn't terrible reasoning.  But, in 2003, there were hosts of "rare" figures that collectors would have salivated over.  Major Storm was not one of them.  At the time, the vintage figures, while somewhat hard to find, were not overly expensive.  You could get one for less than a mint and complete Cobra Trooper, Officer, Crimson Guard or Viper would cost you.  Plus, he was not a character that had taken on any secondary life in any of the comics or popular dio-stories of the time.  So, there was no real demand for the figure at all.

But, in retrospect, that is actually a good thing.  In 2003, the line was still full of hope of expectation that collectors would get tons of awesome new figures.  So, seeing a figure like Major Storm was a disappointment as everyone wanted something that was closer to pre 1988 vintage or just repainted army builders.  The reality is that had it not been for this release, there would never have been a Major Storm repaint offered.  Some might say, "Who cares?  He's a crappy figure anyways." and they are not incorrect.  But, the Joe line of the 2000's was mostly a sea of banality and sameness with recurring characters and molds that were seen again and again and again.  Major Storm is, at least, something different.  He is a figure and character that had no place being released in that era when more popular characters and molds were ignored.

As figures go, though, Major Storm isn't great.  The camo pattern designed for the 2003 convention Joes was supposedly Tiger Force inspired while not being Tiger Force.  The result is figures that don't fit into Tiger Force and are not painted well enough to really be integrated into any other group, either.  The vintage versions of Falcon and Lady Jaye are better than the convention paint jobs and Major Storm is too obscure a character to really base anything around.  The figure's base is a solid, olive based green.  The brown highlights are a bit too bright, though, and somewhat clash with the overall look.  The camo pattern and details, though, are the typical convention level quality.  So, that helps.  The biggest detriment is the figure's sunburned skin tone.  The large head makes this color more pronounced.  The color used for Major Storm's hair, eyes and eyebrows blends into the pinking flesh and gives the head the appearance that it was left undetailed.  It's somewhat creepy.  But, the helmet does help to obscure some of the issues.

The nice thing about the Convention sets was that they often included either a figure's original accessories or facsimiles close enough that they were more than acceptable alternatives.  Major Storm was the former as he included both his overly large gold pistol and his comically oversized helmet.  It was always nice to see figures released with their full complement of vintage weapons, so this was a nice way for Major Storm to be released.  But, Major Storm's weapons kind of suck.  They always have.  So, sure, you get the vintage look.  But, the helmet still looks awkward and figure and the pistol just isn't that interesting.

For me, Major Storm is nothing more than a placeholder.  I have never used the figure nor character in any meaningful way.  If you search the thousands of images on this site, you might see the character appear once or twice.  He just isn't someone in whom I have any interest.  Years ago, I acquired a beat up old General in a lot.  But, the frame was broken.  So, I stripped it of parts and left the carcass in the garage attic of an old house.  The vehicle was not that interesting to me, so it's doubtful that I'll ever track another one down.  So, that further limits Major Storm's relevance to my collection.  As an oddity of the time, this figure is a solid reminder of the collecting world circa 2003.  At the time, it was hard to imagine feeling nostalgic for that collecting era.  But, in retrospect, it was a much better time to be a collector than 2015.  But, this Major Storm is also a reminder that many of the issues that have slowly choked off the collecting community had their roots in the early online days and we are, basically, a product of the decisions made years ago.

Major Storm was, basically, an amalgamation of previously used parts.  The 1990 figure featured a new head.  But, the chest and arms were from the 1989 Windchill figure and the waist and legs were from the 1985 Crankcase figure.  This makes sense as it would have driven down the cost for a figure that was included with a high price point, low production run vehicle.  The 2003 figure uses the same parts combination.  The fault is that the head is large and the chest is small.  So, the figure looks unbalanced and the effect is only magnified when Major Storm is wearing his helmet.  The existence of the 1990 Major Storm is likely the reason that Crankcase never materialized in the repaint era.  (He was at least considered as the driver for the 2004 AWE Striker repaint that included Dialtone instead.)  And, since Crankcase is one of my preferred figures, I hold that against Major Storm even moreso than I do his odd proportions.  The Windchill parts would later make appearances on other Convention figures.  But, this was the last time major Storm ever appeared again.

Major Storm, like many of the 2003 Convention figures, quickly fell into obscurity.  Most collectors who wanted one at the time, just bought a convention set.  In the years that followed, all of the figures fell by the wayside as better sets were released.  Today, mint, complete with filecard Major Storm figures sell in the $30 - $35 range.  They aren't overly common.  But, the low demand keeps them cheaper than a more popular character of similar rarity.  Considering that it's been over a decade since this figure was released and the fact that he was never revisited in any form, those prices are probably fair.  But, for a collectibility standpoint, I'd be hard pressed to spend that much on this figure.

In the end, I'm still torn by this figure.  Really, I have no interest in him and have never used the figure in any capacity.  He doesn't fit with any vehicles.  And, if I had a vintage General, I'd get the vintage Major Storm to command it.  At the same time, I'm glad that someone as obscure as Major Storm got a chance to be redone during the 2000's.  There were so many Duke, Snake Eyes and Roadblock figures that collectors were inundated with sameness.  The rare, obscure gems that did appear are now great breaks from the sea of sameness that defined the retail releases.  I think it really comes down to the fact that I'm happy this figure exists.  I just wish it was a little better. 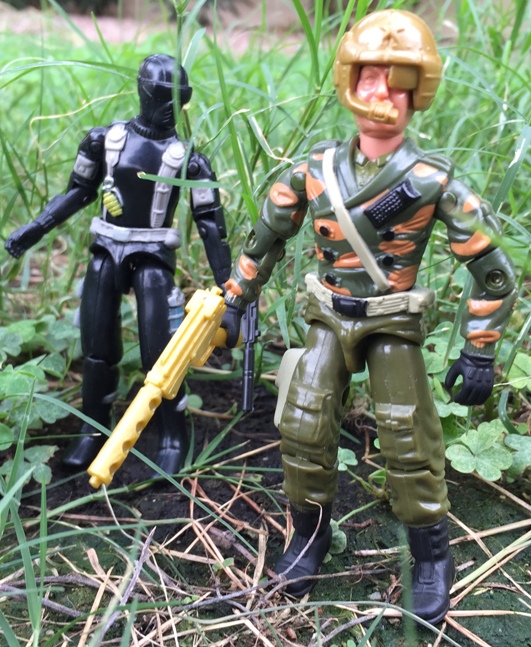 Posted by Robot_Sonic at 5:00 AM
Email ThisBlogThis!Share to TwitterShare to FacebookShare to Pinterest
Labels: 2003, Convention Exclusive, Major Storm