At some point in the mid to late 1980's, the Plastirama toy company in Argentina released a triumvirate of exclusive Cobra Ninjas in their native country.  The first two members of this highly desired group of figures are the famous Satan and Ninja-Ku characters.  Satan is a blood red repaint of the iconic 1984 Stormshadow mold.  Ninja-Ku is repainted in all black, and given an African skin tone to boot.  There is a third repaint of the Stormshadow mold, though, that is less popular than these more striking variants.  It has become the largely forgotten member of the Argentine ninja family.  But, the Cobra De Hielo, or Ice Cobra, is equally as interesting as the more popular variants and is a figure well worth examining.

Initially, this figure appears to simply be an international version of Stormshadow.  However, a quick read of the filecard shows that this is a completely new character.  Here is a filecard translation:

A martial arts expert, Ninja is a super expert in scaling huge ice walls with equipment.  Equipped with incredible strength, he overcomes the toughest weather conditions without flinching.  To fulfill his sinister task of destroying Comado, he will cross Antarctica.  Thanks to the Ninja's clothes, he is easily confused with the white landscape and it is almost impossible for the Comandos to discover his movements. 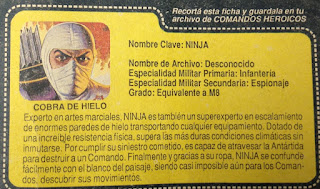 So, this is not Stormshadow, but a winter espionage character who blends into the ice and snow to wreak havoc on unsuspecting Joes.  What is equally interesting, though, is that the Brazilian version of Stormshadow (The Cobra Do Gelo) is a similar, Ice Cobra, character.  Do Gelo's filecard, when translated from Portuguese, is basically the same as the Plastirama version.  It is likely that the Brazilian version came first and that Estrela toys actually created the character who was then adopted for the Argentine market.

As a figure, Cobra De Hielo is almost identical to the American Stormshadow figure.  He features the same paint masks as Stormshadow and the same color applications.  The main difference is that the Cobra De Hielo has brown eyes and eyebrows as opposed to the black versions on the American figure.  The overall paint mask quality, though, is substantially poorer than the Hasbro made figure.  The figure in the photos below was taken straight off the card.  So, the paint wear was from the factory rather than use.  The main attraction of this figure, though, is that the white plastic of the Cobra De Hielo figure doesn't yellow like the plastic used on the American Stormshadow tends to.  So, even after sitting a South American warehouse for over a decade, the Cobra De Hielo figures retain their white hue.  This alone makes the figure useful to collectors who otherwise have a high quality, V1 Stormshadow figure since they can use De Hielo as a the classic ninja without worrying about discoloration if the figure is left out on display.

Like most Plastirama figures of his era, the Cobra De Hielo has a few accessory variants.  In general, the figure seems to always include silver versions of the V1 Stormshaow's gear.  How much of that gear is required for the figure to be complete, though, varies by carded sample.  Many Cobra De Hielo's include the full complement of Stormshadow gear: including the backpack, long sword, short sword, nunchucks and bow.  However, it is also common to find the figure packaged with no backpack.  These versions might include the long sword, short sword, bow and nunchuks or two short swords, bow and nunchucks or a single short sword, bow and nunchuks.  In the end, each collector will need to determine if a figure is acceptably complete based on their own criteria.  But, since the full range of silver weapons are out there, that is the perfect figure should you have a choice.

For me, the value of this figure is just that: his accessories.  The silver swords and gear offer a visual break from the more often seen, black, American accessories.  It's fun to have a slightly different take on Stormshadow as part of displays.  And, when paired with the full set of swivel arm Plastirama figures, Cobra De Hielo fits right in.  Beyond that, though, this figure offers nothing that I didn't get in October of 1984 when the first Stormshadow figure entered my collection.  It's likely that the V1 Stormshadow mold is the most iconic figure from the vintage Joe line.  (Even if you don't agree, you'd be hard pressed to make any argument that doesn't have him in the top three.)  As such, seeing it in colors close to vintage automatically associates the release with the Stormshadow character.  It would have been cool to see the Ice Cobra character revisited through an amalgamated figure mold during the 2000's.  But, it was more important to get 6 versions of Firefly instead....

The Stormshadow mold has been the world over.  After the figure's long retail run in the United States, the mold was sent to Brazil where the Cobra Do Gelo was born.  It then went to Argentina for use on the three ninja variants.  The mold appeared again in the U.S. in 1992 as the Ninja Viper mail away and then was part of the Chinese exclusive figures that were manufactured sometime in 1994.  The mold, with the full accessory complement, had a triumphant return in the 1997 Toys R Us exclusives.  But, it was then not used again until the highly derivative Ninja Strike set in late 2004.  It's final appearance was in a 2005 comic pack, only with new arms.  Collectors are fortunate that Plastirama created the variants for the figure as Hasbro, for whatever reason, really dropped the ball with their repaints between 1997 and 2005.  We never got a Cobra Blue Stormshadow.  And, that's a glaring omission that no one has been able to correct.

In late 2000, the first waves of imported Plastirama figures from a warehouse find in Argentina began to permeate the U.S. collectors market. Through the first half of 2001, carded Cobra De Hielo figures could be purchased for around $15.  While the Satan and Ninja-Ku figures slowly sold out and started to get more expensive, the Ice Cobra lagged behind, usually more expensive than Sokerk, but slightly less expensive than TNT.  Over the next decade and a half, though, the supply of Cobra De Hielo figures has dried up.  Many savvy collectors realized that acquiring a carded vintage Stormshadow with the standard art for under $25 was likely not going to last and they bought them up.  While Satan, Ninja-Ku and Cobra De Hielo were all shipped in equal numbers in the same case, though, the Ice Cobra is substantially easier to find now than the two characters with whom he shares a mold.  While carded Satan figures routinely sell in the $300 range, Cobra De Hielo figures can still be acquired in the $60 - $75 range.  (Usually the higher amounts are reserved for figures with the full range of Stormshadow gear.)  If you can find a loose version, it will sell for substantially less.  But, few collectors of the early 2000's opened these figures.  So, loose samples can be a tough find.

Pristine, white American Stormshadow figures are now more expensive than carded Cobra De Hielo figures.  So, if you're in the market for an excellent Stormshadow figure, the Plastirama version is a nice alternative.  You don't have to worry about the figure yellowing and it includes the alternate, silver accessories which are a great upgrade from the black, American swords.  The fact that this is a different character is a neat conversation point.  But, the overall similarity to the iconic Stormshadow prevents the Ice Cobra character from really taking off.  But, as a figure, the Cobra De Hielo is a worthwhile acquisition.  He's a different take on the Stormshadow mold and is a nice complement to both Satan and Ninja-Ku: two foreign figures who have become staples of any American collection.  Personally, I wish I had been in a position to acquire many more of these figures back when they were cheap and plentiful.  But, I have enough now and enjoy the figure for what it is.  If you have a nice, American Stormshadow, the Cobra De Hielo is certainly not an essential part of a collection.  But, he's a neat way to expand the classic ninja molds and characters. 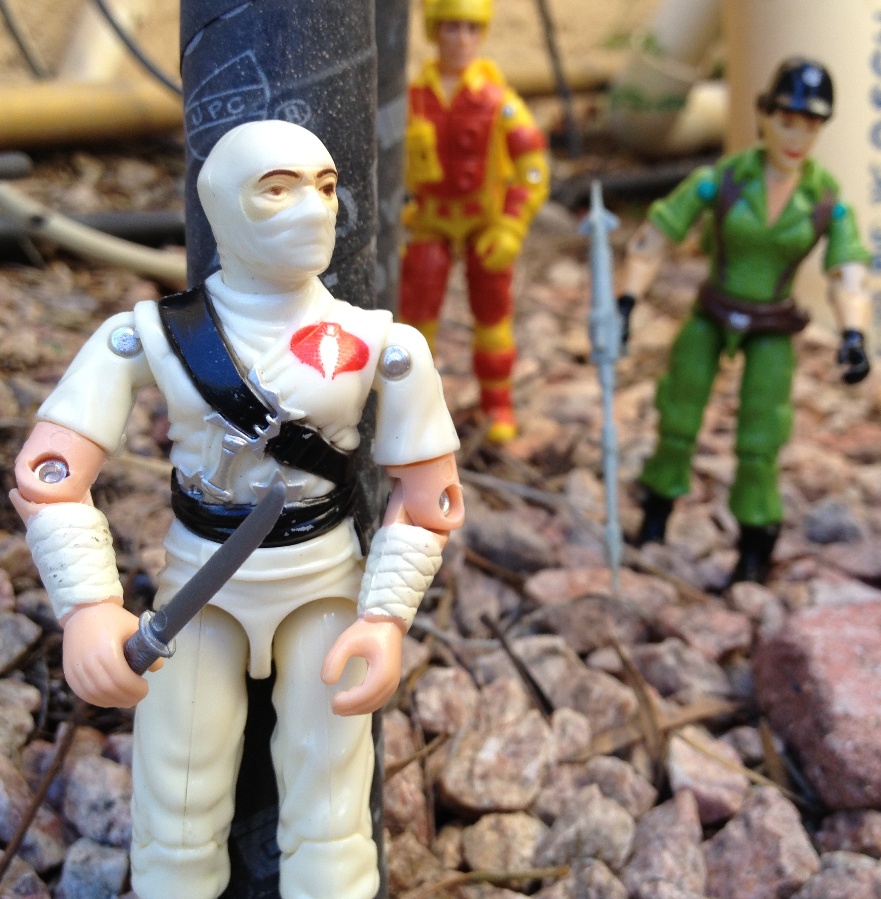 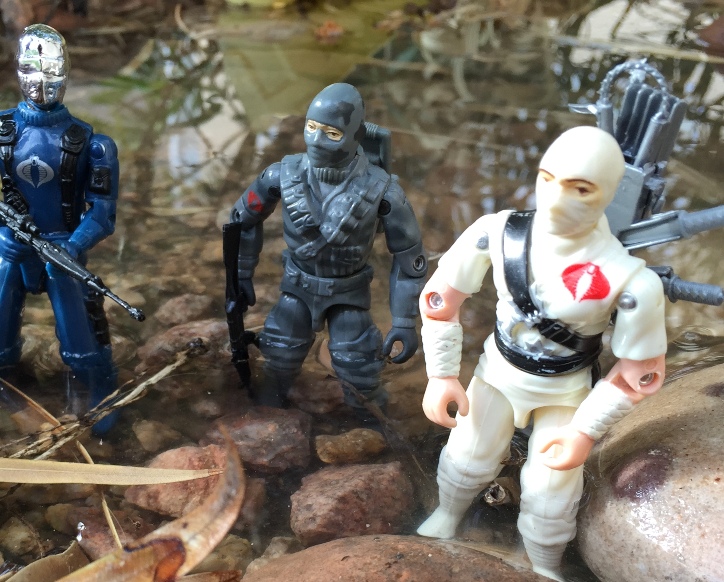