If you went back in time to the summer of 1997 and posted to Usenet or the Pit mailing list (how's that for dated technology!) that collectors would be sick and tired of the Firefly mold just 8 years later, you would have been laughed and flamed out of existence.  There was no way possible at that time that Hasbro would take such a beloved mold and make collectors rue the day it was created.  But, that's exactly what happened.  And, while the 2005 collector was REALLY sick of Firefly, by 2002 the mold was already becoming stale.  Collectors had seen the figure in 1998 and 2000.  As 2002 wound down, the third Firefly of the era, and the beginning of Firefly's diminished appeal, appeared: the Gift Set Firefly.

The repaint era of 1997 through 2006 created a large sea of banality in the Joe line.  When taken in retrospect, there is a lot of sameness throughout the years.  There are obvious gems as well as some real losers.  What was rare, though, was something so different that it's inherent oddity overcame the fact that the figure was pretty poor.  This Firefly is a perfect example of that.  The figure is cast in a basic red.  Not crimson, or any other red color associated with Cobra: bright red.  The figure is a better match for the Plastirama Satan than he is for the Crimson Guard.  If you can forgive the base coloring, though, you are left with a few other, bizarre color choices.  The figure's gloves and boots are copper colored.  It's a metallic copper paint that is easy to miss, but is basically unique to this figure.  Copper was not an oft-explored color in the Joe line.  So, its inclusion here adds to the uniqueness of this figure.  To complement the two inexplicable color choice so far is a greyish/blue accent paint application that highlights Firefly's holster, bandoleers and leg attachments.  Again, it's not Cobra blue and isn't, really, a great accompaniment to the bright red.  The figure is finished off with some additional, brighter red explosives and black grenades.  The crowning touch, though, is the brown head.  (The figure was dubbed the poo-headed Firefly by some at the time, but those with a more literary slant could refer to him as Gen. Scheisskopf.)  It's an odd topper to the figure and just completes one of the most head scratching color combinations on any figure in the entire line.

There is something to be said for figures that are so terrible they become good.  Figures like Rumbler, Big Brawler and even the Create A Cobra have all found collector followings just due to the absolute awfulness of the figure.  While this Firefly remains obscure, it has fascinated me.  There's something about it that makes me keep it around, even though there is no non-completist reason to do so.  The fact that the figure is so bizarre and out of place is the main draw.  This has no relation to the Firefly character I know.  (As an aside, there is an unproduced version of this figure available that replaces the base red with a green color.  It is a substantial improvement, but extremely hard to find.)  He really doesn't fit with any other Cobra figures.  Is this who Firefly really is and what he wears when no one is looking?  Or, is it a red herring and something Firefly dons when he wants to completely rattle anyone with whom he meets?  Either way, it's a uniform that gives some levity to the Firefly character.

The Gift Set which included this figure was an odd item.  An 8 figure set including Snake Eyes, Stormshadow, Dial Tone, Undertow, Fast Blast Viper, Wet Suit, Roadblock and Firefly, the Gift Set was packaged into a massive cardboard box that was logistically challenging to ship.  This fact is important as the Gift Set was only released regionally in the U.S.  The set was originally commissioned by the BJ's Warehouse chain.  At that time, they were only in slightly more than half of the states.  Some of their corporate partners, mostly regional grocery stores that also stocked retail items, eventually sold the sets, too.  But, the reality was that for many collectors, the set was simply not available at retail in their local market.  As the set was "exclusive" only a couple of online dealers were able to get any.  So, for those outside of the retail footprint, this set was extremely pricey.  Dealers rarely sold it below $35 and the large, heavy and overly long box added another $10-$12 for shipping to the cost.  After a few months, the retailers began to clearance the sets.  Many collectors were left rather non-plussed at the fact they had paid nearly $50 to get one set and were now hearing of collectors leaving stacks of them on the shelves at $12 in locales lucky enough to have a retail seller.  The result is that this was the only Gift Set ever created.  (Some dealers who acquired a supply had stock left sitting unsold for years after the set's release.)  And, beginning in 2003, Hasbro looked only to more national retailers for exclusive offerings.

One of the great things about the re-releases of Firefly was that they all included his original accessories.  Even the 2003 Wreckage, that used the Firefly mold, included the iconic gun and backpack.  There is one lone exception, though.  This Gift Set Firefly did not include any of his original accessories.  For most figures, this would be a huge detriment.  However, there are times when new accessory complements can breathe some life into a figure.  The Gift Set, largely, failed in this regard as figure included non-sensical accessories.  (Stormshadow with an AK-47, Wet Suit and Undertow with no flippers or underwater gear and Dial Tone with a bazooka.)  However, Firefly kind of works.

The figure includes a gun metal grey version of Beach Head's submachine gun.  (Oddly, this would not come with the Night Force Beach Head just 18 months later, but that's something for another time.)  In the context of Firefly, it is acceptable as it is reminiscent of his original rifle but gives him something different.  He also includes a silver version of Hit and Run's knife.  The fact that it's silver is great.  But, there is not a single vintage or repaint version of Firefly that includes any edged weapon.  For a character who was a ninja master, this is an odd omission.  So, finally having a figure with a knife is a solid addition to the character.  The figure is rounded out by a silver version of the 1991 Dusty's pistol.  It became a ubiquitous accessory in the repaint era.  But, the silver color is somewhat fresh and gives the weapon a bit of a shine for Firefly.  The last piece is a silver version of Firefly's original rifle.  In silver, this would have been an awesome upgrade to this figure.  But, alas, it has a fatal flaw: sound attack.  The rifle is not the classic version and, instead, has a massive sound tab on the side that renders the weapon useless.  For me, overall, though, this accessory complement only adds to the oddity that is the figure.  It makes is stand out even more and gives it a bit more cachet.  (And, if you really insist on classic Firefly accessories, they are now so common that it's easy to find a set from this figure's contemporaries and outfit him with those.)

As a collector, this is a great figure.  Not great in the sense that it's the definitive Firefly and should be included in every display of Cobra command.  It's quite the opposite.  If I could only keep one Firefly figure, this would be the first to go.  But, the figure is great because it's so different.  In an era where Hasbro tried so hard to placate collectors and so often misfired, it's refreshing to find some figures that defy that trend.  This Firefly is rather terrible.  But, that awfulness makes him awesome since he's so different from pretty much everything else released during his time.  Copper, brown, bright red and blue do not a classic figure make.  But, in this case, the combination creates something that's fun and odd.  The vintage line was good at doing that every now and again.  The repaint era mostly created duds.  So, the few times that Hasbro released something like this figure should be enjoyed.  The Gift Set Firefly makes my collection different and is so out of place among the rest of my figures that I have to appreciate him for the ugly duckling he is. 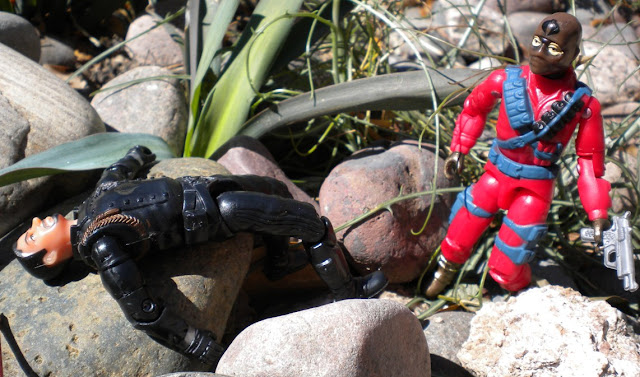 Posted by Robot_Sonic at 4:00 AM
Email ThisBlogThis!Share to TwitterShare to FacebookShare to Pinterest
Labels: 2002, BJ's Exclusive, Firefly, Retailer Exclusive