Hasbro introduced the Super Sonic Fighters line of figures in 1990.  These higher price point items included light up and sound producing accessories that were designed to be more "interactive" with the children of the era.  The bulk it took to achieve the sounds is comical now.  But, was pretty decent for 1990.  The added price, though, made these figures a tough sell.  But, the overall quality of the offerings in relation to the rest of the lineup from that year was right on par.  Some of the 1991 figures, such as Zap, Major Bludd and Falcon were excellent upgrades to existing characters.  Road Pig and Rock and Roll, though, were brightly colored repaints of pre-existing molds.  The final figure in the set, Psyche Out, is a hybrid.  The figure has a strong mold, an excellent head, somewhat lame accessories and a color scheme that leaves something to be desired.  The end result is a figure that is worth a place in any collection, even if that niche is somewhat small.

The Super Sonic Fighters figures retailed for around $7 each in 1991.  That was more than twice the going rate for a standard, carded figure.  Given the choice between getting 1 figure or 2 with some change for the same price, you can bet which way most parents and kids leaned.  The result was that the figures hung around for a while and were very hard to find on the second hand market for a long time.  Even today, the Super Sonic Fighters figures exist in substantially lower quantities than the other figures from the era.  It is only their reduced popularity among modern collectors that keeps them from being substantially more expensive.  It is that lower production, though, that also helps to keep the figures obscure.  You don't often see the figures utilized in dios or photos.  At this point, most collectors are aware of the figures, and may even own them.  But, they don't consider them among the more important figures that Hasbro released.  It's a fair fate for the Super Sonic Fighters.  But, there is hidden quality in the 1991 offerings that can not be ignored.

The Psyche Out character was rather popular, being released in his original incarnation, repainted in the American Night Force subset and then also appearing as a European Exclusive Tiger Force member.  This Super Sonic Fighters version updated the character and gave him a new uniform.  This entire mold then reappeared in India where Funskool released him for many years.  With 5 distinct vintage style releases (granted, two of them are foreign exclusives), Psyche Out was far more popular than most of this 1987 classmates.  So, there are likely more versions of Psyche Out than most collectors care for.

This 1991 version, though, is a drastic departure from the 1987 incarnation.  Gone is the 1950's era headgear.  And, in its place is a much more modern helmet and uniform that brings the character into a much more contemporary appearance.  The greatness of the figure is the headsculpt.  The helmet covering one eye is visually interesting.  But, with the communications device attached, the headgear is a visual treat and something that is not overly common on Joe figures.  The figure's body is less intricate as its, basically, a jumpsuit with some pockets and a strap.  The strap, though, is well placed so that some radar dishes can be added to the figure's torso to give the body added depth.  The legs are equally barren, save for a silver leg holster.

The overall appearance of the figure becomes somewhat problematic.  You have this great head on a fairly banal body.  And, the figure's primary base color is a dark aqua blue.  So, there's something definitely "off" about the complete package.  It's certainly not a Psyche Out you would include on a field mission.  But, the uniform does lend itself to several Joe specific environments.  He works in the HQ as a technician or adviser.  But, the best use would as a companion to Hardtop: either manning the ground control of the Defiant or being onboard as a specialist.  In this setting, the figure takes on more significance since the look fits the motif.  Sure, it's a specific use.  But, it is a way to use the excellent qualities of the figure within a setting that is more plausible.

Psyche Out's accessories are plentiful and voluminous.  But, they aren't great.  The headset/microphone piece is amazing.  It, alone, makes the figure worth acquiring.  But, the rest of the accessories fall off a precipice from there.  There are two small radar dishes that attach to Psyche Out's body.  It's neat to have an attachable accessory.  But, the are bulky, tend to fall off and generally don't add much to the overall appearance.  Psyche Out's "weapon" is a massive, sci-fi E.C.M. laser rifle.  It is huge, and blocky and really only works sitting the floor.  There's no real way for the figure to handle it smoothly.  The weapon is rounded out with a large radar dish that attaches to the barrel and a hose to connect to the backpack.

Psyche Out's backpack is massive.  All of the Sonic Fighters packs are large to accommodate the light and sound technology of the day.  The nice thing is that they can be used as sort of stand alone playsets.  For more of the figures, this is a stretch.  But, for Psyche Out, it works.  His technological bent and laser rifle fit into the motif of the pack and make it somewhat usable...even if the size would make it useless as a field weapon.  The grey pack features three plug in accessories: a small radar dish, a larger radar dish and a small antenna.  With these on the pack, it takes on more of a playset vibe.  (Of course, they also make getting a complete figure that much harder!)  Of final note is that the pack has two variants: one with a peg for the hose to attach to.  And, another where there is just a hole into which the hose plugs.  They appear with similar frequency (I have acquired 2 Psyche Out's in my decades of collecting and got one of each without even trying.) and really don't have an impact to the figure's pricing.  My personal preference is the hole model as the peg is rather large and most hoses will quickly detach until you've stretched them out to the point where they are useless for other figures.

This figure's pricing and availability are problematic.  Psyche Out is actually rather hard to find if you want him mint and complete.  A figure with all his gear and filecard will cost between $20 and $25 these days.  Carded versions will be more expensive.  But, the figure isn't easy to find in either incarnation.  The small accessories and obscure release make it difficult to find this guy in mint condition and complete.  However, the Funskool version included the same accessories (though the antenna is grey instead of black) and was available for a long time for under $5 in the U.S.  It's likely that this Funskool version helps keep the price of the American figure down a bit.  Which is good as the mold is worth acquiring and the gear just makes the figure that much better.  The Funskool versions are pricier now, though, and will often run $10 plus shipping for a carded figure.  But, that's still a lot less money and hassle than finding the American version.  So, I recommend that as an alternative.  But, every collector should have a version of this figure.  He's oddball, but in a good way. 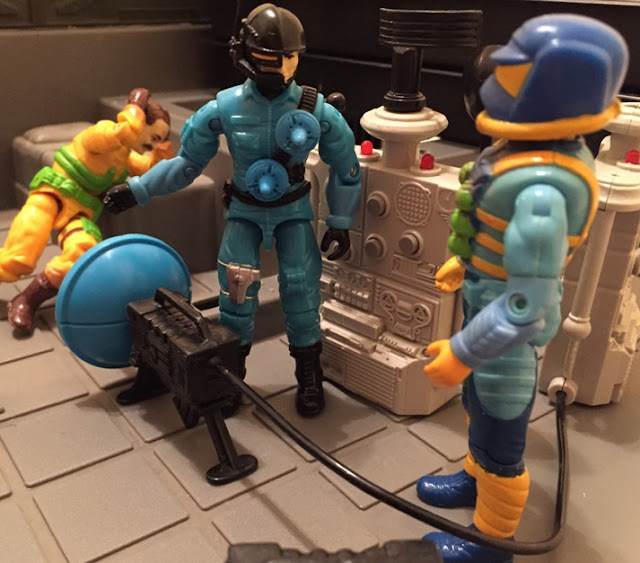 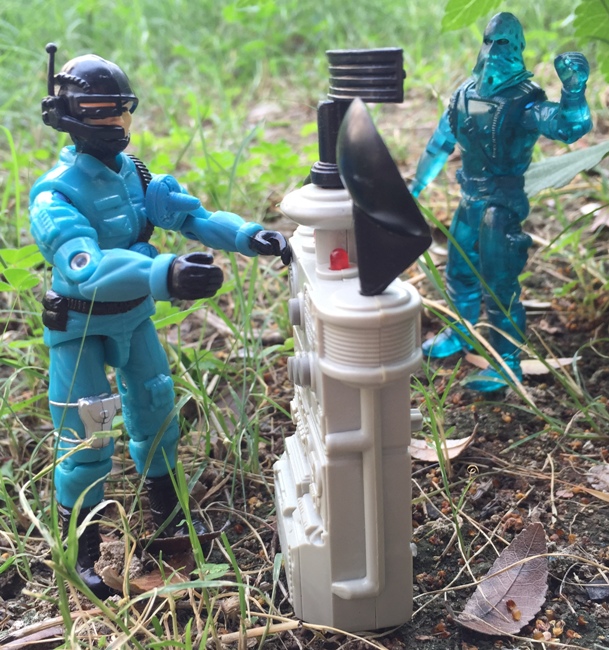 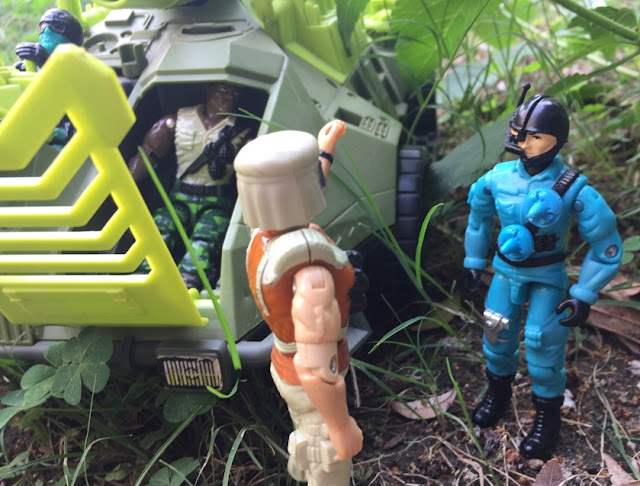 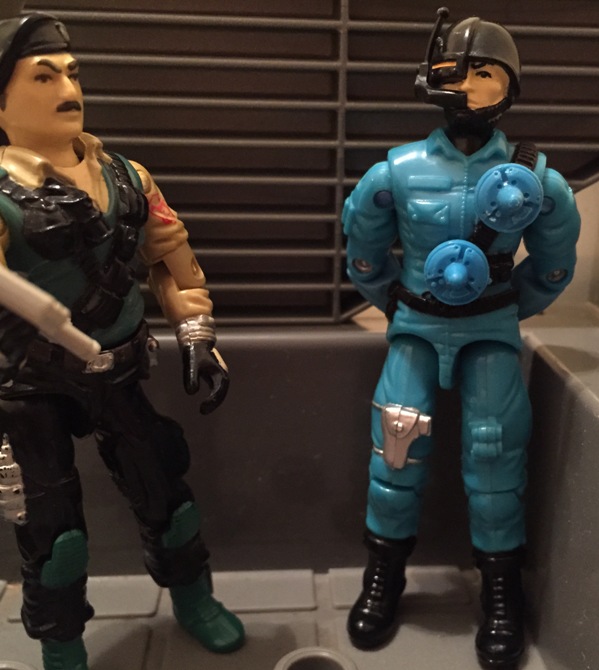 Posted by Robot_Sonic at 9:26 PM
Email ThisBlogThis!Share to TwitterShare to FacebookShare to Pinterest
Labels: 1991, Psyche Out, Super Sonic Fighters