I was late to the G.I. Joe party in 1983.  But, I spent the second half of the summer catching up with all the kids in the neighborhood who had gotten on the Joe bandwagon sooner than I had.  There was one kid who lived around the block who pretty much had everything that was released at the time.  Each time I went to his house I found more new items that just further cemented my interest in the property.  As the summer wound down, he went to visit relatives and was gone for a week.  When he returned, he brought back several new figures to show off.  The most interesting were the Cobra Officers and Cobra Troopers.  He got multiples of each, though they were the straight armed versions.  I remember playing with them at the local pool.  I liked both figures.  But, figured that the Officer was the more basic grunt character since he had a less interesting mold and included an AK-47: which was the standard "bad guy" assault rifle of the time.  I did not like the fact that the cooler figure that I wanted to use as a character was actually the grunt and the figure I wasn't interested in was the higher ranking officer.

This disappointment was enough to sour me on the Cobra army builders of the time.  I focused my efforts on Cobra Commander, Destro and Major Bludd.  The Cobra characters were much more interesting.  At some point in 1984 or 1985, one of my younger brothers acquired a Cobra Officer.  However, they quickly lost his gun, rubbed away the logo and generally destroyed the figure.  The Cobra Trooper entered my collection in 1985, just before he disappeared from retail.  The Trooper saw quite a bit of use until the standard Viper was released the following year.  The result is that the Cobra troops in general were not a big part of my childhood.  And, the Cobra Officer was much less a part of it than the Trooper.

The Cobra Officer mold is classic 1983 awesomeness.  In the simplicity of a blue fatigues wearing terrorist is what makes the figure enduring.  The simple web gear, standard masked face and molded on helmet portray the character as a definitively evil.  They also, though, give him an air of danger as he is definitely wearing a uniform: suggesting that the organization who employs him is vastly more dangerous than a bunch of extremists in the woods with weapons that are relics of a bygone age.  The Officer is at the forefront of an organization that not only wants to take over the world, but has the money, technology, equipment and training to do so.  It was a frightening concept and helped create an initial dichotomy between the Joes and Cobra that cemented the hero vs. villain archetype.

The Officer also succeeds in combining the two most real sources of evil and paranoia of the early 1980's.  The early Cobra in the comic book had a heavy Nazi-esque look and feel to them.  They were designed to instill the sense of evil that was brought on by Nazi imagery.  Replace Cobra blue for Nazi colors and you have a pretty stark similarity between the two.  On top of that, the Cobra Officer was given an AK-47.  At the time, this was the personification of the Russian military.  Outfitting Cobras with Russian built weapons implied they were in league with the communists.  There was no better way to visually saying these were the bad guys in Reagan era American than by including the iconic Russian weapon.  The combo ensured that Cobra was the villain and that G.I. Joe was here to save us from the bad guys...with the subliminal message being that the U.S. would triumph in the Cold War.  It was this level of visual subtlety that helped to cement Joe in the conscience of American boys in the 1980's.

As a part of my collection, though, the Officer continues to simply not be overly relevant.  One of the great things of the vintage comic was that there were ancillary characters who helped bring stories to life without expending the usefulness of primary characters.  Scar Face was one notable example of this.  And, it was through Scar Face that I have seen the Cobra Officers as a group more worth exploring.  While the Cobra Troopers and Vipers are faceless legions of largely uneducated, easily manipulated thugs: Officers have more of a backstory.  They were the disenfranchised military from around the world who found something about Cobra intriguing.  Maybe they were wanted criminals.  Or, they simply grew tired of the low pay and high cost of serving in the military of an established government.  But, the Officers were among those with access to the early Cobra Commander.  Here, they established Cobra's military theory and practice.  Many of them showed the scars of combat experience.  But, there was something about them that distinguished them to the Commander and made them his trusted advisors...at least until more named characters came along.  Had the Cobra Officer been presented more in the this vein, I think he would be more interesting to me than a higher ranking faceless legion who wears a different uniform than the cannon fodder which he oversees.

The Cobra Officer mold was also a world traveler.  The straight arm mold was sent to South America where versions of the Officer that are similar to the American figure were released in Argentina, Mexico and Brazil.  The swivel arm version was used by Palitoy in Europe in the Action Force line.  There, the mold was released as a good guy vehicle driver named Hunter.  Hasbro got back the Officer mold and continued to produce him for years as a mail away.  (It was also repainted in 1984 as the Stinger Driver and 1989 as the Python Trooper. - Mr. Acer's comments below!)  In 2004, Hasbro remolded parts of the body for release in the Toys R Us exclusive Cobra Infantry pack.  Less than six months later, though, Hasbro announced they had actually found the vintage molds and parts of it were used for the 2004 Comic Pack Officer and in 2005 for the Cobra Night Watch sets as well as 2006 for the Comic Pack Gas Mask Trooper.  The chest appeared a final time in 2010 on the Convention Exclusive Jammer figure.  All in all, there are a lot of Officers out there.  While it would have been nice to get a Crimson Officer or all black Officer, that was never to be.

It is no secret that the silver Cobra logos used in 1983 are extremely fragile.  Viper Pilots are notoriously brittle and finding mint figures is very difficult.  The Cobra Officer likely has a similar ratio of damaged logos versus non damaged logos.  However, two factors play into the Cobra Officer's greater availability.  First, the Officer was produced in much greater quantities than the Viper Pilot.  The Officer was extremely popular and Hasbro probably produced untold numbers of them.   The second factor is that the Cobra Officer was available for many years as a mail away figure.  This allowed kids to acquire the Cobra Officer for a long time after the figure was discontinued at retail.  This also lead to overstock that simply never sold.  In 1999, collectors found some of this overstock at Hasbro Canada.  Thousands upon thousands of bagged figures were released into the market for $1 each.  Among these were tons of Cobra Officers.  This allowed collectors of the time to both pick up bagged versions, but also open them and build up mint condition armies.  In the 16 years since that find, the overstock Officers have mostly been absorbed.  But, there are a lot of mint condition figures out there that can trace their beginnings to the Hasbro Canada find.

Mint and complete with filecard Cobra Officers tend to sell around the $30 range.  In comparison with the Cobra Trooper, that is a substantial price increase.  However, the more easily damaged logo combined with the fact that there are large numbers of bootleg Cobra Troopers in the marketplace explains away the disparity.  What's odd is that sacrificing just a little bit of logo condition only lowers the price by $8 or so.  Usually, gem mint figures with logos like the Officer sell for premiums and slight condition degradations fall off a pricing cliff.  The result is that I find the Officer to be overly expensive for the value he brings to a collection.  I'd rather get two, mint and complete Cobra Troopers instead of one Officer.  And, as such, I have just this one Officer in my collection, commanding the more than a dozen Cobra Troopers (more if you count bootlegs).  Others may prefer the Officer mold to the Trooper.  But, for me, one is enough.  I'm sure that had I bought a dozen of these from Hasbro Canada, I'd be happy with the lot.  But, since I didn't, I don't feel the need to go out and get any more of the figure.  I'm content with my Cobra army command structure.  For others, the mileage from this mold and character may vary. 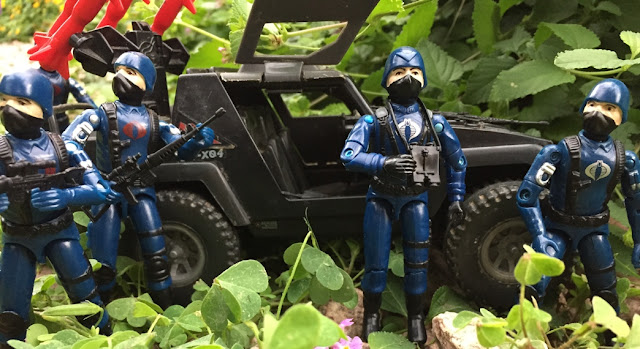 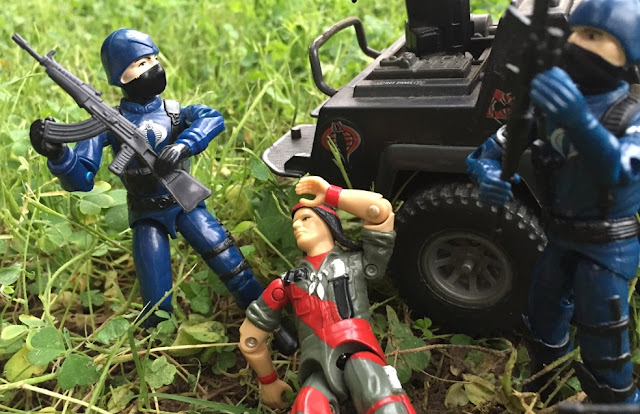 Posted by Robot_Sonic at 4:30 AM
Email ThisBlogThis!Share to TwitterShare to FacebookShare to Pinterest
Labels: 1983, Cobra Officer