At various times in both my youth and as an adult collector, I have become somewhat obsessed by certain aspects of the Joe line.  Throughout my collecting years, I have found Star Brigade, 1993 repaints, foreign figures and army builders to be the singular focus of my collection.  For whatever reason, something about a particular subject grabs a hold of me and a portion of collecting that I had, previously, largely ignored becomes the single most important part of my collecting experience.  I can trace this behavior, though, back to my childhood, too.  Even in the mid 1980's, I would occasionally find some obscure aspect of collecting that had never been any of my concern and see it completely dominate the way I spent my collecting dollars.

In late 1986, that obsession turned to the small vehicles and playsets that I had seen hanging on the shelves of Toys R Us and Target for several years.  Items like the machine gun playset, the mortar range and the Mountain Howitzer had been toys I had seen at the stores.  But, their lack of figures and small size left me uninterested in them.  (Much of this can be traced to my absolute disappointment with the Pac Rats and SNAKE Armor from 1983.)  As '86 wound down, though, I had purchased all the figures and vehicles that were feasible for me to acquire.  (The Terrordrome and USS Flagg were simply too expensive for me to buy on my own.)  With little left to buy, I started eyeing these playsets and vehicles that were largely used to keep dust off the floor at the local toy shops.  With no other options left for new toys, I started buying up these small items.  Within my first purchase, though, I realized how cool these low cost supplements to a collection really were.  So, for the final part of the year, I spent my time tracking down as many of these sets from '84 through '86 that I could find.

One of the hidden gems was the Bomb Disposal.  Ostensibly, it was a vehicle used to defuse undetonated ordinance.  Once I had it in hand, though, huge realms of play were opened up to me.  The vehicle was perfect as a means of carrying bombs and missiles to awaiting aircraft.  It could be used as a bulldozer.  The arm could carry a captured prisoner.  But, the best use was as a mobile shield for Joes.  The huge, armored plates that protected the driver from explosions were also perfect for shielding Joes as they advanced on a position.  A small team of soldiers would line up behind a Bomb Disposal as it drove towards an enemy positon: the bullets harmlessly bouncing off the forward facing armor.  With this little vehicle, the Joes had a way to take out Cobra installations without facing harsh fire.  It was a great way for them to deal with entrenched Cobras and made the Bomb Disposal a vehicle that Cobra often targeted for destruction at the beginning of an engagement, often ahead of vehicles like the HAVOC or Mauler.

As a vehicle, the Bomb Disposal is well detailed.  It features little items like a smoke stack, dual control rods and corrugated steel face plates.  On top of that, it was given a tow hook as well so the Bomb Disposal could tow Whirlwinds, Howitzers, HALs or any the other Joe playsets that were not self propelled.  It was a great way to integrate the Bomb Disposal into the line's existing construction and allowed for much greater play possibilities since it was easy to incorporate the Bomb Disposal with existing vehicles.  The arm and bulldozer blade have gripping teeth and realistic patterns that give them depth.  The actual arm would have been much cooler if it had more moving joints (though that might have made it too floppy for play) but the sliding slots on the vehicle's base that allowed for the arm to move forward and backwards and grip different sized missiles was a neat little addition that made the vehicle seem more valued than it's low cost would suggest.

It was the detail on these little vehicles and playsets that kept me enthralled with them through my final childhood years.  Things like the bullet holes on the wall of the mortal playset, the stacking sandbags and the ammo dumps crate opened the Joe world up immeasurably.  They were the little things that, when coupled with the larger vehicles and playsets, really set the Joe line apart.  The Hasbro Machine Gun nest wasn't brittle, cheap molded plastic.  It was mold injected plastic with assembled parts that all had layers of small details that, when put together, looked like a full blown toy.  No G.I. Joe HQ was complete without a Checkpoint Alpha, Law, Machine Gun Nest and many others surrounding it.  It took a great playset and made it epic.  It also kept the Joe line integrated with itself, even years after a toy had been discontinued.  The Bomb Disposal was a part of those small details that greatly accentuated the main figure and vehicle line.

The main difference between the Funskool and Hasbro Bomb Disposal vehicles is the color of the arm and shields.  The Hasbro versions are a standard charcoal color that was common on vehicles of the era.  The Funskool version, though, released these parts in jet black.  It is a striking difference: especially when combined with the deeper green color that Funskool gave to the base vehicle body.  The result is that the Funskool release is far more visually striking.  It has a sharp contrast between green and black.  In comparison, the American version is more subdued.  And, likely, more realistic.  But, as a toy, I prefer the Funskool's versions deeper color palette.  It is something different (though the color is common to Funskool vehicles) that appeals to colors I enjoy.

The Bomb Disposal was released in the U.S. in 1985 and 1986.  It then saw a second life as a mail away for several years.  It is likely, though, that the mail away items were overstock, or a single production run that simply took a while to sell off.  In the late 1980's, the vehicle showed up in Argentina where it was released by Plastirama in colors similar to the American vehicle for a while.  About a decade later, the Bomb Disposal appeared in India where this Funskool version was produced.  Funskool produced the Bomb Disposal for many years.  It's possible that there are variants of this vehicle within the various Funskool production runs.  But, they are most likely "unintentional" variants where the plastic mixture was slightly different and the hues of the base colors have some differences.  (This is common on Funskool figures that were produced at different times in different production runs.)  However, there have not been any variants defined at this point.  The mold likely died in India and it is either still there, or was destroyed by Hasbro.  It would have been nice to see some sort of additional color scheme on this vehicle.  But, since its role is one of support and background work, it's not a great travesty for it to have never been repainted.

Through the 2000's, Funskool Bomb Disposals were fairly cheap.  Many American toy dealers had access to them and you could get sealed, boxed versions shipped for under $15.  In the years since, though, the supply has dried up and you see higher prices.  Granted, not too many sell for those higher prices.  But, getting one on a whim for cheap is extremely difficult without substantial patience these days.  If you want the vehicle, the American version has more realistic colors, better availability and is much, much cheaper.  So, that's the best way to go.  But, as an alternative, this Funskool version is very nice.  The deeper green is a color that I enjoy and it helps bring some diversity to a vehicle collection. 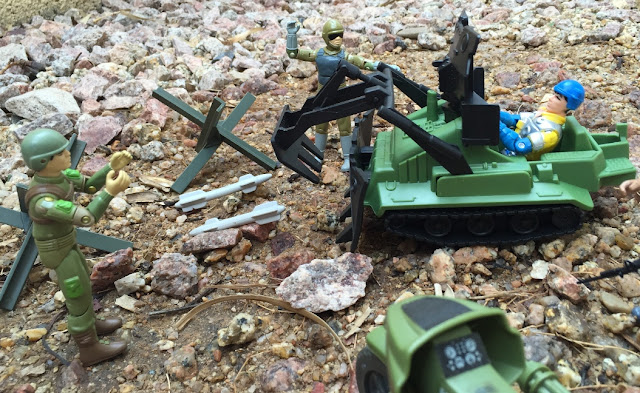 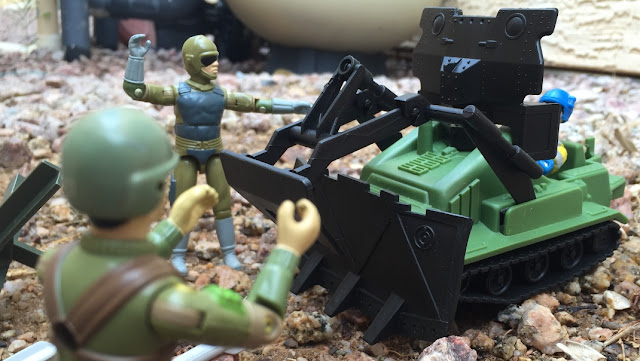 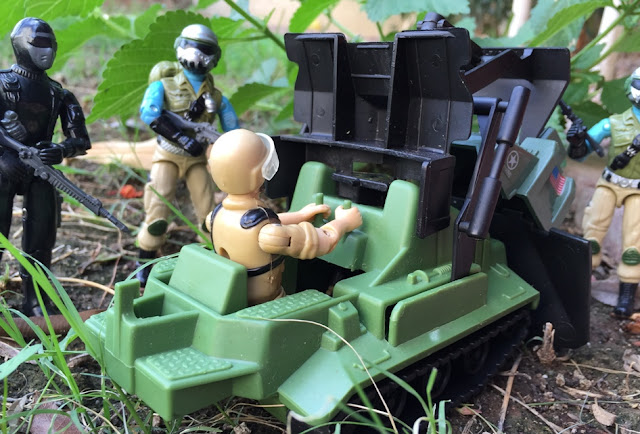 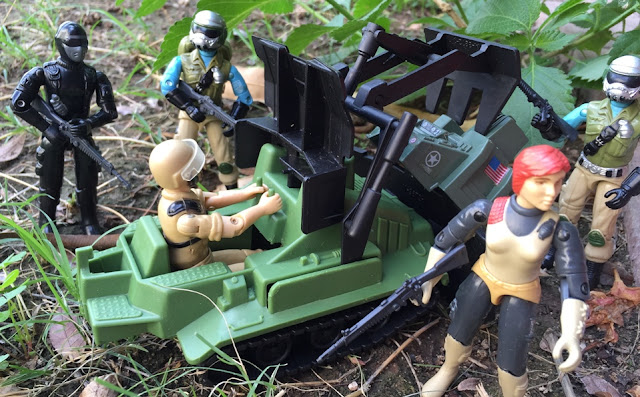 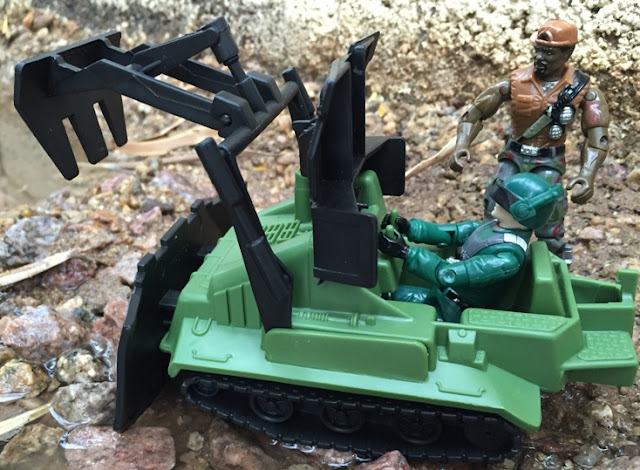 Posted by Robot_Sonic at 8:28 AM
Email ThisBlogThis!Share to TwitterShare to FacebookShare to Pinterest
Labels: Bomb Disposal, Foreign Figures, Funskool, Vehicles