There was a time when Serpentor was the great divide in the Joe community.  Early comic devotees who collected from 1982 through 1985 wanted no part of him.  (Even though he had a good run in the comic.)  Younger cartoon fans were enthralled by the character and held him as the greatest Cobra leader.  This was the first real schism in the Joe world.  As years passed, these early groups sort of bonded together as younger still collectors came on board who were fans of the '90's Joe characters.  Now, it seems much of this animosity has passed as the community as a whole is much more mellow.  Plus, many of the modern renderings of Joe be it comics, toys or the movies have created a new divide among collectors that keep the general bickering around.

For me, Serpentor was still a line of demarcation.  After his release, the Joe line changed.  Part of that was I was older and more aware of the realism, or lack thereof in the offerings from 1986 and later.  But, the other part was that with Serpentor's release, there really was a new Cobra where the figures of Destro, Major Bludd and Cobra Commander had been left behind.  The original Cobra command cadre was a blend of military, terrorist and arms dealer that grounded the organization in reality.  It was possible to imagine that such a group could exist, though, with less military resources.  In 1986, though, the Cobra villains took a leap from their military roots and became more comic book super villains.  Dr. Mindbender, Serpentor and Zarana were the type of figures that would make for better television as over-the-top villainous archetypes.  (Don't get me wrong, all the cartoon Cobras were pretty over the top, much more so than their comic book contemporaries.)  Their more garish outfits, brighter colors and outlying specialties really made the G.I. Joe mythos more about fantasy and science fiction than true military realism.  Really, this infusion of a new direction is likely what helped Joe last so long.  The line evolved as new kids grew into the desired age range to buy the toys.  With minimal stagnation, Joe was able to outlast pretty much every action figure line that had come along to that point.

I was enthralled with the Serpentor character when he debuted.  There was enough science behind the fiction to make the backstory believable.  On top of that, the search for long dead historical icons was a touch of Indiana Jones that made the story even better.  (In fact, it was the addition of Hannibal that spurred me to read as much about the general as I could find.  Just another example of how the Joe line really affected my intellectual curiosity.)  As such, I was extremely excited to acquire a Serpentor figure.  I found my first one in the spring of 1986.  But, as I had no money, had to hide it another aisle in hopes it would be there when I came back with some cash.  I returned the next week with a fresh stack of lawn mowing money and was able to acquire my first Cobra Emperor.

Serpentor quickly became the de facto Cobra bad guy.  He lead Cobra troops into battle with great success.  But, it was his personal combat ability that was most consternating among the Joes.  The simply could not beat him.  Serpentor would match up with the best the Joes had and always come out ahead.  Whether it was evading capture in his Air Chariot or simply beating a Joe to a pulp, Serpentor was always one step ahead of the Joes.  The problem with this, though, is that the character got stale.  Having him so powerful was no fun.  Slowly, Serpentor was defeated a few times.  But, even that played itself out.  To me, Cobra was about the man who founded the organization.  His group of commanders was small, but had known motivations.  It was too much to believe that Serpentor would come into a tight knit group and completely sway the loyalty of the entire command.

So, there were few places for Serpentor to go.  Ultimately, I had to kill him off.  There was simply no way for the character to continue on.  However, the threat of Mindbender bringing Serpentor back was a good sub plot line for a while.  In time, though, I found another use for Serpentor.  I always felt that Destro and Hawk would have had a respect for each other as soldiers.  With this respect would come a moderator.  Someone who was a soldier, politician and diplomat who understood the workings of the U.S. military and Cobra.  This older outsider would possess a sagacity that made him invaluable to the two high ranking officers.  While this wasn't the Serpentor character, it was represented by the figure.  This character would welcome Destro and Hawk to secret summits where the three of them would ensure that the Joe vs. Cobra conflict would not escalate too far.  If Cobra Commander acquired nuclear weapons, Destro would inform Hawk through this character so that the Joes could intercede before the Commander could use them.  Having a conflict where men died was fine with this character since the Cobras and the Joes voluntarily signed up for the hazards.  But, if there was an escalation that threatened large swaths of civilians, this character would act.

The Serpentor mold is pretty much relegated to the character.  The snake armor motif doesn't lend itself for use with other figures or characters.  So, the look really defines Serpentor.  But, the armor is still well detailed.  The snake head helmet on the figure is not removable, but Hasbro went so far as to sculpt a face beneath it.  There are really three key details of the mold, though, that show the care the vintage designers took with the figure.  First is the snake teeth on the helmet.  These keep the snake motif, but are also a great little detail that could have been omitted to save money.  The next detail is the silver electronics on Serpentor's right arm.  I don't know what this is, but it's something that breaks up the gold and green and brings some depth to the figure.  The final detail is the snake fangs molded on Serpentor's gauntlets.  As a kid, I used these as poison filled spikes that made any punch from Serpentor lethal.  It's a small, often overlooked feature but makes the mold that much better.

Accessory wise, Serpentor was both great and weak.  The Roman inspired knife is a great homage to the character's roots.  But, as a primary weapon, it is rather limited.  The main issue with Serpentor's accessories, though, is that they are required to fully appreciate the figure.  Serpentor included a green cape and golden snake hood "backpack".  Affixed to the figure, they brought a regality to Serpentor that the base figure mold lacks.  To this day, I can only use Serpentor if he includes the cape and cowl.  Without them, the figure is too bland.  (You can see the difference in the pictures below.)  Serpentor also included a plastic Cobra.  There are some color variants of this snake in both green and gold.  It's a small detail, but worth noting for completeness sake.  The final piece of Serpentor's arsenal (and the reason he didn't have any firearms) is the Air Chariot.  This flying contraption is goofy as can be, but works with Serpentor.  It just fits him perfectly.  As a kid, it was the Air Chariot that caused the most damage to the Joes with Serpentor dismounting from it only in extreme situations.

The Serpentor mold did not see a great variety of uses, but was around for a good long while.  After the figure's retail run was complete in 1987, Hasbro still released Serpentor as a mail away for many years.  Huge quantities of Serpentor figures were offered by Hasbro Direct all the way into the 1994.  This has lead to mint in bubble Serpentor figures still being a relatively easy find today.  In 2002, Hasbro resurrected the mold for the Wave V Internet Exclusive Serpentor figure.  This is probably the best Serpentor release, but was extremely limited and remains the most difficult to find today.  In 2005, Hasbro retooled the head and released a Comic Pack Serpentor figure in very bright colors.  This isn't a terrible figure by any means and the removable helmet is a nice touch.  (If you can find one, there is a Midnight Chinese version of this figure with green hair.  It makes no sense, but is odd enough that it fits with Serpentor's character.)  After that, the mold was done.  Serpentor never appeared in any foreign countries or subsequent releases.  The general specificity of the mold did not make it conducive for use with other figures.  So, Serpentor fans are left with but three appearances of the favorite character.

Serpentor figures are notoriously brittle.  The golden plastic used to make the figure is well known in the collecting community for it's tendency to break down and degrade in short amounts of time.  This means that while there are many mint Serpentor figures out there now, it is likely that even well cared for figures will slowly break with minimal movement in time.  (As a note, I broke the crotch of one of my Serpentor figures trying to replace his O-Ring in preparation for the photos for this profile.)  So, while the figure isn't difficult to find today, time may change that.  Mint and complete Serpentor figures sell for around $30 if they have the filecard and Air Chariot.  Foregoing the Air Chariot will drop the price into the $12-$15 range.  A perfect cape specimen will sell for more.  But, frugal buyers can still find deals since the figure exists in such quantities.  For the money, I'd buy a version 2 Serpentor figure since the black is more regal and the plastic is less brittle.  But, considering Serpentor's place in the Joe mythos, it is difficult to ignore this original version.  At any rate, every collector needs a Serpentor figure in their collection. 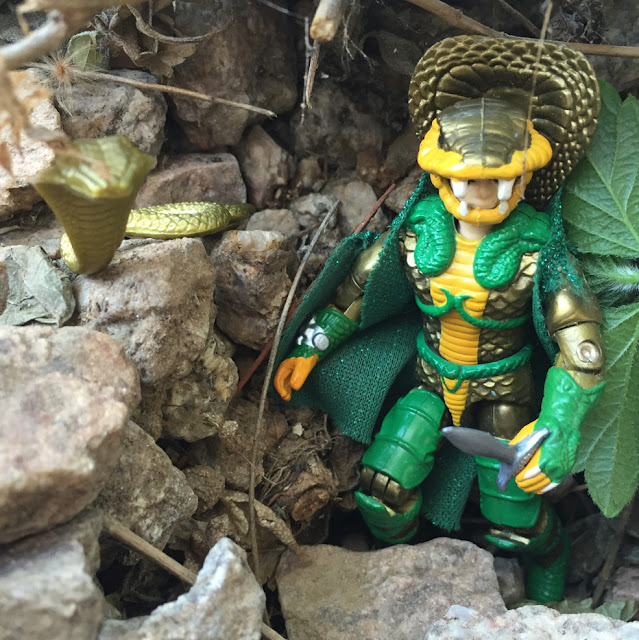 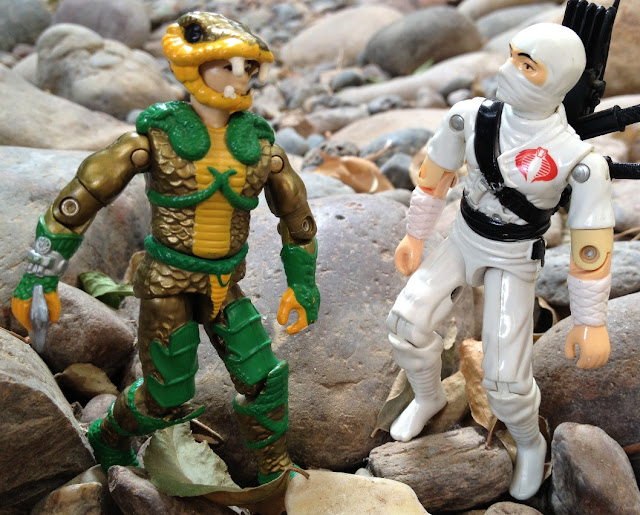 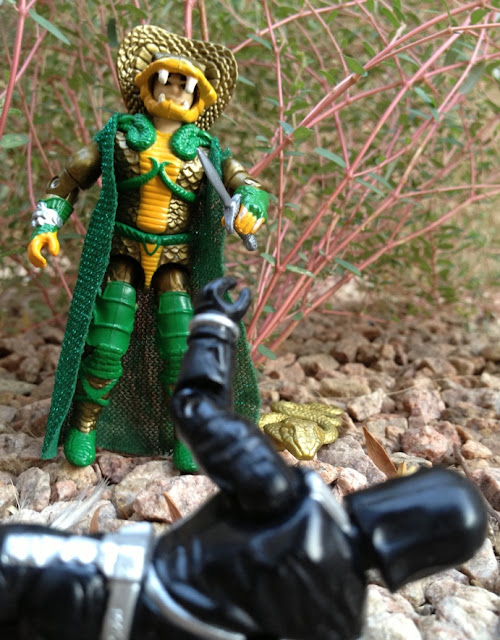 Posted by Robot_Sonic at 9:24 AM
Email ThisBlogThis!Share to TwitterShare to FacebookShare to Pinterest
Labels: 1986, Serpentor