The early 1990's brought about a mainstream environmentalism.  It was more of a subtle consciousness rather than a blunt truth, but was effective in making kids aware of their environment.  By this time, the Joe line was no longer the innovator in the toy aisle.  While it had defined the action figure space in the 1980's, that was no longer the case as we entered the century's final decade.  Hasbro was chasing gimmicks in a vain attempt to capture lost market share.  But, the Cold War was over and kids were looking for something new.  In 1991, Hasbro obliged them with the introduction of the Eco Warriors subset.  This team of environmental warriors featured bright, neon colors, paint that would show "battle damage" based on temperature and working water guns.  It was a gamble to compete against the brightly colored toys that defined the time.  The result is a group of figures that collectors generally disdain, even though their design is easily on par with figures from many other years.  The leader of the Eco Warriors was the fan favorite character Flint.

I can't look at this figure and not see a rebel pilot from Star Wars.  Turn the green orange and the yellow white and you've got yourself a close enough facsimile of the classic pilot.  Really, I would have loved a repaint of the mold in that vein.  Due to that resemblance, my first uses for this figure were as a pilot.  He fit nicely into the Razorblade and was, for a time, my go to pilot for that chopper.  As soon as I had a 1992 Ace figure, though, that role for Flint disappeared.  But, the general design and good helmet kept him around as a generic pilot for other aircraft until I was able to acquire enough Ace figures to render Flint's involvement moot.

The real value of the sculpt, though, is the head.  Flint's head is exceptional.  It has fine detailing in the hair, chin, cheeks, nose and eyes that you didn't see in the 1980's figures.  It was a leap forward in terms of figure sculpting and showed that nearly a decade of experience had really upped the designer's game in terms of new figures.  The rest of the body follows.  While the overall suit isn't greatly detailed, it has lots of folds and creases that denote movement and wear.  They are little, often overlooked, details that showcase the thought that went into the figure's creation.

My first exposure to the Eco Warriors was in the comic.  I was in high school and not collecting toys, but still read the comic fairly regularly.  The villainous Cesspool seemed interesting and the entire concept of Eco Warriors was, in my opinion, handled fairly well there.  When I started collecting Joes again a few years later, I found the brightly colored figures.  Neon paint doesn't frighten me away from a figure.  And, after I acquired a large lot of figures that included a complete set of Eco Warriors, I was surprised at how much I enjoyed the molds.  They were all well done (I was familiar with Ozone from the Star Brigade figures I found on clearance in the mid 1990's.) and the colors meshed well together.  They were a departure from the more traditional Joes.  But, part of what makes the Joe line so great is that there is a wide variety of figures from which to choose.  If you don't want the neon, there are plenty of good figures who don't use it.  But, when you have over 1,000 unique figures, you don't want them all to be the same.

The figure's accessories are OK.  The helmet is well designed.  But, the mesh covering on the lower half of Flint's face is lost in transaction.  Rather than showcasing this different idea, the helmet appears to be a bulkier, fully protective piece.  This isn't bad as it's probably more practical.  But, it would have been cool to see the actual mesh worked out on the figure.  The rest of Flint's gear is the standard water backpack, hose and squirting gun that are the hallmark of the Eco Warriors line.  The weapons are interestingly designed.  And, they are quite compact for what they actually are.  (Oddly, they showed up both with the Brazilian Forca Eco figures, some Street Fighter Movies figure and again in the Bronze Bombers set from Olmec.)

The Eco Warriors Flint mold was used just one time in the vintage line.  The parts never showed up again anywhere else in the world.  In 2001, Hasbro showcased a new vehicle based on the VAMP named the Desert Striker.  The initial photos of the vehicle included a new version of Dusty as the driver.  The prototype was a repaint of the high quality 1991 Dusty mold.  When the vehicle appeared at retail, though, the Dusty was gone and was replaced with a desert repaint of this Eco Warriors Flint mold.  While the Flint head is high quality, the desert color really didn't lend itself to the mold and the figure just seemed odd.  Plus, the Desert Striker didn't include any accessories.  Had it included even a black helmet, it might have been better accepted.  The failure of the Desert Striker figure pretty much doomed collectors to never see the Eco Warriors molds again.  Really, this Flint would have been an excellent member of the Anti Venom set.  A repainted Clean Sweep would have also been welcomed.  Hasbro did dust the mold off a final time in 2010 when the body was used for the truly terrible Red Torch convention figure.  This figure was ruined by an awful head that didn't match the vintage style.  But, at least this mold saw some reuse.

Eco Warriors figures are very unpopular.  As such, they are stupidly cheap.  MOC figures can be purchased for around $10.  Mint and complete with filecard figures sell for around $5.  In lots, you can get them even cheaper.  No one really wants the figures and most people who have it keep it packed away.  The bright colors, less than popular subset and general collector disdain will forever doom this figure to obscurity.  If you're looking for an underappreciated gem, though, this Flint is a perfect example.  The sculpting is good, the coloring is a sign of the times and the mold has a lot of value.  It's just never going to be monetary. 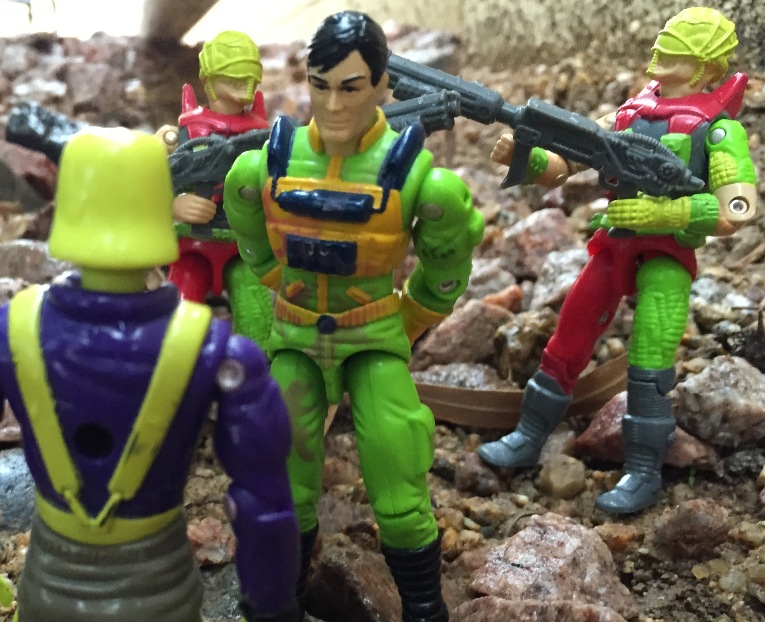 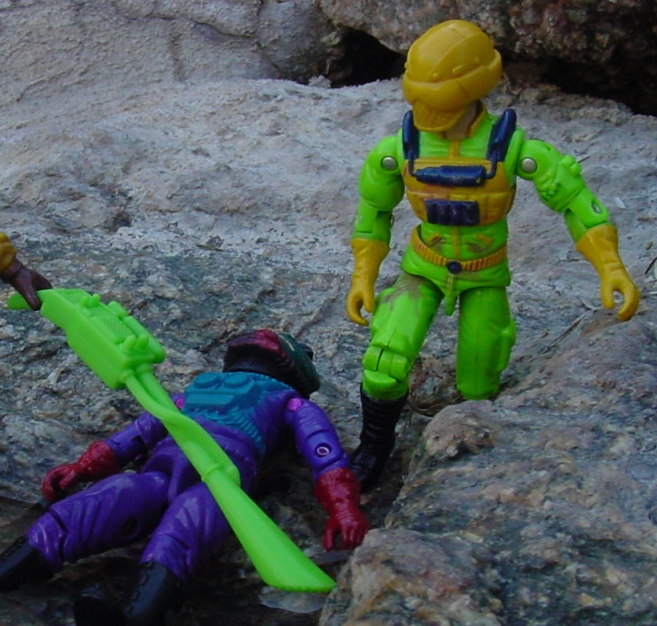 Posted by Robot_Sonic at 2:30 AM
Email ThisBlogThis!Share to TwitterShare to FacebookShare to Pinterest
Labels: 1991, Eco Warriors, Flint