There was a lot to love about G.I. Joe's return to retail in 1997.  Back were many collector favorite, classic molds.  Most of them included their original accessories.  But, there was also a lot to hate about the line's return.  While there were some good molds, many of the most iconic character versions were missing.  This created mismatches with the artwork that made you realize what couldn't be done.  Along with that, the construction and plastic quality was greatly degraded over the materials used for the Joe line in 1994 and the ancillary lines like Street Fighter and Mortal Combat movie lines in 1995.  An upside, though, was that the paint masks were more like the vintage figures than the dual colored figures that dominated 1994.  The overall result of the wave was mixed.  There were some great figures, some good figures, some OK figures and, some really bad figures.  The retake on the Baroness character, though, definitely falls into the good figures, and maybe even the great figure category.  She featured the return of the classic 1984 mold, but in an updated color scheme that was both new but also retro enough to fit in with the Cobra motif established in the vintage years.

In 1997, there were only a couple of really expensive G.I. Joe figures.  The 1984 Hooded Cobra Commander was one as people believed he was rare since he was only a mail away.  Version 1 Stormshadow was another as he's just awesome.  The rest, though, were all female figures.  The conventional wisdom of the time was that females were produced in much lower quantities and were rather rare.  As such, you'd often see Baroness figures offered at $50 at toy shows.  (All the while, bagged Stardusters and Steel Brigades would sit unsold for $5.)  So, when given a chance to reproduce molds for collectors, Hasbro sagely chose to remake Scarlett, Lady Jaye and the Baroness all in the same assortment.  Each was uniquely different from her original release, but included the full mold and accessories that offered a cheaper alternative for the frugal minded collector.

One of my laments about the repaint era was that, if you had to only repaint figures, at least make them both different from the original, but still decent.  In 1997 and 1998, Hasbro followed this mantra fairly well.  This Baroness is a perfect example.  She is different from her all black original figure, this time decked out in deep blue.  But, the color is both true to the character and aesthetically pleasing.  In short, she is just about the perfect approach to a figure repaint.  No one who had the original Baroness would feel this figure treaded upon her iconic look.  But, no one who only had this figure would feel that their only version was inferior.  They are both excellent looks for the character.  (It could be said that the 2002 Crimson version also fits these criteria.)

The 1997 figure includes several paint masks that were not available on the vintage version.   The Cobra logo is set against a circular background to help offset it from the opaque blue base.  The Baroness actually has silver buckles and accouterments while sporting additional red detailing.  Her legs retain the black boots.  But, they are set against the dark blue pants.  The overall color scheme showcases in the mold in ways the vintage figure never did.  The blue is a good mesh for Cobra Commander figures and the black matches the V1 Destro figure.  So, depending upon whom your Baroness is aligned with: you now have choices to showcase her allegiance.

For years, I ignored this figure.  I had her in a drawer.  But, I had the original version and that was good enough for me.  When it came time to cull my collection, though, this figure caught my eye.  She was a great repaint of a classic mold.  But, unlike many of the 2000's era repaints, she offered something different enough from the original that she was worth keeping around.  As such, this Baroness survived my reduction and has remained since.  This figure fits in with most any Cobra display, be it classic or modern re-do.  You can see this mold as a vintage release, while also taking advantage of the modern upgrades in paint masking.  In short, it's a figure that is good enough to justify having two versions of it in your collection: even if you are a minimalist collector.

The Baroness mold got a lot of use.  It saw only one release in the vintage, Hasbro line.  But, the mold then went to India.  Funskool released a Baroness figure that was nearly identical to the American version.  But, they also released a red version of the figure in their Complan Commandos line under the name of Rednok.  It's a very rare figure, but not interesting outside of the rarity.  Hasbro got the mold back in 1997 for this release.  She then appeared in black and red as the Chameleon character in 2000, in both Crimson and Fuchsia in 2002 Convention sets, with a new head in the 2004 Comic Pack #1 and with the new head again as a member of the Imperial Processional set in 2005.  While you could argue that there are Baroness repaints to be still explored, there are plenty of versions out there (most of them high quality) for collectors to track down.  So, the mold certainly got its due.

In the early 2000's, the 1997 figures reached insane pricing heights.  There was a time when this was a $20 figure...if you could find her.  Now, that's not the case.  Loose, mint and complete with filecard figures can be had for around $7.  You can get a carded three pack of Baroness, Destro and Cobra Commander for between $20 and $25. It's a sharp fall for items that were, at one time, stupidly expensive.  But, there are lots of Baroness figures available now that were not around in 2002 and 2003.  Plus, the collector fascination with the character has somewhat sated and the Baroness in general is less desirable than she once was.  This Baroness has some issues with skin color and overall quality.  But, the general color scheme and vintage head make it a must have version of the character.  For what she'll cost you these days, she's a steal. 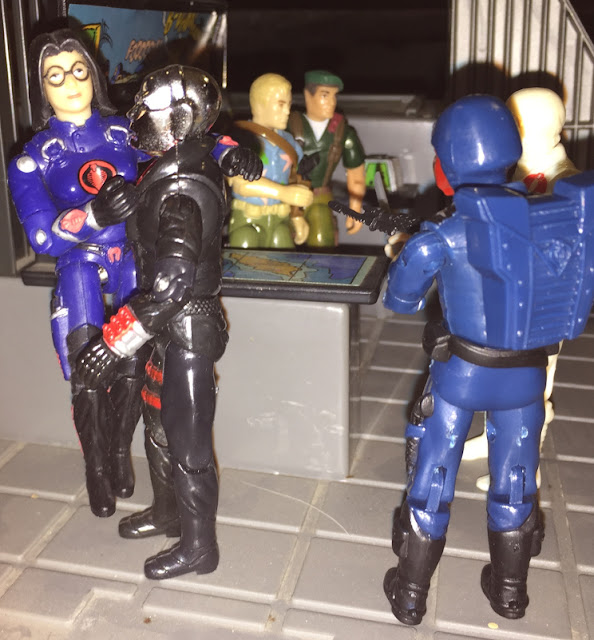 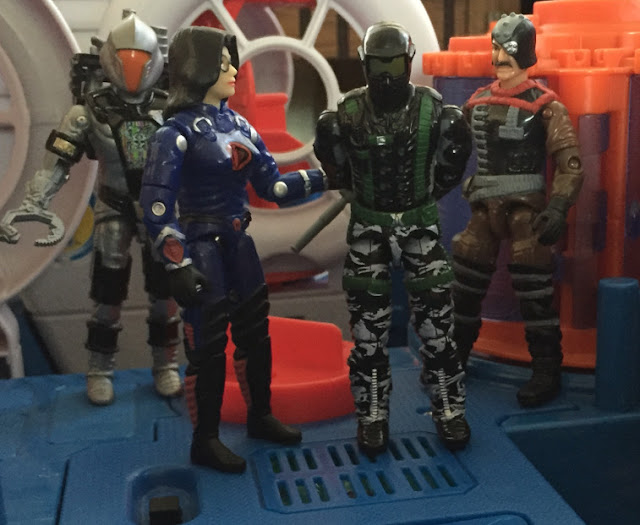 Posted by Robot_Sonic at 2:00 AM
Email ThisBlogThis!Share to TwitterShare to FacebookShare to Pinterest
Labels: 1997, Baroness, Retailer Exclusive