It has been 16 years since I last looked at the Blaster character and figure.  To put that into perspective, the 1987 Blaster figure was only 13 years old when I profiled him.  This Funskool figure is more than 15 years old now.  The reality of the situation, though, is that Blaster hasn't changed much in that decade and half.  The figure has yet to retain any of the prominence he gained as my childhood Joe years came to a close.  The one change was the acquisition of this Funskool Blaster.  And, while it was a way to revisit the character, I've found this figure to be more interesting in other roles in my collection.

As a character, Blaster was incredibly important to me during the final months of my childhood Joe run.  Acquired in December of 1987, Blaster was introduced as a General and was one of the old guard who guided the Joes in their final, epic battles with Cobra.  He had been a science officer in his younger days, which explained his powerful energy weapon.  For the few months where Blaster was an integral character, he made his presence felt.  But, as I packed my childhood collection away, with it went Blaster's place of prominence.  When I unpacked the toys as a collector in the '90's, the newness that drove Blaster's popularity had worn off.  Instead, there was a dark green figure, missing his trademark mask that wore garters on the outside of his uniform.  He wasn't terrible.  But, Blaster's reign as a major character was done.

Which brings us to this Funskool release.  For the first couple of years that Funskool figures were heavily imported, I had little in the way of resources to purchase them.  So, I focused mostly on the army builders, major characters and the new figure that came out every quarter or so.  In the mid 2000's, though, I realized that the Funskool supply was starting to dry up and I went on a quest to fill the remaining holes in my collection.  This brought me some bad figures like Dodger, some boring figures like Psyche Out and some oddly fun figures like Blaster.

At his core, the Funskool Blaster is heavily based on the American coloring of the figure.  The base is green, though it is brighter, and the general feel of the figure isn't that much different from the American version.  Where the Funskool version excels, though, is in the accessory department.  Along with the mask and standard energy weapon, the Funskool Blaster included some additional gear that make all the difference for the figure.  Aside from the appreciated battle stand, Blaster also includes the massive machine gun that was only available in the U.S. with the very hard to find 1992 Recalled Roadblock figure.  (This weapon is a mainstay of Funskool releases, though, and is found with the Funskool Roadblock and Red Dog figures as well.)  The figure also includes a grey version of Lifeline's backpack.  When put together, the Funskool Blaster is very reminiscent of a generic Sci Fi, futuristic soldier.  The mask cloaks his identity in a way that allows for the figure to be used as an army builder.  He is a great element to battle against the Mega Marine Cobras and the Monstro and Bio Vipers or even as a foil to the Blackstars or Lunartix from Star Brigade.  Yes, he's a bit outside of the traditional Joe norms.  But, this Blaster offers something fun to a collection and a way to expand upon some of the later, more marginalized Joe themes.

This is the fate of my figure.  I don't really have a use for the Blaster character.  And, the American figure works for Blaster in my collection.  As a diorama filler, though, this Funskool version works out well.  His gear is in scale with the figure and fits his overall design.  While I'm not a huge sci fi guy in terms of my overall collection.  I do like astronauts and can see this Blaster fitting in as a crewman on the Defiant or Crusader.  But, he would be a nameless one who would likely perish during the invasion by aliens or Astro Vipers. It's not much of a role, but works for the figure.  I guess I like the idea of owning a Funskool Blaster more than the practicality.

The Blaster mold found a lot of use around the world.  In the U.S., he was released on the TRU Exclusive single cards and then on the 2 figure blister packs.  Once these releases were done, though, Blaster, along with most of the rest of Battle Force 2000, next appeared in Brazil.  There, Blaster was released as Atomizer.  This version is based on the American figure and is in a slightly different green color.  He features a silver version of the Tele Viper's gun.  Though, there is much anecdotal evidence to point to him also including a version of the American figure's weapon.  From there, Blaster, Blocker and Dodger all made their way to India.  Funskool started producing Blaster around 2000 or 2001.

He continued through the Funskool years and was a rather ubiquitous figure with his parts appearing on some of the Funskool mold changes such as being used for Flint's arms.  Hasbro, though, never re-acquired the mold.  Blaster was among the few figures that Funskool brought back around 2009 or 2010.  This version was packaged with an explosion background instead of the digitized explosion and features a different main gun than the older figure.  It is likely there are small color differences between the production times as well.  Around 2002, Funskool also produced a Blaster figure that was only available as a vehicle pack in.  This incredibly hard to find variant uses dark green plastic as the base with orange paint splashes.  He also features a sliver helmet.  (Basically, it's the same color scheme as the Funskool General Hawk and may have been a result of a color test for that plastic and paint combination.)  There are not many of these figures out there, but it is something for the Blaster fan to track down.

Today, Funskool Blasters are cheap.  He was heavily imported in the early 2000's and was not among the more popular figures of the day.  Now, you can acquire carded versions for between $5 and $15 depending on whether you want to wait or not.  Loose, mint and completes are listed all the time for around $7.  They sell because there aren't a lot of them sold at open auction.  Those that are, though, often sell for under $4 each and will go in lots for even less.  The figure is not popular and is priced accordingly.  As a necessary figure for completion, this price is worth it.  But, even as just an oddity, it's worth picking up a figure.  (Be sure to get one with the mask.  There are some that do not include it, so always check before buying a carded figure.)  The Recalled Roadblock machine gun is always a great addition to a collection.  But, the complete ensemble of Blaster's gear works for the mold.  When you can get something like that cheap, even if it's not something you'll really enjoy, it's still worth it.  You might just find a hidden gem. 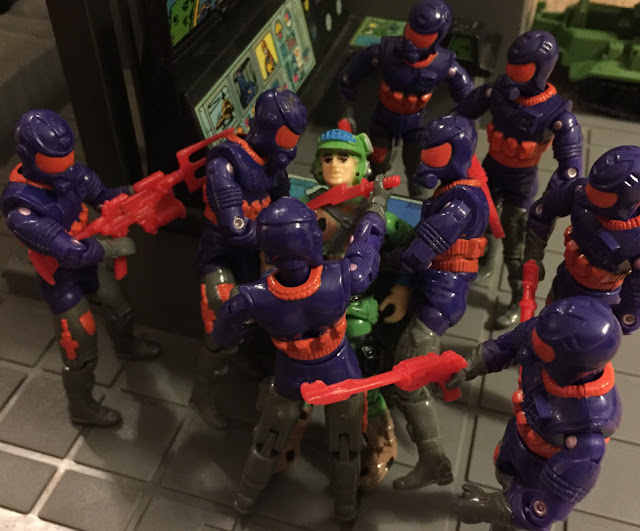 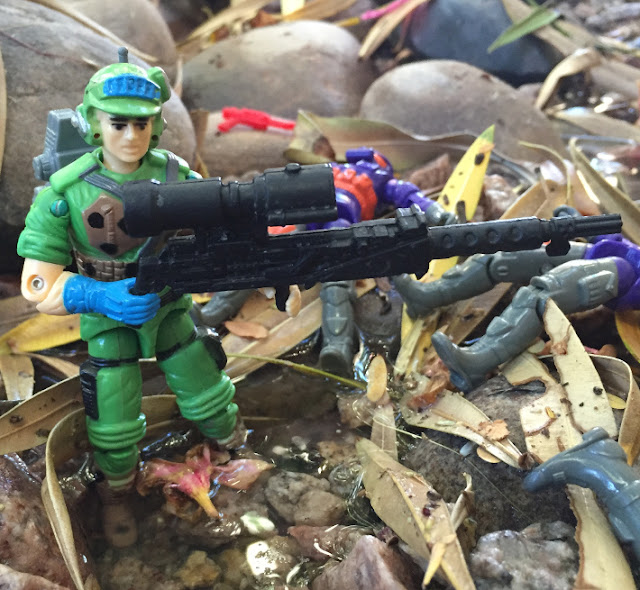 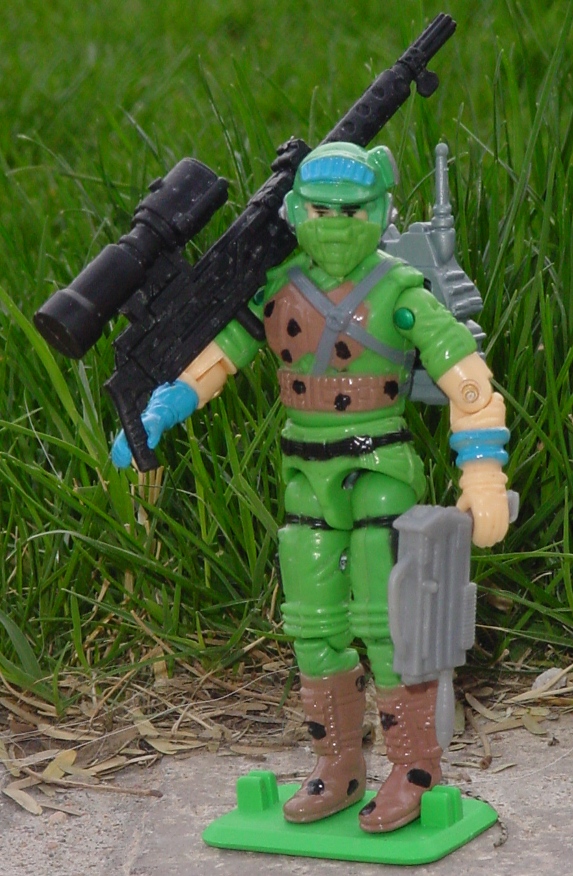 Posted by Robot_Sonic at 2:30 AM
Email ThisBlogThis!Share to TwitterShare to FacebookShare to Pinterest
Labels: Battle Force 2000, Blaster, Foreign Figures, Funskool