While there has recently been much discussion about the '97 Joes and their scarcity, few people have commented upon the '98 offerings. Sure, you can still find Oktober Guard and even an occasional Navy Seal team at most Toys R Us stores around the country. However, the 2 Cobra sets, the Cobra Infantry Team and the Cobra Polar Team, have almost completely disappeared from retail shelves and have been gone for well over a year. (I will tell you, though, that TRU does have huge warehouses full of toys that they periodically clean out. People have, as recently as last week, found both Viper and Polar packs at retail. It always pays to check.) While collectors fawn over the Infantry Teams, the Polar Teams have become the bastard step children of the TRU exclusive line. While the set is a bit bland, they are Arctic troops and really wouldn't want flashy colors on their uniforms. Of these three neglected figures, I have chosen the Firefly as my featured profile.

While I have already profiled one Firefly figure, I didn't really touch upon the character as he was intended. The return of the classic 1984 mold showed that, perhaps, Hasbro was trying to forget about the fiasco that was the Joe line in '93 and '94 and was instead focusing on the positive turn the line would have taken had it not been cancelled. By bringing back one of the most popular molds of the entire line, Hasbro helped to solidify itself with the collecting community and created a better position for the return of Joe to retail this past year. They also helped ensure that the '98 line would be an even greater success than the '97's had been. While I will be quick to criticize Hasbro for many of its decisions, especially regarding its Star Wars line, I have found that the new Joe releases are well thought out with great deference to both the collecting community as well as the children's market. While the '98's were most assuredly aimed at collectors, it was the inclusion of great molds, awesome accessories, and realistic colors that helped attract a new generation of fans to the Joe brand. While it burns collectors up that they aren't featured in long term strategy meetings at the major toy companies, I think that the new, leaner Hasbro should be able to keep collectors happy for several more years all the while attracting a new base of Joe followers. They just need to make sure that they don't do repaint after repaint, or even over produce the same characters in different outfits.

All that being said, this mold of Firefly has always been among my favorites. Back in '84, Firefly was the first new figure I acquired. He became the ultimate villain. No matter how many times I lost his accessories or broke him, I always found a way and a place for Firefly to be a real nuisance to the Joes. Now, that '84 figure still occupies a role very similar. I have never really seen Firefly as a leader of troops. (Despite what you see in the scene down below.) Instead, he has been a loner. I've always used the named Joes as more loner soldiers. Firefly was one of the few Cobras who were used in that capacity as well. I always felt that Firefly's filecard hinted at a personality that would be truly terrifying and nearly impossible to stop. Unfortunately, the ninja garbage got in the way of his characterization in the comic. In my world, though, Firefly remained a non-ninja, unstoppable force.

Of course, I rarely use this version of the mold as the actual Firefly character. In scenarios like you see below, I use the Arctic uniform as a necessity. Most of the time, though, Firefly is the '84. The '98 is traditionally used as an Arctic commando or even a S.W.A.T. trooper. Yes. I use the '98 Firefly as a good guy. He lacks Cobra sigils and I think his uniform lends itself to a highly trained and specialized commando unit. Yes. I also use the '00 Firefly in this same capacity. These guys lend themselves to this sort of thing. (Plus they were relatively easy for me to build armies.) They are the type of figure that has the versatility in both uniform and accessories to really allow for some deviance from his intended character. It also allows me to use both of these very cool figures in many more situations that just keeping them as Firefly. I think this is where the strength of the new releases lies. The figures they have produced so far really lend themselves to a variety of tasks. Giving children the opportunity to expand their play has always been a hallmark of the Joe line. As long as that continues, I think the new releases will remain a success.

Like the Cobra Infantry team, these guys were only shipped 1 pack per case with the '98 figures. Many collectors, though, didn't hoard these guys like the did the Viper packs. Few people use Firefly as an army builder and the Arctic Night Creeper wasn't all that cool. Add to that the fact that Arctic figures tend to be less popular, and you should have a set that is very easy to find on the second hand market. Alas, this isn't quite the case. Sure, carded Polar Teams are easily found, but loose '98's are a tough find, regardless of for whom you are looking. Most collectors bought just as many as they wanted. I know that I held off buying a couple extras of these packs because I didn't really want the extra two figures that came with it. If people did buy extras of these guys, they have kept them carded. That's why you can easily find carded Polar Teams, but loose figures are relatively tough finds. '98 Fireflies are also starting to get expensive. Sure, he won't set you back the $40 an '84 Firefly will cost you, but he does usually get between $10-$15. Considering that you can usually buy carded Cobra Polar Teams for about $20, I think this is the route to take. Like the aforementioned Cobra Trooper, though, I think this guy is a figure that you will lament not acquiring right now. The carded Polar Teams are not too expensive for you to buy one and open it. As those days could come, I would say to act now. This is a figure for whom I have found many uses. I think you will as well.

Fireflies, I've got. I would, though, be interested in '98 Snow Serpents. If you have some of those you want to trade, let me know. 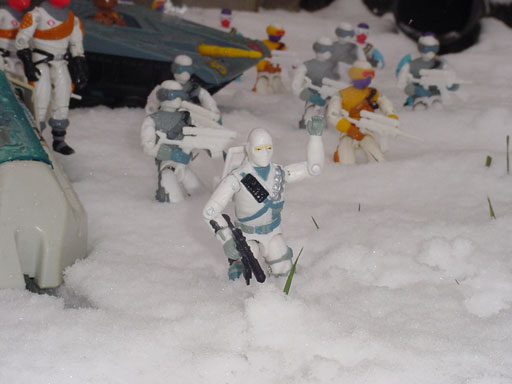 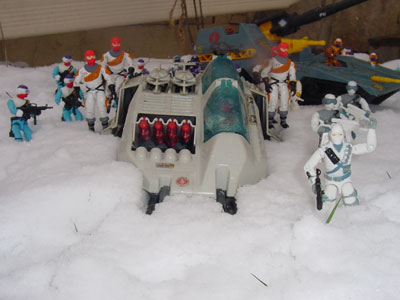 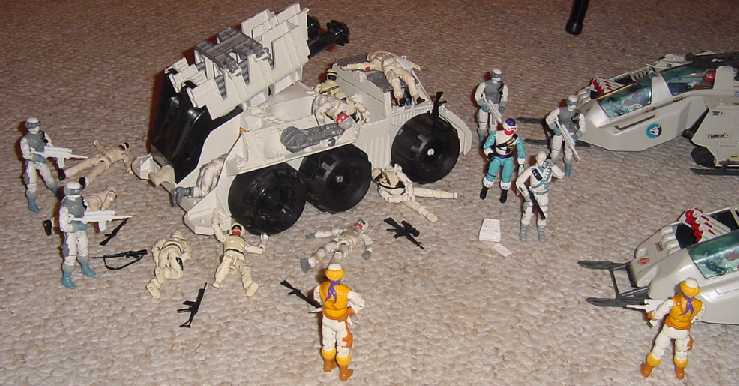