Much has recently been made of this figure. Most of that hullabaloo, though, centers around the '01 rerelease that comes with the new A.W.E. Striker. While I have yet to acquire that figure (stupid toy moratorium!) I point you to General Hawk's Page and, specifically, his profiles section. There he has a very nice write up on the new version of Pathfinder as well as his new vehicle. While the good General laments the lack of accessories on the new figure, I decided that those would make an excellent subject for a profile of my own. Couple that with the fact that I just recently acquired a new Pathfinder in a large lot of figures, and you can see why I might choose this guy to help shift the balance from Cobra in this section of profiles.

1990 was the year of accessories. Most of the figures (Bullhorn, Salvo and Big Ben) came with tons of great accessories that often overshadowed the figure itself. Such is the case with Pathfinder. Most people know about his accessories but care little for the figure. In fact, were the mold not such a ringer for one of the members of Snake Eyes' and Stalker's LRRP, I don't think you would ever see him. It is for this reason that Pathfinder definitely fits into the forgotten mold. He is just another of the bland, over-accessorized carbon copy Joes that came out in the early '90's. Because of that, though, he is also a figure that can draw attention to himself when he appears in fan fictions and dioramas. People don't really remember him and can be drawn by his presence.

While I do find Pathfinder kind of cool, I really don't have all that many uses for him. His machine guns, while kind of neat in design, aren't really that much fun to play with. His buzzsaw is the same. It just really isn't a fun accessory. In some instances, like the photo below, Pathfinder works very well. Most of the time, though, I have no use for him. In fact, until this most recent acquisition, my other Pathfinder figures had not seen the light of day since the day I first acquired them and put them away into their drawer. He's one of those figures who looks pretty cool when he is on display, but really isn't that much fun to actually have. I found myself really wanting Pathfinder, Rampart, Ambush, Stretcher, and Topside back when I first returned to Joe collecting. Now, though, I can't remember the last time I used any of these figures. The abundance of accessories make the figures appear cool, but they take away from what the figure itself has to offer. I've said before that sometimes an accessory does a figure make. In this case, though, the opposite is true. A huge amount of accessories take away from what is really a nice figure. Had this guy come with a hand held gun and a traditional Joe pack, he might have found himself very comfortable in many collections. Instead, you rarely hear about him.

While Hasbro has access to the Pathfinder mold, they haven't really used the most of it. There was a decent repaint in 2001, but that was all we saw of the figure. The exact same figure as the '01, only this time with a full complement of black accessories, was released a member of the 2004 VAMP exclusive set. Other than that, Pathfinder's chest was used with great effect on the 2007 Convention Clutch figure. However, beyond that, the mold really hasn't been utilized. I feel that, properly colored, a Pathfinder repaint could be the type of inspired figure that collectors would enjoy. But, if that never happens, at least there is one other version of the figure to give the character some depth.

Pathfinders, like most of the 1990 figures, are kind of tough to find. Especially if you want him mint and complete. He is, though, very cheap. A complete one will probably run you under $7. You really can't beat that. It took me, though, about a year to get one. Since then, I've only acquired 2 others. When you consider that I focus on lots containing '89-'92 figures, you start to realize that there aren't too many Pathfinders out there. Perhaps that is why we saw him as the driver of the new AWE Striker. People would have forgotten about him and not seen the reissue as Hasbro just pawning off popular molds on all too eager collectors. He is a figure that has its place in a collection. For me, that place is tucked away with most of my other obscure and seldom used Joes. Perhaps, though, that will change. One of the great things about profiling figures is that often times I rediscover them as well. Maybe this will be the case with Pathfinder.

What do you think of this figure? I've found many of the 1990 figures to be forgotten by just about everyone. Who is your favorite? Email me. 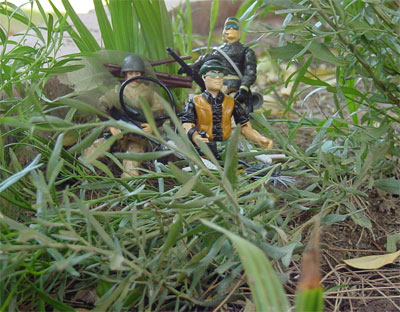 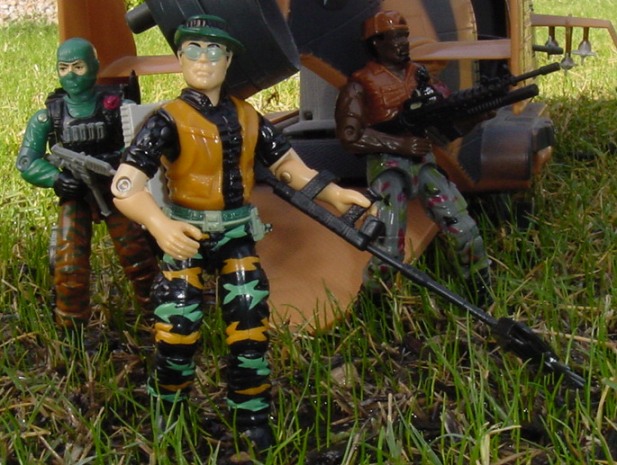 Posted by Robot_Sonic at 1:23 PM
Email ThisBlogThis!Share to TwitterShare to FacebookShare to Pinterest
Labels: 1990, Pathfinder