All right. I will give that this guy looks life a refugee from the Village People. He is also the butt of just about as many bad jokes and puns as Skidmark. However, the 1985 Shipwreck is, for many people, one of the key figures to considering their collections complete. While I profiled the figure from 1994, I did nothing to touch upon the Shipwreck character. He was certainly one of the Joes whose personality carried him above the mundane background figures like Barbecue, Airtight and Alpine and made him a fan favorite.

Shipwreck is one of the few characters I distinctly remember from the cartoon. He, like Flint and Lady Jaye, was introduced by the cartoon a year early. Naturally, it built up high expectations for the figure. The only way it disappointed me, or any of my friends, though, was that Hasbro did not release the cool boat contraption that Shipwreck used in the cartoon. (In retrospect, the vehicle was pretty hokey, but would have been cool when I was a kid.) The figure itself is very nice. He has a basic, blue uniform with the cutesy little sailor hat. What made shipwreck cool, though, was his accessories. His gun, while a bit retro, was very cool. Polly, his parrot, was a gimmick that seems to have captured the attention of even many modern collectors today. His best accessory, though, was the rope. As he showcased in the comic, this rope was not just for functions, it was for combat. (While the panel of Shipwreck breaking the Lamprey's helmet with the small anchors was very cool, it didn't translate all that well into the scene below. Oh, well. Hopefully, you can still get the basic idea.) It was the rope that kept Shipwreck in my collection for many years. Alas, though, it was the loss of this accessory that ended Shipwreck's run of popularity. Only with a recent acquisition of the specimen you see below (Thanks, Sam!), has Shipwreck began his return to prominence.

Back in the '80's, a Sears catalog showed the U.S.S. Flagg with several Shipwreck figures manning different stations. This has become a great past time for many people. Simple headswaps allow this basic figure to see wide reuse as the crew for Joe naval stations. As such, people tend to hoard Shipwreck figures. I've got 4 or them and find that number being among the smallest when I talk to other Joe collectors. This is the type of figure, like the Action Sailor, that allows you to build armies and create faceless legions for the Joes. He also can work similar to a figure like Hardtop in that he can provide the valuable support staff who keeps Joe and their equipment in fighting shape. It was in this capacity that Shipwreck had fallen in my collection. The couple that I had were simply dockmen who moored the Shark 9000 or Hovercrafts and were quickly killed in any Cobra attack.

This was vastly different from the swashbuckling hero Shipwreck was in my youth. One of my oft enacted scenarios was similar to what you see below. Shipwreck used his rope to climb aboard a hydrofoil and take out the crew. (Of course, back in those days, I had only one Lamprey so it was other hapless Cobras who suffered Shipwreck's wrath.) He could then turn the Cobra craft back against it's allies in a surprise attack. Sure it was cliched. But back in 1985, things like that didn't bother me. The figure was fun and adventures like that kept me entertained for hours. Joe's most enduring trait has been its versatility. Over the years, as my adventures morphed and became vastly more complex, the Joe line offered everything that you would need for even the most bizarre undertaking. While the comics and cartoon offered some established story lines and character formations, it was the ability to put any given figure into any role that you desired that allowed for the long term run the Joe line enjoyed. None of my friends used the same figure in the same way. Sure, we all had Snake Eyes and Stormshadow be super ninjas, but we all had them with various limitations that would cause endless fights whenever my friends and I would attempt a Joe adventure.

Shipwrecks are pretty easy to find. He was a hugely popular figure that was available during the height of Joe's popularity. He is readily available on the second hand market despite the fact that many people own him in great multiples. Finding him complete with all his accessories, though, is a bit tougher. Both Polly and his gun tended to break. The rope was oft lost and easily knotted. Still, mint and complete, this guy still won't cost you more than $10. If you only want them for crewmen and don't care about the accessories, though, you can get this guy for next to nothing. As I move towards display of figures, I think I'll like having a couple of these guys. Should I ever acquire a U.S.S. Flagg, I'm sure that Shipwreck could start to rival even my most ubiquitous Cobras in sheer numbers. For that reason, I casually add these guys to my collection. It is easy to do since he is out there in such great numbers. It is nice, for once, to be able to showcase an army builder where there is no sense of urgency in his acquisition. Still, though, should Joes popularity skyrocket, figures like this could start to dry up. Should that happen, there will be many collectors, myself included, who will stew over lost opportunity.

Shipwreck's are cool and lend themselves to army building. Still, though, I'm only really after one of the Brazilian Tiger Force Shipwrecks. If you have one of those with which you are willing to part, email me. 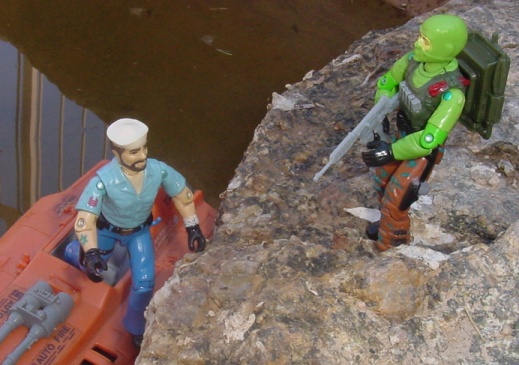 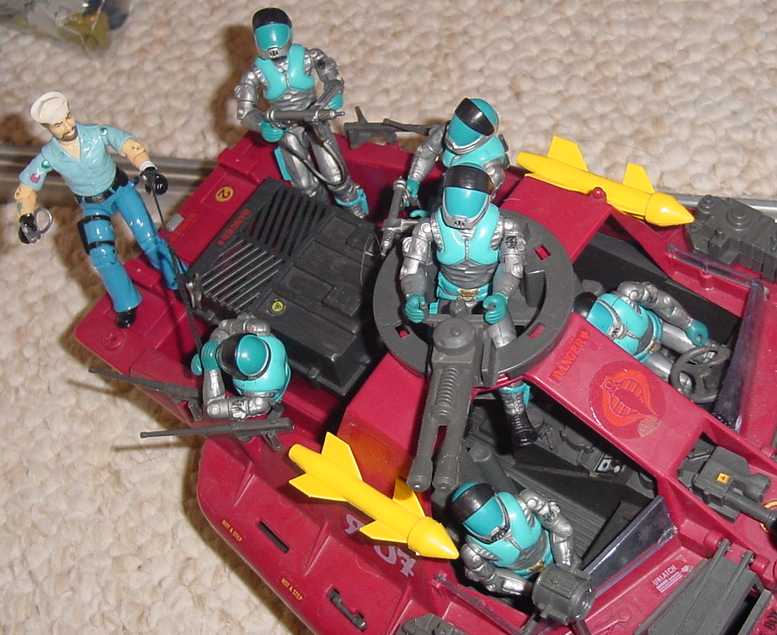 Posted by Robot_Sonic at 4:19 PM
Email ThisBlogThis!Share to TwitterShare to FacebookShare to Pinterest
Labels: 1985, Shipwreck