Back around Christmas time of 1987, I went to a Toys R Us. The previous year I had found several new 1987 series figures who had been released early at around the same time. This time, I was lucky, again. The store was fully stocked with a new subset of the G.I. Joe team: Battle Force 2000. There were six figures in the set and all of them, except for Avalanche, looked really nice. I purchased Blaster and Knockdown for myself and considered this a successful toy run. As 1988 dawned, though, my interest in Joe severely waned. I only purchased 2 more Joe figures the following year. As such, many figures of exceptional quality never made it into my collection. As the years passed, I returned to Joe collecting. In those early days before the Internet was available as the collecting tool it is today, I would pick up a figure or two in odd places. (A friend might find one in an engineering lab, I'd take a day trip to Trader's World in Ohio to find old Atari 2600 games and end up with a couple of Joes, etc.) Back then, figures were really cheap and I was only interested in what I didn't have or thought was really cool. At one such random find, I picked up a nicely colored figure who I recognized from the comics. He was done in subtle grey and brown and had a helmet molded to his head. I figured he would make a decent addition to my collection and I purchased my first Blocker figure.

There are two distinct variations of Blocker. The first one you can see in the pictures below. The figure has a clear visor covering his eyes. Later versions of the figure did not include this visor. The visored version of the figure is much tougher to find. Personally, though, I've always found the unvisored version to be more versatile. I've often used this figure as a combat pilot in my Razorblade helicopter. I give him Lifeline's air mask to amplify the visual effect and have found him a figure that I could really use. As such, in those early days of my return to Joe in '95 and '96, Blocker got a lot of use. He piloted my favorite small aircraft and was involved in many memorable crashes. He became my primary combat pilot who was heavily utilized against my resurgent Night Raven Drone and AGP Cobra air armada.

Back in those days, my collection was pitifully small and most of what I had was rolled up in little baggies and stored in a shoebox buried in my closet so that my brothers couldn't find them and continue to lose and break what was left of my once large childhood collection. As such, figures who I did have available to me then, like Blocker, still hold a special place in my collection. I've said before that I think I got more enjoyment from my collection when it was much smaller. While that may be true in some respects, I do still find my collection to be an entertaining diversion and appreciate it as a whole. However, one of the reasons I started the Forgotten Figures archive was as a way for me to remember individual parts of sum total.

As my collection grew, Blocker's found his role changing. The 92 Ace gave me the combat pilot I had always wanted and left Blocker without a job. I soon found him, though, as a tank crew member or gunner. The look that I had originally associated with flight was now more suited to being a member of an armor team. He was perfect as a turret gunner or second man in my Mauler. He was a figure that looked good, but didn't fit the infantry role that the figures I had previously used in the armor capacity could. He has the bulky sculpt of a tank operator and looks like someone who would be on the front lines, but not without some sort of armor around him. As such, he currently occupies the role of a gunner or secondary operator in a large piece of equipment. It isn't a glamorous role, but it is one that needs to be filled by one of the Joe lines filler characters. In that capacity, Blocker excels.

If you like the Blocker mold I've got some great news for you. There is a Blocker figure that is currently available from Funskool. You can get them all over the place for about $4.00. The figure's basic color is a little darker than the American version and the color patches are a little brighter. If you are a fan of the American version of the figure, you are still in luck. The unvisored version of Blocker is very easy, and very cheap, to find. You can get them in lots, or by themselves for not much money at all. If you are looking for the visored version of this figure, though, you are in for a much tougher time. The visored version is one of the more difficult variations in the vintage Joe line to locate. The good news is that most people don't know anything about the variation and collectors as a whole don't tend to care. This means, if you can find a visored figure, he still won't cost you a lot of money. Blocker is really just another mundane, under appreciated Joe figure who really is worth some attention. He has some great potential that can be utilized in a variety of ways. Again, these are the qualities I look for in a figure. As such, Blocker is a guy who I enjoy having in my collection. If you are willing to give him a chance, I think he will find a nice home in yours as well.

While the concept of Battle Force 2000 doesn't really inspire me, I felt that several of the figures were excellently done. What are your thoughts? Email me. 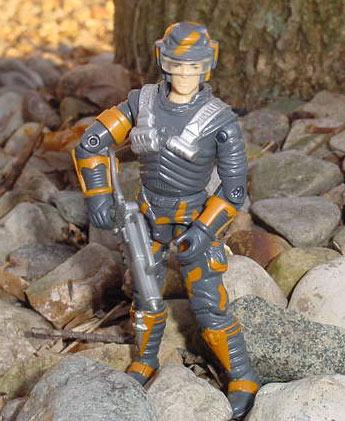 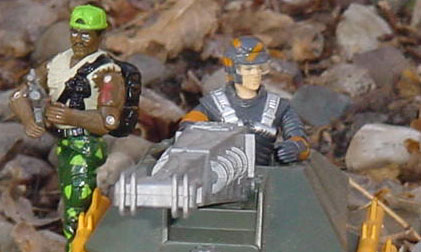 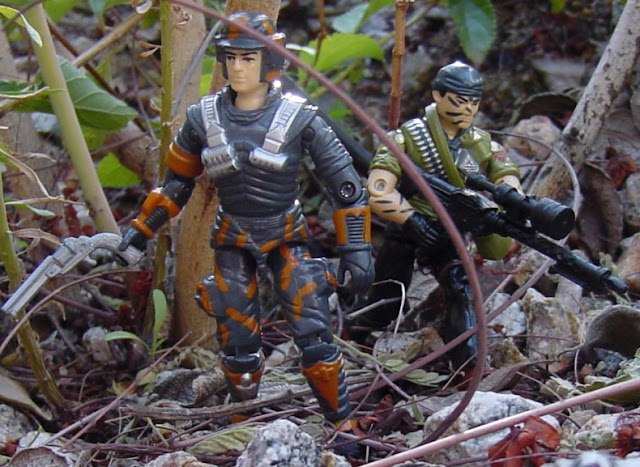