As most of you know, my current collecting focus in on figures that were never released in the United States. It has been my focus for nearly a year, now, and I have experienced some modest success in growing my collection in this direction. Most of you are familiar with my other profiles of Brazilian exclusive figures and know that I have found them an excellent addendum to any Joe collection. Well, that trend has continued. While this figure does not posses the true originality of those earlier figures, he is slightly different from his American counterpart. As such, Urzor plays an important role in my collection.

Urzor is a straight repaint of the American figure Repeater. He is done in a slightly brighter green base color and has a brown hat. The most distinguishing feature on the figure, though, is his mustache. As if from a bad Star Trek episode, this mustached Repeater is not a Joe, but a new Cobra figure. He was included in a four figure subset with Kangor, Leontor, and Tigor. Kangor is a straight Big Boa repaint who has a black head. For some reason, he is the most scarce of the Forca Fera figures. He is kind of unspectacular, but his card art is almost worth having. On it, it appears that Kangor is boxing a Kangaroo! Perhaps the humour is just me, but seeing that card art always makes me chuckle. Leontor is the least desirable of the 4. He is nearly identical to the American Backblast figure. He has no real paint differences that are noticeable without very close scrutiny. Tigor is a tangerine colored amalgamation of Recoil's upper body and Scoop's legs. He has highlights in light, olive green and comes with a bluish-grey version of Recoil's gun. While he may not sound like much, the figure is pretty decent. He and Urzor are probably the most known figures in the bunch due to their differences from their American counterparts.

This brings me to the inevitable question, "what do you do with a Cobra aligned repaint of a classic American figure?". Well, I've got that angle covered. ;->

As some of you may have noticed in many of my dioramas throughout the site, I always have the Decimator figure positioned with my new, young Cobra hierarchy. Ever since I acquired him, this figure has been the highest ranking Cobra enlisted field trooper in the Cobra army. (Worms represents the highest ranking enlisted man in Cobra, but he no longer fights in the field.) This character has stood alongside the character portrayed by the Chinese Major Bludd as his most trusted field advisor. This character is the combat veteran that the character portrayed by the Flying Scorpion figure needed to have a real perspective on the realities of combat. However, this character has served his time. He has now been an enlisted man at the beck and call of the field generals for several years. Naturally, a promotion was in order. The Flying Scorpion character decided that this high ranking enlisted man needed to be a full field general in order for him to be able to command troops and officers who were not fully loyal to the Flying Scorpion's cause. However, in order to do this, he needed a new person who could assume the role of the highest ranking enlisted man. The current Sergeant Major (my rank for this person) then sought out a suitable replacement. As soon as this was done, the current Sergeant Major was promoted and became the named General called Urzor.

Urzor decided to buck the Cobra tradition of hiding his face. Of the men in the Flying Scorpion's cadre, only the character portrayed by the 1993 Firefly covers his face. (That is due to necessity as he is a fast attack commander and often rides in the front of uncovered, fast attack vehicles.) Urzor decided to follow the trend and allow his face to be seen for the first time in his Cobra career. As he is a veteran combat trooper, he shows some of his age and this head sculpt allows the story to flow right into this figure. With his new promotion, Urzor still works with the Chinese Major Bludd character, but he is a full field general and no longer simply relays orders from his superiors. With Urzor firmly in place, the Flying Scorpion character has another trusted associate who can carry out his plans without fear of being compromised by backstabbers in the more traditional Cobra hierarchy.

Urzor is a straight repaint of the American Repeater. The mold was used twice in the US before it was sent on to Brazil. In South American, Estrela released the mold twice: once as Retaguarda and then as Urzor. Retaguarda is a slight repaint of Repeater and is a fairly difficult figure to track down. Urzor is the more significant repaint that features the affiliation change and is much easier to find. After the use of the mold for Urzor, the Repeater tooling has not been seen again. As it was likely that Urzor was produced around 1993 or so, it is fairly safe to say that mold is lost in Brazil and will simply never be available for the modern repaint line.

Quality wise, Brazilian figures are just about on par with American releases. They are, though, more brittle. It is something you can feel when you handle one. The plastic squeaks when you first turn the joints and arm swivels can often be frozen. Broken thumbs are a common affliction of Estrela produced Joe toys and when you handle a figure, you can feel why. Very rarely do I put a gun in any Brazilian figure's hand. The purple version of Spearhead's gun that is included with Urzor is an accessory that I will have hang by its strap, but not one that I will put in his hand. I just fear breakage and look for accessories with smaller handles and smooth grips to use with my Brazilian Joes.

As Brazilian exclusive figures go, Urzor (along with the rest of the Forca Fera figures) are about the cheapest and easiest to acquire. Even MOC, you can get them for under $25. For whatever reason, they are out there in quantities that the collecting market has yet to truly absorb. You can often find these figures from American as well as Brazilian sources. As figures, I've found Urzor and Tigor to be worth their price. Both of them see use in my collection and continue to play important roles. I like figures that are unencumbered with almost 20 years of Joe "canon" behind them and are free to be developed in any way you wish. To that end, Urzor is a great figure. He has the look of a traditional soldier that Cobra is really lacking. Yet, he is still different enough to not be confused with the American figure with whom he shares a mold. If you are looking to expand your collection with Brazilian figures, I would recommend starting with the Forca Fera set. The figures are usable and even affordable. It's pretty hard to beat that combination!

As you can see, I have an Urzor. I also have a Tigor. Neither Kangor or Leontor interest me. However, if you have a Corrosao, Marujo, Marfim, Reptil Do Ar, Albatroz, or Asa Negra figure available, email me. 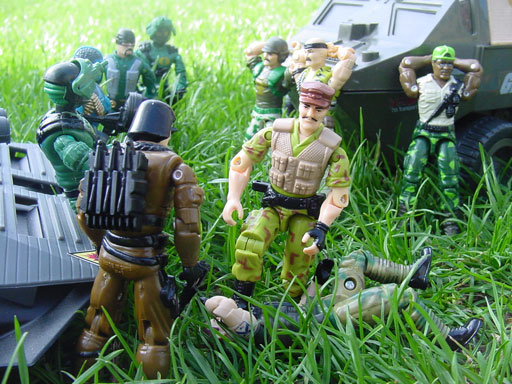 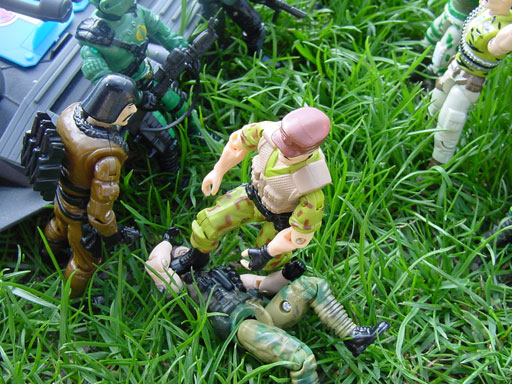 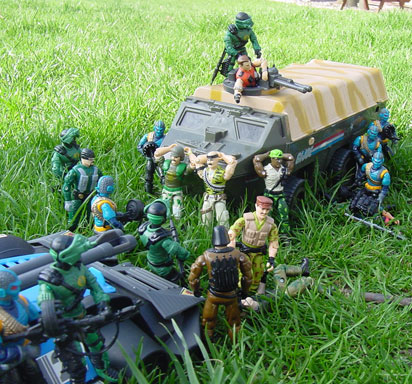 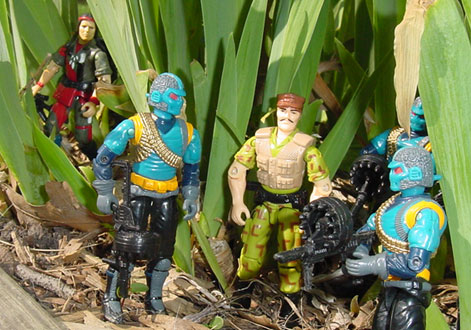 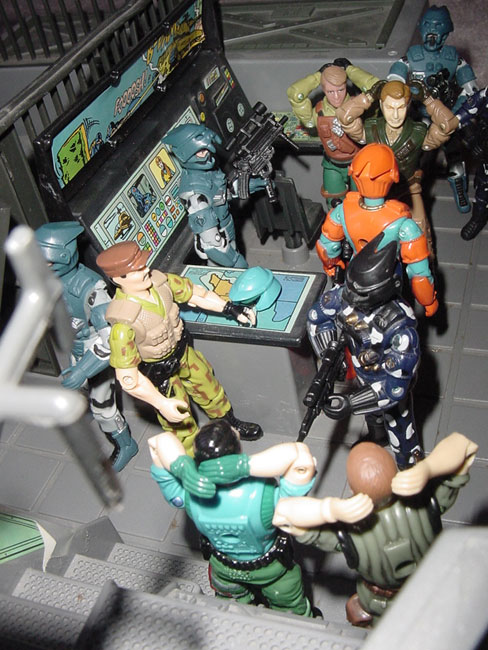 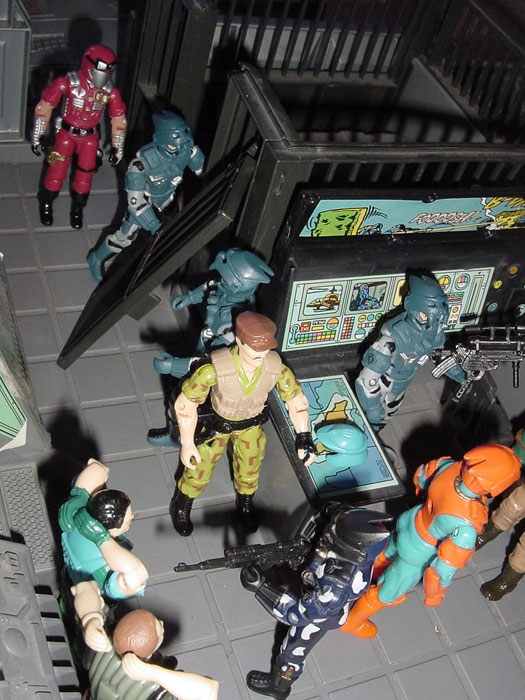 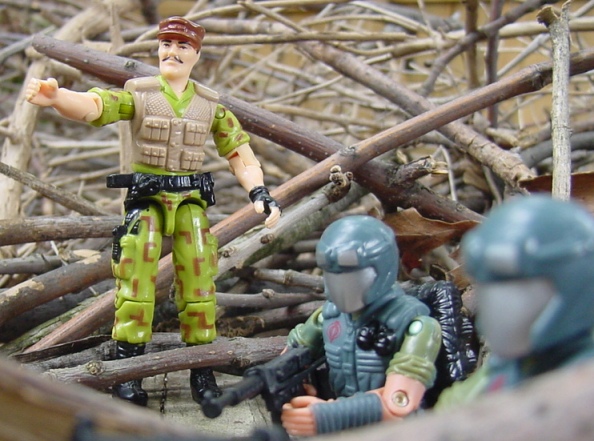 Posted by Robot_Sonic at 8:56 AM
Email ThisBlogThis!Share to TwitterShare to FacebookShare to Pinterest
Labels: Brazil, Foreign Figures, Repeater, Urzor