It's hard to believe that there have been G.I. Joe figures back on the shelves now for a year and a half. It seems like just the other day I went to the Indian Bend Toys R Us near Scottsdale, AZ and bought my first Cobra Commander/Chameleon 2 pack. In the past 18 or so months we have seen some remarkable things happen in the Joe world. I would suggest that almost all of it is very, very good. Really, what we are seeing now is what we had all hoped for back in '99 and early '00 when the return of Joe was nothing more than unsubstantiated whispers. While the return of Joe has been great so far and continues to be great, there are things we need to remember. There are lots of brand new Joe fans coming to the online community. In the past, we have been, shall we say, more than a little hostile towards many newbies who may not yet have brushed up on some basic social skills. One thing to remember in this time is that we were all newbies once. I shudder when I look at the posts I made to the newsgroup back in 1998. A little understanding goes a long way and often times, holding that scathing comment might prove much wiser for the long term health of the online fan community as a whole. With that aside, on with the profile. ;->

For as long as I can remember, Dial Tone has been one of my favorite Joes. It all started back in 1986 when a kid on the playground brought the newly found '86 Joes to school. He had gotten them at Target. Naturally, I convinced my mother to take me there. Of course, though, I arrived too late and there were no new Joes left. As we were walking out of the store, my little brother found a carded Dial Tone sitting on some random shelf. He snatched it up and my mother bought it for him. To me, this was devastating. I wanted that Dial Tone and watched in horror as my brother slowly destroyed him. As the year progressed, I bought all the other '86 Joes, but didn't acquire another Dial Tone. Finally, near the end of the summer, I broke down and bought the only remaining member of the '86 line who did not belong to me specifically.

This lead to a fascination with the Dial Tone figure. My Breaker figure had long since been lost by '86 and my Joes desperately needed a communications officer. Dial Tone fit his specialty perfectly. He came with a great gun and an awesome pack that had a pull down communication device. His colors were sharp and bright without being too unrealistic. He became a staple in my Joe collection as both a field communications officer as well as a companion to Mainframe in maintaining my Joe base communication systems. He was never the star of a mission, but went on all of them as his specialty was one that was imperative.

When I first returned to Joe collecting during my collegiate years, I had dreams of going to law school. As such, it was the law enforcement end of the Joe world that most interested me. You can see from many of my profiles that I use a variety of figures in security and law enforcement capacities and often buy them in multiples. For whatever reason, Dial Tone fell into this category. Somewhere, I had managed to pick up a couple of extra Dial Tone figures. They didn't have their packs so their use as communications troopers was limited. However, the berets just screamed a new specialty to me. As such, I made Dial Tone a generic security officer. He is the guy who is in charge of the Law minions and makes individual security decisions. With this specialty, I suddenly had a need for many, many Dial Tone figures. As was my M.O. at the time, I acquired them accordingly and Dial Tone was, at least until the '98 Cobra Infantry Teams were released, the single greatest quantity of any figure I had in my collection. In fact, one of the very first online G.I. Joe purchases I made was for a carded Dial Tone. He remains one of the best represented figures in my collection.

All this left me with one little void in my collection. With Dial Tone now a security officer, who was to be my primary military field communications officer? If you now fast forward to 1998 when the new Joe releases for that year were first being speculated about, there was a rumour circling that Toys R Us was going to offer a new repainted Joe headquarters with several figures as part of its Joe assortment that year. One of the figures rumoured to be included with this beast was Dial Tone. Naturally, this excited me and I eagerly anticipated seeing a new Dial Tone figure. Alas, the new HQ was not to be and my hopes of a new Dial Tone repaint disappeared. However, in the early part of 2000, there was news that Joes would be returning to retail shelves. Among the figures proffered forth as a possibility for the new releases was Dial Tone. A few months later, the first pictures of the new Dial Tone surfaced and he was in standard military colors. My dilemma had finally been solved and Joe finally had a definitive field communications officer. As such, I went kind of nuts on the Dial Tone figures and bought half a dozen of them for my collection. My Joe collecting energy had been pent up and I wanted to get as many of these cool new figures as I could.

There are many pros and cons about this figure. First off, his color scheme is great. Back when the Wave I's were released, the drab colors hadn't yet become so cliched and boring. On this Dial Tone, it was exciting; a true indication that Joe might indeed be back. However, the coloring had some drawbacks. Dial Tone's distinctive mustache was removed from this version. It's still on the mold, though, and makes the face appear a bit distorted. Secondly, the original Dial Tone had gloves that showed the skin on the back of his hands. The figure simply has bare flesh for his hands. Again, the original mold wasn't changed so the figure's hands had these raised patches on the back of them that make you wonder what sort of deformity this guy has developed. The figure did come with Dial Tone's original rifle recast in silver. I've always felt that this gun was among the best of the line and should have seen greater usage. To have it back, even in silver, was a great little treat. Unfortunately, that trend didn't continue as Dial Tone's signature accessory, his pack, did not find it's way to being released with this figure. It is a shame, for that was what really marked this figure as a communications trooper. Fortunately, the original Dial Tone's pack is available for decent prices and is something you can add to this figure for not too much money. Once you have that, the Dial Tone character probably has his greatest version in this 2000 repainted figure.

The 2000 Dial Tone isn't tough to find. He will, though, cost you a little more than you might like to spend. The reason is simple. While these guys were shipped in more than adequate quantities back in '00, people quickly picked up on the fact that the Tomahawk/Dial Tone and Firefly/Undertow packs were pulled from the Wave II cases. (Cobra Commander and Chameleon were as well, but they were such pegwarmers that no one cared!) As such, savvy, or unscrupulous, people bought out the remaining stock of these packs and held them. As such, now the only way to acquire one of these figures is though the highly marked up secondary market. Add to this the fact that Joe's popularity boomed in the months after these guys disappeared and you can see where the frenzy started. In all, though, the Wave I repainted Joes were quite common. They were available in most larger retail stores that carried toys and all of those stores got multiple shipments of them. If you are patient and a little creative, you can still get a carded Dial Tone/Tomahawk pack for about $10-$12. While this is about twice what they went for at retail, they haven't shipped in quite some time so you should expect a little markup. At any rate, at that price, the figure is very well done. I have found him to be a vital part of my collection and he remains my definitive field communications trooper. Despite some of the shortcomings of the figure, I think you will also find him a valuable addition to your collection as well.

While I'm pretty well set on Dial Tone's, I do need his Mission to Brazil version. Mine died a strange death when I was a child (that set got a lot of use!) and I need another one. If you have one available for trade, in fact, I'd even be interested in one with broken thumbs or a broken crotch, Email me. 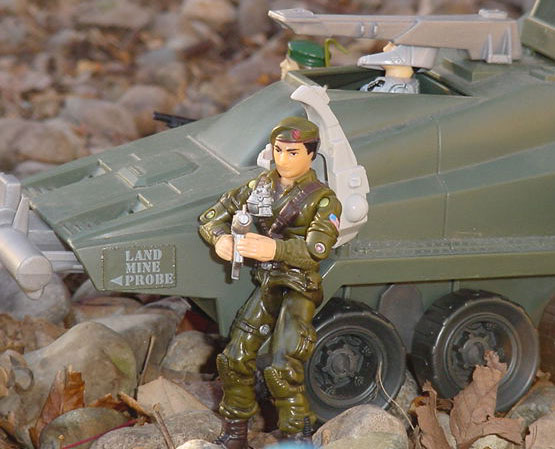 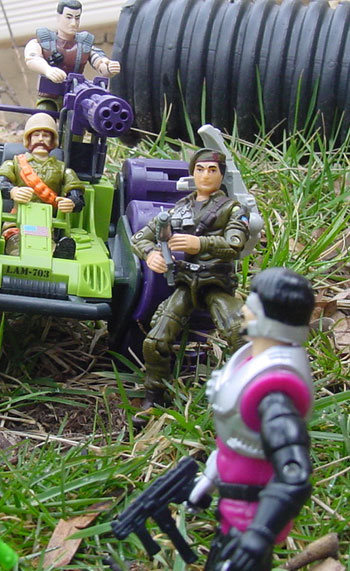 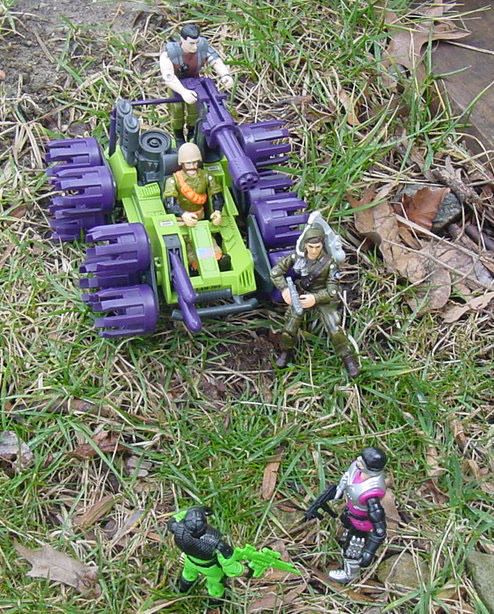 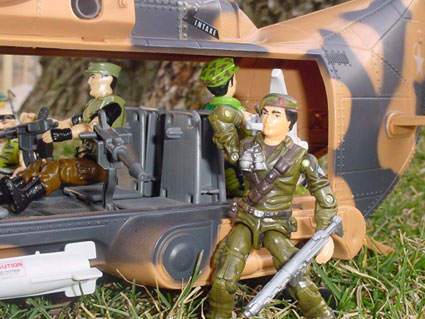