In the course of Joe collecting, you find there are a few sensitive subjects that tend to divide Joe fans. Many of them seem petty, but as important a part of life as Joe is to many people, you can see from where some of these passions arise. As I've matured as a collector, I've found that many things I don't like as an adult were immensely fun when I was a child. Among these is the character I've most recently chosen to profile. While he is not a big part of my collection today, when I was younger he was a figure who saw tremendous amounts of use. While many collectors no longer have any uses for this figure, the impact that Sgt. Slaughter had on the Joe line is more far reaching than that of anyone outside of the actual figure designers or Larry Hama.

I'll admit it. Back when I first heard of the Sgt. Slaughter mail in figure, I had no idea who Sgt. Slaughter was. Sure, I knew a little about pro wrestling. But my knowledge was limited to Hulk Hogan, Roddy Piper and the Junkyard Dog. As such, I had no idea about this character, or that he was even a real media personality until my friends filled me in on his background. As such, though, I didn't have the idea of Sgt. Slaughter as a wrestler driving my development of his character. I was free to create a character as unique as I wanted him to be.

In my adult collection, Sgt. Slaughter is as useless a figure as the Fridge, Big Boa and Raptor. He is simply a "gimmick" figure that I have no use for. I don't like the figure as a toy and I certainly don't like the Sarge as a character. There are a good number of adult collectors who are with me in these feelings. However, when you rewind to 1986, the Sarge was AWESOME! As a child, this guy was just what I wanted in a Joe figure. He was distinctive, cool, and well characterized in both the cartoon and in the comic. He was one figure that I wanted. In fact, I paid the $.99 and called the special 1-900 number on the mail in certificate to get the secret four digit code that allowed you to get the Sarge mail in figure with one less certificate. (I think the code was 1986!) I simply couldn't wait any longer to get another figure that had the certificate. I wanted my Sarge figure as soon as I could get him.

When I got my figure, I was not disappointed. While the mail in Slaughter had some shortcomings, he still became a top character in my collection. I used his baton like a boomerang and had it be so effective a weapon that he didn't need to carry a gun. I continued using him in this capacity until the summer. Right as school let out, G.I. Joe #51 was released. It introduced Sgt. Slaughter, only in the uniform that would be included with the Triple T tank later that year. This story hooked me on the Slaughter character even more! The minute I first saw the Triple T tank later that summer, I snatched it up just to get another version of this figure. With this acquisition, my original Slaughter figure was retired.

The Triple T version of Slaughter was much more combat ready than the mail in version. He still had the massive physique and signature head, but he was cast with camo pants and a black shirt. It make him look like a combat soldier instead of a drill instructor. As per the Sarge's initial comic appearance, I usually had my figure as the main gunner on the HAVOC. It was a position where he looked good. I gave him Rock and Roll's M-60 to also match the comic and my Sarge was set. He morphed from the brawler to a real soldier. He was the commander of the HAVOC and any crew that were with it while still being able to go out on foot to fight the legions of Vipers who were always riding around on STUNs. Of course, from time to time, he would still pull out his baton and go back to his old style, but I found a longer life for him as a soldier than anything else.

As with most of my figures, though, Slaughter's lustre faded. As I moved into 1987, the new figures were more compelling than the old stuff and I found that many of my '86 guys fell into disfavor. (It's a trend that continues to this day. The newest figures in my collection always see the most use.) As such, Sarge became just another guy in my figure box. Since then, I've never really considered him to be much more. As I moved into collecting circles, my apathy turned to dislike and I started to avoid any Slaughter figs. When I consolidated my childhood collection with my adult collection a couple of years ago, I just kept this Slaughter in the bag. He was such an afterthought that it never even occurred to me to pull him out. In fact, he was still in it that bag when I finally decided to use him for this profile.

The fact is, Sgt. Slaughter is a large part of Joe history. He was the first celebrity spokesperson for the line and was the media personality for many years. While it is easy to hate him, it is impossible to deny that he is an important part of Joe. As a figure, Sgt. Slaughter is no longer used in my collection. As a character, he has the same lot. However, for many people, he still remains an icon of Joe. He was a huge player in both the cartoon and the comic and he still has his fans. While many collectors still despise him and count him as the beginning of the downturn in quality for the line, many other collectors hold him in high regard and consider him a vital character to Joe mythos. Many arguments have developed over the inclusion of Sgt. Slaughter in the Joe line. Whether you like him or not, though, his impact is undeniable.

Sgt. Slaughter figures, any version, are pretty easy to find. As he is really a love-hate type of character (with more people probably on the hate side) there really isn't much demand for any of his figures. His little baton, that came with three of his four versions, though, can be problematic to find. Still, you can get him cheaply without too much trouble from a variety of sources. (You might also want to check out the Sgt. Slaughter figure from Argentina. It can be had MOC for a paltry sum and is a very nice version of this figure. It comes with his baton and has pretty good card art as well.) At any rate, the Sarge is never a guy that I've felt was necessary to an adult collection. However, pulling him out of his drawer really brought back some memories from a time when he was one of the most important characters in my Joe world. Will I start using him now? Probably not. The Sarge's days in my collection are past. Still, it's fun, every now and then, to reminisce about more innocent days. On that level, this figure is still pretty cool.

As my Sgt. Slaughter figures got some use, I could use mint, complete examples of his his first two versions. I'm also after the V1 and V3 filecards. If you have any of these available, email me. 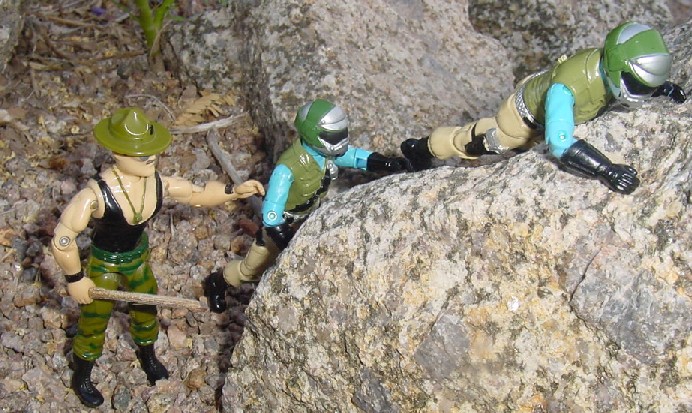 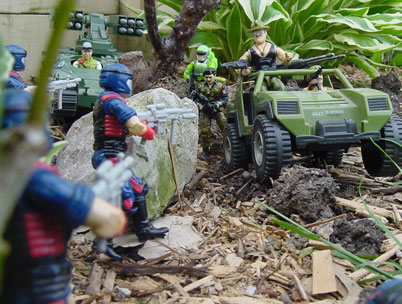 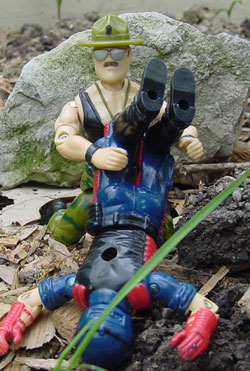