Back in 1984, Hasbro released one of the greatest vehicles in the entire Joe line, the Hovercraft. It was a novel toy and one that most people consider a necessity to any Joe collection. The driver of this vehicle was a Coast Guardsman named Cutter. The figure was realistic enough, but had a very bulky sculpt and didn't look quite "finished". As such, he was never a guy who really captured my attention on anything beyond the character level. However, here, the figure succeeded. As such, the original Cutter played a prominent role in my early collection. However, as figure sculpts improved in the coming years, guys like Cutter found themselves falling farther and farther down in my hierarchy. These nether regions would have been a permanent residence for this character except that new life was breathed into him when an updated version of Cutter was released with the D.E.F. in 1992.

I've always liked the D.E.F. I think that many collectors out there just lump any figure from any subset released after 1990 into the dreaded "neon" category. However, the D.E.F. does not fit this in any way. The figures released under its banner: Headhunter, Headman, Shockwave, Bulletprooof, Mutt and this Cutter are all well colored and excellently accessorized. As figures, they stand tall among those from any year. What was it, then, that doomed the D.E.F. to a future of obscurity? Simple. The figures came with "light and sound" spring loaded weapons. While some, like Mutt's net launcher, had potential and fun play features, most were nothing interesting and really detracted form the packaged figure's presentation. More importantly, the extra features raised the price point on these guys so they were more expensive than the regularly carded figures they sat next to. Let's see. Were I a parent in 1992, would I buy the regular Joe figure for 2.99 or the D.E.F. figure for 4.99? To me, they look the same. I'll just save my money and opt for the cheaper alternative. As such, these guys never got the real retail push they needed to capture the imaginations of many of the children who would have owned them and they remain a part of the hobby that has a stigma attached to them, even though it may not be deserved.

As far as the figure itself goes, this is really an prime example that Hasbro was still churning out high quality figure molds well into the 90's. Cutter is an excellent example of an update to a classic figure mold gone exactly right. One look at this guy and you know it's Cutter. They retained the normal look of his as well as his trademark baseball cap. They then re-did the life jacket into a more modern version that is less bulky and looks more in line with what a combat sailor would wear. They also retained his original color of orange and dark blue. It is a scheme that works great as the colors contrast each other to a degree that they accentuate the figure's mold while still maintaining that look or realism. He is well accessorized as well as he comes with a nice, small machine gun and a large, rescue flashlight that attaches to his leg. He also comes with a grappling hook, spring firing weapon. While not great, I've always liked figure that come with ropes and hooks. Removed from the launcher, it works quite well as a nice accessory for a sailor. As Hasbro is heading towards updates of classic characters with the Wave 2 resculpts, they would be wise to look to this Cutter as an example of how it should be done. This figure is an improvement in every way over the original figure, but still pays enough homage to its predecessor that any long time fan will instantly recognize him. If Wave 2 is pulled off in the same manner, then Joe fans in general have an awful lot to look forward to in the coming years!

I have dual uses for this figure. First off, he is Cutter in my collection. I have no use for the original figure now that this updated version is in my collection. When Cutter mans the Hovercraft, it is this version and this version alone who is called upon to represent the character. However, from time to time, I like to also use this guy as a maritime commando or a port defender. The look fits, with the large flashlight and small, compact gun. In this role, the figure gets more versatile and can really utilize the attention to detail paid his design. He is an army builder type figure who usually fights against pirates (portrayed by Dreadnoks) or a team of Cobra Divers who are trying to infiltrate a facility. Usually, this capacity is for more out-of-continuity adventures, but it shows that the mold has more potential than just being Cutter.

There is good news and bad news about the availability of the '92 Cutter. He really isn't all that easy to find, especially if you want him mint and complete. You just don't see him, or many of his D.E.F. brethren on a consistent basis in second hand market loose collections. The good news, though, is two fold. First off, if you do find a loose version of this figure, he won't cost you very much. Like the other D.E.F. Joes, Cutter is cheap. He can even be had MOC for prices that allow you to open him. The other bit of good news is that this mold is currently offered by Funskool. You can see a couple of them in the picture below. They are very similarly colored to the American version and are almost identical in color to Topside. They also come with black accessories that work well with the original version as well as many other figures. As they can consistently be had for under $4.00, this is a figure mold that you can amass quite easily in that manner. It really allows you to enjoy the quality of this figure for a price that is easy to handle. I can't get enough of these guys. Their use in my collection lends itself to army building and I do whenever I get the chance. I think, if you are willing to give this figure the benefit of the doubt, that you will find him some nice uses in your collection as well.

Cutter is a good figure, but not one that I need more of. The Funskool version covers that for me. What do you think of this guy? Let me know. 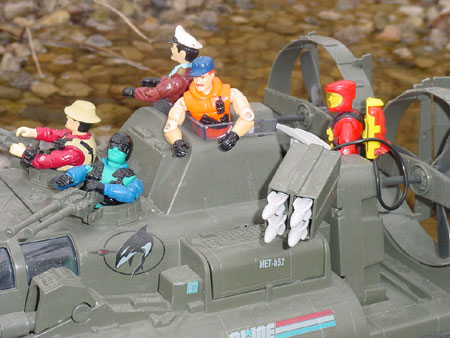 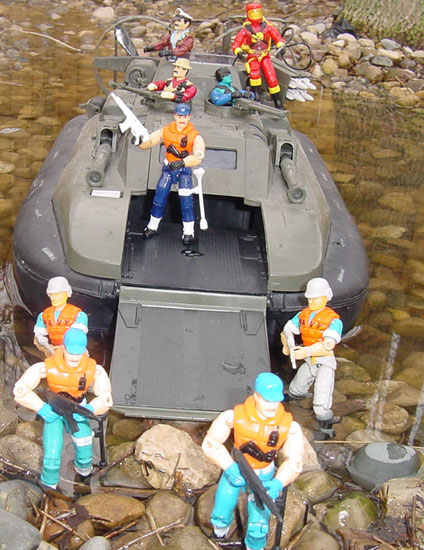 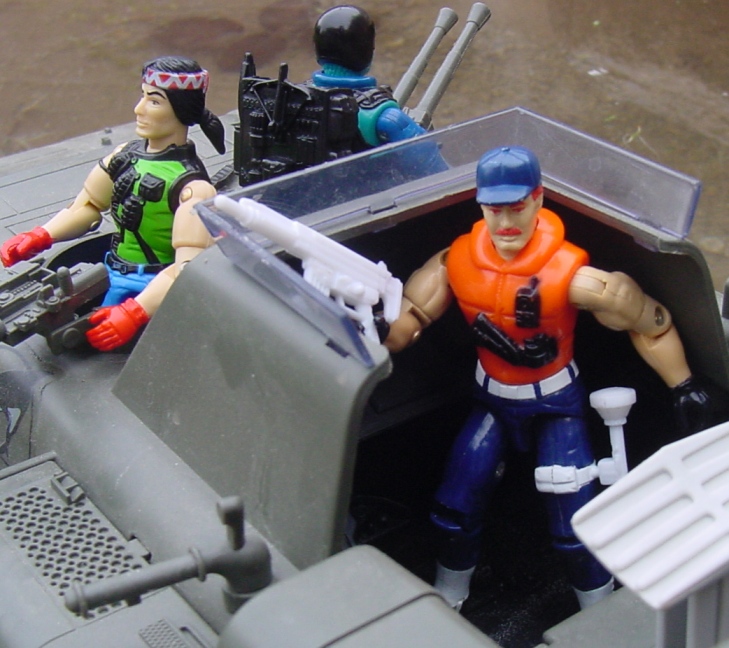 Posted by Robot_Sonic at 8:57 AM
Email ThisBlogThis!Share to TwitterShare to FacebookShare to Pinterest
Labels: 1992, Cutter, DEF