There are roughly 625 figures and variations in the American Joe line. (Currently!) If you add in the 75-100 major foreign exclusive figure variations (Currently!), there are easily over 700 unique figure variations for Joe collectors to track down. With a figure line that is as massive as Joe, it is easy for many smaller characters and figures to slip out of collectors' minds and become obscurities. While this site specializes in figures like that, it has become harder and harder to find figures that are not new releases, obscure variations, or foreign exclusives who fit this criteria. Recently, while sorting through some old bagged figures in my collection, I came across a figure who perfectly fit the Forgotten Figures archetype. However, as I only had the figure bagged, I had never really considered him for any purpose in my collection. As I looked at him, though, it finally dawned on me for what purpose I could use this figure. While not everyone may see this figure in the capacity I have given him, I think you will agree that the Cobra Air Devil is an interesting figure that really fleshes out a Joe collection.

I've never liked the Wild Weasel figure. After I saw how he was originally drawn in the comic, I really wanted him. However, once I got the actual figure, I just never liked him. As a character, Wild Weasel was great. As a figure, though, he really fails. (However, I am liking the Wild Weasel repaint that is currently available from Funskool. If I have occasion to acquire some, they will become the entry level Air Vipers that we were not given by Hasbro.) Over time, I've created new Cobra pilots by using figures such as Cesspool or the 1991 Bat. However, none of them ever represented Wild Weasel. As his figure was so poor, I just kind of forgot about the character and never really utilized him in any capacity. It was a shame, though, as Wild Weasel was one of the classic Cobra characters who really deserved a remake. He was the definitive Cobra pilot and would have made an excellent addition to a later edition Cobra aircraft, or even as a regular carded figure. Alas, it was not to be.

When I recently looked at my Air Devil figure, though, I realized he was nicely similar to Wild Weasel. In fact, I thought that the Air Devil would make an excellent Wild Weasel V2. While I had long concentrated on finding new combat pilots in my Cobra army, I never really thought about who would actually fly Cobra Commander around. The Baroness did this in the comic, but I use her as more of an ally to Destro, so she doesn't really fit this role. Wild Weasel, though, does. Now that I've assigned his character to this figure, I finally had someone who I liked in a previously underused capacity. With this figure in place, CC would have someone to fly him around, and would add another trusted associate to his cabal. It also gave me a way to keep an underused character around without creating a new one. (As I'm prone to do.) The look of this figure is such that were I to call him Wild Weasel in a dio-story or something, I think at least some people would think that this was really intended to be an update to that classic character.

The look of this figure is great. While many people dismiss any figure made after 1991, 1992 really offered some great figure sculpts in solid color schemes. The Air Devil is no exception. His deep red uniform with the black details is worthy of just about any Cobra character. The silver highlights on his uniform details give him some depth but still allow the figure to be well done with simplicity. His head sculpt shows more skin than many classic Cobra army builders, but is is also done well enough that it allows the figure more diversity in use. Even without his unique visor, you can put an airmask on the figure that makes him appear even more the pilot. The Air Devil is the type of figure that really fits with figures from any year. His colors and sculpt are indicative that Hasbro was still capable of producing high quality figures as the line wound down. Overlooking any single year of figures just due to their release date really limits a collection and prevents people from enjoying hidden gems like the Air Devil who were released near the bitter end.

Going forward, even as Wild Weasel, this figure will never be a heavily used member of my collection. However, for the niches that require pilots, you can be sure that this guy will be at the forefront. The deep red color and obscure mold makes this guy a great addition to dioramas. In that capacity, I think this figure will continue to flourish. He will continue to pilot Cobra Commander around in whatever aircraft is the Commander's choice that day. From time to time, he will also be used as the lead Rattler pilot for very high level missions. I, though, rarely use my larger aircraft. They are more difficult to play with and I've always found the smaller, lighter aircraft to offer more. However, when the times call for something a bit more robust, you can be sure that this figure, as the Wild Weasel character, will be at the controls.

Like all of the glider figures from 1992, the Cobra Air Devil is very tough to find. I got mine MIB from Hasbro Canada a couple of years ago. They offered most of the glider figures, but none of them had any accessories. As such, finding a mint, complete with filecard Air Devil is an even tougher proposition. Like most of the later edition figures, though, scarcity does not equate to pricey with this figure. Even MOC, you can find them for affordable prices. However, finding them in even that condition is challenging. I've only seen a handful of Air Devils offered for sale over the years. I think that is the primary reason that a figure of this quality has gone so unnoticed by the collecting community. Perhaps, with a little exposure, that will change. I'm just glad that I saw this guy when Wild Weasel was kind of on my mind. It allowed me to get more use out of an excellently done figure while updating a character I'd long neglected. Should you have occasion to add the Air Devil to your collection, I think you will find him an asset as well.

I like the Air Devil figure and would like a couple more. I also need his visor, gun, and filecard to complete the one I have. If you have any of these guys, or his accessories available, email me. 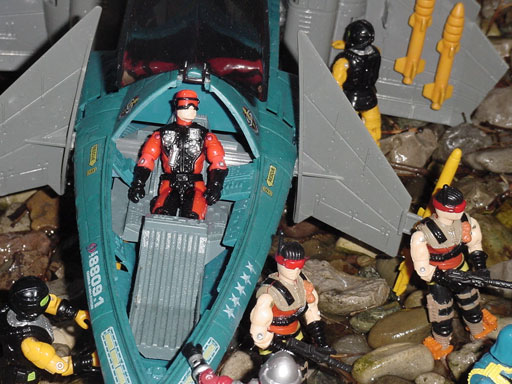 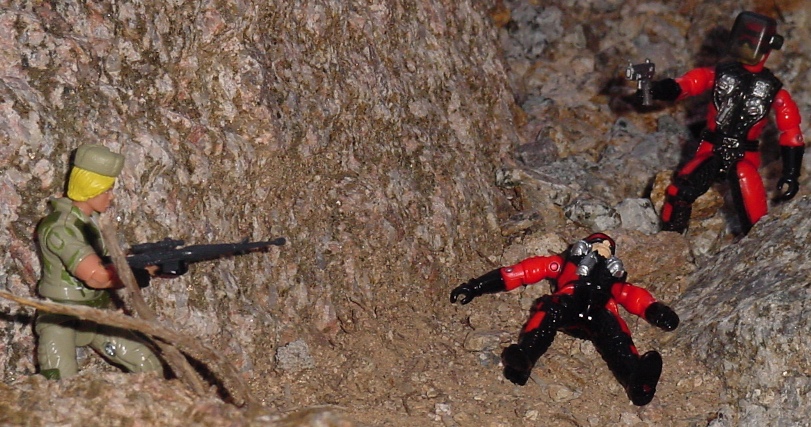 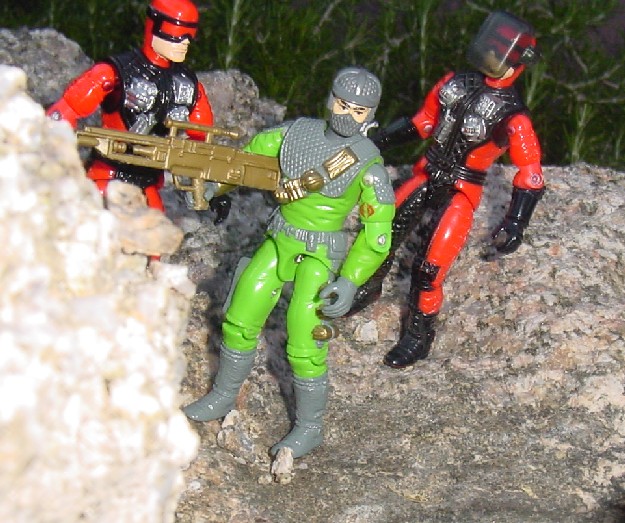 Posted by Robot_Sonic at 3:51 PM
Email ThisBlogThis!Share to TwitterShare to FacebookShare to Pinterest
Labels: 1992, Air Devil