Back in 1996, there were pretty much no Joe toys left on the shelves of traditional retail stores. You could find a few figures here and there and an occasional overstock vehicle or two, but most all the mainstream stores had sold out the prior year. However, a closeout store called Big Lots still managed to have some good stuff. Even into late '96, you could find many of the 1994 Joe vehicles (as well as the full range of Sgt. Savage figures) in their stores. It was here, among Armor Bots and Sgt. Savage Grizzlies that I found a neat little toy called the Razor Blade.

The Razor Blade is a small attack chopper that holds a single figure. It was one of the few new vehicles offered in 1994. The line's imminent demise lead to a more modest toy line that year. Despite its late manufacture date, though, the Razor Blade still fits in well with vehicles from any year of the line. It has sturdy construction, a realistic military color scheme, some great play features, and heavy detail. It does certainly not display the full range of realistic play features that were hallmark of the earliest Joe vehicles. But, it does have many of the qualities that made the original vehicles so much fun. In that regard, the Razor Blade is really a vehicles that most collectors should consider adding to their collections.

When I first acquired the Razor Blade, I thought it a great replacement for the V1 Locust. During my teen years, my much younger neighbor had a V1 Locust chopper and I thought it was awesome. However, I wasn't buying Joes at the time and I never got one. (I'm still missing one, today.) However, I had memories of the that toy and liked the idea of small, mobile, one man attack chopper that would be able to engage targets both on the ground and in the air. For this purpose, the Razor Blade was perfect. It is a smaller toy that allows for more maneuverability and greater play value. As such, it quickly became my Joe air power of choice. Even today, the Razor Blade is Joe's first line of defense against Cobra's Firebats and AGP Pods. It's smaller size allows for greater ease of use and fits better against the smaller, more mobile Cobra aircraft.

The Razor Blade is not without its problems. First off, it did not include a pilot. It's a small point, but something to consider. On top of that, like the Snowcat, the Razor Blade has no main guns. It only has a side mounted spring loaded missile launcher. It also has pegs for 4 additional missiles on the sides. The lack of gun, though, was almost enough for me to skip this toy. However, the launcher, when loaded with a missile, looks enough like a side mounted cannon that I've been able to use it as such. This has gotten me past the offensive weaponry problems and allowed the Razor Blade to assume a greater role in my collection.

Perhaps the coolest feature of the Razor Blade, though, is also its most forgotten. The Razor Blade also includes a long string, a top mounted pulley and a plastic contraption that is intended to be airlift gear. The purpose of these accessories was that the pulley would be mounted to the copter. It could then slide down the string at a waiting figure who was wearing the airlift gear. The top bar would then be picked up by the chopper's skids and the waiting figure would be lifted away to safety. While the intent was really cool, you can imagine how well this worked in practice. It was nearly impossible to get it to work correctly and by virtue of putting the toy on the string, it took away from the Razor Blade's effectiveness as a helicopter. I would have much preferred it to have simply had a winch on the bottom of the body that could have been utilized similarly with the airlift gear. Still, if you are looking for a complete Razor Blade, be sure it includes all of these pieces as well.

It's actually kind of tough to find a mint, complete Razor Blade. The chopper was produced in much lower quantities and much of the run was clearanced out rather than being sold at traditional toy retail outlets. As such, few collectors have the Razor Blade. However, even fewer collectors care. Unfortunately, there are a few other small copters in the Joe line that are more fun to own than the Razor Blade. As such, aside from those who really want to find this toy, there isn't much collector demand for the Razor Blade. That's nice, though, as you can find Razor Blades for decent prices when you want one. As a toy, it is a neat little piece of a Joe collection. While it has its drawbacks, they are not so great as to preclude enjoyment. By 1994, even making it to that point leaves the Razor Blade as a success.

I like the Razor Blade. Have you ever seen one with silver highlights? If so, let me know. 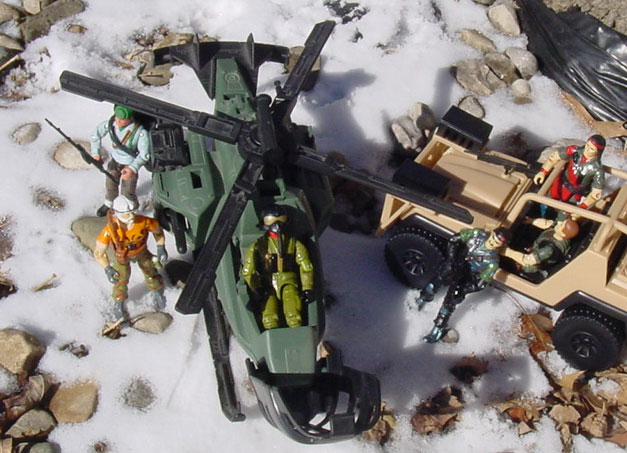 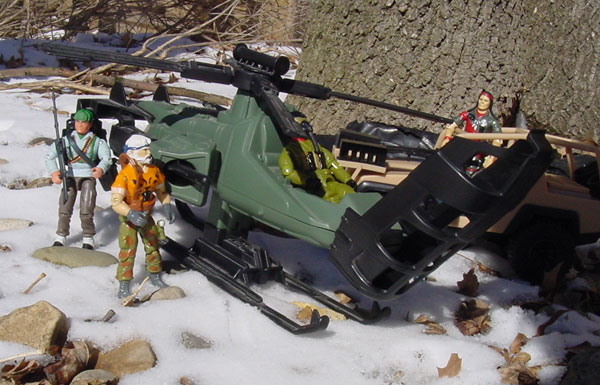