One of the most common themes that I've promoted throughout the history of this site has been the hidden quality of many of the later release Joe figures. While I have long conceded that many of the color schemes used on those figures from '92-'94 were less than stellar, the figure designs themselves were of equal, or greater, quality than many of the figures from collector favorite years. Recent repaints of some of these later molds have shown how a hated figure, redone can become a very nice piece of a collection. However, even in the neon years, there were a few figures that were just done right. They are few and far between, especially as a retail release, but can be a great way to add some depth to a collection without sacrificing the standards laid down by previous Joe years. If an average Joe collector has one figure from 1993 in his collection, it is usually the 1993 Cobra Commander. If he has a second figure from '93, though, it tends to be the Headhunter Stormtrooper.

This figure is nothing short of incredible. He combines solid colors, a cool concept and an incredible mold into a package that creates one of the best Cobra figures ever released. He starts with an awesome head sculpt. He has Range-Viper-esque skull teeth molded into his mouth socket which are bracketed by insect-like pincers that give him an other-worldly, frightening look. His more bulky body sculpt is accentuated by spikes on his arms and chest. These are, according to the filecard, body armour that is designed to fend off would be tacklers in an urban warfare type environment. His chest is covered in molded on weapons and additional body armour that leave you with the impression that an army of Headhunter Stormtroopers would not be something you would want to run into in a dark alley. The subtle blends of charcoal grey and blacks give an overall dark impression of the figure, but his golden highlights bring him to life. Really, photos don't do the figure justice as his darker elements tend to be lost in a digital image.

The Headhunter Stormtrooper serves a dual role in my collection. As I have but one of him, he sees some time as the Headhunter field commander. He is in charge of the Cobra Headhunter units as they sweep the streets and alleys of an attacked urban center. His units follow behind the more aggressive and less thorough Alley Vipers and ensure that the "Cobra Urban Death Squad" of which he is a part completely finishes their duties. At some point, I'll probably promote the character portrayed by the figure (much like I did with the character portrayed by Decimator when I promoted him to Urzor) and find a named Cobra for him to take over. Until then, though, I like this guy's look at the lead of a Headhunter unit.

Many collectors (at least, those lucky enough to have multiples of this figure) use the Headhunter Stormtrooper as an army builder. In this capacity, the figure also works incredibly well. He is the unique figure whose mold allows him to be both unique enough to be a named Cobra character yet uniform enough that he can also function as an army builder. Again, the versatility is the extra little attribute that pushes this figure beyond just having a cool mold in good colors. I think that figures who take a few chances often end up being among the best in the history of the line. As most of the new re-releases of classic molds have been vanilla, that would be something for Hasbro to consider as they go forward. From the looks of the upcoming Python Patrol, though, the Hasbro designers are getting a little bolder. The end result appears to be something very interesting that has the potential to become a collector favorite. Looking back at the success of figures like the Headhunter Stormtrooper helps nurture the same ideas that made this figure work and gives them a better chance to be incorporated in still-to-come figures.

I've noticed something in the past year or so in the Joe hobby. When I first joined the online Joe world, the general consensus was that the last great Joe year was 1987. There were even a few people who said that '87 had some serious problems. Recently, though, I've seen that consensus "last great year" move from 1987 up to 1990. In fact, there are more and more fans who are even saying that the '91 basic figure assortment should be on equal standing with all the prior years. What has happened is that the the influx of new fans to the online Joe world are now of the age where their childhood memories consisted of figures from later in the line. Their only exposure to the '82-'85 years was either through hand-me-downs from older siblings or re-runs of the cartoon. As such, much of the nostalgic flair for many of the earliest figures has simmered down while many figures from the late '80's and early '90's are starting to see their popularity rise.

I would love to see the Headhunter Stormtrooper re-released. He, along with the original Headhunter, would be a most welcome repaint in the new series. However, like the Headhunter, the Headhunter Stormtrooper mold was sent to Brazil. Around 1995, he was released down there in a very similar color scheme as a glider pilot named Asa Negra. The figure is similar to the American figure and makes for a neat companion piece to any Headhunter army. Unfortunately, many of the figure molds that were sent to Brazil for these late release Brazilian figures were probably not returned. We have not seen any figure molds from those series of figures in the re-releases. With the knowledge that Hasbro has had some difficulty in re-acquiring molds from South America, it is very possible that both the Headhunter and Headhunter Stormtrooper will not ever appear on American retail shelves again. It is unfortunate as both these figures are great examples of later American figure molds done right that the collecting world has relatively ignored.

***Update 1/23/09***   The Headhunter Stormtrooper mold did reappear in 2008. Instead of a cheap retail release, though, the figure was offered in an expensive convention set. Worse, though, was that the figure from 2008 is a worse color scheme than this version from 15 years earlier. (The convention figure also featured the legs from the Rock Viper rather than the original legs.) It was nice to see the mold again, but seeing it a substantially worse rendition than the original was a disappointing waste of a high quality mold. Maybe it will appear again one day in much better colors. But, for now, this original version remains the best edition of this mold that is available.   ***End 1/23/09 Update***

Headhunter Stormtroopers can be expensive. Scanning Ebay, you can find carded ones for around $25 while loose, mint, complete figures go in the $15-$18 range. These prices make the Headhunter Stormtrooper the most expensive regular, retail release figure from 1993. However, you can get lucky. I found a carded Headhunter Stormtrooper on March 8th, 2003 at a used book store in Mesa, Arizona for $8.00. (They also had a 1994 Metal Head, 1993 Mutt (himself a hard figure to find!), a 1993 Headhunter and a 1994 Cobra Blackstar all for the same price.) Most 1993 figures found retail release in odd outlets. As such, there are still a whole lot of carded '93's out there that are sitting in weird second hand stores just waiting for a collector to find them. The great thing about the Headhunter Stormtrooper is that he isn't a character that the average toy dealer/collector/seller knows much about. While they will sell easy-to-find versions of Snake Eyes and Storm Shadow for ridiculous prices, they may not be aware that the current items of high desirability in the Joe world are the army builder figures. As such, guys like the Headhunter Stormtrooper are often modestly priced at outlets that are not frequented by Joe collectors. This makes the possibility of acquiring this figure for much less than the going rate a distinct possibility. With a figure of this quality, though, I wouldn't mind paying a bit more. The Headhunter Stormtrooper is one of the coolest figures released after 1992 and is certainly a deserving figure to be in anyone's collection.

I've got one Headhunter Stormtrooper. While I would like more, I know that anyone reading this page isn't going to let them go cheap. ;-> Do you like this figure? Who is your favorite figure from 1993?  Let me know. 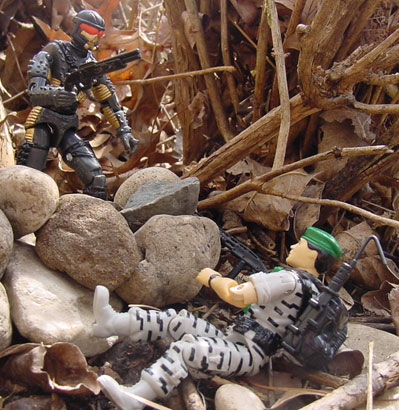 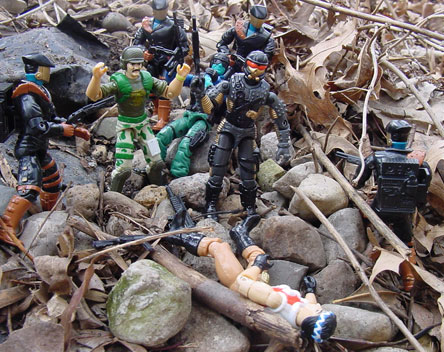 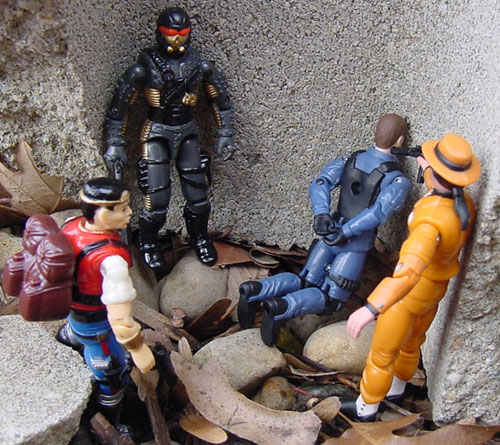 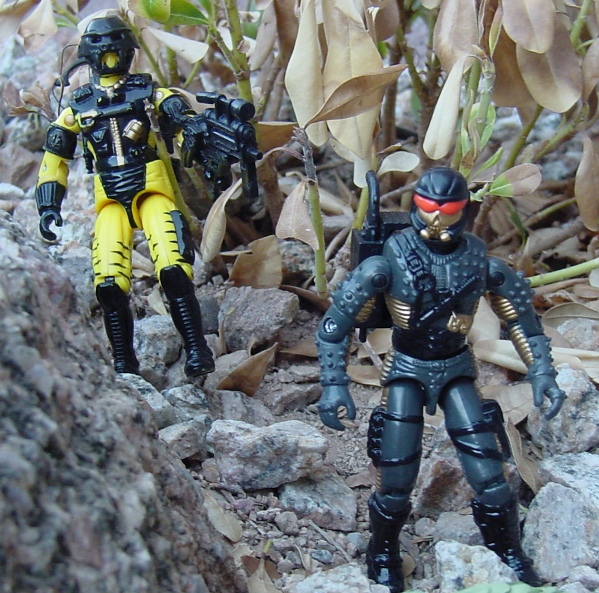 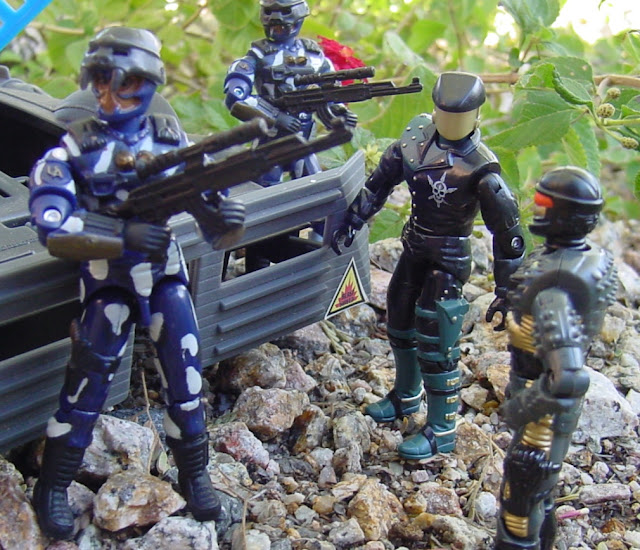