As far as the toy line goes, Cobra has always been missing something. While the nameless ranks of Cobras have grown to dozens of specialties, there was always one figure who was missing. This specialist was represented in the Joe line all the way back in 1983 and is so important that it is hard to believe it is still missing. While Cobra is often portrayed a heartless organization that has little care for its soldiers, the sheer financial investment in a Viper alone would be enough to warrant the creation of a medical Viper of some sort. While that highly desired figure is still missing from the line, 2003 has finally given us a true Cobra doctor. He is not a mad scientist, but a real, true medical doctor whose purpose is to heal wounded Cobras. The best part about this figure is that he has a characterization on par with those of the line's glory days. Not cliched and very needed, Scalpel is quickly becoming my favorite figure of Wave 5.

As a character, Scalpel is well conceived. He is a medical hack: a doctor with a farcical education and an elicit past. However, his character avoids being overly cliched. The fact is, his filecard suggests that Scalpel is a very good doctor. It is in this point where I was a made a fan of this character. The evil doctor who does bad work has been done to death in pulp fiction. Having a medical mercenary who is actually competent, maybe even gifted, is a notion a little different from what one would expect. It is that freshness of character that is breathing new life into the Joe line. While the older characters were well done and deserve continued existence, well done new characters, like Scalpel, show that even a toy line with a legacy like Joe can still show ingenuity. Bright spots like Scalpel are just further proof that the new line has a place in the Joe pantheon and is very capable of sustaining another long retail run.

As a figure, Scalpel has many high points a few low ones. First off, his is brightly colored. While this may be considered a detriment to many, Scalpel is actually colored in the same manner as you would find medical personnel in a real hospital. As such, for him, the color is not only realistic, but it works. The red and white details only accentuate the primary blue color and showcase the mold's details. As a mold, Scalpel is modestly detailed, but they are all done with purpose. As such, the figure looks as someone with his specialty would be expected. Unlike many of the Wave 5 figures, Scalpel is also well proportioned. He looks very much like a classic Joe figure and does not have the exaggerated limbs or appendages that were prevalent on earlier figure waves. His face is well done and shows an intensity that you would hope to see on your own surgeon's face. He still has the youth, though, that separates this character from more well established Cobra characters.

Scalpel's accessories are both nice and bad. He has a small saw attachment on his right wrist. Aesthetically, it is perfect. It folds up nicely when Scalpel does not need it, but provides a neat little feature that adds to the character. He also has a helmet with a visor. With it on, Scalpel looks cool, but, in my opinion, no more so than when he is bare-headed. He also includes a knife. The most interesting, and maddening, accessory, though, is his shoulder pads. On the back of the pads are two hooks. Apparently, these hooks are for carrying wounded out of harm's way. In form, they look neat. In function, they are totally useless. Instead of utilizing the traditional backpack hole on the figure, Scalpel has another small hole above his screw slot. You insert a peg on his shoulder pads into this slot. However, this is not adequate to keep the pads on. Just moving the figure causes them to fall off. Don't even try to use the hooks for their intended purpose and this would not only move the hooks around (they are on ball joints and move rather freely) but knock the pads off of the figure altogether. As an idea, this feature was neat. As a real accessory, though, it did not work and will be the source of many a child's frustration as he tries to play with the figure.

There is one little detail on the Scalpel figure that grabbed my attention. He has a very slight pink scar around his left eye. It is not as pronounced as Xamot or the Flying Scorpion's, but it is there. To me, it suggests that Scalpel's Aryan appearance may be less the result of genetics and more the result of identity altering surgery. My characterization of Scalpel has him as an understudy of Dr. Mindbender. Mindbender's character has been defined by his penchant for appearance changing surgery and is known to push the envelope of what is medically acceptable. Going from the old sculpt Joe history, Mindbender ran into a little problem as he changed his countenance, though. He could not make himself look totally human. He was always left with grotesque scars that would have made him a pariah. Scalpel, though, changed all that. With his medical skill and Mindbender's lack of professional ethics, Scalpel is the doctor who made Mindbender look human again. I explain away Scalpel's slight scar as his first attempt. Mindbender, his vanity making him ever wary of further attempts to save his face, wanted to see proof of Scalpel's work. In order to ensure that he was capable of performing the complex operations Mindbender would need, Scalpel altered his own appearance. Mindbender, though, ensured that there was one slight little problem. This would leave the scar on Scalpel's face and remain a constant reminder to Scalpel that his medical skill was no match for Mindbender's ruthlessness. How this will play out in time will be a nice way for me to keep the Scalpel character near the front of my collection.

There are two versions of Scalpel. The first version of him has a painted flesh head. He also only comes with one of the spikes that attaches to his shoulder pads. The later version has a molded flesh head and both spikes. It appears that the first version will be the lesser produced variation. However, both of them are ample enough that there shouldn't ever be too much of a premium ever attached to one head over the other. Aside from that, Scalpels are readily available for retail prices right now. Going forward, I do not see Scalpel being a heavily sought after figure. While cool, he just isn't that major of player in the Cobra world for people to flock to him heavily. (Of course, were a new Joe cartoon to come out and Scalpel play a major role in that, his popularity could change dramatically.) This isn't a bad thing and it does not detract from the overall quality of the figure. Instead it just shows that it will still be possible for collectors to acquire nicely done figures like this one for some time. I do not want every Cobra figure released to either be a faceless army builder or a rehash of an established character. New blood like Scalpel is a great way to keep the Cobra ranks fresh without sacrificing the evil organization's legacy.

Scalpel is a great figure. I know some are using him as a Medi-Viper. I, though, will continue to use him as a new character. How will you use him? Let me know. 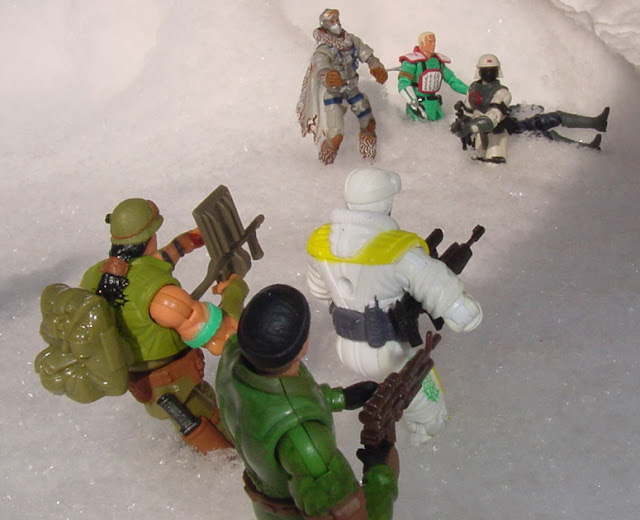 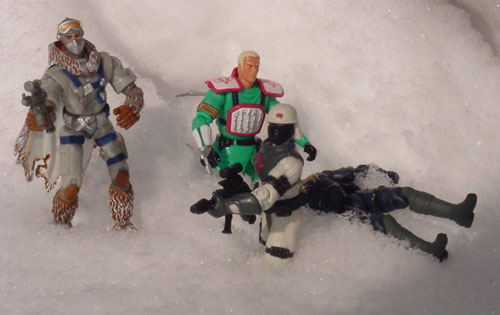 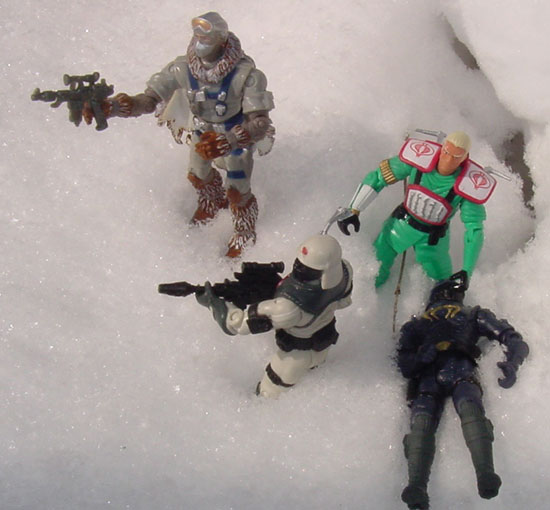 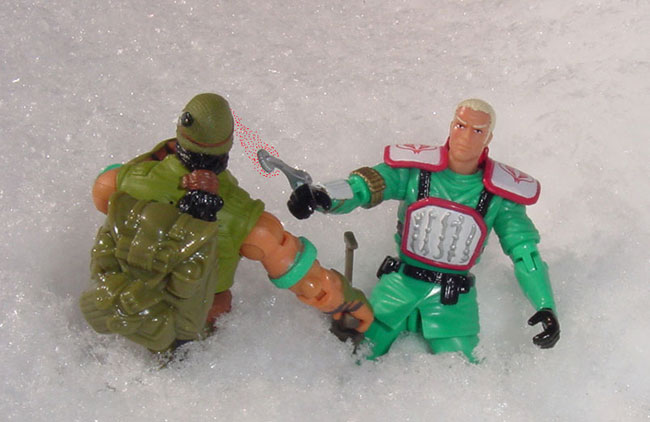 Posted by Robot_Sonic at 1:58 PM
Email ThisBlogThis!Share to TwitterShare to FacebookShare to Pinterest
Labels: 2003, JvC, Scalpel