When the first pictures of this figure surfaced, many people simply laughed. A version of the '91 Grunt mold colored in aqua blue and bright orange simply didn't capture the hearts of adult Joe collectors. As I'm a bizarre figure junkie, though, I couldn't wait to get one of these guys. Once I did, I discovered something rather interesting: the figure is actually very well done and nice to look at! As such, I felt it appropriate to profile him.

At first glance, Grunt looks like another Funskool freak job. He is bright, loud and ostentatious. However, when I first saw him, I immediately thought that he would make a great field medic. While the Joe line has its share of realistic medics, there is always a need for easily identifiable medical personnel. Grunt works well in that capacity. Beyond the fact that he comes with Lifeline's medical case, the bright orange shirt would tell any hostile elements that he is a non-combatant and is there to help, not injure. His rather robust physique also fits with my assigned role of a field medic and extraction specialist. Beyond that, the orange and blue combination would allow this figure to work as a deck hand on the USS Flagg. He could be another simple technician who could be used to help flesh out any Flagg.

This role may seem rather limited and it is. This is not the type of figure who will see extensive use in my collection. He is just another of a growing number of role-playing figures who are called upon when a specific scenario arises. What makes the Joe line so great (especially when you expand your collection beyond U.S. borders) is that it has a figure to fill whatever need you might devise. While core characters are what really drives the line, what keeps it fresh and sets it apart from other military lines is that there is so much depth. While outwardly goofy, figures like this Grunt do serve a valuable purpose. They keep the line a little more diverse than the "realistic" military themed figure and allow the line to be enjoyed by a wider cross section of people.

This figure is actually very well done. First off, he features a full 7 colors interspersed throughout his mold. The construction is also very solid and my sample shows none of the pratfalls than can befall Funskool figures. The colors are bright and the paint masks are sharp. In the accessory arena, the figure is lacking. He comes with Lifeline's medical case and it has a little surprise inside. Grunt also comes with a "Tattoo Maker". It is a wooden stamp that marks the G.I. Joe logo onto anything you want. However, it needs ink. While the figure does not include any, the medical case opens up to reveal an inkpad. That way, if you do happen to have some ink and no pad, you can use the inside of Grunt's case. Ingenious! He also has a blue gun that does nothing for me. It is from the Super Sonic Fighter Road Pig. As a sculpt, it isn't bad. However, the blue color really kills it. As I will be using this figure as a non-combatant, though, his lack of weapons really isn't a major concern.

Most collectors have now seen the pictures of the upcoming KB Toys exclusive Crimson Tank. It includes a repainted Crimson Guard Immortal figure. This implies that Hasbro has reacquired the CGI mold from Funskool. Apparently, Funskool has returned a full 18 molds to Hasbro's control. (Don't ask me which molds as I don't know.) While many collectors may herald this news and enjoy the fact that Hasbro now has more molds to use, I think that it will actually hurt some segments of the hobby in the long run. I look at it this way, for over 2 years now, Joe collectors have always had various Funskool army building figures available. That meant that, at any given time, a collector could go online and buy a few new Cobra figures for retail price. The essentially endless supply of the Funskool figures kept demand in check and allowed for very low prices. As such, many people have been able to build up armies of CGI's, Night Vipers and Desert Scorpions. Now that these molds are back in Hasbro's control, though, the supply will be much more closely guarded. Hasbro releases new figures for a very short window of time. After those are gone, collectors who missed out or who were financially unable to acquire all they wanted in the short retail availability are forced to turn to the secondary market to get the figures they want. This drives up secondary market prices and shuts many people out of some figure molds they enjoy.

I think Funskool's return of some figure molds is very much a "be careful what you wish for; you just might get it" type of scenario. For now, there is enough overstock on the no longer available Funskool figures that availability will not be affected. In time, though, that will not be the case. Once dealers sell out of their stock on hand, certain figures will simply be gone and will only be available on the second hand market. In the meantime, those figure molds that are returned to the U.S. will see a short release (perhaps only in a higher priced Convention set) and may not be available in the quantities people want. This will lead to increased demand and higher prices for many figures that were once cheap and plentiful. Explain to me again how this is a good thing.

On top of that, my personal feeling on many of the molds that have been consistently produced by Funskool in recent years are a bit tired. Frankly, I'm not all that excited about the possibility of Hasbro re-using these molds since I've been able to add the Funskool versions of them to my collection. Like the Viper, Alley Viper, Mirage and Big Ben, the Funskool molds are a bit over done. They just don't have the originality factor that will make me really want to add a new, American version to my collection. I would rather Hasbro spend their time and energy either re-acquiring less heralded and seldom re-used molds from Brazil or digging other molds (like those in the upcoming Python Patrol pack) than going after molds that have seen great recent production in India. Call it a hunch, but I think the collector's marketplace will reflect this feeling.

If you want a Funskool Grunt (and you know you do now!) they are not too hard to get. Right now, the first shipments have yet to fully saturate the online dealer market. Within a week or two, though, just about every online dealer will have them in stock for under $5 each. To me, that continues to be a great deal, especially when the Funskool stuff is of this quality. In time, I can see me ending up with 4-6 Grunt figures. They appear to have some uses that I think would lend themselves to army building. Unfortunately, I think I'm in the minority on this point and the Funskool Grunt will join Cross Country, Captain Grid Iron and General Hawk at the bottom of the Funskool "hot" figure lists. That's not a bad thing, but I think that, given a chance, this figure can find a niche in most any collection. I know that I enjoy this figure and will use him, from time to time. Hopefully, I will not be alone in that assessment.

You may not like the figure, but if Funskool can continue the level of quality that is seen on Grunt, then their future offerings should be very nice. What do you think of this figure? Let me know. 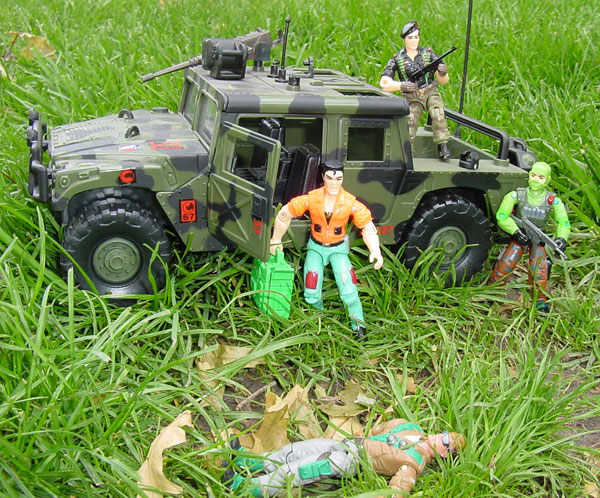