Big Brawler is not a character you hear a lot of positive comments about. If you take that and paint him in an abdominal mish-mash of bright yellow and blood red, you quickly realize that even a somewhat solid mold can be completely ruined. Such is the case with the Funskool Big Brawler figure. He is an unpopular character now painted in a terrible color scheme. However, while this figure will never see much use in real settings, he does have a kitsch about him that makes the figure fun to own.

For many Joe fans, the character of Big Brawler is a bit of a sore subject. Aside from the fact that Big Brawler has been a replacement for the fan favorite character Outback, he is also named after a real life G.I. Joe fan. Be it caused by jealousy or the organization with whom this individual is affiliated, fans have simply not liked the existence of the Big Brawler character. To me, the character doesn't much fit into my Joeverse. His various figures do have uses, but more as nameless cannon fodder than original characters. It's not due to any of the issues I referred to above. Were I given the chance to have a Joe figure named after me, I would jump at it without giving a thought to how other collectors might perceive it. My reasons are that the Big Brawler figures that have been released so far have been unspectacular. I've always felt the V1 Outback mold was relatively bland without his web gear attached. As that accessory has been omitted in Big Brawler releases, it leaves the figure as uninteresting. The same it true of the Tiger Force Big Brawler. Had he come with Salvo's accessories, then the figure might have been better received.

There are a few peculiarities about this figure. First off, the figure uses the entire body from the V1 Outback figure. However, instead of the standard Big Brawler head, it uses the head from the Ambush. This is important as it points to two distinct molds that we can now confirm are in Funskool's hands. Ambush and Outback now join Law and Major Bludd as recently produced American figures who have been shipped off to Funskool. The figure also has one unique feature. The flashlight hole that was originally sculpted on Outback's leg has been filled in. It's a small detail, but something to note about the mold. The final little oddity about the Funskool Big Brawler is his card art. If you look at his pose, it is eerily reminiscent of the 1985 Torch card art. In looking at other Funskool exclusive art, it appears that Funskool either uses original Joe art as a template or mimics the old art to keep their look consistent with other Joe product that is available in the world. (Grunt's art resembles that of the 1985 Tele-Viper.)

Big Brawler has picked up a bit of a fan following. The netizens of JoeCustoms.com have taken a liking to him. It is more of a tongue-in-cheek thing, but it allows Big Brawler to join Steve Urkel and Ralph Wiggum in the realm of lovable losers. This version has only made the figure a bit more popular. This loud color scheme only enhances Big Brawler's reputation as a buffoon. However, in situations like this, the more there is mock, the more there is like about this character. In time, this could pass, but, for now, it gives Big Brawler a bit of limelight that isn't negative.

With this in mind, I don't ever see this version of Big Brawler becoming popular in my collection. Unlike the recent Funskool Grunt who is colored in an equally odd way, I don't see a use for this figure. To me, the combination of the mold and the colors just don't work. As such, I see this figure being a comical interlude rather than a major player in my collection. When I want my Joes to simply do something wacky, this will be a figure I reach for. He is a whimsical approach to the hobby that is something very different from what we see from Hasbro. In that sense, the figure is okay. For about $4, he is a great way to bring a little color to your collection. (Plus, the carded version comes with Budo's sword. Big Brawler can now also be a ninja!!!) He's not someone who is imperative, but is kind of fun.

As far as availability goes, Big Brawler is available from most of your major Funskool dealers. In time, he will join figures like Captain Grid-Iron and General Hawk on the Funskool scrap heap as figures that really have no purpose. However, as collectors seem to have gotten more serious in recent years, a figure like this provides a fun diversion. He has no use except in over-the-top humourous situations. As such, he provides a bit of levity to a hobby that is all army-builder this or variant that. That's an innocence that is hard to capture and is, at least by me, greatly appreciated.

Sure, this figure is ridiculous, but that's what makes him fun to own. Will you be getting one of these guys? 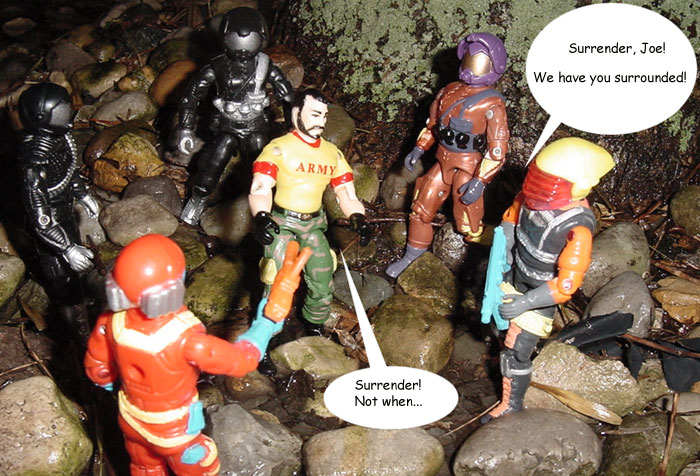 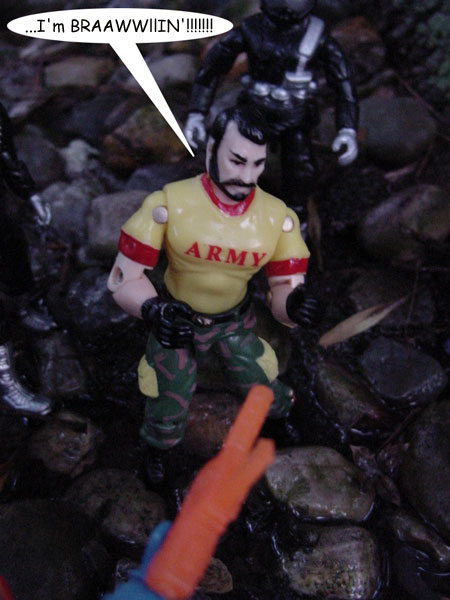 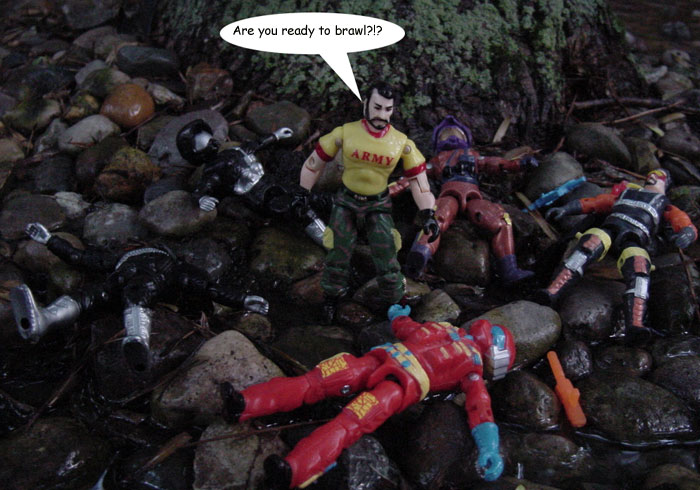 Posted by Robot_Sonic at 10:09 AM
Email ThisBlogThis!Share to TwitterShare to FacebookShare to Pinterest
Labels: 2003, Big Brawler, Funskool