After Cover Girl won the most recent Feature Character Spotlight sponsored by YoJoe.com, I was left wondering how I was going to profile the character. As a child, my Cover Girl figure disappeared only weeks after I acquired her. As such, I have no memories of her role in my childhood collection. As an adult, I have had little use for Cover Girl as her figure is rather horrid and really doesn't offer anything special to a collection. This didn't leave me with many options until I remembered a figure I acquired several years ago and had just packed into a box, never to really be seen again. Back in late 2000, I acquired a few Argentine exclusive figures for bargain basement prices. One of the figures I picked up was the Argentine release of the Cover Girl figure named Sparta.

The first thing about Sparta that attracted my attention was her exclusive card art. Many of the early Argentine Exclusives featured original card art that was only available in South America. When you couple this with the exclusive color schemes and the different use of figure molds that were previously only available as vehicle drivers in the US, the Argentine Joe line becomes a nice way to broaden a collection. I will state that the figure quality is hit and miss and the Argentine stuff I've had is not quite as nicely done as the Brazilian exclusive figures as the paint apps can be a bit off and the figures can be brittle to the touch. Still, if you take these figures for what they are and aren't too hard on them, they can be integrated into a predominantly American Joe collection.

Sparta's specialty is a "Secret Agent". While that may be a bit broad, I think that it allows her some leeway in character that could make her quite interesting. As I've done with Quarrel, Sparta has become a different character for me who is busier when she isn't being used as a figure than when she is. It is the idea of her infiltration skills that makes her appealing and useful in my collection. As a figure, she isn't all that spectacular. The idea of her as a South American born spy who is living on Cobra Island and reporting Cobra activity back to the Joes, though, is more interesting. She is a character that gives the Joe team a little more depth and makes them more of a truly international anti-terrorist force. In this day and age, I think the inclusion of foreign Joes is imperative to their overall success. Cobra is surely a global organization and having a team of only Americans working against them would allow Cobra great advantages in it's operations outside of the US.

Sparta does sport an exclusive color scheme. It was obviously based on Cover Girl's, but is slightly different. One thing to note is that the Argentine and Brazilian figures are slightly different and you can tell the difference between the two. Their card art is the same, but the Brazilian figure's package is also distinctively different. Plus, the Argentine figure has an accessory variation where some include Stalker's gun and others include Footloose's gun. Still, regardless of the differences, Sparta figures are simple to track down and are a more cost effective method of diversifying your female Joe ranks.

Both Brazilian and Argentine Spartas are easy to find. You can still get either of them MOC for under $20 or so. One thing to note, though, is that most of the Sparta figures that are readily available on the second hand market are from overstock that was not properly stored in South America. This means that many of the figures may not be of indicative quality as compared to other contemporary South American releases. Many Spartas are brittle and require care when handling them so they do not break. This is a function of being stored in high temperature environments for a long period of time and is something to remember when you go to add Sparta to your collection. Still, for the money, Sparta is a great way to pick up a carded version of a mold that was never offered that way in the US. The exclusive art is just icing on the cake. I'm not sure what role Sparta will ever play in my collection, but she is an interesting part of international Joe history and makes a solid addition to any collection.

Sparta is a decent character who I wouldn't mind seeing integrated into the American line. 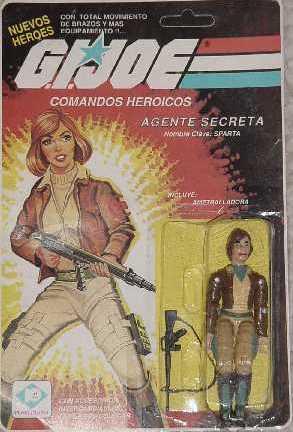