There are great Joe characters and great Joe figures. In rare cases, the two intertwine. But, more commonly, the best characters have figures that are perceived to be flawed. (Though this is likely due to increased scrutiny of those popular molds.) It is the minor characters, though, where the modern collector can find the true gems of the vintage line. The line is full of high quality molds painted in realistic colors that included great accessories but are characters about whom no one cares. Ambush is one such figure. He has a distinctive look, original accessories and colors that allow him to blend with figures from all years. Yet, he remains an unsung member of the Joe ranks.

When you really dig into it, had the 1990 figure lineup been swapped with the 1985 figure releases, they would easily be considered the pinnacle of the Joe line. While the Cobra figures aren't as strong, the 1990 Joes feature a remarkable blend of specialties, realistic paint applications and awesome accessory complements. In fact, the figures surpass the mighty '85 line in many of those respects. Where 1990 falters, though, is the strength of its characters. The '85 characters had the benefit of Joe being at the height of its popularity: including a daily cartoon in a era when such a thing was culturally significant as well as a top selling comic book. The 1990 characters lacked this media exposure. And, as such, suffer in terms of popularity for it. However, in a figure by figure comparison with characterization taken out of consideration, 1990 is probably a stronger toy lineup than the juggernaut of 1985.

Unfortunately for the 1990 figures, though, Joe is largely about the characters. This has left the 1990 figures behind in many respects. Many collectors do appreciate the 1990 figures for what they are. But, they do not hold them in anywhere near the same regard as they do characters from 1984-1987. This is unfortunate since high quality figures like Ambush are unheralded at best. But, it is also beneficial for the modern collector since this leaves many of the 1990 figures relatively low in price and highly available. Granted, it's still easier to find a mint, complete 1985 figure than it is Ambush. But, you'll pay a lot less for an Ambush and get a figure of equal quality to any of the figures from the line's early years. To me, this is the long standing value of the Joe line. If you only collect vintage Star Wars figures, you have a little over 100 total figures to track down. After that, you're off to the modern stuff. With Joe, though, you have 13 years of vintage figures to add to a collection. And, there are many great figures hidden in the '90's years.

As a figure, I've always wanted to use Ambush more than I have. For a while, he was an unaffiliated bounty hunter who used his nets to trap fugitives. That grew tiresome, though, and the figure morphed back into his intended specialty. I now use him as a bush infantryman who supports long patrols or covers less skilled soldiers. With his muttonchops, I've always pictured Ambush as having and English accent and mixing phrases like "Right-O!" and "Yes, yes, carry on." into his vernacular. From that, I kind of viewed Ambush as a more erudite grunt: a guy who had the book smarts to know what do to, but wasn't always able to apply those to practical situations. But, that's an aspect of the character I have yet to fully develop. Maybe that will give me a chance to use the figure more often. But, even if it doesn't, I still find value in Ambush as great fodder for background filler in dioramas and photos.

The highlight of all 1990 figures is the accessories and Ambush is no exception. Aside from the standard helmet and rifle, Ambush also includes 2 nets, a backpack that can hold the nets once they're rolled up, a pistol and a collapsible frame that can be used a tent or camouflage once a net is strung over it. This frame also folds up and can be carried on Ambush's pack. It is a neat little set up and one that is unique to the Ambush figure. His rifle has become less distinctive in modern times due to Hasbro's overuse of it with modern figures. But, it is still a highly distinctive weapon that perfectly fits the figure.
the Ambush figure also features a variant in the color and thickness of his cammo striping on the figure. Some are thin and faint brown while others are darker brown and thicker. It is a subtle difference and most people don't even recognize it. Neither version seems harder to find than the other and the difference is probably due to different production runs or a change in production facility.

The Ambush mold was only used by Hasbro through vintage times. After this original figure, it was highlighted in neon orange and released in the Dino Hunters set in 1993. In 2000, it was dusted off and used to make Sidetrack. After that, the head appeared in India in early 2003 on the Funksool Big Brawler figure. Then, in 2004, the body mold reappeared in the US where it was used to create the Ambush figure from the Desert Patrol set. (It seems that the head was separated from the body mold, though, as this figure featured Low Light's head.) Originally, this Ambush figure would have been a full body of desert cammo and was a figure that would have been well received. But, prior to production, the paint scheme was changed and the resulting figure was less than stellar. As such, I could still enjoy another Ambush repaint. The mold has the detail to take on additional color schemes and it hasn't been used to the point where collectors are sick of it. I'd say it's unlikely that will happen in the future, but another Ambush, well done, would be a figure I could enjoy.

If you want an Ambush figure, they aren't too tough to find. But, complete figures can be somewhat problematic and you will likey pay $8-$10 for a figure that is complete with both nets. As a figure, though, Ambush is quite good and does fit into a collection that is comprised of figures from many years. He's just another of the background Joes who gives a collection depth without offering much beyond that. Really, I don't use the figure much even though he is well done. And, that is Ambush's fate in a microcosm. But, he's still a figure I'd look to add to my collection were he not already a part of it and a figure that the modern collector can enjoy without spending a small fortune. 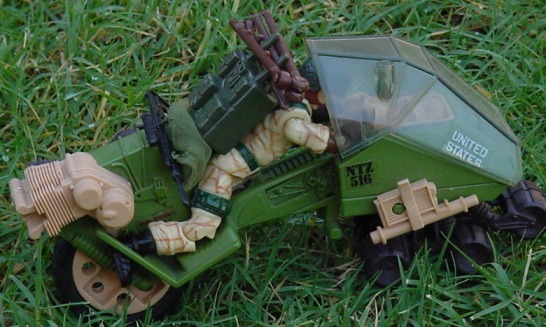 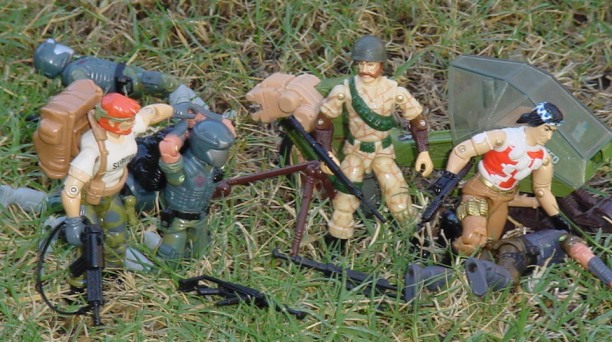 Posted by Robot_Sonic at 10:16 AM
Email ThisBlogThis!Share to TwitterShare to FacebookShare to Pinterest
Labels: 1990, Ambush