In the fall of 1986, I wandered into an endcap full of new Joe figure sets at Toys R Us.  These figures were not in the '86 catalog, but were definitely Joes.  My first impression of the Mission to Brazil set was not overly favorable.  It was mostly repaints of figures I already had.  And, they weren't great repaints.  But, there was one new figure.  Over the next few months, every trip I took to TRU resulted in me staring at the sets, watching as the endcap slowly dwindled due to Christmas shoppers.  I never got around to asking for the set.  But, my parents would have been hard pressed to not know I wanted it since every time they came to get me, I was holding one in my hands.  On Christmas morning, I found a Mission to Brazil set under the tree.  I quickly opened it and added the figures into my collection.  I had no idea how I would use multiple paint jobs of figures who were already major players in my Joe world.  But, that soon worked itself out.

Within a few days of Christmas, I determined that the repaints in the set would become army builders.  They would be soldiers with the same specialty as the characters from whom they were repainted.  But, they were nameless army builders who could die with impunity.  For the next few months, this is how these figures functioned...except one: Dial Tone.  For whatever reason, I retained this figure as a new character.  He was a sniper who used Frostbite's rifle.  He wasn't named, but he became an important player in my collection.

However, Dial Tone's existence in my collection was short lived. On a rainy day in early 1987, I was out playing with my Joes in the loft of my parents' garage.  The garage door was open and it provided a great platform from which a sniper could play an integral role in whatever adventure I was devising.  I placed Dial Tone on the door and promptly forgot about him.  I got done playing and took my Joes inside.  That night, I was sent out to close the garage doors before we went to bed.  The door went down about half way and got stuck.  I pulled and pulled to no avail.  I lifted the door back up and the cause of the jam was apparent: my Dial Tone figure.  In reality, he wasn't too bad for wear except one of his feet was broken clean off.  Unfortunately, an injury like this ended the figure for me...to a point.  A few weeks later when trying to come up with some new figures from my broken parts, I added Flint's legs to the Dial Tone upper body.  The result was awesome and this figure joined my collection as "The Lieutenant" and remained an important character for the rest of youthful Joe playing days.  That figure actually still remains in my collection.

Dial Tone is actually one of my all time favorite vintage Joe molds.  There is something about the colors, head, details, proportions and accessories that combine to make a great figure.  The brown, green and black on this version makes for a great upper body.  The red pants, though, really take the figure down a few notches.  I'm not sure why red was the color of choice.  But, it was out of the line for the time and really didn't fit with other figures from that era.  For that reason, this figure isn't that popular outside of being necessary to complete the Mission to Brazil set and the general rarity of the figure when compared to his standard retail counterpart.  This figure's accessories are identical to those of the retail figure.  But, his filecard is unique in coloring, though the text remains the same.

Dial Tone got a lot more vintage love than his predecessor, Breaker.  The figure was released twice in 1986, once in 1990 and the character got a redo in 1994.  In the modern line, Dial Tone was nearly done to death.  He appeared in 2000, as the body of the Night Rhino Dusty in 2001 and in the BJ's set in 2002.  The figure was planned to be released in a desert color scheme in 1998, but that figure was never produced.  There are between 4 and 6 of those figures that managed to slip out and the "Chocolate Chip" Dial Tone is the rarest figure in the entire history of the American line.  There are enough flavors of Dial Tone now that there is no reason for any more.  But, since this is one of my favorite molds in the entire line, I would actually welcome any repaint that's ever offered.

All of the Mission to Brazil figures are somewhat hard to find.  Of the 5 figures in the set, Dial Tone is no more popular than Leatherneck or Mainframe.  But, is definitely less popular to Wet-Suit and Claymore.  This leaves Dial Tone as a solid $22 figure.  With his real filecard, the figure may go over $30.  Were this figure not one I had owned as a child, he would likely not be worth the money.  But, the nostalgia factor alone made an updated figure a high priority for me...regardless of price. 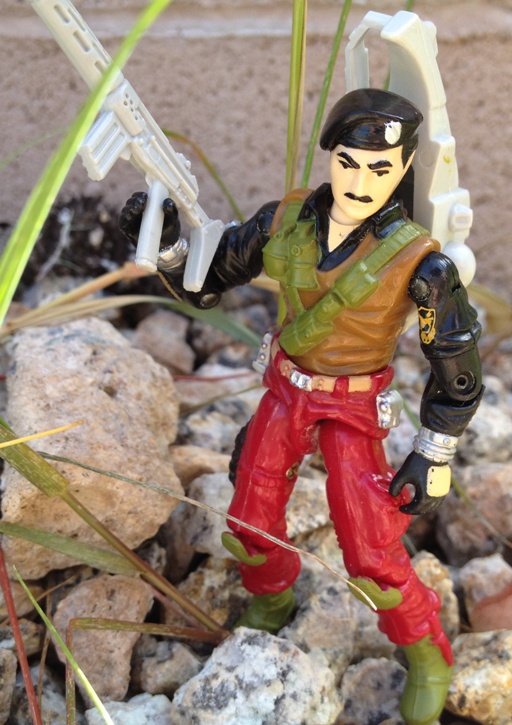 Posted by Robot_Sonic at 6:49 AM
Email ThisBlogThis!Share to TwitterShare to FacebookShare to Pinterest
Labels: 1986, Dial Tone, Dialtone, Mission to Brazil, Retailer Exclusive