In December of 1992, I wandered into a Toys R Us store for the first time in, probably, 3 years.  I went to the Joe aisle and was overwhelmed with tons of figures, all of whom were new to me.  I spent a good half hour reviewing the cardbacks and digesting the offerings available.  In the end, I decided upon 3 figures to add to my collection.  The following year, I repeated the ritual.  Again, I only acquired a couple of figures.  One of the 1993 pickups was the neon colored Bulletproof.  Mostly, I liked his gun and his helmet.

As a figure, Bulletproof reminded me of the Joes I had played with as a child.  He had nicely detailed accessories that were unique and complementary to his design.  His pack, helmet and gun were extensions of the mold rather than afterthoughts to it.  Really, 1992 was the last year in which this was largely true.  The '92 figures mostly feature newly sculpted, unique accessories.  By 1993, though, this was no longer the case as Hasbro moved more to generic weapon trees, repainted backpacks and spring loaded launchers.

Bulletproof saw immediate use in my collection as an urban assault specialist.  I used him as a army builder as well as a named character.  In the late '90's, he saw a good deal of combat against the Alley Vipers and Range Vipers who formed the backbone of my Cobra urban death squads.  But, as I acquired more and more figures, Bulletproof slowly vanished from my usage rotation.  His novelty wore off since he had been a part of my adult collection from the very beginning.  It was a somewhat sad fate for a figure of this quality.  To this day, I don't really think of the figure all that often and he rarely sees use outside of a DEF display.  Bulletproof just doesn't hold my attention like he once did.  At some point, he may come back into vogue in my collection.  But, until that happens, he remains a spectre hanging around the fringes.

As a subset, the figures in the DEF are quite good.  They all feature new, highly detailed molds, excellent accessories and sane colors.  Based on that, how could the set go wrong?  The answer was simple, Hasbro raised the price point on the figures due to the spring loaded weapons.  Sure, they hid this under a larger card.  But, when faced with a choice of what to buy, parents simply weren't convinced that the extra dollar was worth.  So, the line only lived one year and the planned 1993 repaints and new figures were just rolled into the basic figure line.

But, if you look deeper, you see that this figure does show the beginnings of troubling trends for the line.  Bulletproof only used 2 colors on the main body and only has one paint application.  While the green and beige are an excellent combination, the figure lacks the details that brought forth the quality of the Joe molds.  If the figure featured a few extra colored paint details, it would be on par with vintage figures.  But, this lack of paint applications does knock the figure down a bit.  Bulletproof's head mold is also a bit...dated.  The box haircut may have been acceptable in 1992.  But, 20 years later it is as out of place as the Dreadnoks.  It is definitely an interesting piece from a historical perspective.  At least the helmet covers it up.

The code name of Bulletproof was originally used in the C.O.P.S. line.  The C.O.P.S. character was also black.  But, I think that the connection between that character and this one is limited at best.  More likely, Hasbro re-used the name so they either would not lose the copyright on it or because it had already cleared legal and it was cheaper to resurrect than it was to come up with a new name.  As many collectors also have an interest in the C.O.P.S. line, the shared name is sometimes thought to be more than a coincidence.  But, I doubt it was really anything more than a cost saving move on the part of Hasbro.

The Bulletproof mold was used in the US in 1992 and 1993.  From there, the figure appeared in Brazil as Tiro Certo.  Tiro Certo uses colors close to the 1993 Bulletproof with one glaring distinction: the Brazilian figure is Caucasian.  While the figure mold appears to have either died in Brazil or simply wasn't resurrected by Hasbro, the helmet did appear in the US in 1995 as part of the Mortal Combat movie line where it was released in black with the Night Fighter Guile figure.  But, since the helmet was not released in Brazil, it is impossible to know for sure if the mold ever made it's way back into Hasbro's hands.  Truthfully, this figure could be repainted in a variety of ways that would make for a quality release.  But, even customizers seem to avoid the mold and you rarely see new takes on the Bulletproof character.

Bulletproof is not terribly hard to find.  Even though he has a microphone, the figure remains easy to complete and inexpensive.  You can still buy carded versions of this figure for $8-$12.  That's remarkably cheap for the quality of the figure and the range of accessories he includes.  There was a time a few years ago when all the DEF figures were quite the rage.  But, that seems to have subsided quite a bit.  If you waited to fill these gaps in your collection, it probably saved you a bit of money.  But, I find this Bulletproof to be such a valuable addition to a collection that missing him for years for the sake of saving a couple bucks would not have been worth it.  This is a solid figure who is definitely worth the money and time it takes to acquire him. 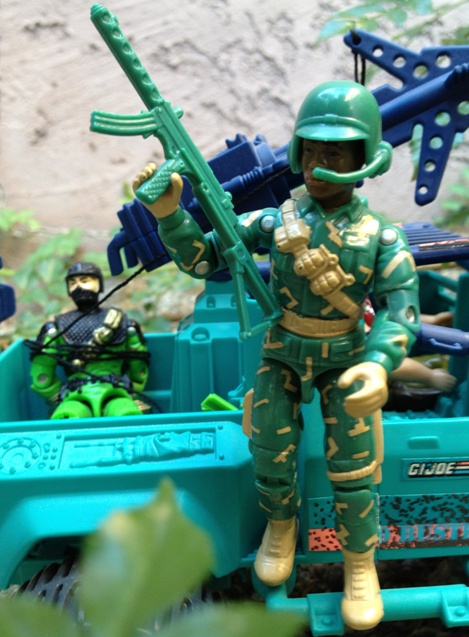 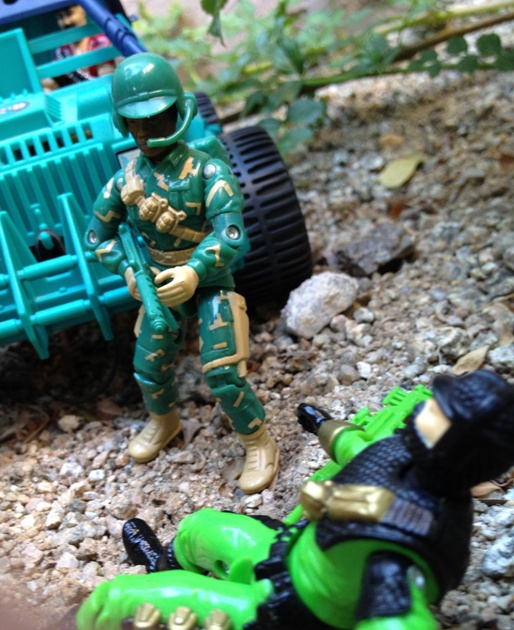 Posted by Robot_Sonic at 11:13 AM
Email ThisBlogThis!Share to TwitterShare to FacebookShare to Pinterest
Labels: 1992, Bullet Proof, Bulletproof, DEF