Eco Warriors are not the most popular Joe subset.  Really, far from it.  But, over the past 15 years, Eco Warriors have turned from a joke into something that most collectors can at least appreciate on some level.  The grim realities of the modern world have made chemical and biological warfare front page news rather than politically correct environmentalism.  As such, Eco Warriors have found a niche in the Joe world.  The bright colors of many of the Joes and Cobras from the set, though, still make them difficult to use.  However, the Cobra leader of the Eco Warriors has found a home in many collections.  The high quality and acceptable colors of Cesspool have given him a status in the Joe world not achieved by other members of his subset.  As such, he is worth a detailed look.

While I basically quit buying Joe toys in early 1988, I still purchased the comic book on a regular basis.  I kept up with the comic through almost the entire run: missing about 6 months in 1989.  One of the comics from the '90's that most stands out to me was the Cesspool/Eco Warriors story arc.  While it was somewhat over the top, my lasting memory is the bony fingers of a Toxo-Viper  protruding from the ooze after his skin was dissolved away after falling into a vat of toxic sludge.  The notion of working with chemicals capable of eating a man alive was a macabre vision of how terrible Cobra could be.

The center of that story was Cesspool.  A pre-Enron evil corporate titan who mutated himself into a maniacal super villain after being exposed to toxic waste.  Re-reading the story, Cesspool largely seemed to be a throw away character designed to sell toys.  But, the roots of a useful Cobra character are here.  Taking away some of the "toxic sludge made me crazy" angle, you are left with just the type of individual that Cobra would welcome into their ranks.  Cesspool was a highly successful businessman, even if he had no scruples.  Really, that's no different than Cobra Commander's origins.  Cesspool had the ability to create weapons and was also adept at making profit.  Both of these fit with Cobra's stated goals throughout the Marvel comic run and the vintage filecards.  As such, you have a character who really fits with Cobra and is very easy to integrate, even if you don't have an interest in the Eco Warriors angle.

Oddly, Cesspool's filename is that of a real Hasbro executive that oversaw the G.I. Joe division at the time.  Today, a corporate executive affixing their name to a character who was an evil businessperson would invite a real life SEC investigation.  In 1991, that threat was less so.  But, it is odd to see a real person's name attached to a Cobra character.  Many Joes had real life filenames and even likenesses.  But, it was rare for a Cobra and is another interesting footnote to the Cesspool character.

Originally, I used Cesspool as a Cobra pilot.  The helmet is just perfect for an evil aviator.  Plus, inside a Cobra aircraft, Cesspool's colors weren't as garish.  However, shortly after I acquired my first Cesspool, I abandoned this plan.  I found that I liked the figure enough for him to have other responsibilities.  So, I found other Cobra pilots and used Cesspool more for his intended specialty.  The well done sculpt combined with the characterization kept the figure around and allowed him to remain a player in my collection.

The Cesspool mold is one of the better sculpting jobs you will see in the vintage Joe line.  One arm is molded chain mail and he has adornments that frame the sculpted Cobra logo on his chest.  The legs are well done and combine well with the torso.  The entire mold is finely detailed.  The real attraction, though, is the head.  Cesspool features a molded on scar to showcase the damage done by his plasmatox.  This facial scarring was made all the more poignant by the sliver of red paint inserted into it.  You can really see how deep this scar must run and it is a perfect way to bring to light the damage described on the figure's filecard.  After Cesspool, Hasbro stepped up their facial sculpting, especially with damaged figures.  You can see it on the Toxo Zombie and the unproduced 1995 Dr. Mindbender figures.

Cesspool's accessories are well done, to a point.  He includes the terrible water launchers that were standard with all Eco Warriors.  However, the pack and weapon aren't as bad as I remembered.  The gun is actually somewhat in scale for the figure.  The pack, while quaint by today's standards, was a sharp piece of toy engineering in 1991.  Having water shooting weapons paired with figures who changed color when hit with said water is actually a feature that can have some uses.  Cesspool's real value lies in his helmet.  It fits perfectly on his head.  The helmet is complete with a removable re breather (which is often lost) that gives it a much more refined look than many single piece helmets.  Cesspool also includes a golden chainsaw.  It is oversized and nowhere near as detailed as that from Buzzer.  But, it is definitely unique to Cesspool and helps characterize him.

The Cesspool mold was just used this one time in the U.S.  The mold, though, became quite popular in Brazil.  Estrela used the mold on three different figures in their line: two of whom are among the most famous foreign Cobra ever released.  Estrela released five unique Forca Eco figures.  Four of them were Brazilian exclusive Frankensteins of various figures.  The fifth was a straight repaint of Cesspool named Poluicao.  The truly exciting use of the mold, though, came in the Patrulha do Ar (Sky Patrol) subset. Here, the Cesspool body was colored in black, given a Caucasian Dee Jay head and renamed Abutre Negro (Black Vulture).  Not to be outdone, though, Cesspool's head was made African American and slapped on a combo of Recoil and Scoop and named the Escorpiao Voador (Cobra Flying Scorpion).  These two figures take the Cesspool mold and show how proper repainting and slight part modification can make a figure mold completely unrecognizable and amazingly new.  After the Brazilian releases, the mold disappeared.  None of the Sky Patrol or Eco Warriors molds from Brazil ever appeared again in the U.S.  It is too bad as a modern repaint of Cesspool could have been amazing.  But, collectors are left with enough to track down that they can't feel the mold was wasted by Hasbro.

At one time, my entire Cobra world centered around their development of biological and chemical weapons.  Figures like Cesspool, Letal and Corrosao were staples of my Cobra army.  Legions of Toxo Vipers followed them on their quest to build bigger and more fearsome weapons.  Now, though, those days are gone.  While I still appreciate figures like Cesspool for his quality, he is no longer the focus of my Cobra collection.  Now, my focus remains on more of the classic, pre 1986 Cobras rather than the more technological villains who came in the line's later years.  As such, Cesspool's star has faded.  He is now securely packed away with other figure's from his year.  Some day, I could see him appearing on display.  But only if the space available to me has already allowed for all of the 1985 and earlier items to be prominently showcased.  But, Cesspool still has that nostalgic tinge to him.

Cesspool figures have gotten somewhat popular in recent years.  The lower production run, high quality of the figure, greater world importance on chemical warfare and his uses on the Brazilian figures have given him some cachet in the collecting world.  Today, mint and complete with filecard Cesspools can run over $15.  That's fairly pricey for a figure that was once considered terrible.  But, he is worth the price.  This is a great figure with a distinct look.  His coloring is acceptable within the Cobra ranks and he fills a specialty that any modern terrorist organization would consider among the most important weapons in their arsenal.  Not bad for something conjured up 22 years ago. 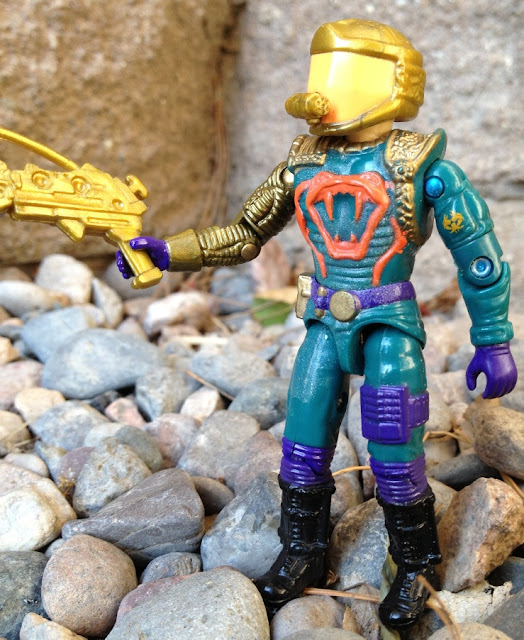 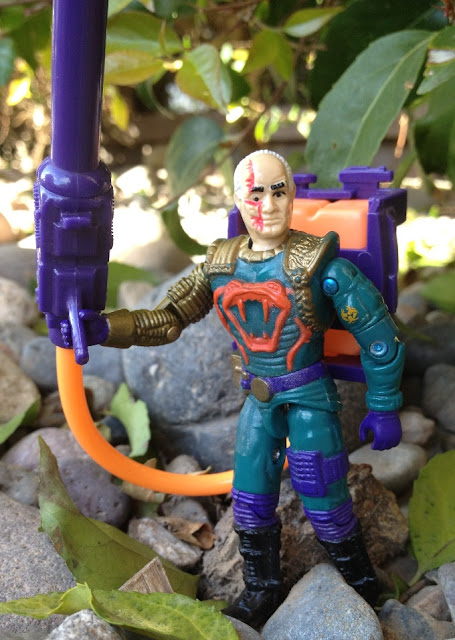 Posted by Robot_Sonic at 11:55 AM
Email ThisBlogThis!Share to TwitterShare to FacebookShare to Pinterest
Labels: 1991, Cesspool, Eco Warriors