In the mid 1990's, there were still some G.I. Joe figures hanging around at various retail outlets.  Most of them were the less desirable figures from the 1992 though 1994 assortments.  But, you could find gems from time to time.  During that era, I purchased pretty much every figure I found at retail.  Every now and then, though, there was a figure that was just too terrible for even me to buy.  These were mostly things like the Shadow Ninjas or Star Brigade Armor Tech or higher price point figures like the Mega Marines.  There was one standard carded figure, though, that I could not bring myself to every buy: the 1993 Night Creeper Leader.  This figure was just about everywhere.  But, the bare chested, tiger striped orange monstrosity simply never sat right with me.  I could not come up with any possible use for the figure.  So, I left him behind.  Years later, I found that the figure was repainted in 1994.  This purple and yellow incarnation wasn't much better than the Tigger the Tiger inspired 1993.  But, for some reason, I wanted him.

I spent several months searching for this figure, but could not find one anywhere.  No dealers had one, there were none posted on the online auction sites.  Basically, you couldn't find this figure.  I searched for months to no avail.  While it's hard to imagine now in the late 1990's, 1994 figures were difficult to track down in general and the repaints of 1993 characters were especially difficult to acquire.  That didn't mean the figure was expensive: far from it in most cases.  But, it was frustrating to track down.  I ended having to purchase a carded version of the figure from a seller in Asia.  He was selling Funskool figures (which, at that time, were only available from Asian sellers directly) as well as some obscure 1993 and 1994 figures.  Since I had spent a year unable to find one of these figures in the U.S., I bit the bullet and just ordered the figure from Asia.

Once I had the figure, though, he stayed carded for a few years.  I simply never got around to opening him as the figure was obtained for completion's sake rather than true desire to own.  In the early 2000's, I got around to opening the figure up and found his about as I had anticipated: mostly useless.  The sculpt and specialty didn't fit with my collecting goals at the time and the colors just didn't mesh even with the Night Creepers who still had a bit of home in my Joe world.  As time passed and my collection focus changed, it never came around to the Night Creeper Leader.  I don't really use ninjas at all in my collection and I mostly find the figures of them (especially those from the '90's) to be poor in relation to the contemporaries released at the time.  So, the Night Creeper Leader stays tucked in a bag, in a box, in a closet.  Some day, he may join a full display of 1994 Joes.  Until then, this is likely the last time he will escape from his baggie for a breath of fresh air.

At it's core, the figure is just purple and yellow with a splash of easily rubbed away gold paint on the top of the figure's head.  The mold details are fairly well sculpted.  But, the figure being bare chested really limits it's potential.  Had they sculpted or painted a shirt, the figure might be more useful.  Still, the straps on the figure's chest hold grenades (which don't seem like the most ninja weapon to me...), a knife and a throwing star.  They are actually painted a different color than the straps.  Granted, that color is purple, but it's more than other 1994 figures were treated to.  The figure features another knife and more grenades on his wrists.  (Really, he has more grenades than anything else.)  The pants feature no additional trappings.  But, the figure's face is sculpted into a hardened scowl.  The facial sculpting of the Joe line really progressed in the final years.  And, were it not for the mask with no eye slits, the Night Creeper Leader's head might be more preferred among customizers today due to the level of detail.

As a character, the Night Creeper Leader is basically no one.  He appeared in one issue of the comic as a foil to Snake Eyes who was defeated soundly.  Really, he is still a blank slate.  I suppose he could be used as Aleph, the leader of the Night Creepers in the comic.  But, Aleph had a cool design.  This guy does not.  The biggest characterization he was given is that the character covers his eyes.  You will notice his eye mask has not holes through which he can see.  These would be unnecessary for a blind man.  I suppose this was Hasbro's way of incorporating some of Larry Hama's ninja mystique into the line.  I get what they were going at.  But, it all just seems a little much.  Leaving him as the leader of a cool sub faction of Cobra would have been good enough.  The "I'm so such an awesome ninja that I don't need to see!" seems a bit forced.  But, if not for that, this guy would be just another member of the ninja overkill that saturated the final 3 years of the vintage line.

For accessories, the Night Creeper Leader is actually decked out nicely...especially when you consider that he doesn't have an original weapon in the lot.  His golden tree included 2 well done ninja swords that form the backbone of his arsenal.  Also included is the wrist crossbow from Road Pig.  It's not the greatest accessory in the world.  But, at it least it fits within the ninja context.  He also includes a golden version of the classic Night Creeper crossbow.  This at least gives him some continuity within his ranks and allows him to be identified with the Night Creepers...even if his mold does not.  He is completed with a spiked arm shield and a wicked "lightning" knife.  All told, it's a well thought out complement to the figure that fits his specialty.  The golden color even works for the swords.  (Though the pads and crossbow are a bit of a stretch.)

The Night Creeper Leader mold was rarely used.  While the pants and waist are from the 1990 Night Creeper that was used 3 times in the U.S., the rest of the figure is new.  But, being a late release, the new parts never appeared again in the U.S. or any other part of the world.  It is likely that Hasbro had access to the mold during the repaint era.  But, collector disinterest in the mold likely never made it a viable candidate for re-release.  Still, the mold has potential and could have been used in the Convention Dreadnok Set.  Beyond that, though, there is really no reason to see this mold return.

Today, 1994 Night Creeper Leaders aren't difficult to track down.  The supply that was locked away 15 years ago has come out and is readily available.  Carded, this figure can be purchased for under $10 each.  For that price, there's no reason to not acquire a sample.  Even if the figure isn't great, he is worth that type of cheap price.  I'm glad I picked this guy up all those years ago.  He's not the abomination that defines his original, orange version.  But, he's not great, either.  Interspersed with a full display of the 1994 figures, though, the Night Creeper Leader does fit right in.  (And, that's not an insult!)  For what it costs to acquire him today, this limited use is still worth the outlay. 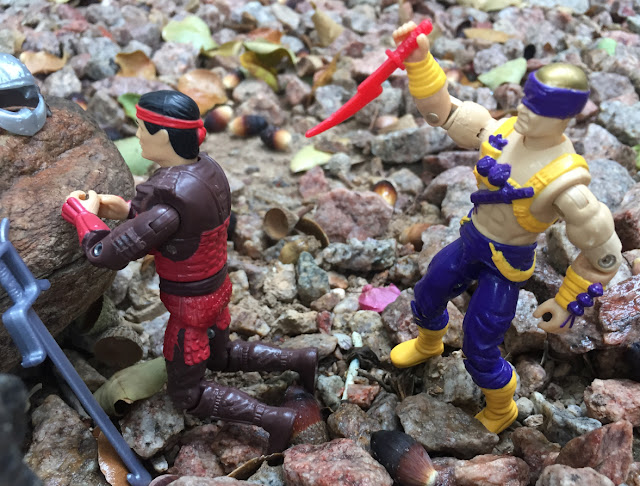 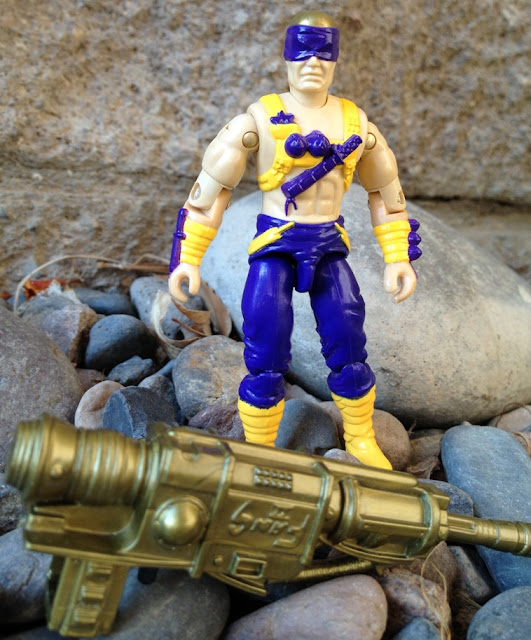