Throughout my childhood years, there were many tales of figures who simply disappeared from my collection and were never seen again. I was usually very careful with my figures, so it wasn't a matter of careless misplacement. Some might have been inadvertently taken home by a friend. Others may have been stolen by my brothers. But, from time to time, figures just disappeared. However, the opposite of that was also true. Every so often, a figure would show up at our house with no explanation. The most glaring examples of this occurred after I had stopped playing with toys. I suspect that one of my brother's friends had brought the figure over and left it behind. In other instances, neighbor kids may have been playing in our yard and left their toys. Whatever the source, though, occasional figures would appear with no definitive information as to their origin. One such figure was Salvo. At some point in the early 1990's, a figure with his helmet appeared in our toy room. I looked him over and was impressed not only with the mold design, but also the excellently done helmet. So, when the time came, I rescued Salvo from the toy room floor and stowed away with my other figures I had saved.

The Salvo mold is rather simple. While the legs are well detailed with the array of ammunition, the upper body is little more than a t-shirt. From a practical standpoint, this doesn't make much sense. Seeing the figure wearing a backpack, though, makes even less sense. But, sometimes a toy is about being a toy and obvious errors can be forgiven due to generally cool overall design. Still, though, Salvo would have benefited from some web gear on his upper body. Whether molded or removable (like Outback's), some additional details would have gone a long to improving the figure.

Salvo's accessories are plentiful and interesting. His full complement of gear was in line with the over-accessorized frenzy that was the 1990 Joe line. Some of the launchers and weapons lack practicality. But, the look is still strong enough that the figure stands out from many of his contemporaries. The brown shoulder launcher is large, but well detailed. Salvo's gun is completely bizarre. But, the inclusion of layable land mines as part of the overall weapon is something very different and a neat little add on for the figure. Of course, the highlight of Salvo is the tight fitting helmet with painted silver visor. It fits better than most helmets in the line and showed that Hasbro was capable of making high quality removable helmets. The final overlooked piece of Salvo's arsenal is a briefcase. This accessory appeared many more times in the line in subsequent years. It was, at one time, the accessory du jour for customizers creating Crimson Twins or civilian Cobra Commanders. For Salvo, it doesn't bring a lot of value. But, it's nice to have around for other figures.

In my collection, Salvo's role has evolved. In the late 1990's, the figure was my Joe army builder of choice. Outfitted with a Tiger Force Flint backpack and a Sonic Fighters Lamprey's black version of Spearhead's gun, the figure was a basic infantry trooper who fought against the Cobra legions. He remained in this role until 2000 when Dusty and then Mirage figures replaced him in this role. From there, Salvo became more of himself. I ditched the add on accessories and returned the figure to his true role. His bulky weapons made him ill suited for an infantry patrol. But, he was the perfect crewman on an APC, Havoc or Monster Blaster APC. Today, that is still his primary duty. The figure, though, gets much less than he did a decade and a half ago. But, that's how my collection tends to be: with figures ebbing and flowing in and out of popularity as time goes on.

Salvo's shirt carries the slogan "The Right of Might".  In and of itself, this isn't anything particularly special.  However, there is book published in the 1890's entitled "Might is Right".  Where it gets interesting is that this book , published in 1890: 100 years before Salvo's release, is heavily influential in modern Satanism.  Could Salvo's shirt have been a subtle occult reference?  It seems a bit much...until you really look at some of the themes in Joe.  Serpentor was basically about raising the dead.  Crystal Ball's character was written by Stephen King.  Cobra La included references to mythical, evil creatures.  So, there are definitely some dark themes that pervade the Joe world. Personally, I don't think there's anything to it. But, it's a fun reference for Joe collectors.

The Salvo mold was used for this figure only in the vintage Joe line. In late 1994/early 1995, the entire body mold was used for the Street Fighter Movie Balrog figure. (This is actually a pretty nice villain figure done in blue and white.) In 2003, Hasbro slapped collectors in the face when the released the body with a Low Light head as the Tiger Force Big Brawler. A recolored Brawler showed up in 2004, too. So, Hasbro had the body mold during the repaint era, but chose to not use it for a re-done Salvo figure. It's a terrible waste of a good mold as collectors generally ridiculed the Big Brawler figure, but would have welcomed a new Salvo...even if it were only as part of Tiger Force. But, the repaint era is marked by missed opportunities and poor figure choices. Being so close to getting a new Salvo, though, makes him sting a bit more than most of the other errors from the time.

Salvo figures are not cheap. Being prone to paint wear on the gold bullets and eyebrows as well as including a large volume of accessories has put a premium on genuinely mint and complete figures. Top conditioned Salvos sell in the $11-$13 range and will sometimes range upwards of $15. For an obscure Joe character who debuted in the 1990's, that's a fairly high price tag. But, the figure is worth it. The great helmet, solid design and cool colors all combine into a package that every collection needs. Many of the figures from the 1990's are easily on par with releases from 1985. Salvo is no exception. It seems that collectors are finally realizing the quality of many later figures and giving them their due. 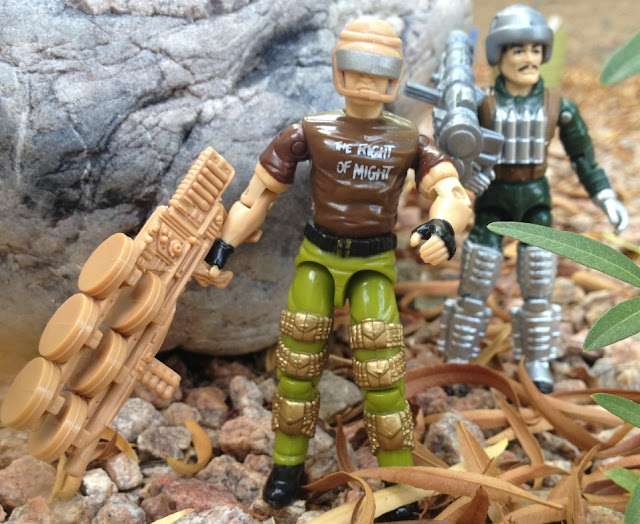 Posted by Robot_Sonic at 10:08 AM
Email ThisBlogThis!Share to TwitterShare to FacebookShare to Pinterest
Labels: 1990, Salvo