In early December of 1998, I went into a Toys R Us store on a rainy Saturday afternoon.  I was mostly looking for Star Wars figures, but figured I might stumble upon the newly released G.I. Joe exclusives as well.  Sure enough, I hit the jackpot and found most of the 1998 figures hanging on the shelf. I then proceeded to wait in line for nearly 45 minutes as the busy store struggled to check out the massive throng of Christmas shoppers. In that time, I looked over the figures and anticipated getting them home and opened up. Of course, the reason I was at TRU during the rain storm was because I was moving that day from one apartment to another and the rain had gotten so heavy that it was no longer practical to carry all of my belongings from one side of the building to the other. So, even when I got the figures home, they were left in the package until I finished the move.

As soon as I opened the 1998 Cobra Troopers, I knew it was a special set. The figures were of excellent quality, far above the 1997 releases. They were in classic Cobra colors and included excellent accessories that fit the figure well. Really, they were everything that a collector could have wanted from a $10, 3 figure set that was available at retail stores. The paint masks were nothing short of remarkable with layered silver and golden highlights that helped offset the black on blue base. Every strap and molded piece of gear is highlighted in accent paint to let the power of the mold stand out from the base. Even the figure's collar features a two tone paint application that starts with gold framing the faceplate but then turns to silver as it wraps around the figure's head. This figure proved that Hasbro did know how to make figures geared for the collector market and was willing to go the extra mile to make something spectacular. It's very odd that they were willing to do this for a retailer exclusive line in 1998, but a full retail line just two years later already saw cost cutting and skimping.

When these Cobra Troopers debuted, their inclusion of recolored 1991 Dusty accessories was rather inspired. At the time, the 1991 Dusty was fairly obscure and somewhat difficult to find. So, the rifle, stock, pack and pistol weren't overly familiar with collectors. The pack was a field pack in a similar vein to the original Viper backpack. The rifle with the removable, folding stock was a great fit for the figures and brought some depth to the accessories. The pistols were somewhat superfluous. But, collectors weren't going to care that their Cobra army builders included too many weapons. In the years after this figure's release, though, the rifle, pistol and backpack were used ad naseum by Hasbro: interchanging the weapons with both Joes and Cobras. That subsequent use sucked the uniqueness of this accessory from the 1998 Cobra Trooper. But, the complement of weapons, at the time, was something that gave this figure more character and helped to differentiate it from the standard Viper gear.

In the early 2000's, army building was the meat of the Joe collecting world.  Large armies were in vogue and many people saw the size of the army as a measure of the collection.  It was a silly time in a lot of ways, but it was easy to get caught up in the hype.  Hasbro was part of the machine and they churned out army builders in droves.  Some were OK, a lot were terrible and a few were really well done.  Given years of perspective, though, I find it amazing that the first real army builders targeted for collectors were not only the best combination of paint, accessories and mold, but they were also the cheapest way for collectors to build a decent sized army. It would be a full 5 years before Hasbro would once again issue a retail release with multiple army builders. And, it took until 2004 for Hasbro to finally come back to their lost understanding that army building sets geared towards collectors were a smart product move.

The 1998 Joe figures actually saw three distinct production runs. The first was late 1998 and those were the figures shipped for the holidays of that year. Most of these sold through with a few straggling Oktober Guard and Diver packs left behind. In the early part of 1999, all of Hasbro's action figure production facilities were dedicated to producing toys for Star Wars Episode I. It's comical now. But, at the time, there was fear that no amount of toys would be enough to sate the huge demand that the hit movie was sure to create. (Oops....) After the Episode I toys were made, though, Hasbro ran another smaller batch of G.I. Joe figures. These hit the stores in the summer of 1999. There weren't many and the Cobras sold through pretty quickly. But, the sales were strong enough that Toys R Us had one final production run that was shipped in time for the 1999 holiday season. This final batch of figures stuck around a while longer and many collectors bought extra army builders because they could and there was no indication at the time that we would ever see Joes at retail again. By early 2000, though, the Cobras were gone from retail. As that year wore on and the A Real American Hero Collection came to retail, the 1998 Cobras became more and more sought after. (The same was not true of the Joes, many of which were still hanging on TRU shelves well into 2001.) By 2001, collector demand for army builders was nearing its crescendo and the 1998 Cobras were more expensive to purchase than a mint, complete with filecard Starduster figure.

This figure basically has three flaws. First, is the flat rear end that was a function of Hasbro removing the Funskool copyright information from the BAT mold. The second is the golden faceplate. Most collectors would have preferred a silver faceplate to keep the figure more in line with the vintage Viper. However, this is largely forgivable as the gold is an acceptable alternative. The final flaw is that this figure has no Cobra logo anywhere on his uniform. For whatever reason, Cobra always liked to advertise their members. (That probably made it easy for witnesses to identify the perpetrators of any crime, but Cobra Commander was always a bit of an egomaniac.) Neither the Cobra Trooper nor the Cobra Officer, though, feature Cobra sigils anywhere on their uniforms. In 2002, Master Collector reused the 1998 paint masks for their Crimson Vipers. However, they added in a Cobra logo. In a lot of ways, I don't miss the Cobra logo on these figures. But, it is a flaw that many bothered many collectors at the time of this figure's release.

The Viper mold was used three times in the vintage line: 1986, 1989 and 1990. The legs and waist, though, were cannibalized by Hasbro for use on the 1993 Dr. Mindbender figure. That Dr. Mindbender was then sent to Brazil after his American release was done and the original Viper legs went with him. In 1997, Hasbro introduced this incarnation of the Viper that used the waist and legs from the V1 BAT figure. That same mold was used in 1998 for the figures in this Cobra Infantry Team, 2002 for the Convention Crimson and Fuchsia Vipers as well as the 2 Vipers that were sold at retail and 2003 as the Venom Cycle driver and the Viper released at retail. A third version of the Viper was released in 2006 when Hasbro remolded the thighs for the Viper and released them in colors similar to the original Viper in the overproduced and uninspired Viper Pit set. Despite a rainbow of Viper colors available, the mold was never done in arctic theme nor a desert motif. As such, there are still glaring holes in the vintage Viper releases, even though we have them in green, purple, pink, maroon and red.

In the mid 2000's, mint and complete 1998 Cobra Troopers sold for between $20-$25 each.  Carded sets sold for $60 or more.  Collectors were desperate for high quality troops and were willing and able to pay high dollar amounts for them.  Slowly, though, the army building craze subsided a bit.  Mostly, Hasbro made so many army builders that just buying one or two of each unique figure left a collector with a decent army.  But, collectors also saw their collection size balloon as they bought dozens of dozens of different figures.  As such, much of the demand has been taken from the army building world.  Collectors still build armies, but they are more judicious and there are so many alternatives that, usually, the only army builders who still command a premium over their pricing from 6-8 years ago are those that are either extremely rare or have yet to be redone in either a vintage remake or a modern reinterpretation.  As this Cobra Trooper fits neither criteria, the price is now less than half the quoted numbers above.

Really, though, this is a great thing.  For $8 or so, this is a figure worth acquiring again and again.  It is one of the best army building figures Hasbro ever released. I see the figure as the backbone of any Cobra army. While it's not the original Viper colors, it's close enough that these figures can be combined with the classic figure without any loss of integrity for either figure. The basic Cobra blue works with all the relevant Cobra vehicles and these figures look great on Stingers, Hiss Tanks or as the lone operator of smaller vehicles. The collecting world has somewhat left these figures behind, but I have not. I still consider them to be the mainstays of my Cobra army and they are among the few figures whose numbers remained intact as I sold off large chunks of my collection. This is a figure worthy of a heralded place in the line's history. And, 15 years to the day when I first acquired one, I still feel that figure is one of Hasbro's best efforts.

As a side note, I looked back at my old usenet postings and found the confirmation of the exact day when I first acquired this figure: December 5, 1998. As such, this profile was published 15 years to the day from the time I first acquired a version. It's amazing that, at the time, figures that were 15 years older than this figure, were classic 1983's from my childhood. It's hard to believe that this figure was released that long ago. But, it shows that the Joe line can endure and that collecting can survive lulls, hiatuses, movie flops and complete changes of direction from Hasbro. 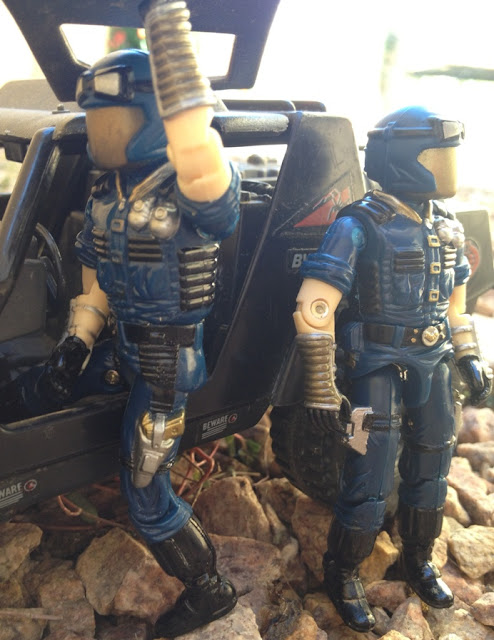 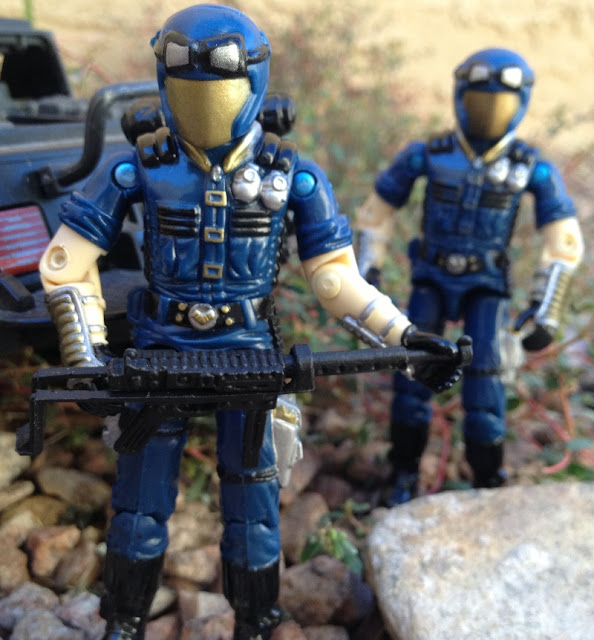 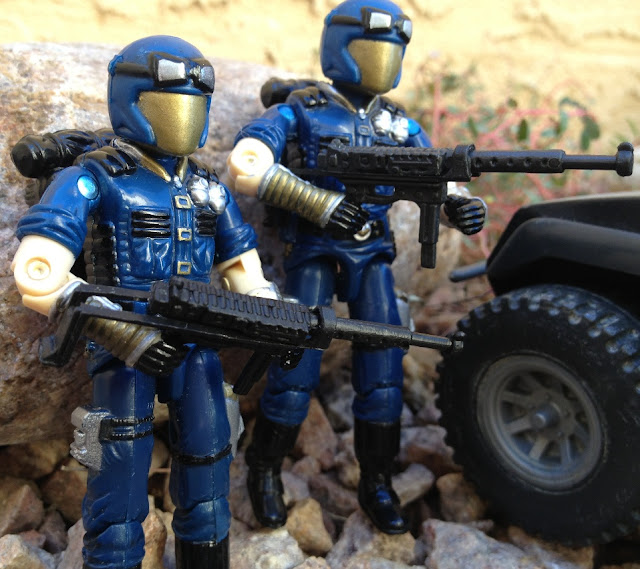 Posted by Robot_Sonic at 10:14 AM
Email ThisBlogThis!Share to TwitterShare to FacebookShare to Pinterest
Labels: 1998, Cobra Trooper, Retailer Exclusive